Romney bashes Obama for "making us like Europe." But he's the one pushing failed European austerity measures 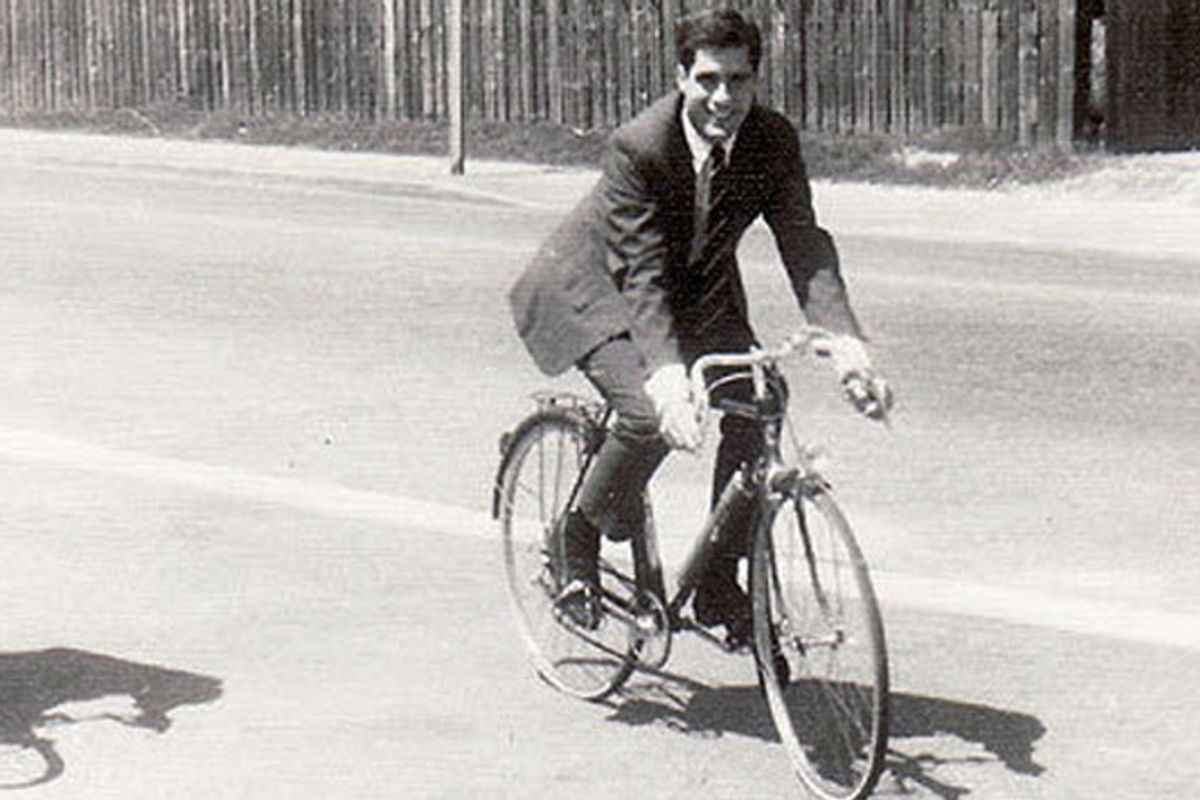 A young Romney rides a bicycle in France. (André Salarnier)
--

An odd thing happened during Mitt Romney's victory-lap speech after Tuesday's Republican primaries: He didn't once mention the word "Europe."

The absence was jarring, because Romney's claim that President Obama is dragging the United States toward a loathsome European-style "social welfare" future has been a staple of the former Massachusetts governor's shtick ever since he started campaigning in earnest.

It's always been an easy line for him: Europe, Romney's audience understands, is the land of the not-free. The continent gave birth to Karl Marx, for crying out loud! Every now and then, socialist political parties actually take power!

But there is a big problem with Romney's formulation. For the last year or two, Europe has been implementing, in real time, exactly the policies that Romney and congressional Republicans fervently believe are the best strategy for boosting economic growth. It's called "austerity," and it means cutting deficits, slashing spending, and chipping away at all those goodies the social welfare state provides.

And guess what? It's not working. Compared with the United States, Europe is in shambles. Unemployment is rising across the continent. Just this week, the United Kingdom, which has pursued an austerity regime so severe that it makes House Republicans drool with lust, slipped back into recession. In France, the socialist candidate for president (and likely winner), François Hollande, has been campaigning against austerity. Italy's prime minister, Mario Monti, is expressing qualms. The latest news out of Brussels, according to the Daily Telegraph, suggests "a major shift in economic strategy" as fears spread "that excessive fiscal tightening will inflict unnecessary damage on a string of eurozone countries."

The evidence keeps amassing. Maybe, just maybe, John Maynard Keynes was right: Cutting government spending in the face of a weak economy is a recipe for further decline. In a startling turnabout, political leaders all over Europe are questioning the merits of austerity and calling for more stimulative policies.

You can see the problem Romney faces, and why he might suddenly be reluctant to utter the word "Europe." The facts are uncomfortable: Under Obama, the United States has recovered more quickly from the Great Recession than has Europe. Economic growth is steadier, and unemployment is falling faster. But if Romney wins the White House, bringing along with him Republican majorities in both the Senate and the House, he will have the power to do exactly what he says he wants to do: slash government spending and cut the deficit.

It's a plan that runs the very real risk of sabotaging the economic recovery. It's a plan, in other words, that would make the U.S. just like Europe.

Romney's efforts to tar Obama as a fifth columnist for French-accented Really Big Government have been unrelenting. In December, he told voters in Iowa that Obama's polices "were making us like Europe," and "I don't want Europe here." In January, after winning the New Hampshire primary, he lambasted Obama for wanting "to turn America into a European-style entitlement society." Just a few days ago, he explained to Fox News that the conservative base would rally behind his candidacy, because "President Obama has taken America in such a different course than we have ever gone as a nation before. We are becoming far more like a European social-welfare state, and people don't want to see that."

Never mind that by historical standards Obama's efforts to strengthen the American safety net do not come close to the transformational efforts of presidents like Franklin Roosevelt and Lyndon Johnson, making Romney's assertion that Obama is taking America on "such a different course than we have ever gone as a nation before" transparently ridiculous. If anyone running for president this year in the United States is a pioneer in European-style liberalism, it's got to be Romney, the first governor to preside over the creation of a statewide universal healthcare plan. (And for a guy who seems to despise Europe so much, Romney sure seems to enjoy vacationing in France.)

But whatever. Romney's Europe-bashing rhetoric serves multiple purposes. It labels Obama as something different, a "foreigner," un-American. It also directly appeals to conservative concerns that the social welfare state is unaffordable. In this vein, unless governments everywhere tighten their belts, balance their budgets and get their ships in order, we're all headed down the hopeless path of Greece, doomed to bankruptcy and social chaos.

Most importantly, Romney's opposition to European-style Big Government stakes an implicit position on the great economic debate of our time: How best to spur economic growth?

The stances of the two main camps have been clear for years and endlessly debated by economists and pundits. The pro-stimulus, Keynesian argument holds that the problem afflicting stagnant economies all over the world is a lack of demand. When everyone is worried about their economic future, everyone simultaneously tightens their belt, and the capitalist machine stops in its tracks. Since no one is willing to buy anything, companies can't sell their goods and services and respond by laying off their employees, and that further exacerbates the overall problem. Under such constraints, only the government has the power to step in and stimulate demand. Once the economy is growing strongly and consistently, only then do you look for ways to balance the budget -- a task that becomes much easier when tax revenues are booming again.

The opposing camp, now commonly referred to as "Austerians," believes the problem isn't a lack of demand, but a lack of confidence. People are afraid to invest and buy and take risks because they're worried that high deficits inevitably lead to high taxes, or high interest rates, or general fiscal chaos (or all of the above). And they're going to hunker down until they're sure that governments intend to act responsibly, and live within their means.

The Austerian camp's stance translated into one of the most delightfully mindbendingly oxymoronic proposals to enter the economic policy parlance in years: "expansionary fiscal contraction." Cutting government spending will boost confidence, which will lead to growth! To get big, one must first get small.

It was all the rage two years ago. Today, not so much. The problem with expansionary fiscal contraction is that when you try it at a time when the economy is stagnant or recessionary, you run a real risk of exacerbating the problem you are trying to cure. Slashing government spending subtracts demand from the economy. Growth slows, tax revenues fall, and suddenly the government has even less to spend, which subtracts even more demand from the economy.

And that's exactly what appears to be happening in Europe -- in countries such as Greece, Italy, Spain and France, and perhaps most intriguingly, in the United Kingdom, where David Cameron's new conservative government pursued austerity with a vengeance. From the outset, a clamor of voices warned that the risks were huge, and so far, their worries have been validated. On Monday, the U.K. registered its second quarter of economic contraction, the rule-of-thumb definition for a recession.

It's very rare that one gets a real-time demonstration of how two different economic policies compare, but the numbers are hard to argue with: In the "euro area," where austerity has reigned, GDP growth has declined for each of the last four quarters. In the U.S. it has risen. In the euro area, unemployment has been rising for a year. In the U.S. , it's been falling. As Felix Salmon observes, when one compares the United States, the U.K and the euro area, "the tougher and more credible the austerity, the worse the GDP performance."

The trend lines are far too obvious to ignore, and they have sparked a political counter-reaction that appears to have reached critical mass this week. In Italy,  France, Spain and the Netherlands, austerity is suddenly out of favor.

Meanwhile, the United States, despite the best efforts of Republicans, never pursued austerity as devoutly as Europe. Which is not to say the U.S. hasn't tightened its belt at all. Perhaps the most stunning counter-argument to Romney's accusation that Obama is pushing for a government-centered European-style government can be seen in the decline in the size of the public sector under Obama: During his presidency, employment in the public sector -- local, state and federal government -- has fallen by almost 600,000 jobs. In comparison, Bill Clinton added over 600,000 and George Bush added 800,000. As Paul Krugman points out, if Obama's administration had added public sector jobs at the same rate as George Bush, unemployment would currently stand around 7 percent.

But even with those headwinds blowing against it, the U.S. has done surprisingly well. The first guess at GDP growth for the second quarter of 2012, due out Friday morning, is likely to peg growth at around 3 percent. (UPDATE: A disappointing surprise: 2.2 percent.) Meanwhile, the most recently available statistics for the euro area show it contracting.

Which leads us back to the all-important question: What happens if Romney wins the election? The chances are good that if he is victorious, he will bring in Republican control of Congress along with him. Anything budget-related can be passed using the congressional technique known as "reconciliation," which means Senate Democrats won't be able to filibuster. He'll be able to do what he wants.

Once upon a time, Mitt Romney supported stimulus spending to boost the economy. But now he sings a different tune. He has endorsed Paul Ryan's budget, -- "It's an excellent piece of work, and very much needed" -- which would combine huge cuts to social welfare programs with dramatic tax cuts for the wealthy -- an austerity program directly targeted at the poor. Romney's speeches are generally devoid of specific policy proposals, but he's fond of encapsulating his overall economic strategy with the three Tea Party-friendly words "cut," "cap" and "balance" -- the simplest definition of austerity one could ask for. And as he said in Philadelphia on April 12, "The economy is struggling because government is too big, and we have to bring it down to size."

All together, everything points to a plan for turbo-boosted austerity. That's exactly the model that Europe has tried and is now finding wanting. And it's exactly the wrong medicine for a country in which economic growth is still very vulnerable and unemployment is still high.