The WH tells a court the bin Laden raid is top secret, as it keeps leaking snippets to glorify the President 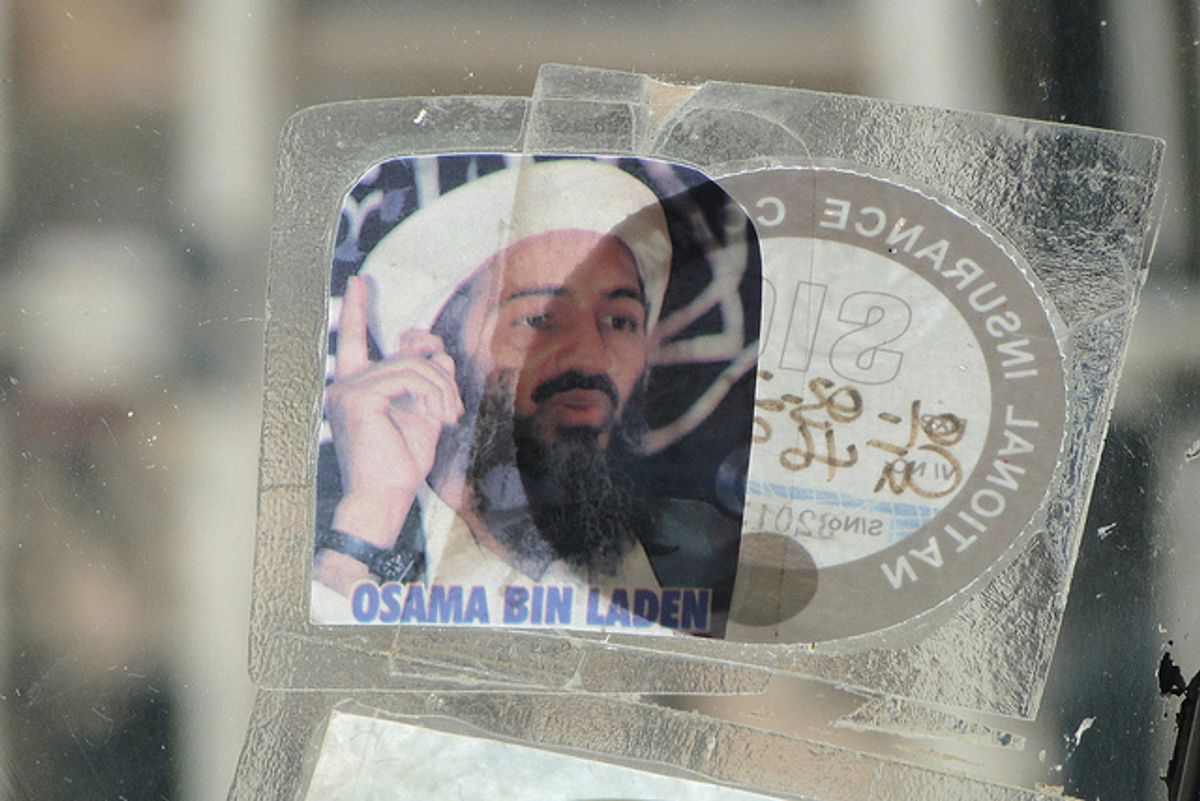 Earlier this week, an Obama-appointed federal judge ruled in favor of the government in a national security case (needless to say), when he denied a FOIA request to obtain all photos and videos taken during and after the raid in Pakistan that resulted in Osama bin Laden's death. The DOJ responded to the lawsuit by arguing (needless to say) that the requested materials "are classified and are being withheld from the public to avoid inciting violence against Americans overseas and compromising secret systems and techniques used by the CIA and the military." Among other things, disclosure of these materials would have helped resolve the seriously conflicting statements made by White House officials about what happened during the raid and what its actual goals and operating rules were.

But while the Obama administration has insisted to the court that all such materials are classified and cannot be disclosed without compromising crucial National Security secrets, the President's aides have been continuously leaking information about the raid in order to create politically beneficial pictures of what happened. Last August, The New Yorker published what it purported to be a comprehensive account of the raid, based on mostly anonymous White House claims, that made Barack Obama look like a mix of Superman, Rambo and Clint Eastwood; The Washington Post called it "a fascinating, cinematic-like account of the operation that killed Osama bin Laden." This week, Time Magazine has a cover story entitled "The Last Days of Osama bin Laden" based in part on "access to top decision makers in over 100 hours of interviews." Among other things, the article features a handwritten memo by then-CIA Director Leon Panetta noting "for the record" the President's decision to launch the assault; the article recounts: "As U.S. Navy Seals burst into his fortress-like compound in Abbottabad, Pakistan, nearly one year ago, Osama bin Laden turned to the youngest of his four wives and said his last words: 'Don’t turn on the light'."

This is what the Obama administration does over and over. It's a flagrant abuse of its secrecy powers. It uses anonymous leaks to selectively boast about what it does and thus shape media narratives and public understanding of its conduct (also called "domestic propaganda"). But it then simultaneously insists that the whole matter is classified -- Top Secret -- when it comes time to be subjected to any form of legal accountability or have its assertions publicly tested.

We just saw this deceitful pattern this week when Obama officials -- yet again -- ran around anonymously boasting about all the Bad Guy Corpses the Commander-in-Chief has produced with his steely use of CIA drones, only to turn around and tell a court that it cannot possibly respond to the ACLU's FOIA request about CIA drones because National Security prevents the U.S. Government even from confirming or denying the existence of that program. They simultaneously use secrecy as a sword and a shield: they ensure that they can make whatever claims they want about their behavior in order to glorify the President, while preventing all attempts to obtain the full and real story and, more important, to obtain adjudications about whether their conduct comports with the law.

There is one other point worth making here about all this. As part of the Obama administration's unprecedented war against whistleblowers, Bradley Manning is currently being prosecuted not merely for leaking classified information, but also for "aiding the enemy" (Al Qaeda), which carries a term of life in prison. Yesterday, the judge presiding over his court-martial (needless to say) refused to dismiss this charge, concluding that any deliberate release of classified information that one knows will end up in Al Qaeda's hands can constitute this crime. As the ACLU's Ben Wizner points out, "the implications of the government’s argument are breathtaking" because it would convert any unauthorized leak into this extremely serious offense.

So the question is: will the DOJ commence an investigation to discover the identity of these Obama officials who keep leaking flattering claims about the bin Laden raid (or the CIA drone program), information which the DOJ is simultaneously telling a court is classified and any disclosures of which will seriously harm national security? Or are leaks of classified information permissible when they glorify the President and prosecuted only when they expose government wrongdoing and deceit? Yes, those are rhetorical questions.

The corpse of Osama bin Laden will be one of the most featured props used by Democrats to venerate the President as a Tough, Strong Warrior and to argue that he deserves re-election (it will probably be the second-most invoked tactic, right after progressive celebrations over how "cool" Obama is, in contrast to the nerdy and awkward Romney: courtesy of the same political faction still so angry (and rightfully so) that the 2000 election became a referendum on the candidate with whom one would prefer to have a beer). Not that many people are interested in them, but there are still lingering questions over what happened in that raid. Either all of that information is classified, in which case the President's aides should be barred from leaking unverifiable, politically beneficial snippets about it and should be criminally investigated on equal terms with other leakers when they do; or --  despite John Kerry's decree that everyone should simply "shut up and move on" -- there should be real disclosure of the relevant information, which means not only on the campaign trail but in courts and media outlets.

The issue here isn't so much the bin Laden raid as it is the ongoing abuse of secrecy powers by The Most Transparent Administration Ever™. The only thing worse than a government which operates as a regime of widespread secrecy is one which flagrantly exploits those powers to create a one-way tunnel of selected disclosures and thus propagandizes the citizenry while glorifying itself.

The excellent Alyona Show looked at this issue last night:

UPDATE: I just received the following email from some P.R. person at NBC News:

In a first for network television, NBC News has been granted unprecedented access to the most secret and secure part of the White House, the Situation Room. In a “Rock Center with Brian Williams” exclusive airing on Wednesday, May 2 at 9p/8c, President Obama and his national security and military teams, relive the pivotal moments of the raid targeting Osama bin Laden.

The iconic photograph taken inside the Situation Room offered the world the first glimpse of a national security team at work during the Special Operations mission. Now, we will hear from many of the people in that photograph about what was taking place on that historic night. . . .

On “Rock Center with Brian Williams,” Williams interviews President Obama in the Situation Room about one of the country’s greatest military missions, which until now, has been shrouded in great secrecy. Williams also interviews Vice President Biden; Secretary of State Hillary Rodham Clinton; Admiral Mike Mullen, USN, Chairman of the Joint Chiefs of Staff (from 2007 to 2011); Tom Donilon, National Security Advisor; Denis McDonough, Deputy National Security Advisor; and John O. Brennan, Assistant to the President for Homeland Security and Counterterrorism.

Wow: that sounds like it's going to be some really hard-hitting investigative journalism there: they're letting him into the Situation Room, where it all happened. So they can't release documents in a court proceeding about the raid because it's all just so Super Secret, but they can all sit around with Brian Williams and "relive the pivotal moments" about "one of the country’s greatest military missions." NBC says that this mission "until now, has been shrouded in great secrecy." Now that Election Season is upon us and it's apparently acceptable to disclose the details, shouldn't the court re-consider its ruling from this week: one based on the DOJ's insistence that this mission was far too secret to allow disclosure? Also: will the national masturbatory ritual over this incident ever end?

Presidents running for re-election typically boast of programs they created, people they helped or laws they signed. They talk about rising test scores or falling deficits or expanding job rolls. President Obama is increasingly taking the unusual route of bragging about how he killed a man.

They and their Democratic pundit-supporters have actually long been boasting about the many people Obama has killed, but they have escalated their focus of late on bin Laden. Now, it's certainly true that the GOP has made a living exploiting national security fears for political gain, so they're hardly in any position to object to any of this with a straight face, but it's also true, as the NYT put it, that "few presidents have talked about the killing of an individual enemy in such an expansive way." In other words, the answer to the last question I posed in the prior update is almost certainly: not until at least November.