The "Daily Show" guide to my enemies

As a producer, I met people whose political views I detested. The hardest part was admitting they weren't so bad 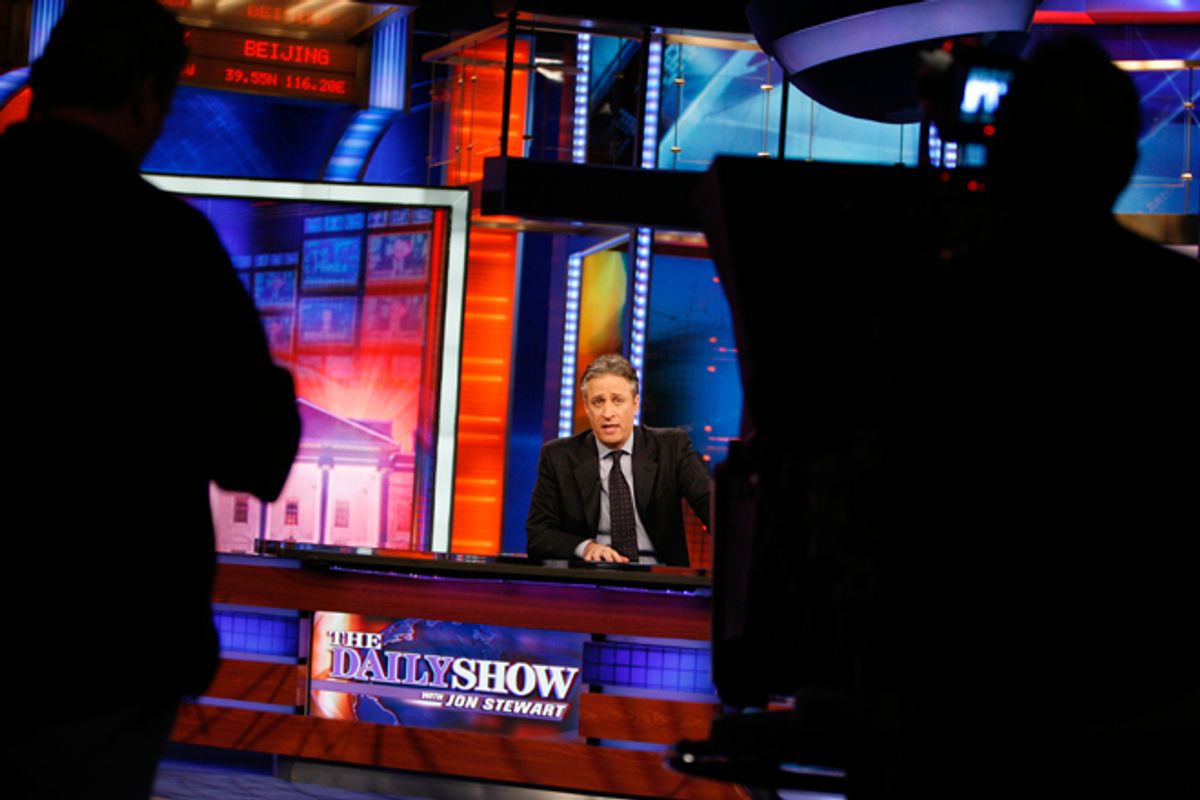 For two years I was a field producer for “The Daily Show With Jon Stewart.” The field producer is the person who guides the creation of the pre-taped segments, the ones where the correspondent travels somewhere to interview and heartily agree with some person who holds, uh, fascinating ideas about the world. This meant I spent a lot of time with people whose causes or philosophies I found blecchy -- the sort of folks who would fit nicely in the overlap of a Venn diagram whose circles included Bachmann supporters, fans of Rush Limbaugh, and people who wear tricorn hats and exercise their Second Amendment rights at Tea Party rallies.  You know – assholes.

Now, I like to loathe people. It just feels so good. I particularly like to loathe the sorts of people described above, and when I see them on TV or read their blogs I sigh contentedly and say, ahhh, it is now morally permissible for me to loathe this person. So imagine how irksome it was to have to deal with persons like that on a constant basis and discover that those persons, in person, generally weren’t loathsome persons after all. In fact, to my great consternation and disappointment, I often liked them.

I think it really hit home for me with Rapture Man. This was in 2005. Rapture Man had set up a service that would automatically send out an email in the event of the Event, an email explaining the sudden absence of the exalted Saved (e.g., him) to the despised Unsaved (e.g., New York Jewish media professionals). I feel morally superior to people who feel morally superior to me, especially when they’re certain their name is on the heavenly guest list and mine isn’t. Folks like him. What I expected was Angry Seething Evangelical Crackpot. What I got instead was a man who was devastatingly guileless and vulnerable and innocent, a man genuinely distressed by the pain and confusion the Rapture would instigate. He was the type you reflexively want to protect, to shield from the cruel realities of modern life.

In this case, the cruel realities of modern life included him and his delusions being ridiculed in a “Daily Show” piece. If I had somehow been eligible for the Rapture before producing that segment, I doubt I was afterward. I felt a bit dirty. One the other hand, it was a very funny piece. You should see it. There’s Samantha Bee disappearing in a flash of light, Ed Helms running through a post-apocalyptic landscape, Stephen Colbert wandering around with bleeding nipples and apparently snacking on parts of Rob Corddry – a veritable “Daily Show” all-star apocalypse. Great fun. Also, I don’t think Rapture Man owned a TV, so I figured I was good.

But he was just one of many others in this I-Should-Hate-These-People-But-Somehow-I-Don’t phenomenon. There was the state representative in Maine who introduced a gay marriage bill just so he could vote against it. He turned out to be just sort of sad and lonely. Wanted to hate him. Couldn’t. There was the Canadian lady who despised her homeland because it wasn’t conservative enough and too kind to immigrants and the poor. She was raucous and funny and pretty good company. I felt awful when it dawned on her mid-shoot that we weren’t actually her pals (really – there was a moment in the middle of the sit-down interview when you could see her finally catch on and sort of crumble. I wanted to leap forward and say, “Wait, it’s not you we find risible and absurd! Just your entire worldview!”). There was the Arizona state rep who introduced a bill to let people bring guns into bars. He had supported other daft legislation, was supremely confident that his background as a golf pro qualified him to interpret the Constitution, and had really, really awful Republican hair. Hated him. Until I met him. Imagine an amiable and none-too-bright Golden Retriever that breaks everything – a bit annoying, maybe, but hard to hate. Who else? There was the well-known conservative strategist, a man famed for his Orwellian genius at manipulating language. He is single-handedly responsible for several of the most insidious and effective locutions in modern political history, terms that make me want to hammer nails in my forehead. And of course he was friendly and funny and smart and could laugh at himself, and there was a strange integrity to his lack of integrity. Hate fail.

And it wasn’t just individuals who would confound me. I would often contact extremely right-wing organizations and ask if they might perhaps be interested in participating in a segment. The response was generally no – probably the wisest choice – but on more than one occasion the person on the other end would enthusiastically inform me that they all loved the show and they watch it every day and what is that wonderful Jon Stewart really like?

By the way, the converse also held true: I’d occasionally meet people who were on the right side (that is, my side) of the issues, and they’d turn out to be insufferable jerks. You know – assholes. (A quick word to the wise: If someone shows up with a time machine and offers you a chance to attend a vegan potluck fund-raiser for Dennis Kucinich, politely decline. [Just to clarify: the congressman himself, delightful. His supporters ... yeesh.])

I recently discussed the topic with another former “Daily Show” producer, and her experience matched mine. She described spending a long day with Shirley Phelps-Roper, the spokesperson for the Westboro Baptist Church – the ones who spread light and joy in the world by doing things like picketing military funerals because, you know, the gays. You’d be hard put to find a group of people with more hateful convictions. And what was it like dealing with Shirley? She was warm and affable and lovely. She lent my friend a wool cap because it was so chilly out.

OK, yes, that’s an extreme example. Being a friendly person doesn’t excuse heinous beliefs or deeds – I’m sure there were plenty of pleasant Klan members, and Hitler loved dogs and so on. But surely there’s a middle ground. We can disagree over the best way to provide healthcare, or what optimal tax rates are, without assuming that the person on the other side of the argument emerged steaming from Satan’s fundament. I might, for example, find Rick Santorum’s views and rhetoric repugnant, but I bet if I spent time with him or his supporters, they’d turn out to be honest citizens and good company.

I don’t think that the lesson is that we’re all basically the same and everyone is wonderful and let’s hug. I will admit that the lesson might be that I’m easily gulled or just morally promiscuous, willing to drop my analytical knickers at the hint of a smile or a charming Southern accent. What I’m hoping the lesson is: People are complex and can hold different views and still be moral actors -- essentially the message that Jon Stewart talked about during his Rally for Sanity.

Maybe you already grasp that concept, because you have good friends or loving relatives with beliefs that are wildly divergent from your own. But I tend to think my experience is more typical: I lived in a little bubble surrounded by people who think more or less like me. And when I considered people with opposing viewpoints I would turn into a fabulist, concocting an entire narrative of who they were and what they were like -- and what they were like was yucko. Because I was not really interacting with them. I just thought I was, because, hey, look, there they are on the TV, or there’s that guy’s post in the comments section. But that stuff doesn’t count. Meeting people counts. Talking counts.

So yes, I love to loathe people, but my “Daily Show” experience complicated all that and sort of spoiled my fun. When I’m exposed to views that I dislike, I try to remind myself of the human being behind those views and to cut that person some slack. I hope that they would do the same. I think we should all fight hard for what we believe in, but I’d like to put in a request for some general slack cutting – especially as we move deeper into what is sure to be a very heated campaign season.

No, of course I was kidding about Rick Santorum. I’m sure in person he’s an obnoxious cretin.

Michael Rubens' first novel, “The Sheriff of Yrnameer,” was published in 2009. His second novel, “Sons of the 613,” is due out this fall.