"Game of Thrones'" teen ruler Joffrey Baratheon is the rare bad guy who can make you viscerally, physically angry 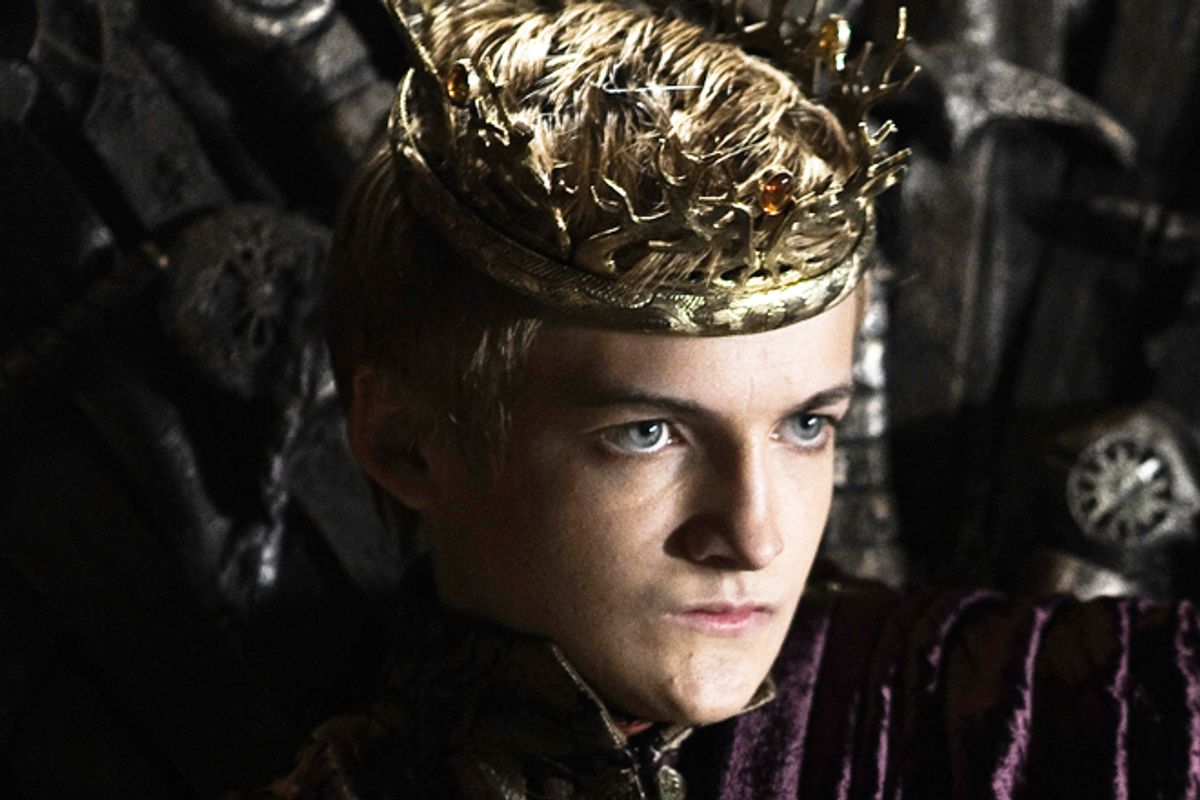 Jack Gleeson in "Game of Thrones"
--

“Game of Thrones'” Joffrey Baratheon (Jack Gleeson) looks like he could be in a boy band. His blond hair is brushed forward over his forehead, in the current Justin Bieber-inspired, fear-of-the-forehead style. His deep-set, hooded eyes and fair skin give him that sleepy, growing-is-exhausting, pillowcase-still-imprinted-on-the-cheek look of late adolescence. His anodyne features, bunched a little too closely around his snub nose, could easily make him the third-cutest member of a group featured in a Tiger Beat poster. Except Joffrey Baratheon is TV’s most noxious, unredeemable villain, and if he belongs on any poster, it's a Most Wanted one, preferably defaced with devil’s horns, an eye patch, nasty scars, boogers, fangs, drool, and then — why stop there — ripped to shreds.

When “Game of Thrones” began, Joffrey was a sniveling brat, the heir to the throne and scion of incest, a distasteful, spiteful, whiny character, dangerous in his weakness, but one who did the bidding of others.  That all changed when Joffrey became the king of Westeros and ordered Ned Stark decapitated in a show of authority that was his coming-out party as the worst person on your television. Since then, Joffrey has done one sadistic, vile thing after another: He forced his fiancée Sansa to stare at her father’s head on a spike, had her smacked around, arranged duels to the death for his pleasure, and showed a willingness to kill a man by forcing wine down his throat until he exploded.

Last week he went further. Hoping to get his despotic nephew to stop threatening his fiancée in public, Tyrion (Peter Dinklage) hired Joffrey two whores. Instead of having sex with them, Joffrey forced one of the women to physically abuse the other in a horrifying scene that ended with Joffrey handing a large, tapered wooden object to one of the women and forcing her to use it on the other, while he watched, crossbow in hand, ready to kill either should they disobey his orders. Tyrion, who knew Joffrey to be an insecure, status-conscious fascist, had underestimated his nephew, who is all those things and a sociopath as well, devoid of empathy and aroused only by power.

“Game” contains scores of characters who toe the line between good and bad, who trigger the audience’s disgust and sympathy. We understand why Stannis and Renly prefer fratricide to an alliance, why Theon would betray the Starks, why Tyrion tries to help his beastly nephew succeed, why the Hound murders at Joffrey’s behest.  Joffrey, however, is not nearly so nuanced a figure, even though he has a theoretically mitigating backstory. Joffrey's biological parents are brother and sister. The king who raised him as his son never had much time for him. His mother is a self-serving bitch who spoiled, coddled and manipulated him, giving him a hugely inflated sense of self and none of the basic ethics or self-reliance to do things well or right. From the most sympathetic angle, Joffrey is the nightmare-inducing result of helicopter parenting gone not just wrong, but psychotic.

And yet "Game" is not interested in sympathy when it comes to Joffrey, doing nothing to redeem him. He is just a villain, served straight up. In a lesser show than “Game,” having such a simply detestable straw man might seem a cheat, a cheap way to get the audience's blood up. (Starz’s “Magic City” has got exactly such an ultra-violent, nut-job gangster, and he seems wholly preposterous and clichéd.) But “Game” doesn’t rely on any one character to supply the blood, and in the show’s vast spectrum of villains and heroes and everyone in between, Joffrey not only seems plausible — how can a show contain every shade of good-to-bad guy and not a truly evil one?— but also downright invigorating.

“Game” is a show full of so many complications, so many plots and characters, each with their own struggle and story and ethical compromises, that watching is a sort of mental and emotional jujitsu. Compared with all of these messy, draining human characters, the one-note Joffrey plays like a brilliant blast of pure, keening, clarifying hatred. If, during the scene in last week's episode, my TV screen had melted away and I had found myself standing in Joffrey’s over-decorated bedroom, I would have made a mad rush to tear his smug, squishy face off, like some deranged, insensible, bloodthirsty character from, well, "Game of Thrones."

"Game" consistently encourages its viewers to adopt the mentality of its characters. It chops off heroes’ heads so we, too, harden our hearts and learn to prize cagey realism over something more noble. It shows blood, guts and bones until we too become insensible to them. It puts a maniacal sadist on the throne, so we too wish someone, anyone, would take it from him, and are ready to punch, slash, find a dragon or birth a smoke monster — or at least condone such behavior — to make it so. If and when Joffrey gets what’s coming to him, I'll probably stand on the couch and cheer, cackling over the painful death of a psychologically disturbed and dangerous teenager. When the rush passes, unlike the  characters on "Game of Thrones," I'll have time to worry about exactly what that means.