No, there's no new pro-necrophilia law in Egypt, and the EPA isn't "crucifying" all oil companies 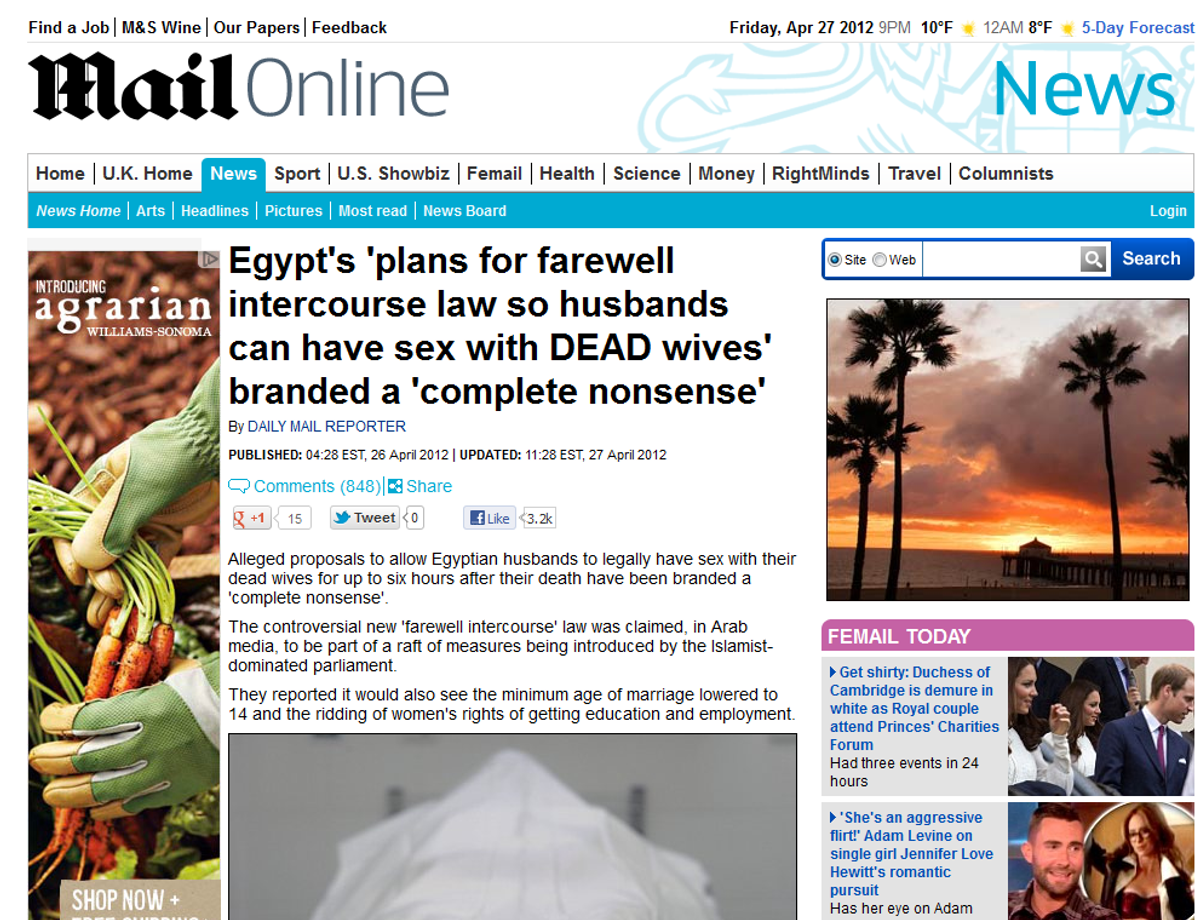 So, it's not a real thing. There's no such law or even any evidence that anyone proposed said law, and even if someone had proposed such a law, there is not even a remote possibility that the Egyptian Parliament would consider it. It's total bullshit. It's the Daily Mail overhyping a story Al-Arabiya took from a newspaper opinion column written by a dedicated Hosni Mubarak supporter.

The Christian Science Monitor's Dan Murphy explained as much yesterday, but the people who highlight specious stories like this don't actually care about "accuracy"; they are just engaged in a propaganda campaign designed to tar all Muslims as violent radical pervert monsters who are slowly taking over the West.

That is actually not the case, and anyone who's ever met a Muslim could probably tell you!

It's important to remember that the structure of the Muslim clergy is, by and large, like that of a number of Protestant Christian sects. Anyone can put out a shingle and declare themselves a preacher. The ones to pay attention to are the ones with large followings, or attachment to major institutions of Islamic learning. The preacher in Morocco is like the preacher in Florida who spent so much time and energy publicizing the burning of Qurans.

This seems like a really staggeringly obvious point -- there are mainstream Muslim clerics and nutty fringe ones, just like in Mormonism and Judaism and all forms of Christianity! -- but the Islamophobia industry has spent years trying to make sure that Americans by and large don't understand this.

Number 2: That Obama EPA person said they were going to "crucify" the oil industry. This is a much bigger story (though it is still limited almost entirely to the conservative press) because it was first spread by an actual senator: James Inhofe, the Senate's worst pilot and best friend of oil and gas. And then it was on Fox, obviously.

And it has now become a regular talking point, that Obama's EPA is "crucifying" oil companies. (Which is bad because oil companies give us our precious life-giving oil!)

Of course the guy, an administrator named Al Armendariz, was specifically talking about going after companies that broke the law. The idea is that the EPA would punish companies that violated the law, because that is the EPA's whole deal. (Some people think there shouldn't be any environmental laws and no EPA, but instead of making that argument, they are instead making the untrue claim, based on words taken out of context, that Obama's EPA is unfairly punishing all oil companies for no reason.)

It is also sort of weird that everyone thinks it's a political winner to say Obama is being too tough on oil companies when no one likes oil companies, but what do I know.