Victims of the prosecution

Hundreds of cases of prosecutorial misconduct have been found in recent studies. But few lawyers are disciplined 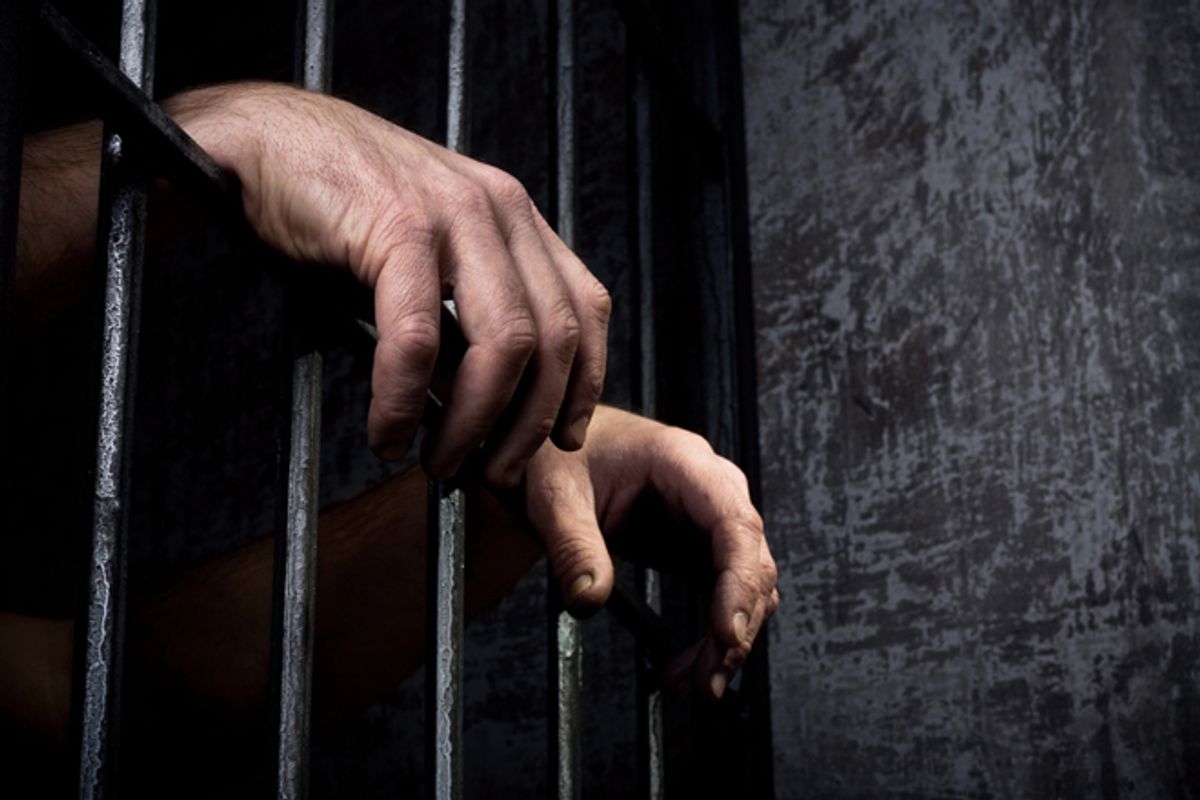 A coalition of innocence projects, legal experts and wrongly convicted defendants announced on Thursday that a study of prosecutorial misconduct in Arizona from 2004 through 2008 found that prosecutors committed error in 20 cases.

The coalition — which includes the Innocence Project of New York, along with Veritas Initiative, a policy and research arm of the Northern California Innocence Project, as well as Innocence Project New Orleans and Voices of Innocence — convened in Arizona on Thursday night in the latest stop in a national tour aimed at exposing prosecutorial misconduct and initiating reform.

During that same time period, three prosecutors were publicly disciplined by the State Bar of Arizona, but none of the prosecutors in the 20 cases found by Veritas were subject to any discipline.

One of those three prosecutors  disciplined was Kenneth Peasley — once considered the most feared prosecutor in Pima County, Ariz., where he won  conviction after conviction, some of which sent defendants to death row.

Peasley was disbarred in 2004 for knowingly allowing a detective to testify falsely in two capital murder trials — improper behavior that led to the release of a man from death row.

Eight years later, Peasley’s legacy as an unethical prosecutor continues to grow, even though he died in 2011.

In September 2011, a federal judge set aside the 1997 murder conviction of Khalil Rushdan, ruling the conviction was the product of a “vindictive prosecution” engineered by Peasley.

Even though prosecutorial misconduct in state and federal courts has been the focus of studies and more vigorous reporting by the media in the past two years, Rushdan’s case is yet another that has flown under the radar of the public eye.

The case began on Nov. 11, 1993, with the discovery of the body of Francisco Soto in the trunk of his car in Yuma, Ariz.

Police began investigating but had no leads until July 1994, when Yuma police detective Cesar Fazz tracked down Rushdan in Moreno Valley, Calif., believing he might know something about the murder.

Rushdan, who was then known as Leslie Leroy Rush, told Fazz that he had been the middleman in a narcotics transaction in Tucson on Nov. 9, 1993, in which Soto was to sell cocaine to Dennis Sanford.

Rushdan told Fazz that after he introduced Sanford to Soto, he left to purchase baggies and baking soda. When he returned, he found Sanford and his companions carrying Soto’s body out of the apartment in a blanket.

Rushdan said he left when Sanford pointed a gun at him and threatened to kill him if he said anything about the murder.

He gave a recorded statement to Fazz and cooperated in the investigation of the murder, taking and passing a polygraph exam. He gave his gun to police for ballistics testing, which showed it was not the murder weapon.

As a result, Sanford was arrested and charged with first-degree murder.

Rushdan testified at Sanford’s preliminary examination, and Sanford went to trial. Although Rushdan repeatedly told authorities that he feared for his life because of numerous death threats against him and his family, he received no protection and ultimately moved away from his home in California.

When Sanford went to trial, Rushdan could not be located and so his preliminary hearing testimony was introduced to the jury.

In the process of persuading the judge to allow the prosecution to introduce Rushdan’s preliminary hearing testimony in Sanford’s trial, Peasley repeatedly told the court and defense counsel that Rushdan had received no deal whatsoever in exchange for his testimony.

The testimony was not enough and Sanford was acquitted.

Fourteen months later, Peasley charged Rushdan with murder. Rushdan was convicted, largely on the basis of his testimony at the preliminary hearing and his statements to Fazz in California.

Again, in response to efforts to suppress Rushdan’s preliminary hearing testimony in Sanford’s case from being introduced against him at his own trial, Peasley took the position that Rushdan had never had any sort of a deal with the prosecution.

On April 21, 1997, Rushdan was sentenced to life in prison with possibility of parole after 25 years.

In 2005, they went to federal court, where they filed a writ of habeas corpus, contending that Rushdan was the victim of a vindictive prosecution by Peasley.

They argued that Fazz had given “explicit and implied” assurances to Rushdan that he and his family would be protected from retaliation and that he would not be prosecuted.

On Sept. 21, 2011, 10 years after Kuykendall and Armstrong — by then an attorney — started their research, U.S. District Judge Frank Zapata granted the writ and ordered Rushdan to be retried or released. The ruling came two weeks after Peasley died.

Peasley, the court found, wanted Rushdan as a witness but did not want to grant him immunity or any kind of deal for his testimony because he would have been required to disclose that information to Sanford’s defense attorney.

Peasley testified during the habeas proceedings that he had an “understanding” with Rushdan that “as long as he cooperated and came to the preliminary hearing, which he did, and came to trial, which he didn’t, that he was going to be a witness and go home.

Zapata found that “in Peasley’s mind,” he had an agreement with Rushdan, but that it was not written.

“By gaming the situation as he admittedly did, Peasley positioned himself to get what he needed without giving up anything,” Zapata ruled. “Peasley … did not want to lose the tactical advantage of not having a written agreement.”

At Rushdan’s trial, Peasley countered defense claims that there had been an agreement not to prosecute him by telling the jury in closing arguments, “There is absolutely no evidence whatsoever that there was any kind of an agreement that was ever made in this case.”

Zapata ruled, “Here, by playing fast-and-loose with the truth and a man’s constitutional rights, Peasley lost his star witness and Sanford walked out of court a free man.”

He found that the only “plausible explanation” for charging Rushdan with the murder — even though he was not the gunman, but only a middleman in a drug deal that went bad — was because he was “seeking vindication for Rushdan’s decision not to testify against Sanford” at trial.

Peasley and Fazz “walked a fine line with Rushdan and the court system,” the judge ruled. “Their game involved the manipulation of people and the twisting of the truth.”

After the judge ruled, Pima County prosecutors decided not appeal the judge’s order, and Rushdan was freed a few days before Christmas last year.

“One of the most striking things was the profound conviction that Peasley and his compatriots at the Pima County Attorney’s Office maintained that Peasley had done nothing wrong, even after being confronted with uncontested and uncontestable evidence of what he had done,” Kuykendall said in an interview.

“At the hearing in federal court, no legal wizardry took place — Peasley simply explained to the judge that it was his role to enforce his ‘understanding’ with Rushdan, regardless of the obviousness to the rest of us – including the judge – of the multiple illegalities that had to occur for his secret deal to be enforced,” Kuykendall said.

Among those at the prosecutorial misconduct conference on Thursday night in Phoenix  was John Thompson, whose case, Connick v. Thompson, was the inspiration for the national tour.

Thompson was wrongfully convicted of murder in New Orleans and sent to death row. He spent 18 years in prison, coming within two weeks of execution, before evidence was discovered that proved his innocence.

That evidence had been suppressed by prosecutors. After Thompson was exonerated, he sued the Orleans Parish District Attorney’s Office and won a $14 million judgment. But in 2011, the U.S. Supreme Court, in a controversial split decision, set the judgment aside, saying the prosecution was immune from damages.

“Prosecutors have tremendous power over our lives,” said Larry Hammond, one of the moderators of the event and founder of the Arizona Justice Project.

“While the vast majority do an admirable job under difficult circumstances, some commit intentional misconduct that leads to grave injustices like in the case of Mr. Thompson,” he said.

“Now that the Supreme Court has made it extremely difficult to sue prosecutors civilly, we need to develop systems of accountability for dealing with those prosecutors who violate their legal and ethical obligations.”

The conference came just days after the Arizona Supreme Court disbarred former Maricopa County attorney Andrew Thomas and one of his former deputies and suspended another former deputy for six months.

On April 11, the court found that the former prosecutors had conspired with Maricopa County Sheriff Joe Arpaio to bring wrongful indictments against their political opponents, including judges, and conducted improper investigations from 2006 to 2010, when Thomas resigned as county attorney. An analysis by the Arizona Republic News estimates that the actions have cost taxpayers in the county more than $10 million.

Earlier this month, Veritas and the innocence projects released the results of a similar study in Texas.

The Veritas Initiative uncovered judicial findings of prosecutorial misconduct in 91 Texas criminal cases between 2004 and 2008. Courts upheld the conviction in 72 of the cases, finding the conduct was “harmless.” In 19 cases, the court found the error “harmful” and reversed the conviction.

Similar to Arizona, no prosecutors in those cases were disciplined for their misconduct.

A study of criminal cases in the state of New York from 2004 to 2008 found that prosecutors committed error in 151 cases. The courts upheld the conviction in 114 of, finding the errors “harmless.”

In 35 cases, the court found the errors “harmful” and reversed the conviction. From 2004 until November 2011, only three prosecutors were disciplined by New York grievance committees for misconduct — none of it for the misconduct found by the courts in the 151 cases.

Veritas also has released two reports in California identifying more than 800 court findings of prosecutor misconduct from 1997 through 2010.

Further research will be revealed later this year in Pennsylvania, California and Louisiana.

“The fact that it is so difficult to document the scope of the problem speaks volumes about the lack of accountability for prosecutors,” said Cookie Ridolfi, professor at Santa Clara University School of Law and executive cirector of the Northern California Innocence Project and the Veritas Initiative.

“We don’t accept this lack of accountability and oversight for any other government entity where life and liberty are at stake, and there’s no reason we should do so for prosecutors.”

Maurice Possley is a Pulitzer-Prize winning journalist who formerly worked as an investigative researcher for the Northern California Innocence Project’s Veritas Initiative. He welcomes comments from readers.