A holy war over gay marriage

In North Carolina, two churches face off over an upcoming vote on whether to constitutionally ban same sex marriage 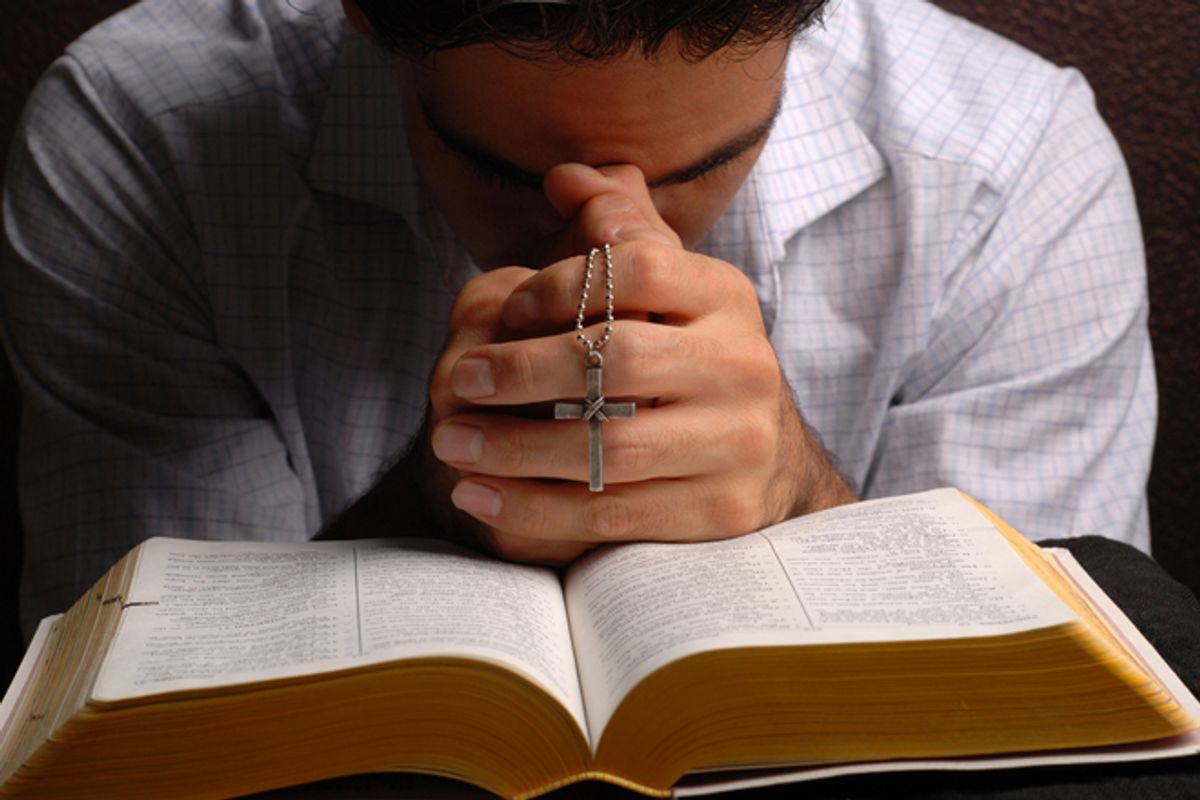 When North Carolina voters head to the polls on May 8, they will be asked to decide on a constitutional amendment - known as "Amendment One" - that prohibits marriages between same-sex couples. Same-sex marriage is already illegal by statute, but N.C. is the only state left in the Southeast without a constitutional ban.

So this is quite a showdown. There’s much talk of liberty, lifestyle and family -- and a whole lot of talk about God. As opponents and supporters target churches all the way from Appalachia to the Outer Banks, religious leaders are flooding the airwaves to share their views on a hot button issue that throws core values into stark relief.

Growing up, I attended a church in Raleigh that is deeply involved in the current debate. And I can tell you that the fault lines are deep – and often surprising – to folks in other parts of the country.

A Tale of Two Churches

The Upper Room Church of God in Christ, located in south Raleigh, is presided over by the Rev. Patrick Wooden, who describes homosexuality a “deathstyle” and presents himself as a zealous defender of traditional marriage. Rev. Wooden, an African American, launched his ministry career with a tent revival in a small rural town. Bringing a message infused with miracles and warnings of the devil’s influence, the pastor came to Raleigh to lead the Upper Room in 1987, where his congregation, by the reckoning of the church website, today numbers 3,000. Proudly describing himself as a businessman and his church as one of the largest employers of blacks in Raleigh, Rev. Wooden's teachings carry a whiff of prosperity gospel that appeals to those striving for economic salvation as well as spiritual. And he champions social views that have made him a rising right-wing media star, complete with spots on "The O’Reilly Factor."

A passage in Genesis forms the basis for Rev. Wooden’s view that God’s definition of marriage is strictly a male-and-female union. He rattled it off in a recent TV appearance: “Therefore shall a man leave his father and his mother, and shall cleave unto his wife: and they shall be one flesh.”

Rev. Wooden is particularly incensed with those who equate the battle for gay rights with the struggle for civil rights. His comments on homosexuality, sometimes graphic, push the notion that gays are aberrant both culturally and physically. Who, he demands, could support a practice that forces men “to wear a diaper or a butt plug just to be able to contain their bowels?” For him, comparing gays to blacks is denigrating.

Just a few miles away from Rev. Wooden’s church, just at the edge of the North Carolina State University, stands Pullen Memorial Baptist Church, where a different strain of righteousness prevails. The church is led by Rev. Jack McKinney and co-pastor Rev. Nancy Petty, a lesbian who has made history as the first openly gay minister to lead a Baptist church in the South. Pullen, with roots in the late 19th century, evolved a brand of progressive Christianity under the leadership of poet and scholar E. McNeill Poteat, Jr., whose preaching emphasized an inclusive spirit uncommon in Baptist churches. In 1956, the liberal firebrand W.W. Finlator was called to Pullen, and under his guidance, the church opened its doors to worshippers of all races in 1958. In the late 60s, it was this focus on inclusiveness and social justice that attracted my father and mother (an Episcopalian and a Methodist respectively) who both taught at local colleges.

Finlator’s legacy of tolerance continued after his retirement in 1982, when the issue of gay rights began to emerge on the national scene. In 1992 the Southern Baptist Convention cast Pullen out for blessing a same-sex union. Today the church serves as the headquarters for the North Carolina Religious Coalition for Marriage Equality, an interfaith same-sex marriage advocacy group composed of state religious leaders. Last year, Rev. Petty declared that until gay unions are legislatively permitted, she would no longer sign marriage licenses, stating her view that “every time I sign a marriage license for a heterosexual couple and act as an agent of the state, I am reminded of those couples who I marry that are denied the basic human right to legally marry the person of their choice.”

Squaring off against the Rev. Wooden in a recent forum on the same-sex marriage amendment, Rev. Petty expressed her view that the Bible doesn't prescribe a single form of marriage. She has condemned Amendment One as "anti-family" and calls upon North Carolinians to stand together to "protect all people's rights."

That two churches of such dramatically divergent views could occupy a 10-mile radius underscores the complexity of religion in North Carolina, where clashes in the public square date all the way back to the 17th century, when Quakers and Anglicans struggled for control of the colony’s political leadership.

Allegiances break down along racial and class lines in ways that have long confounded and intrigued social scientists, who offer a variety of theories on why you'd have a predominately black church’s leader defending traditional marriage against gays while the head of a nearby, mostly white church frames the issue as an urgent question of civil rights.

Over the last century, the tradition of southern progressive Christianity, with its intellectual strain, was deeply entwined with the national political battle to secure support for Roosevelt’s New Deal. Aligned with northeastern churches like New York’s Riverside Church (built in 1930 with Rockefeller money as a cathedral to progressive Protestantism), congregations like Raleigh’s Pullen Memorial and Chapel Hill’s Binkley Baptist Church, along with divinity programs at institutions of learning like UNC, Chapel Hill, tended to foster openness to others’ beliefs, a tradition of combining faith and reason, and an emphasis on questioning dogma and viewing the Bible in historical context.

Meanwhile, the rise of fundamentalism and the so-called “newer sect” faiths like the Pentecostals tended to attract more rural, working-class Christians. Historian Ken Fones-Wolf of the University of West Virginia has pointed out that hard times of the Depression tended to reinforce rural-born Southerners' strong beliefs in the importance of God's grace, salvation through faith, the necessity of bearing witness, and the Bible as the sole religious authority. Ministers at these pulpits, along with those of most of the fast-rising Baptists, were suspicious of outsiders and reminded their flocks to be wary of associating with those – like labor unions, for example – who did not share their faith.

Which Side Are You On?

The primary election takes place Tuesday, May 8, but early voting is already underway. In addition to voting up or down on the gay marriage amendment, N.C. voters will make political party selections in a crowded race for governor. The hot button gay marriage issue appears to be driving people to the polls early.

The timing of the vote is thought by many to boost the chance of passage because of the Republican presidential primary -- though Romney's annointment may throw off that calculation. Over the past decade, the Democratic-controlled legislature successfully successfully blocked efforts by social conservatives to alter the Constitution to ban same-sex marriage. But now, Republicans control both houses, and last September they found enough support to put the question to voters.

Polls and denominational stances reveal demographic trends that resist easy categories. In January, the Raleigh-based Public Policy Polling found that 56 percent of respondents to a poll favored the amendment, while 36 percent would vote against it. Ten percent were undecided. The most prominent Catholic leaders in the state, Bishops Peter Jugis of Charlotte and Michael Burbidge of Raleigh, support the amendment. On the other hand, the state’s Episcopal Diocese opposes it. Black Christians, among the most opposed to homosexuality, make up 13 percent of the state population (nearly twice as high as the national average). Yet the North Carolina NAACP, which includes thousands of African-American pastors across the state, is against the amendment.

When my dad was a kid in the small town of Winton, N.C., his Episcopalian family frowned on the idea of his bringing home a Presbyterian. The notion that the state's churches are now divided on the issue of whether partners of the same sex can marry attests to an astonishing transformation in just one generation. The values voters express on May 8 will say a lot about the direction of southern Christianity. In a state where religion plays a central role, questions about inclusiveness, tradition and openness to change will send a powerful signal throughout the nation. There is an awful lot at stake -- maybe even the soul of the South.