Science fiction no more: The perfect city is under construction

Cities as technologically precise as a Formula One race car are being built now. Do we really want to live in them? 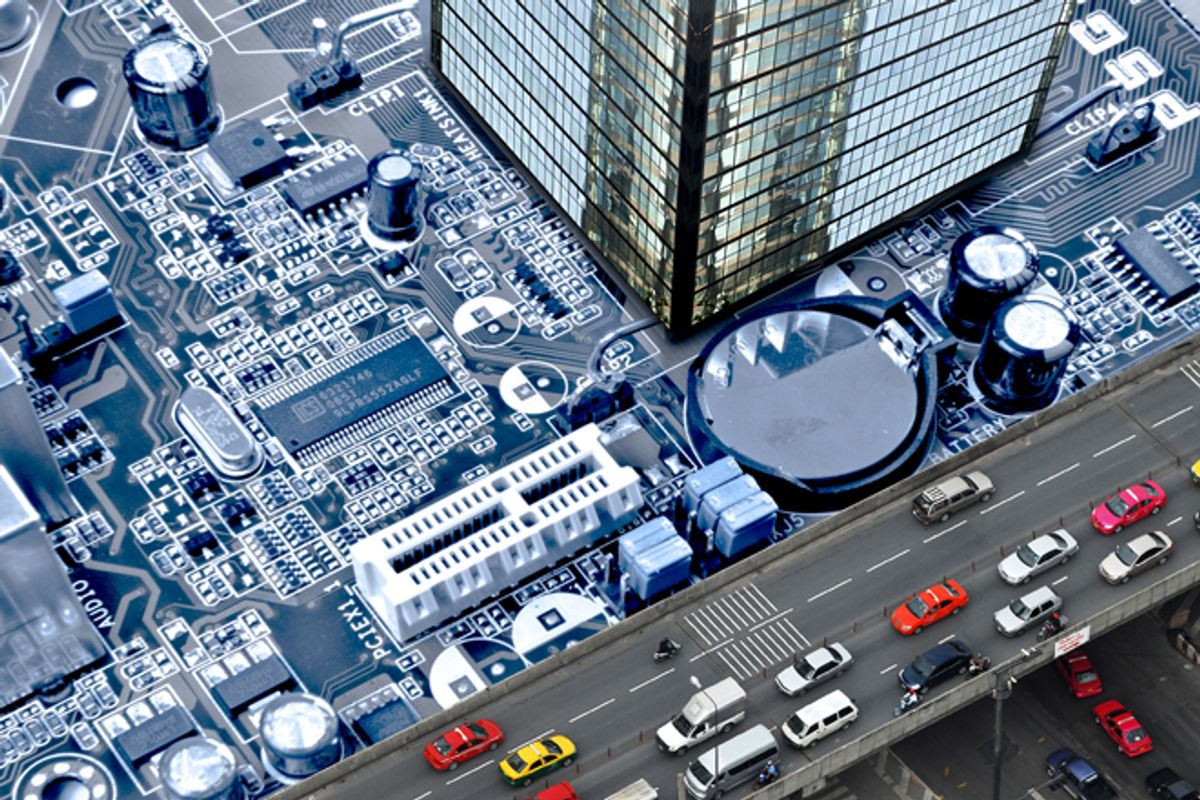 Formula One car racing is the most viewed sport in the world. On any given race day, half a billion people — one-fourteenth of the globe — are watching it on TV. But it's what they're not seeing that wins races today: More than 300 sensors are implanted throughout each vehicle to monitor everything from air displacement to tire temperature to the driver's heart rate. These data are continuously transmitted back to a control room, where engineers run millions of calculations in real time and tweak their driver's strategy accordingly.

Through this process, every last ounce of efficiency and performance is wrung out of each car. And so it will be with cities like PlanIT Valley, currently being built from scratch in northern Portugal. Slated for completion in 2015, PlanIT Valley won't be a mere "smart city" -- it will be a sentient city, with 100 million sensors embedded throughout, running on the same technology that's in the Formula One cars, each sensor sending a stream of data through the city's trademarked Urban Operating System (UOS), which will run the city with minimal human intervention.

"We saw an opportunity ... to go create something that was starting with a blank sheet," said PlanIT Valley creator Steve Lewis, "thinking from a systems-wide process in the same way we would think about computing technologies."

Built-from-scratch cities have been popping up for years, but fully sentient ones are only in the prototype stage (PlanIT Valley will have just 150,000 residents). And their goal, as with all sentient beings, is to replicate. The percentage of global city dwellers will surge to 70 percent by 2050, and many of the fastest-growing cities are sprawling eco-disasters in the making. PlanIT Valley's hyper-efficient model promises to be bright green. A white paper created by Living PlanIT, the company designing PlanIT Valley, details an techno-paradise of energy conservation. (Living PlanIT did not respond to requests for comment.) Cars are guided toward empty parking spaces, personal computers are engaged to run the UOS when they're sitting idle, and rooms not only lower the air conditioning when you've left them (yes, the system will know when you've left them), but can even decide whether it's worth it to do so based on how long you typically leave that room vacant.

But wait, there's more! Leaky faucet? The UOS can detect it, and if it can't do the repair remotely, will dispatch a plumber. Lose your child? Surveillance cameras might be swiveled to ascertain "the child's current location and activity." Apartment on fire? The UOS will alert the fire department, direct each resident to the safest exit, adjust the neighborhood's traffic lights to clear a path for the incoming trucks, tell the firefighters which parts of the building are affected and the locations of anyone inside, automatically unlock doors and windows, increase pressure in that neighborhood's water mains, and allocate patients in priority order when they arrive at the nearest hospital.

In many ways, this type of city epitomizes our attitudes toward modern technology, says Mark Shepard, an architect and the author of "Sentient City: Ubiquitous Computing, Architecture, and the Future of Urban Space." "From a tech perspective, we're not really selling products and services anymore. We're selling lifestyles," he says. And the sentient-city lifestyle is sure to appeal to a certain brand of technophile. "Why not?" says Carlo Ratti, director of MIT's SENSEable City Lab, when asked if he'd live in a city like PlanIT Valley. "Provided I have control of my own information, which is a very basic principle we should ask for."

But for the rest of us, this radical re-imagining of city life is a classic example of top-down urbanism, treating the residents as a problem to be solved rather than as part of the solution. Certainly, city governments need to provide for their people and run a tight ship, but a city that operates like a valet service works against urban life's primary strength. There's a great little poem by D.H. Lawrence called "The Third Thing":

Water is H20, hydrogen two parts, oxygen one,
But there is also a third thing, that makes it water
And nobody knows what that is.

Cities are more than the sum of their parts because it's not their parts that make them great. It's the thing in between those parts -- if you live in a city, you know what I'm talking about. "Cities built from scratch have generally failed because they don't become cities that people evolve through," says Shepard. "Quite often, it's the productive friction these places produce that make them dynamic." Not that life in PlanIT Valley couldn't end up being dynamic despite itself. "The funny thing about these cities programmed for efficiency, you find a lot of conversations about how to design serendipity back into them to make them more interesting," says Usman Haque, founder of Pachube, an open Web service that manages real-time data.

Haque foresees that vital urban friction coming to PlanIT Valley, but not in preprogrammed form -- rather, in the form of residents figuring out how to beat the system. "When you have more rigid structures, people get very creative in finding ways to get around it," he says. You can picture PlanIT Valley following in the huge three-toed footsteps of Jurassic Park as "nature finds a way." "The inhabitants will eventually want to reconfigure it and have an effect on it," says Haque. "You either plan for that, or be surprised by the push-back."

Some form of eventual push-back seems inevitable. Cities that segregate their citizens from the urbanization process risk ending up like Brasília, Brazil's thoroughly planned, thoroughly unloved capital. And because it's a prototype, pretty much everyone in PlanIT Valley will work for the companies that helped build it, making the sentient city a sentient workplace. "The thing that worries me is that these places become like urban factories, producing output that's dictated," says Haque. Who's going to call in sick and go hit the beach when the UOS can tell when you've left your apartment?

Part of Brasília's failure was its inflexibility, and PlanIT Valley has addressed this in part -- indeed, the city is designed to be constantly tweaked according to the data. The difference is that, whereas PlanIT Valley will auto-tweak, a city like Boston is working hand in hand with residents to fix its streets -- a cheaper, community-oriented method. An app called "Street Bump" developed last year by the mayor's office of New Urban Mechanics was supposed to use drivers' iPhones to create a virtual map of Boston's potholes. Because iPhones can detect vibration, the idea was that drivers going about their commute would register bumps in the road on their phones, which would transmit that data back to city hall. It didn't work very well (the iPhones mistook things like railroad crossings for potholes) so the city challenged armchair hackers to improve on it, with Liberty Mutual kicking in $25,000 for the winner. Three finalists were recently announced, and the city is now implementing the improved user-generated algorithms for a relaunch of the app this summer.

This isn't just hippie-dippie idealism -- it's a better model. The city with 100 million sensors will cost $19 billion. Citizens engaged voluntarily? Free of charge. And how far this cool $19 billion will go is anybody's guess -- it's impossible to predict whether today's sentient cities will be responsive to tomorrow's unforeseen urban problems. Had such a city opened 30 years ago, climate change might not have been a twinkle in its eye. It's like those AT&T commercials from the '90s that promised we'd all be sending faxes from the beach someday. This isn't to suggest that climate change won't be a problem in the future, only that it's very difficult to predict what technologies will change the game going forward.

The technology isn't the only wild card -- the very idea of an Urban Operating System is a risky proposition. "Aerotropolis" author Greg Lindsay points out that a scaled-down version of it has been tried before, in New York City in the 1960s, when the RAND Corp. designed a computer model to streamline the city's public services. Written about in Joe Flood's book "The Fires," the computer systematically withdrew fire protection from New York's poorest neighborhoods, setting the stage for the blazes that would decimate the South Bronx over the next decade.

The lesson? Humans will act in ways that even the smartest computer model can fail to anticipate -- which is fine, until you put your entire city in its hands. "What's not being discussed is that cities are stubbornly resistant, highly unpredictable places," says Shepard. "In the end, the unforeseen implications of this new technology will be the real story."