I gave birth at home and breastfed. My mom was drugged up and never lactated. Which one of us got the better deal? 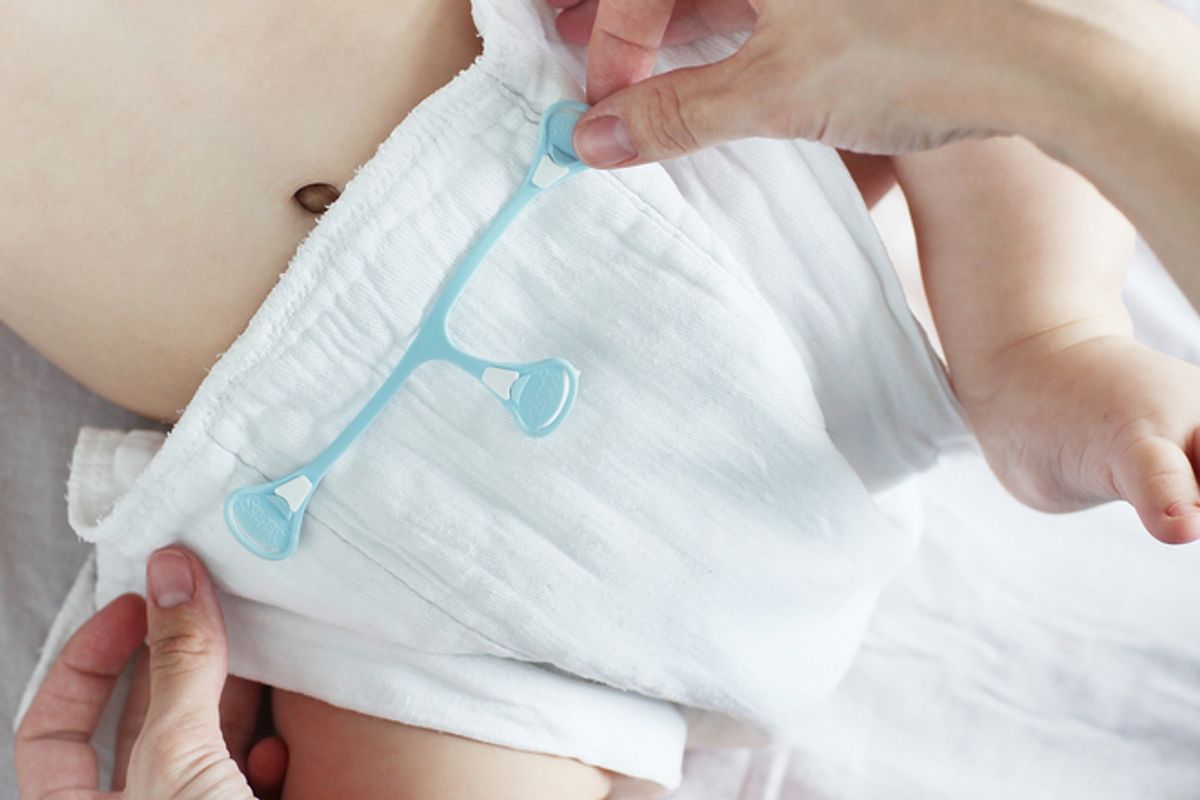 Kids love hearing the story of their birth and, growing up, I was no exception. I came into the world just as feminists began demanding that women be allowed to labor naturally, huffing and puffing their way through contractions, husbands and friends in the delivery room for emotional support.

My mother would have none of that. She was gassed into a twilight sleep and shot up with opiates for the pain. Flat on her back and feet in the stirrups, she pushed on command until I fell into the doctor's arms. My arrival – another girl! -- was announced to my dad, who sat with other bored men in the waiting room. He would first see me through a window, where I was displayed among the other newborns, swaddled tight and sleeping.

One final detail I insisted that my mom include with each retelling: "And then you got a shot?"

"That's right," she would say, referring to the heavy dose of estrogen once routinely injected after a birth. "That way my body wouldn't make milk, and I could go back to work." I couldn't help myself; I cheered.

I loved that shot because of what it meant to my mom, something I understood even at a young age. She had tried being a housewife after my sister was born the year before, but the drudgery of washing and folding diapers, the inanity of popular soap operas, the lack of tangible accomplishments at the end of each day, had her clawing her way back to a steadily rising corporate career when I was only 6 weeks old.

Contrast this with my own children's more feral birth stories, which involve some or all of the following: midwives, birthing tubs, hospital-grade pads lining my sofa and living room floor. And breastfeeding. Lots and lots of breastfeeding. I squeezed what maternity leave I could from federal laws. In the end, though, I quit my job so I could figure out this life-shifting role without the hassle of long commutes, expensive child care, and pumping breast milk while perched over a toilet.

The way I looked at it, I was taking the maternity leave my society didn't want me to have and that women like my own mother never wanted. But the French feminist and philosopher Elisabeth Badinter argues in her 2010 book, which was finally released in English this week, I was yet another newbie mom screwing things up.

In "The Conflict: How Modern Motherhood Undermines the Status of Women," Badinter explains that, 30 years ago, things were looking good for a generation of moms in Western Europe – women had total control over reproduction, they had achieved financial independence, wage gaps were shrinking. Then a global economic crisis kicked women off the job, pushing them back in the home and searching for meaning. At the same time, a renewed interest in the environment persuaded grown-ups to look to the earth and tradition for answers. Marry the two, Badinter argues, and a new type of mom was born -- one who knew what she wanted for her babies and believed she possessed some innate wisdom to make it happen. Problem is, these moms, the daughters of Badinter's and my mother's generation, set women back decades with things like drug-free births, generous, state-sanctioned maternity and paternity leaves, and, of all tools of the Man, cloth diapers.

Sure, children have been ruining their mothers' lives since we evolved from chimps. But what makes this snapshot in time so different, according to Badinter, is the fact that modern, emancipated mothers are so complicit in their own destruction. Lactating, co-sleeping, time off from work – that's a bunch of "naturalist" mumbo-jumbo and a distraction from a woman's duty to herself and a society that wants to see her as equal but can't quite get past the milk stains on her blouse. These days, though, not only do women welcome the career interruption, according to Badinter, but they also buy into the idea that mothering is an instinct. So women adopt a "naturalist" lifestyle, carrying their babies, spending time with them, actually purchasing, on purpose, diapers that have to be scraped and washed rather than tossed in the trash.

For Badinter, this naturalist parenting has taken over, triggered mom guilt, convinced us that we should refuse epidurals, breastfeed off-schedule, and, of all things, take advantage of long, paid maternity leaves. Who cares that these things might actually be the woman's choice, make sense for her family, satiate her curiosity about the thresholds of human pain? By participating, women are ceding power back to men. The men? They don't have to lift a finger – thanks to moms, they've regained control over everything.

I've been a modern mom long enough to look at mommy-wars rhetoric like Badinter's with the skeptical eye of a wounded veteran. I mean, she makes a great case that mothering trends come and go and are rarely based on irrefutable science. Epidurals? Safe. Breast milk? Not all that. Skin-to-skin bonding with babies? Fun but hardly crucial. I think we all know we're not going to be snacking on placenta forever. Then again, does a home birth really have a negative impact on the stubborn wage gap?

Badinter particularly has it in for breastfeeding, something she thinks too many women have been tricked into and something French women aren't all that interested in trying. Why bother, she wants to know. It ties moms down, adds a layer of guilt, isn't any better than bottles and formula. Anyway, it's taxing – on the woman and her "conjugal partner." When it comes time to bed down, rather than offering up bountiful breasts for her mate to fondle, moms are pushing fathers to the couch to make room for her new lover – a co-sleeping baby. It's an arrangement, she recounts with seeming horror, that can last for years.

Badinter's critique is not surprising, given how zealous the "breast is best" messengers can be. (She dedicates a delightful number of pages to taking down La Leche League.) But as a mom who breastfed her kids for years, I can assure you that nurslings are a ball-and-chain only as much as the outside world won't welcome them in. In which case, it's not breastfeeding moms who are undermining women's status, it's the same old mother- and child-averse institutions – work, school, swimming pools swarming with conservatives. Modern engineering has made babies a kind of go-anywhere accessory. Problem is, too much of society prefers they're not anywhere, no matter what they eat.

Badinter isn't the first aging feminist to accuse younger women of trying to settle the score with their feminist foremothers. Was my decision to take a career break, suckling my babies for years and even, occasionally, wrapping them in cloth diapers a rebellion against my mother's hard-driving, job-focused ways? The artificial milk and endless hours at a babysitter's? That's not how I see it. My mother and I both reacted to the demands of our time. In this book-length attempt to scold the young'uns for screwing up progress, Badinter, like others before her, fails to see that what her generation gave us were real choices.

After I was born, the corporate career window was closing on my mom with every day that I got older. She crawled back through just in time and made a decent life for herself and her family. I, on the other hand, felt like I had time. Sticking with one company for life was as outdated as a postpartum estrogen shot. I didn't have to rely on the one job that I left. I could start a new career when I was ready. My mother's urgent return to work had paved a slow and meandering path for women (and men!) of my generation. I wasn't expected to leave my job to be with my kids, which is exactly why I could consider it.

Generation gaps aside, Badinter's book ultimately feels outdated. Most of her data comes from the 1980s and '90s, and family life has evolved dramatically since then. I'm in Year 11 of motherhood, and I feel I've witnessed modern parenting change right before my eyes. Where Badinter reports regression for women, I see signs of progress.

Instead of the old-guard patriarchy taking over the wheel, more and more partners share the load – either through necessity or a sincere desire to be with their kids. I have as many stay-at-home-dad friends as I do similarly barely employed mom friends. These dads can work the cloth diapers as well as any oppressed French eco-femme. They heat formula, thaw frozen breast milk and pack healthy lunches. They attend playgroups and work the co-op preschools during the day and send out resumes and story pitches and teach classes at night. Want to piss them off? Just call them "Mr. Mom." Or tell them they're doing a great job babysitting their kids.

I'm not saying Badinter is completely out of touch with Western mothers' lives. It's true that motherhood lowers women's status. But that's not a modern phenomenon – and it has little, if anything, to do with cloth diapers. Has she even seen modern cloth diapers and accompanying accessories? If it weren't for the fun colors and ridiculous brand names (Fuzzi Bunz?), you could easily mistake them for Pampers.

Where modern women do undermine themselves is the constant questioning of their choices and allowing for an onslaught of guilt. No matter what we do, it's wrong in someone's eyes – so why do we take any of this criticism seriously? Instead of doing as we please and moving on, as Badinter praises French women for doing, we do as we please and then punish ourselves with guilt. I should know: Though I stand by the choices I've made as a mom, this book made me feel like shit. Then again, so did the Tiger Mom treatise and, more recently, the book about how superior French parents are to me. Why so little faith in my own decisions?

My mom, on the other hand, never regretted her estrogen shots or worried that baby formula had made me fat. Yet she absolutely loved the idea that I nursed her grandkids. For a baby shower, she gave me cloth diapers. My mom even managed after a while to stop making negative comments about mothers who didn't go to work every day. These weren't slights against me -- just an old habit from when she had to defend mothers who did.