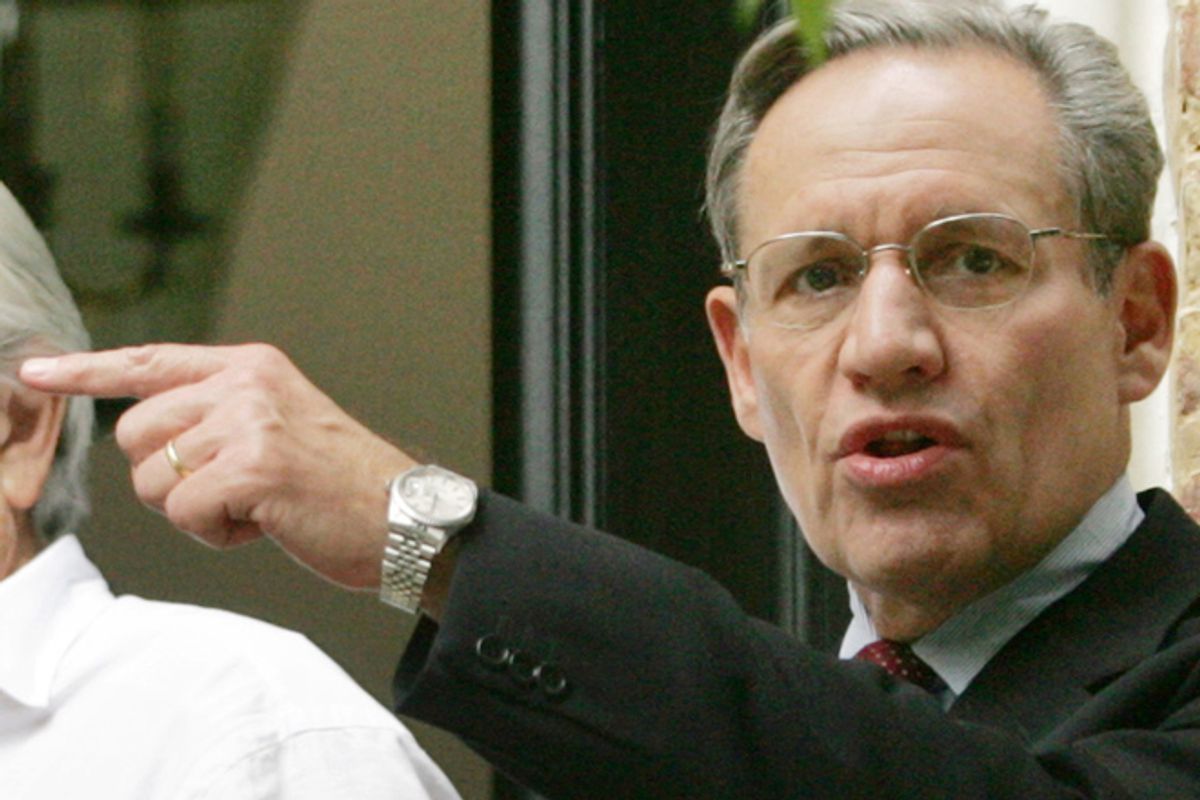 Bob Woodward is maybe the most famous reporter in the world, entirely because of the criminality -- and staggering incompetence -- of Richard Nixon and his cronies. Woodward and his (more lovable) partner Carl Bernstein are the official "reporters who broke Watergate," because while many other reporters working for numerous other publications did Watergate reporting that was, arguably, just as revelatory and important, Woodward and Bernstein wrote The Book that became The Movie, establishing them forever as legends of investigative journalism. It didn't hurt that their narrative of their own investigation into Watergate was so cinematic and thrilling -- code names and secret spy signals for sources! -- and that Woodward followed up that early success by eventually becoming a sort of semi-official Court Reporter of Washington Presidencies.

His reputation is built on his Watergate reporting, and so he has been very defensive about his Watergate reporting. New York magazine this week has an excerpt from a book by Jeff Himmelman in which Himmelman, working from the personal archives of former Washington Post executive editor Ben Bradlee, catches "Woodstein" in a bit of misdirection about a source in "All the President's Men," and then makes Woodward extremely uncomfortable about the veracity of some of the book's other claims.

The main point of contention is a woman Woodward and Bernstien refer to as "Z." "Z" only features on a few pages of the book, but Woodward said in 1976 that she had provided vitally important leads. The book also says, and Woodward and Bernstein both always insisted, that no members of the Watergate grand jury agreed to speak to the reporters, even after they received permission from Bradlee to skirt the law and attempt to contact them. But "Z," it turns out, was a grand juror. It says so plainly in a memo, apparently typed by Bernstein, found in Bradlee's old files.

The reporters carefully hid any indication in the book that "Z" was a grand juror. They claim they did so to protect her identity, but of course it had the ancillary benefit of not revealing that they themselves may have violated the law. Bernstein is a little more sanguine about this revelation than Woodward:

When I had a conference call with Carl and Bob last week to ask them to comment on Z’s identity, they conceded that she was a grand juror, but insisted that Carl hadn’t known it when he first went to visit her and said they’d disguised her only to protect their source. They said they’d long since forgotten the episode. “This is a footnote to a footnote,” Bob protested. But perhaps the most telling moment had occurred when I reached Carl on his own, earlier that day. Right before we hung up, he had said, wryly, “Maybe they’ll send us to jail after all.”

The two wrote a response to Himmelman that New York magazine has also printed, in which they claim that they forgot "Z" was a member of the grand jury, and dismiss her contribution to their reporting as minimal. She didn't break major news to them, but in the book she serves as very good atmosphere -- there is an offhand reference to "her boss" that leaves the reader assuming she works in the upper reaches of the government, for example -- and it is that book's atmosphere that makes it so readable and thrilling. It is also that book's atmosphere -- the hazy subterfuge and paranoia and midnight meetings and veiled threats -- that Bradlee himself found a bit suspicious, according to a 1990 interview Himmerlman found:

Later in the interview, Ben talked about Bob’s famous secret source, whom he claimed to have met in an underground garage in rendezvous arranged via signals involving flowerpots and newspapers. “You know I have a little problem with Deep Throat,” Ben told Barbara.

The rest of the New York excerpt deals with Woodward's hysterically defensive response to reading this quote. He does everything he can to stop Himmelman from printing it, including outright begging. Bradlee never says outright that he suspects Woodward of sexing up his story, but he never denies it as a possibility. This enrages Woodward. And Woodward is still mad, and he is making the media rounds to make sure everyone knows that he is mad.

He is sending the Post transcriptions of interviews between Bradlee and Himmelman (how did he get them?) in which Bradlee says he doesn't think Woodward "embellished," but one can not think he embellished while still allowing that it's possible he did.

Woodward is overreacting ferociously, perhaps because he fears for his legacy. The revelation of the identity of Deep Throat made it quite easy to see when Woodward had lied to throw people off the trail. (W. Mark Felt, notably, quit smoking 30 years before he met Bob Woodward, who referred to Deep Throat as a heavy smoker.) And Woodward had protected Deep Throat as a source not solely to shield the brave whistle-blower from retribution, but in part so that he wouldn't have to reveal that his anonymous source had blabbed because he was pissed at not getting a promotion.

We now all know, in other words, that Bob Woodward is a sketchy reporter. This has always been the case. All of his post-Watergate books feature ridiculous, clearly invented (or "embellished") internal monologues, and re-creations, with quotation marks, of scenes he couldn't have witnessed or recorded. He is shady about his sources, even to his editors, and because he is so well-sourced, he is always sitting on important information that he refuses to divulge, to protect his powerful sources. His depressing flailing about the periphery of the Plame affair -- Woodward was the first journalist to learn that Joe Wilson's wife worked for the CIA, and Woodward declined to mention his knowledge to his bosses or anyone else for months after the story broke, for fear of getting subpoenaed -- was proof that his balancing of his responsibility to the public and his responsibility to his sources had become, or perhaps always was, severely out of whack.

I think that Woodward has enjoyed a lack of critical attention for years now, as he's basked in the glow of his staggering professional success, and he is terrified that he'll be remembered not as the greatest investigative reporter of the 20th century, but instead as the ultimate reporter as pawn of the truly powerful.