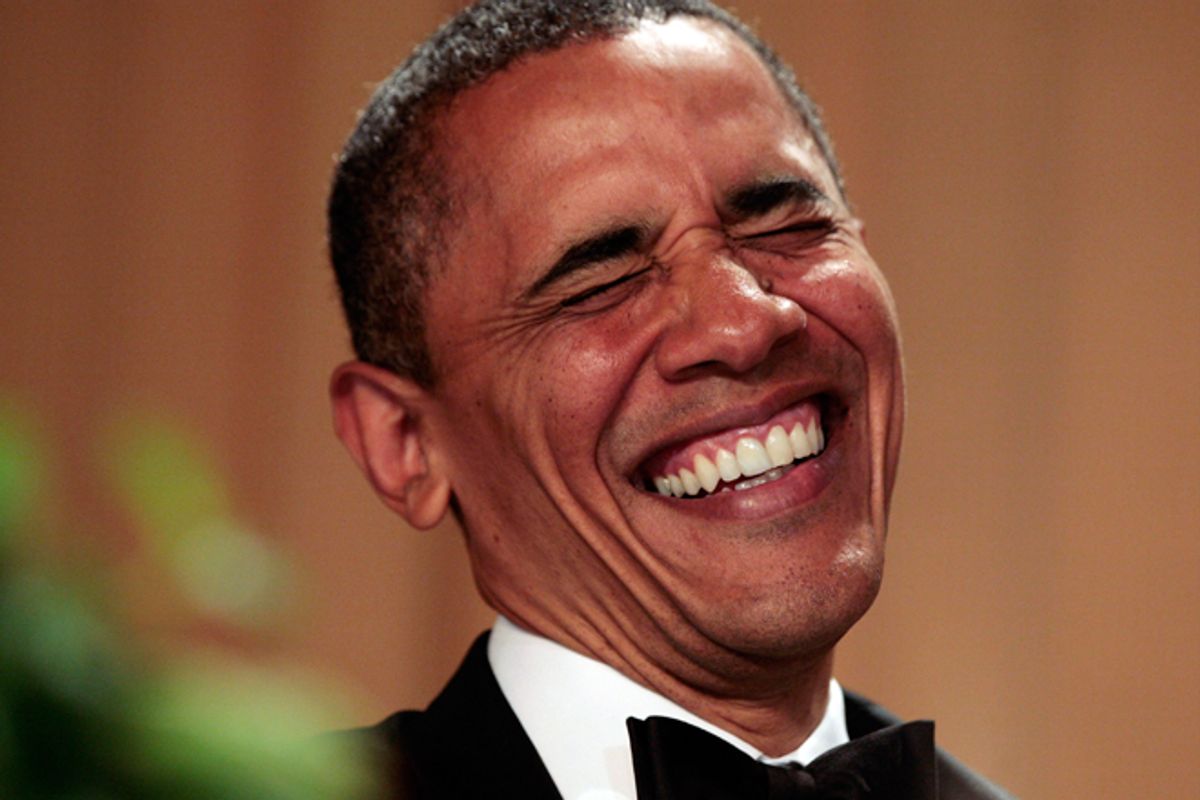 For a world that feared (and in some cases, cheered) the prospect of American decline, this holiday season has been bracing. It showed that despite U.S. political and economic difficulties, President Obama is still able to rally support at home and abroad for a strong foreign policy. . . . The White House cites eight specific foreign policy gains over the past two months. . . . What has been notable about the recent foreign policy moves is that they have allowed Obama to show some backbone . . . The foreign policy challenges of the past two months were also the first test of the new national security adviser, Tom Donilon. True to his reputation as a political "Mr. Fix-It," . . . he ran a smooth and seamless policy process, without the competing voices that have sometimes been heard over the past two years.

President Obama is less comfortable with exercising power publicly than privately, said David Ignatius, associate editor and columnist for The Washington Post, at a Shorenstein Center event. "As covert Commander-in-Chief, [Obama] has been quite effective," he continued. While he is "reticent, reluctant to use the public political tools of power, in private...he is quite decisive." . . . Ignatius concluded that the president has "learned a lot," and if reelected, will return to many of the same issues in his first term, but this time, "with more discipline and realism."

Before his death, Osama bin Laden boldly commanded his network to organize special cells in Afghanistan and Pakistan to attack the aircraft of President Obama and Gen. David H. Petraeus. . . . The scheme is described in one of the documents taken from bin Laden's compound by U.S. forces on May 2, the night he was killed. I was given an exclusive look at some of these remarkable documents by a senior administration official.

Washington Post columnist David Ignatius has been on a tear lately: breaking news on the files found in Osama bin Laden's Abbottabad safe house, revealing details of the backchannel negotiations between Erdogan and Ayatollah Khamenei, and now, channeling the Obama administration's negotiating strategy toward Iran. . . . . Iggy has always been known for his top-notch sources, especially in the intelligence community, but his columns seem especially well-sourced of late -- it's almost as if he has a weekly lunch with Tom Donilon or something. . . . All of which is a long-winded way of saying that if you want to know what the Obama administration is thinking, read David Ignatius.

[Ignatius'] emergence as the administration’s go-to guy with those twin bombshells has cemented his standing as the nation’s preeminent writer on national security affairs and, at the same time, rekindled a debate over the value of White House-directed "access journalism" that can make cheerleading reporters (and columnists) seem more like uncritical spokesmen than truth-tellers. . . . “David is not only influential, he’s a serious journalist who is taken seriously,” an Obama administration official told POLITICO. . . . Melvin Goodman, a senior fellow at the Center for International Policy and a former CIA analyst, once called Ignatius “the mainstream media’s chief apologist for CIA crimes."

At the White House on Monday, President Obama will seek to persuade the Israeli prime minister, Benjamin Netanyahu, to postpone whatever plans he may have to bomb Iran's nuclear facilities in the coming months . . . . In the most extensive interview he has given about the looming Iran crisis, Obama told me earlier this week . . . .The 45-minute Oval Office conversation took place less than a week before the president was scheduled to address the annual convention of AIPAC . . . .

The growing skepticism about Obama’s chances for success in Afghanistan is largely based on deep misreadings of both the country’s history and the views of its people, which are often compounded by facile comparisons to the United States’s misadventures of past decades in Southeast Asia and the Middle East. Afghanistan will not be Obama’s Vietnam, nor will it be his Iraq. Rather, the renewed and better resourced American effort in Afghanistan will, in time, produce a relatively stable and prosperous Central Asian state.

Liberals helped to elect Barack Obama in part because of his opposition to the Iraq war, and probably don’t celebrate all of the president’s many military accomplishments. But they are sizable. Mr. Obama decimated Al Qaeda’s leadership. He overthrew the Libyan dictator. He ramped up drone attacks in Pakistan, waged effective covert wars in Yemen and Somalia and authorized a threefold increase in the number of American troops in Afghanistan. . . . From both the right and left, there has been a continuing, dramatic cognitive disconnect between Mr. Obama’s record and the public perception of his leadership: despite his demonstrated willingness to use force, neither side regards him as the warrior president he is.

As U.S. Navy Seals burst into his fortress-like compound in Abbottabad, Pakistan, nearly one year ago, Osama bin Laden turned to the youngest of his four wives and said his last words: "Don’t turn on the light." That detail and a number of exclusive insights into bin Laden’s life and death in Abbottabad are contained in our cover story this week by Peter Bergen, which marks the anniversary of the raid. . . . We also have a copy of the memo then-CIA chief Leon Panetta jotted down moments after receiving the President’s orders to launch the raid, memorializing for the record the action orders.

I could spend the rest of the day doing this; this doesn't even include the MSNBC personalities who spend every day of their lives, literally, praising the President and attacking his political opponents and are then amply rewarded with all sorts of "exclusive" interviews with White House officials and Obama campaign aides, which are exactly as hard-hitting and adversarial as you'd expect. This dog-training treatment of media figures was just as prevalent -- and just as effective -- during the Bush years (although, as someone with many dogs, I can honestly say that actual dogs are much more difficult to train than these journalists, who just need one or two biscuit crumbs in exchange for life-long devotion and obedience).

This weekend, the annual White House Correspondents' Dinner was held, and it is -- as Gawker's Hamilton Nolan explained in the best analysis ever of that event -- the purest expression of the total blending of political power, media subservience, and vapid celebrity in one toxic, repulsive, and destructive package. It's imperial rot -- the Versailles virus -- in its most virulent form. Of course, Stephen Colbert, in the best political speech of the last decade, used his appearance at that banquet in 2006 to clearly set forth the rules by which they function:

But, listen, let's review the rules. Here's how it works. The President makes decisions. He's the decider. The press secretary announces those decisions, and you people of the press type those decisions down. Make, announce, type. Just put 'em through a spell check and go home. Get to know your family again. Make love to your wife. Write that novel you got kicking around in your head. You know, the one about the intrepid Washington reporter with the courage to stand up to the administration? You know, fiction!

None of that has changed. When I first began writing about politics, I mistakenly thought that the bias of the Bush-worshipping establishment media was a pro-GOP bias. It isn't (and it's obviously not a "liberal bias"). That's not how they function. They aren't nearly so substantive as to be driven by any sort of belief or ideology or anything like that. Their religion is the worship of political power and authority (or, as Jay Rosen says, their religion is the Church of the Savvy). Royal court courtiers have long competed with one another to curry favor with the King and his minions in exchange for official favor, and this is just that dynamic. Political power is what can give them their treats -- their "exclusive" interviews and getting tapped on their grateful heads to get secret documents and invited to White House functions and being allowed into the sacred Situation Room -- so it's what they revere and serve.

There are many words for this behavior. "Adversarial," "independent," and "watchdog" are, manifestly, not among them. But it produces many personal rewards for them. It's what David Halberstam meant when he spoke to Columbia Journalism School students less than a year before his death in 2007 and said: "By and large, the more famous you are, the less of a journalist you are." He added: "One of the things I learned, the easiest of lessons, was that the better you do your job, often going against conventional mores, the less popular you are likely to be. (So, if you seek popularity, this is probably not the profession for you.)." One could similarly say: the more the White House chooses you for all sorts of rewards, invitations, access and favors, and the more praise it lavishes on you, the less of a journalist and the more of a state propagandist you are.