The deaths of innocent Pakistani civilians turned Shahzad Akbar from a U.S. friend to full-time critic 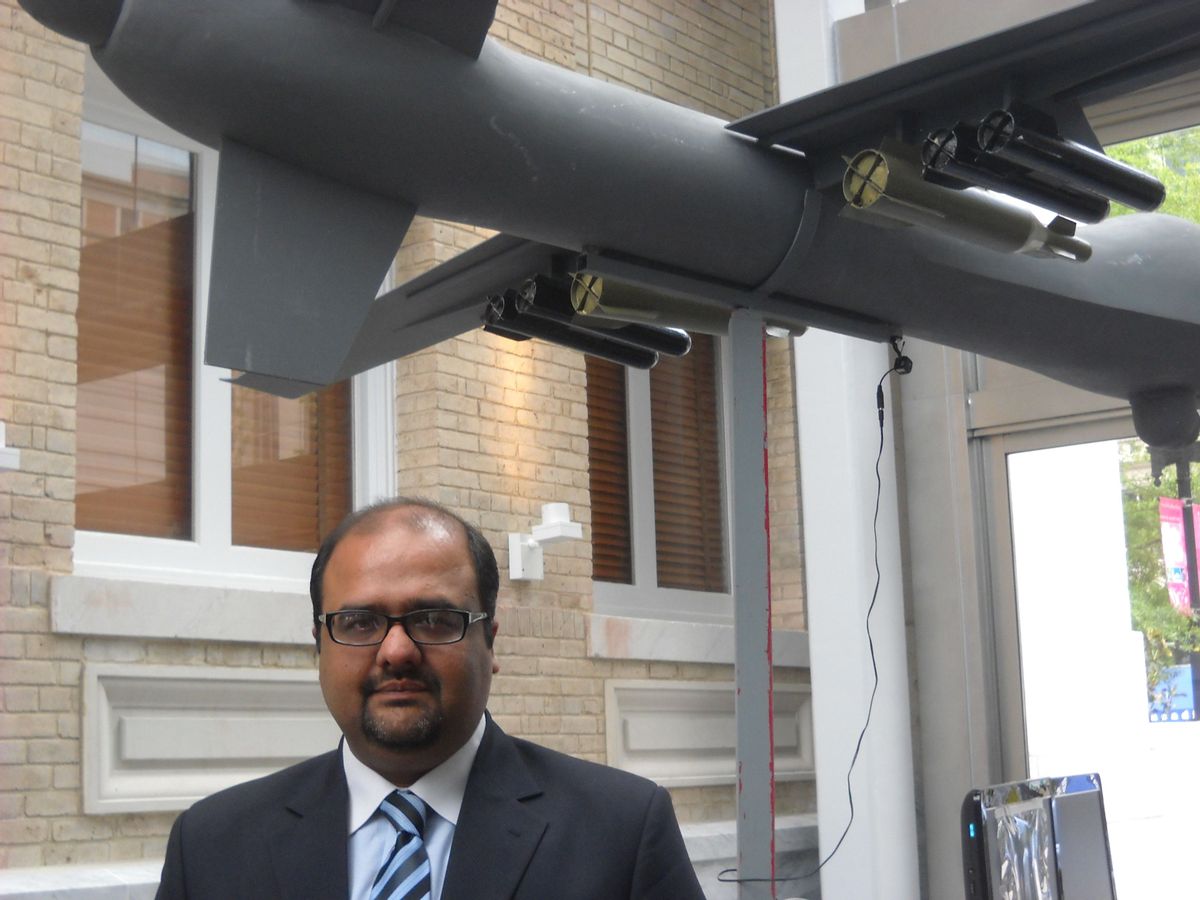 If you want to see how President Obama's drone war efficiently turns America's friends into adversaries, meet Pakistani attorney Shahzad Akbar. After getting his legal education in the United Kingdom, Akbar returned to his native Islamabad to practice the kind of corporate and public accountability law that the U.S. says its hopes to encourage in Pakistan. He worked with the U.S. Agency for International Development on trade issues. While prosecuting a Pakistan consular officer who was selling visas, he coordinated his case with the FBI.

Then came the Obama administration's escalation of the drone war. Now Akbar is a full-time critic of the U.S. government who was repeatedly denied a visa to visit Washington. After a spate of news articles, Akbar was granted permission to travel to Washington this weekend, where he warned Americans about the consequences of a remote control war where no U.S. lives are lost and Pakistani civilian casualties are routinely downplayed.

In his remarks Saturday to the "Drone Summit," sponsored by Code Pink and the Center for Constitutional Rights, Akbar traced his transformation to a conversation he had three years ago with Karim Khan, the brother of a schoolteacher who died in 2009 in one of the 300 drone attacks along the Afghanistan border that have killed more than 3,000 people since 2004.

"He convinced me we had to do something because there are so many civilians being targeted and being thrown into militancy and extremism because the rest of the country and world are not listening to them," Akbar told the conference attended by 150 people. In a region where schools are rare, he said the U.S. attack devastated a "progressive family" that promoted education.

While continuing to practice law, Akbar helped organize a demonstration in 2009  publicly identifying the chief of the CIA station in Islamabad, who plays a central role in the missile strikes against suspected anti-U.S. terrorists. By 2010, he was representing "dozens of families" who have lost relatives in the strikes and he put aside  his corporate law practice in favor of working full time against U.S. drone war. Now Akbar  is preparing a lawsuit against the Pakistan foreign minister demanding the expulsion of U.S. ambassador Cameron Munter who is believed to play a a consultative role in the drone strikes launched by the CIA. His clients, he says, are the the "voiceless" people of Waziristan, the region targeted by U.S. policymakers.

"No one cares to give them names or identities just the label of 'militants' and that is enough to kill them and then justify that killing," he said.

Akbar rejected Obama administration officials claims that civilians are not being killed in the strikes. "They are lying to their own people," he said.

As proof he showed a picture of 16-year-old Tariq Azziz, who traveled eight hours to Islamabad to attend a conference on drone strikes last October, sponsored by Akbar's Foundation for Fundamental Rights and the British humanitarian group Reprieve. Azziz and other attendees from Waziristan were given cameras and training so that they could document the effects of drone strikes. Three days later, Azziz and his 12-year-old cousin were killed by a Hellfire missile.

Akbar told the story of a college student named Khairullah whose twin brother was killed in a drone strike in November 2010. After the death of his brother, he has never stepped back to school since," Akbar said. "I really fear if we are not able to do anything for him to get justice, he might just shift to the other side. He is at the age when he is full of energy and wants to see justice done."

Akbar said many children have been killed. (The London-based Bureau of Investigative Journalism which monitors news reports of the attacks, says 174 children have been killed since 2004.) Akbar showed a photo of a 10-year-old boy killed by missile shrapnel from an August 2010 strike in north Waziristan against houses said to be inhabited by members of the anti-American Haqqani network. The boy is survived by three brothers and sisters.

"What will they do when they grow up?" he asked. "What will they think of us Pakistanis and the Americans? How are we making U.S. and other countries safer by leaving these children without justice?"

Akbar showed a picture of child killed in an attack on Valentine's Day 2009 when he said, "I'm sure some remote pilot somewhere in U.S. was planning what he would buy for his girlfriend or his wife before he pushed the button," he said. The strike destroyed a house next door that the U.S. said was occupied by a militant.

"People in the United States need to understand your polices have far reaching impact," Akbar said. "You need to ask what are the rules and procedures for the strikes? What is the definition and the threshold of a militant? These people are being killed in your name. This is not making America safer… The strikes are just creating more enemies for you. They are not making you safer. They are just putting a target sign on you," he said.

A few hours after later Reuters reported that the U.S drones had struck again. It was said four "suspected militants" were killed while hiding inside a high school. In Washington, a senior official told the New York Times described the building as as a “staging and planning area for Al Qaeda, the Haqqanis and other terrorists.”

No civilian casualties were reported.