Updated: The fashion mogul has backed off his assault on schoolteachers after a public outcry 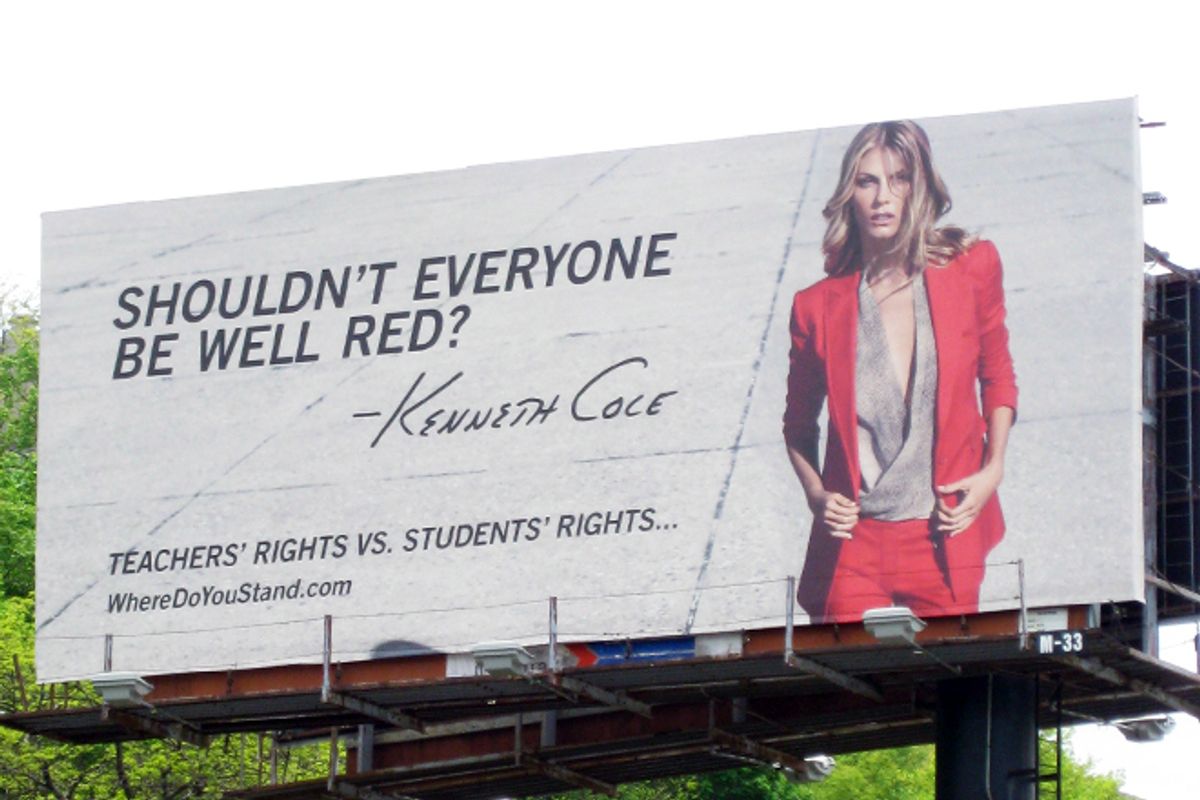 It was always bound to go there, but few likely expected it would be so blatant. I'm talking about the ongoing campaign against organized labor; for decades deeply rooted in American political culture, the crusade has been periodically amplified in popular culture as well, from 1954's "On the Waterfront" all the way to the Sopranos' depiction of mob-controlled unions (and sometimes pop culture and political culture have even fused). So it was only a matter of time before vilifying rank-and-file union members would be commodified into a consumer brand by a company looking for an edge in the high-end retail market.

That's where Kenneth Cole now comes in. The clothing designer has just launched a new crusade to tie his expensive clothing and shoes line to the elite's movement du jour: the fight to demonize public schoolteachers and their unions. In a billboard and Web-based campaign, Cole's foundation portrays the national debate over education as one that supposedly pits "Teachers' Rights vs. Students' Rights."

"Should underperforming teachers be protected?" asks the foundation's website.

When asked about the campaign, one of Cole's spokeswomen insisted the company isn't trying to insult teachers or unions, saying, "It’s something in the news and being debated, and we wanted to provide a forum where people could discuss it as well." But with the company using the same loaded language as the conservative political activists trying to undermine public education and teachers' unions, the corporate P.R.-speak is, to say the least, unconvincing.

No, Cole's campaign is thinly veiled ideological propaganda, and it comes with myriad problems, not the least of which is the simple fact that almost nobody believes "underperforming teachers" should be protected. That includes the nation's biggest teachers' unions, which have been outspoken in backing "accountability" reforms for teacher tenure. So right off the bat, Cole is constructing a straw man, one that has served over the years to pretend that public employee unions in general and teachers' unions specifically are about nothing more than making sure bad employees get to keep their jobs.

Of course, there is a legitimate debate among state lawmakers and school boards about how to determine what an "underperforming teacher" is. Should a teacher be considered subpar if her students perform poorly on standardized tests? Should any teacher-to-teacher peer review be included in performance evaluations? And should any factors other than tests and grades -- say, student poverty levels -- be considered when using student achievement to judge a particular teacher?

As evidenced by the language of his new campaign, Cole, like the anti-union activists in the larger corporate-sponsored education "reform" movement, doesn't want those questions asked, much less answered, for pondering them raises the very queries about power and wealth that Cole's fellow 1 percenters don't want to discuss.

For instance, actually taking an honest look at America's education system brings up queries about why other less economically stratified nations have unionized teachers and far better academic results than here in America. It also forces us to ask why it just so happens that wealthy unionized districts in America do so well -- but poorer districts have such problems. All of that consequently compels us to consider issues like poverty and funding disparities between rich and poor districts -- issues that inherently threaten the status quo, and thus the interests of the super-wealthy. And so under the veneer of the term "reform" and with the backing of seemingly altruistic philanthropy via foundations like Cole's, the super-wealthy work to avoid substance and instead define the education policy discourse on reductionist slogans like "underperforming teachers."

Perhaps the biggest problem with Cole's campaign, though, is how it forwards the "us-versus-them" notion that teachers' rights to due process in the workplace are automatically at odds with their students' interests. This so fundamentally misunderstands how education works that it perfectly underscores why a clothing corporation doesn't have much credibility on education issues.

Think about it: We need our best teachers to work in the public schools that educate the most at-risk populations. Why? Because with decades of social science research proving that achievement is driven mostly by out-of-classroom factors (poverty, family dysfunction, etc.), those are the schools that need the most skilled pedagogues to overcome comparatively difficult odds for success. But why would a good teacher opt to work in such a school without basic protections -- protections designed to make sure the at-risk population's achievement-suppressing disadvantages aren't used as a rationale to fire her? She probably wouldn't.

In this way, "Teachers' Rights vs. Students' Rights" is the mirror opposite of how things actually work. Without extending teachers' rights to, say, be evaluated fairly or to challenge a termination, it would be difficult -- if not impossible -- for public schools to recruit the best teachers to the specific at-risk schools that need them the most.

Most likely, these inconvenient truths are of little concern to someone like Kenneth Cole. According to Gotham Schools, he sends his kids to private school, making him part of the larger trend of elites who are trying to foist radical policies onto public schools, knowing their own kin won't be hurt by those policies.

But, you ask, wouldn't a clothing mogul with no kids in public school be averse to a divisive crusade against teachers, if only to circumvent a controversy? Even if he is a political activist, wouldn't he refrain from such a campaign for fear of losing customers?

These are fair questions, and they highlight how Cole's campaign may say something hugely important -- and troubling -- about the long-term future of education politics in America.

Recall that Cole is in a zeitgeist industry that is all about lashing branded chic to the popular fad of the moment. That means his move probably reflects what he believes to be an ascendant cause célèbre -- one that he thinks he isn't joining in spite of his company, but in support of its profit-making objectives. Put another way, he probably believes he will gain customers if he ties his company to anti-teacher, anti-union themes.

Sure, that gamble could be wrong -- and I hope it is. I hope America sees just how wrongheaded and ideologically extreme the crusade against public schools, teachers and unions is.

But as a successful mogul, Cole's clearly got skill as a cultural seer; and if someone like him sees mass profit potential in not-so-subtly bashing teachers and unions, it's a scary sign that such unhinged anti-teacher sentiment could be going more mainstream than ever.

Update: After a mass outcry from teachers, Kenneth Cole announced on Twitter Monday that it is removing the billboard. In its statement, the company said "We misrepresented the issue - one too complex for a billboard - and are taking it down." It has also taken down the campaign on the accompanying website.