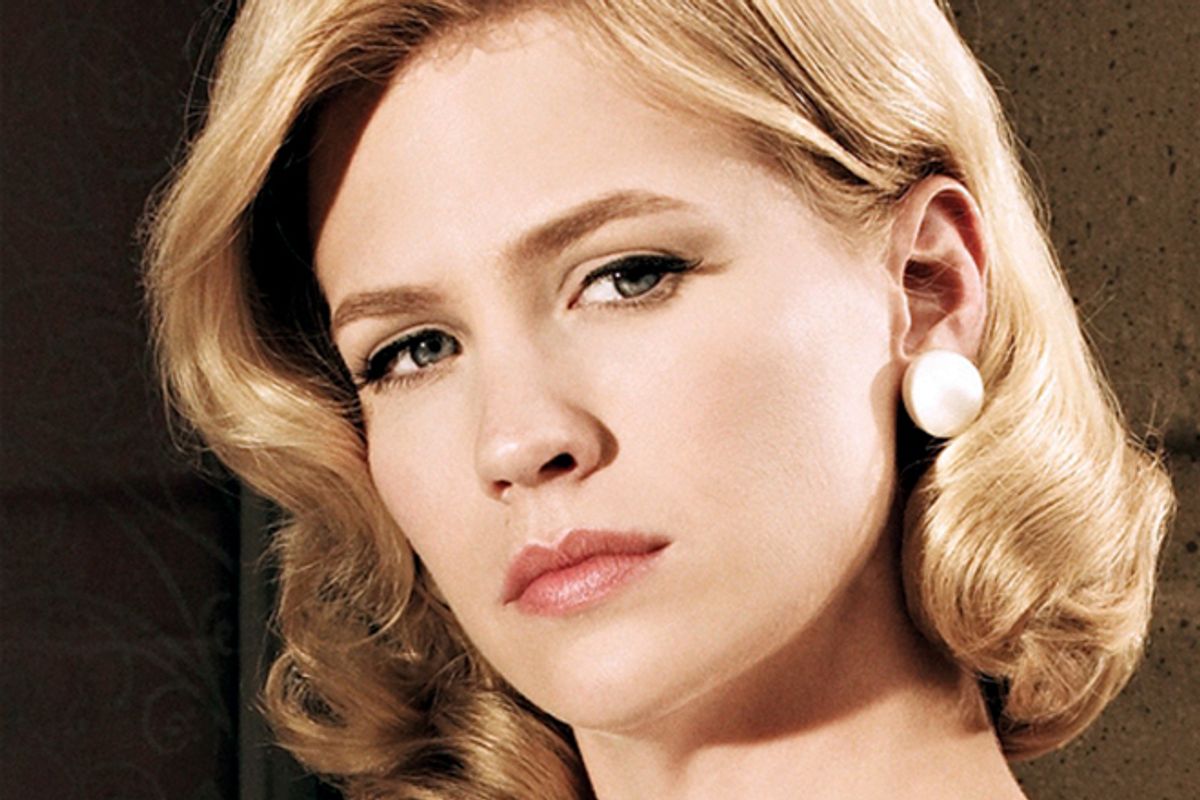 “Mad Men” and ABC’s romantic-detective procedural “Castle” don’t seem to have much in common: One is the best show on television, and the other is a perfectly serviceable will-they-won’t-they series on ABC. But both “Mad Men” and “Castle” (which airs its second-to-last episode of the season tonight) contain frosty, unlikable, not-very-good actresses in pivotal roles — January Jones as Betty Draper and Stana Katic as Detective Kate Beckett, the romantic lead playing across from the antic Nathan Fillion — and it hardly matters to the series’ well-being at all.

Betty is a very interesting character, but having seen Jones on “Saturday Night Live" and in “X-Men: First Class,” in which she could barely play an actual Ice Queen, I have no lingering doubts about her skill set. Meanwhile, the consistently rated “Castle” has gained quite a following, despite the fact that Katic makes the main character on “Bones,” who is supposed to fall somewhere on the autism spectrum, seem emotionally intuitive and empathic. My point here is not to rag on Jones and Katic, so much as marvel at how little their failings have mattered to the shows they work on. Television is very kind to bad actors.

In a movie, an actor has approximately two hours to convince the audience of his or her skill. They only get one shot at us, and if they’re unnatural or uncomfortable, overly mannered or under-emotive, we won’t connect to or care about them. They will have failed to do their job, and we will see them for what they are: bad.  TV is a whole other story. Actors have multiple episodes to hone their performances, and even if each installment is far shorter than a movie, it’s also contained. It films, it finishes, the actors can see it and take notes. Over the long run of a series, many initially not-so-great actors have dramatically improved — think of Taylor Kitsch on “Friday Night Lights,” Tina Fey on “30 Rock,” or Courteney Cox on “Friends” — just as their writers learn to create material that plays to their strengths, giving them the story lines and jokes best suited to them.

But while the actors and the writers are getting better, the audience is also doing work. As a show goes on, we start to think of bad acting as a character trait, and stop seeing it as the performer’s lack of skill. "Mad Men’s" Betty Draper is emotionless and unreadable because Betty has been infantilized her whole life by a sexist society that has rewarded her for being pretty, not interesting — not because January Jones can only play one note. "Castle’s" Katic is stilted and stiff because her character, Kate Beckett, is uptight and traumatized — not because Katic can’t express feelings and wouldn’t have chemistry with a bottle of peroxide. "Friday Night Light’s" Julie Taylor is oddly unknowable because she’s young and immature (despite having three to four times as much screen time as "FNL" characters we know intimately), not because Aimee Teegarden isn’t up to the level of her costars. (Though the aforementioned examples are all actresses, men fall into this category too: Like David Boreanaz in "Bones" or Winston on "New Girl.")

Because an audience can contextualize bad acting, it comes at no real cost to the show. Jerry Seinfeld and his always-about-to-laugh, isn’t-it-crazy-I’m-on-camera face may have been one of the most consistently mediocre acting performances of all time, and it didn’t hurt “Seinfeld” much, if at all. We all know people who are always about to laugh at their own jokes, right? (Thinking up other mediocre actors who didn't ruin their shows over the course of TV history is a pretty fun game: The category includes, but is certainly not limited to, Mischa Barton in "The OC," Billy Campbell in "Once & Again," and Mel Harris in "Thirtysomething.") "Mad Men" would be an entirely different show if January Jones were a warmer, more charismatic performer, but it’s hard to argue it would be better. Despite Katic’s robotic performance, I still wish Nathan Fillion’s character would give her a big ol’ smooch. And with all those gangbusters scenes with Mr. and Mrs. Coach, it took about three seasons for it even to become clear Teegarden was out of her depth.

It’s a cliché that viewers treat TV actors differently than movie ones. Small-screen performers constantly tell stories about fans approaching them as if they were their character, and advising or chastising them accordingly. The TV star, unlike the movie star, is someone audiences see in their homes week after week. Like the friend, relative or acquaintance who always mumbles, or freezes up in social situations, or can't stop trying so hard, or refuses to open up, a TV performer is someone audiences can learn to accept, flaws and all. A TV gig: not bad work, especially if you're a bad actor.