What to expect on May Day

No one knows quite what Occupy's general strike will look like, but police are reportedly preparing for action 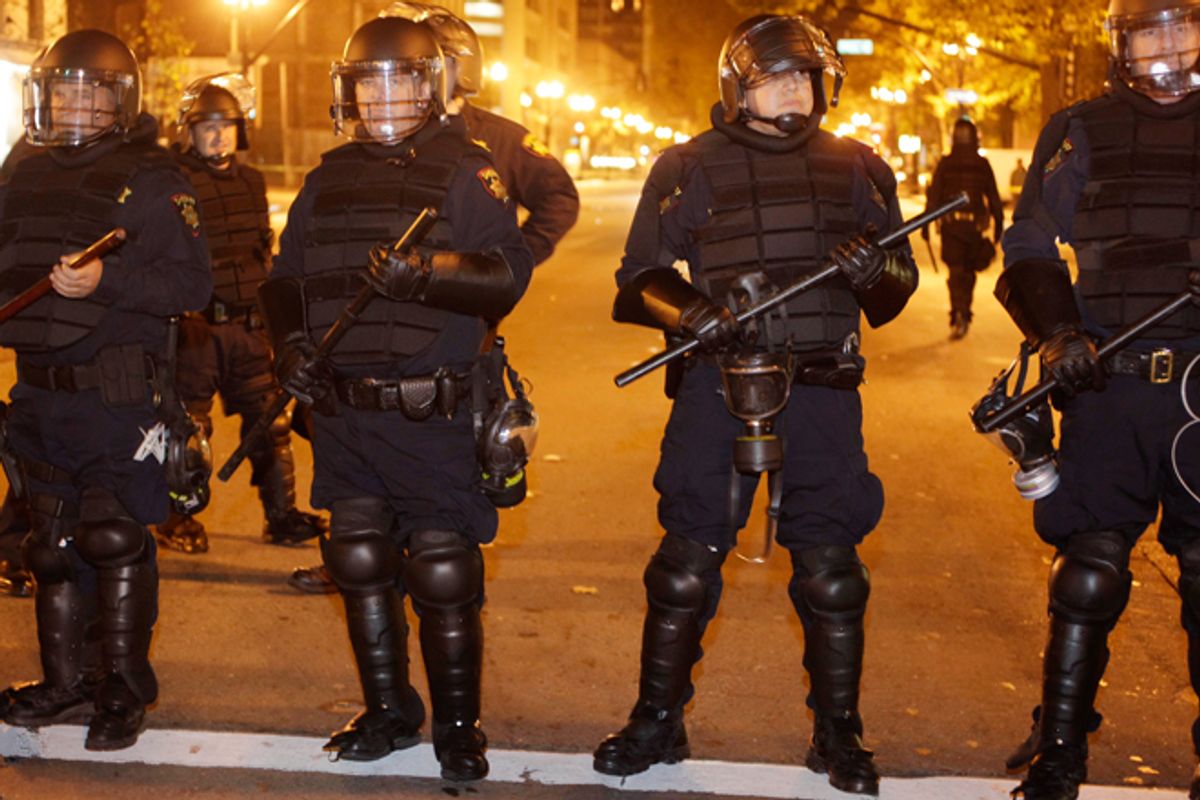 With just one day to go until May Day, the Occupy-planned general strike remains a largely unknown quantity. How many people will skip work to take to the streets? The Occupy call, which has gained support from numerous labor and immigrant justice groups, reads "No Work, No School, No Housework, No Shopping. Take the Streets!" It's just a matter of hours before we see whether and how it will be answered.

I have written here at some length against judging this May Day by standards of traditional general strikes -- not seen in the U.S. since the 1940s -- or contemporary mass strikes in Europe, where unions have not been politically pummeled into weakness, as they have in this country. And although pundits are looking at May Day as a referendum on Occupy's relevance, it's unclear what success in this case means or would look like. Marches (both permitted and un-permitted), free meals, teach-ins, college student and high-school walkouts and roving dance parties have been scheduled in 115 cities around the country. Rage Against the Machine guitarist Tom Morello and other well-known musicians will be joining a "guitarmy" -- 1,000 guitarists marching (and strumming) from New York City's midtown to Union Square. Clearly, the general strike organizers in New York are less interested in affirming the strength or relevance of a movement than they are in experimenting with new tactics. Still, there's a feeling that somehow, and in some bold way, it's got to be big.

Eyes will be on New York and the Bay Area when it comes to setting the tone. On the West Coast, a major May Day plan has already changed at the last minute. The plan had been to shut down the Golden Gate Bridge in support of bridge unions, which have been without a contract for a year. The Golden Gate Bridge Labor Coalition renounced its original bridge blockade plans on Saturday, however, asking supporters instead to join its hard picket lines shutting down ferries and buses (the coalition of bridge worker unions will be striking that day). The Port of Oakland Longshoremen have called for a daytime work stoppage and over 4,000 Bay Area nurses also without a contract will be striking, although the majority of May Day activity has been outside of union organizing.

In New York, back-to-back (and overlapping) actions will be taking place across Manhattan and in some outer-borough areas. Numbers in the tens of thousands are expected at a permitted "solidarity march" in the afternoon from Union Square to Wall Street, jointly organized by OWS, the Alliance for Labor Rights, Immigrant Rights, Jobs for All and the May 1st Coalition. Organizers have been keen to stress that different marches and actions carry different levels of risk. Schedules demarcate rallies as permitted or unpermitted, or "green" or "red" (from a color-code for assigning risk dating back to the late '90s anti-globalization movement) -- enabling individuals with, say, precarious immigration statuses, to avoid activities that might put them at risk of deportation.

There will be unpermitted, unpredictable actions a-plenty -- including an autonomously organized Wild Cat march, with the "wild cats" consisting of various anarchists, anti-capitalists, anti-authoritarians and their allies, beginning in Manhattan's Lower East Side. Its call states, "if we wanted to protest we could carry a sign and walk within police barricades, safely cordoned off in a free speech zone. On May 1st, we aren’t working and we aren’t protesting. We are striking."

Much of the activity will depend less on the strikers themselves than on the police response and crackdown. The Village Voice's Nick Pinto noted on Twitter Sunday that according to a "well-sourced" colleague, the NYPD assigned to cover May Day demonstrations "have been ordered to bring 'hats and bats'." Conveniently, New York will see increased security and police vigilance on May 1, following warnings from the FBI and Department of Homeland Security about potential terror risks on the anniversary of Osama Bin Laden's death (even though the Al Qaida leader was actually killed on May 2. and Police Commissioner Ray Kelley notes there is no known terror threat to the city). At a Sunday press conference, Mayor Michael Bloomberg said, with regards to policing on May Day, "We will do what we normally do and find the right balance." So if we are to go by the normal police response to Occupy mobilizations in New York, we can expect vast police presence, mass arrests, aggressive crowd handling, swinging batons and pepper spray at the very least.

In my view, there is little point in predicting in advance what the May Day General Strike will do. As I argued, writing in the most recent n+1 Occupy! Gazette, Occupy’s zeitgeist-shifting events have never gone according to plan. Even setting up camp at Zuccotti Park -- the unmiraculous corporate plaza, which became the epicenter of a radical political opening -- was a backup plan after the first choice spot in Downtown Manhattan was blocked by police on September 17.  And so I'll repeat here what I wrote in Occupy!, I don't know what a success might look like on Tuesday, rather "I hope for a May Day, which— like other Occupy actions have—re-orients how we feel about failure and success altogether."