Whether Occupy-supporting journalists should strike is complicated, but I will not be reporting or tweeting 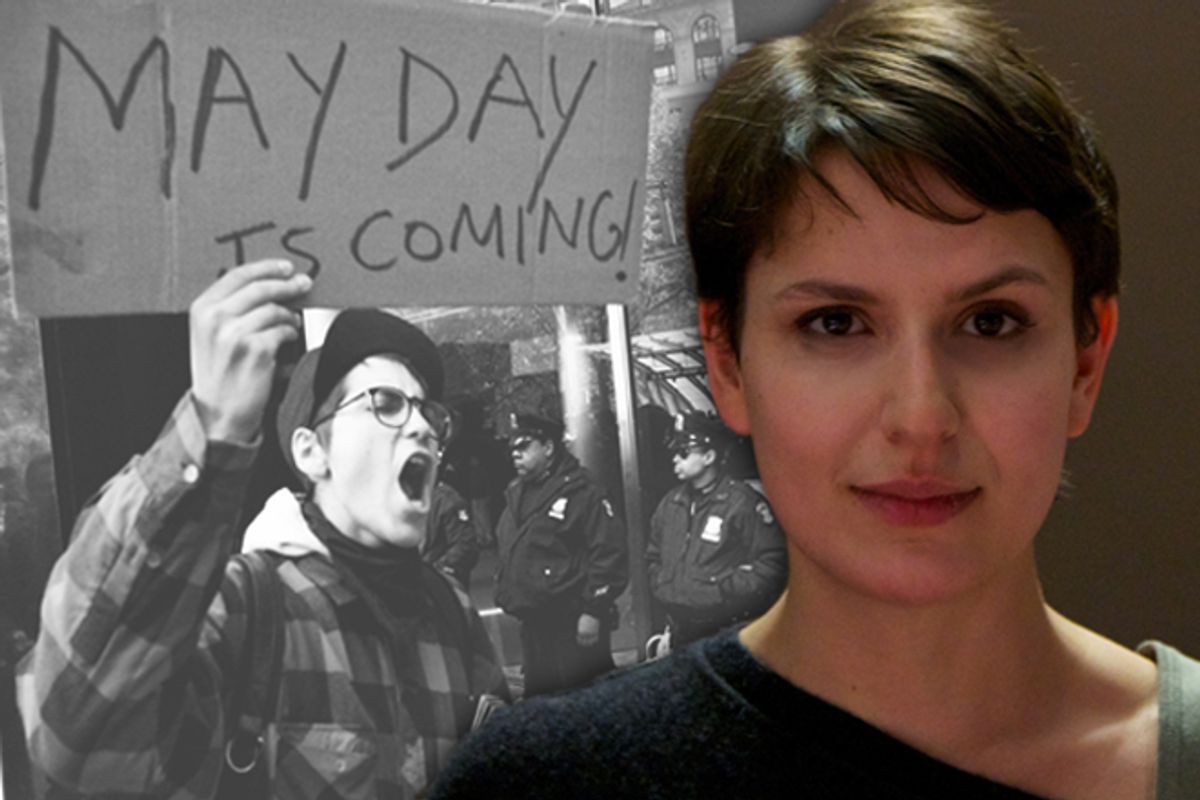 Tomorrow, during the Occupy-planned May Day general strike, if you come to Salon for live coverage, you will find no reports from me. If you want to follow my Twitter feed to check up on the action in New York, you'll find the feed ends on April 30. On May 1, I'm going on strike -- no reporting, no filing, no live tweeting; I'm leaving press identification at home.

You might expect a journalist-cum-supporter of Occupy like myself to cover the day's action blow-by-blow, tweet-for-tweet, having written with enthusiasm about the calls for a May Day general strike for months now. But May Day is not just a planned day of action; the idea -- although amorphous -- is general strike. It is not a union-led general strike. The meaning of "strike"  is complicated in this economy of financialization, information, service, effective and precarious labor. But on May 1, Occupy organizers and allies have invited us to think about what striking out, generally, might mean to us -- and for me, this means no reporting or live tweeting. I will approach the day as a striker, and not as a story chaser trying to frame a narrative of every lived experience.

The role of writers, reporters, citizen journalists, streamers and tweeters is a tricky one when it comes to striking. Some of my colleagues and online followers have suggested that I would better serve the general strike efforts (which I am wont to do) by covering the action. They suggest that, firstly, for those truly unable to join street actions, I could provide some sense of inclusion through live coverage, and that, secondly, mainstream journalists will do a horrible job of covering events -- and that efforts should be made to counter that.

It is a valid point that those unable to join street activities could feel included through live coverage or tweets; however, my concerns here are far trumped by the fear that those who could otherwise participate "IRL" (in real life) would instead rely on Twitter feeds and liveblogs to feel involved, ignoring perhaps the most important part of the general strike call, "Take the Streets!" I do not want to mediate experiences on May Day -- I will not take part as media.

I have also noticed on all too many Occupy actions that the fixation with coverage can detract from safety and group cohesion on the streets. I have numerous times felt that if 90 percent of the people with smartphones held high actually focused on their immediate environments, marches would improve tactically and participants would enjoy a very different experience.

It's important to note that my striking is not a strike against Salon -- I'm not leveraging withdrawal of labor against one employer; rather, hoping to take part in actions that rupture business and politics-as-usual. As I'm on a freelance contract, it's far easier for me to take the day off than those in more formal work situations. However, as I have written here before, much organizing for May Day has focused around how an underemployed, freelance, precarious and regularly jobless workforce -- as is the economic reality -- might strike. If this is a precarious workers’ strike -- I know which side of the picket line I belong on. And although I come from immense privilege -- with degrees from Cambridge and Columbia -- my working situation is precarious. I live from paycheck to paycheck with no benefits. Facing broken ribs and a serious knee injury this year, my husband could not go to hospital and feels constant pain -- we are uninsured, he's unemployed, we're both angry; this is why we strike.

It is perhaps more obvious why I would strike from reporting (for which I'm paid) than live tweeting, which I do for free. Indeed, a number of my writer friends are not producing content for pay on May 1, but plan to tweet in order to spread the word and galvanize support. And no one can deny the important role social media plays as an organizing tool on big days of action. But it's a dangerous apparatus too -- least of all, since a recent judge's decision upheld the government's ability to subpoena our Twitter records to use against us in court. But also, it's worth remembering that through sites like Twitter and Facebook, we constantly provide free, unpaid content that makes a few corporations unimaginable amounts of money. Furthermore, communicating through Twitter is a constant experiment in market testing our online identities: We literally commodify ourselves 140 characters by 140 characters. I'm keen, on May Day, to step away from such a mode of communication.

I raise a lot of big questions here, none of which I pretend to have the answer to. The May Day general strike is an experiment and one I look forward to taking part in wholeheartedly. I find the distinction between observer and participant a problematic one to uphold. A distinction I prefer, although equally imperfect, is one drawn by philosopher Jean-Paul Sartre in his 1938 novel "Nausea" -- the distinction between "living" and "recounting." The protagonist notes, "a man is always a teller of tales, he sees everything that happens to him through them; and he tries to live his own life as if he were telling a story." Just imagine what Sartre would have made of Twitter and Facebook timelines.

So, by way of existentialist philosophy, I hope I have explained to some extent why striking on May Day means so much to me. In 2009, a series of student strikes and occupations swept the University of California system -- they were important precursors to Occupy. I saw an image from one action in which students took over a highway, carrying a large banner that read "We Have Decided Not to Die." Although cryptic, it resonated as a powerful refusal to succumb to capitalism's quotidian oppressions. The students took a life-affirming action. Like them, on May Day, I'll be choosing to live, and not recount.