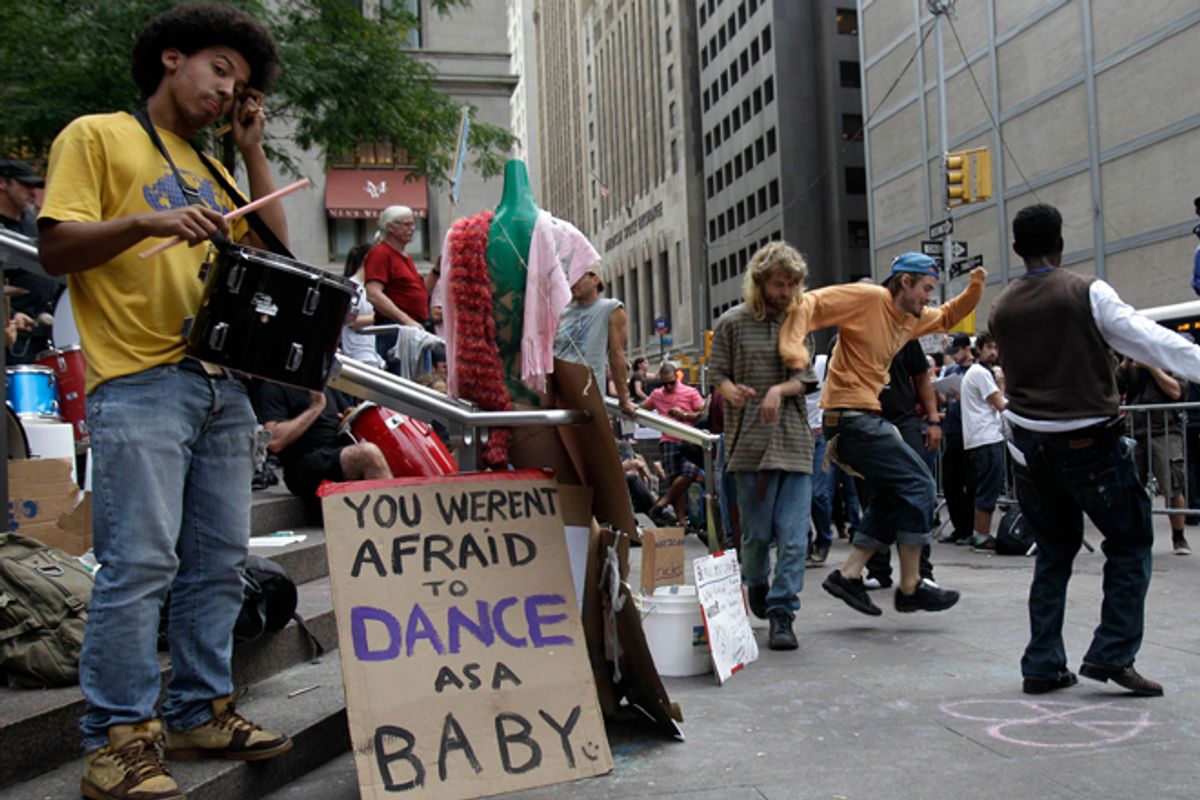 “Do we have to be so sad and depressed and overmedicated?” asked 54-year old Steve Baldwin, strumming his guitar. He was with a group of musicians in Tompkins Square Park (an early planning spot for Occupy Wall Street) on Sunday at a rehearsal of the “Guitarmy.” It’s an “army” of guitarists (he holds the rank of “squad leader”) that will march and play this afternoon for the May 1 New York City demonstrations that aim to reignite the Occupy movement.

Rage Against the Machine’s Tom Morello will lead the troops. But Baldwin also takes inspiration from folk legend Pete Seeger, whom he joined on a spontaneous march in support of Occupy Wall Street last October. Of all the ways to participate in the cause, Baldwin has decided to take a musical route. “It builds solidarity,” he said. “It’s less angry.”

That’s the prevailing philosophy among today’s New York City performers and visual artists — comprising nearly 50 groups and more than 1,000 participants, according to organizers.

"It's not aggressive but it’s still strong," said 24-year-old professional dancer and teacher Ilona Bito. Her project, “Ballet Barre on the Barricades,” has for the past several weeks been using the metal police barricades that now surround many New York City parks as handrails for ballet practice. The first image for Occupy Wall Street, put out by activist magazine Adbusters, shows a ballerina poised atop the iconic bronze Charging Bull statue near Wall Street.

Occupy Wall Street has drifted far from those early whimsical days. With militant chanting, cries of “F--- the pigs,” mass arrests and charges of police brutality, the movement has taken on a warlike air. But art, performance and even comedy have been another part of it since the beginning — something that many participants are trying to bring back.

“The marches are very powerful and motivating for anyone who begins in the march,” said 27-year-old librarian Jeremy Bold. “For passersby, they see people who are very vocal and angry.”

Bold, who goes by the nom de occupy “Jez,” worked to inject art and levity into the movement from the start. He and some friends began on August 22 by gathering at 26 Wall Street in front of the Federal Hall National Memorial building, where George Washington took the oath of office, to read poems, sing songs and even give yoga classes. On September 1, they were playing Frisbee, strumming guitar, reading poems — and planning to sleep out all night — when the NYPD arrested nine of them, thereby propelling Occupy Wall Street into a national news story.

“All these creative groups -- if the cops crack down on that, that’s' going to resonate with the masses pretty big,” said 29-year-old Harrison Shultz, a business analyst who was with the September 1 group but was not arrested. Schultz is now a member of an OWS-affiliated prankster group called Revolutionary Games.

They are among the many groups that have germinated during the long winter of Occupy, with the goal of making the movement more accessible to everyone, in part by making art more accessible. “It’s also for people who don’t identify as artists,” said Max Liboiron, 32, an artist and organizer of the massive Call to Create project that is that is cataloging and assisting those nearly 50 projects. “It’s about breaking down some of the barriers," she said.

“I’ve always felt like anybody can really be creative…and be able to create something that’s entertaining or is at least fun,” said 22-year-old filmmaker Zacqary Adam Green who plans to invite people into a spontaneous video project called “Flashmob Filmmaking” in New York’s Bryant Park.

Green sees himself as “tangentially” connected to Occupy Wall Street by a basic philosophy of “taking something back from corporate America.” For him, it’s not about economic justice alone but also “about taking back even the mindless entertainment that we're having fun with. We're telling Hollywood that we don’t need them to have fun,” he said.

“Personally, I don’t like labels,” said 25-year-old musician Dotan Negrin. “So I don't consider myself part of Occupy Wall Street. I'm not a protester.” Negrin has been travelling the country with a musical project called Pianos Across America. He has driven and dragged his upright piano as far as LA, Seattle and Chicago to play in open spaces and welcome people into the the performances. For the past few months, he’s been playing in Union Square Park, which has become something of a second home for the occupiers.

“I always play Union Square, so I figured I might join them,” said Negrin.

His goal in life, he said, is to “try to do something really extraordinary while trying to make the world a better place.”

“That's my sort of protest,” he added.