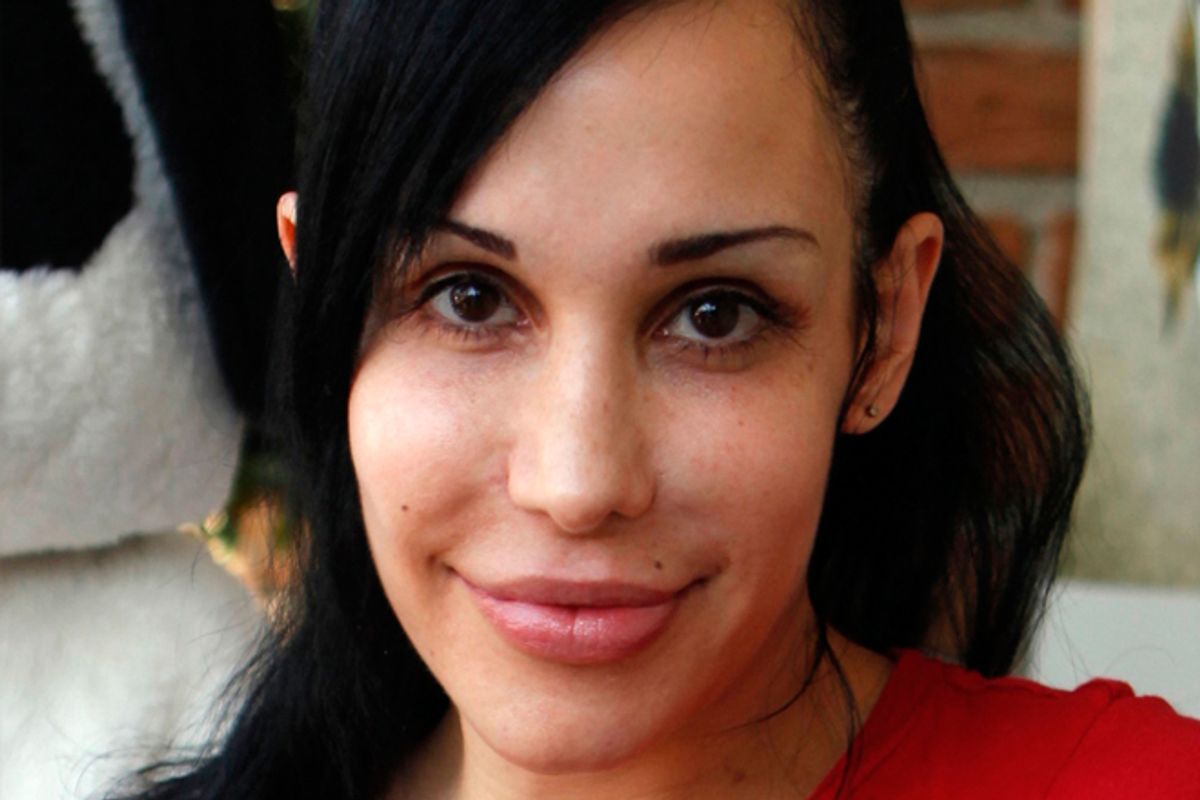 This week Suleman, World's Greatest Bumpaholic and, according to Suze Orman, the woman "everybody hates," managed to yet again redefine "rock bottom." On Monday, she filed for bankruptcy, stating in court that she is up to a million dollars in debt. The Orange County home she lives in with her 14 children is in foreclosure -- and she owes $30,000 in back rent, as well as additional debts to "her father, the city’s water department, DirecTV and Whittier Christian School." She had a visit from child welfare services just a few weeks ago, and despite her vow to not go on public assistance, now admits she takes in $2,000 a month in food stamps.

There isn't much about the story of Suleman -- a woman who says she never got "unconditional acceptance and love" from her own mother -- that isn't sad and disturbing. For three years now, she's eagerly vied for public attention, peddling a reality show,  shilling for PETA and trying to build what she naively refers to as an "empire" around her mega brood.

But Suleman is not a likable personality. She's a woman whose motives seem grossly misguided, who's acted entirely without benefit of a media-acceptable support system. She's the lady who makes Kate Gosselin look sympathetic. And for that reason, her attempts to leverage her unorthodox lifestyle have fallen short. Even a public that can make celebrities out of those enthusiastically breeding Duggars will stop short of endorsing a single woman who seems so blatantly out of her depth, so recklessly willful about her reproductive system, so blithely clueless about the consequences of her choices. What's left for a woman like that? Not quirky TLC reality shows. Not a stint co-hosting "The View." Nope, Suleman now faces roughly the same options as many women who've made rash choices, who's been blind to protecting themselves and their families. The depths of sexual degradation.

Suleman's certainly not mulling a deeper step into adult entertainment because that's her personal inclination. She's clear that she's increasingly desperate and her choices are narrowing every day. At 36, she likely knows that even her option to sell herself sexually is rapidly diminishing.

Poor as her decision-making has been historically – and, based on her recent moves, apparently continues to be – the bottom line is that Suleman is still responsible for 14 children who have no other family but each other. And while her behavior has been horribly ill-thought-out, a culture that would punish a woman for that recklessness by taking pleasure in her humiliation, that would send her the clear and repeated message that her value now is simply as a sex show freak, is just sadistic.

Suleman and her kids don't just need to pay their rent and their bills now. They need resources. They need help. They need sustained, professional emotional and social support. Yeah, she made her own bad decisions and she's got to live with them. And no, I don't get why someone with that much debt didn't cancel her DirecTV account long ago either. But a family of 15 human beings dragged down into bankruptcy and autoerotic porn isn't just Nadya Suleman's problem. There's no satisfaction to be had in her downfall, no "told you so" payoff. Mercy isn't just for people who are good. Compassion isn't for mothers who do the right things. It's for the people who make the biggest mistakes, who screw up the hardest. It's for people like Nadya Suleman.