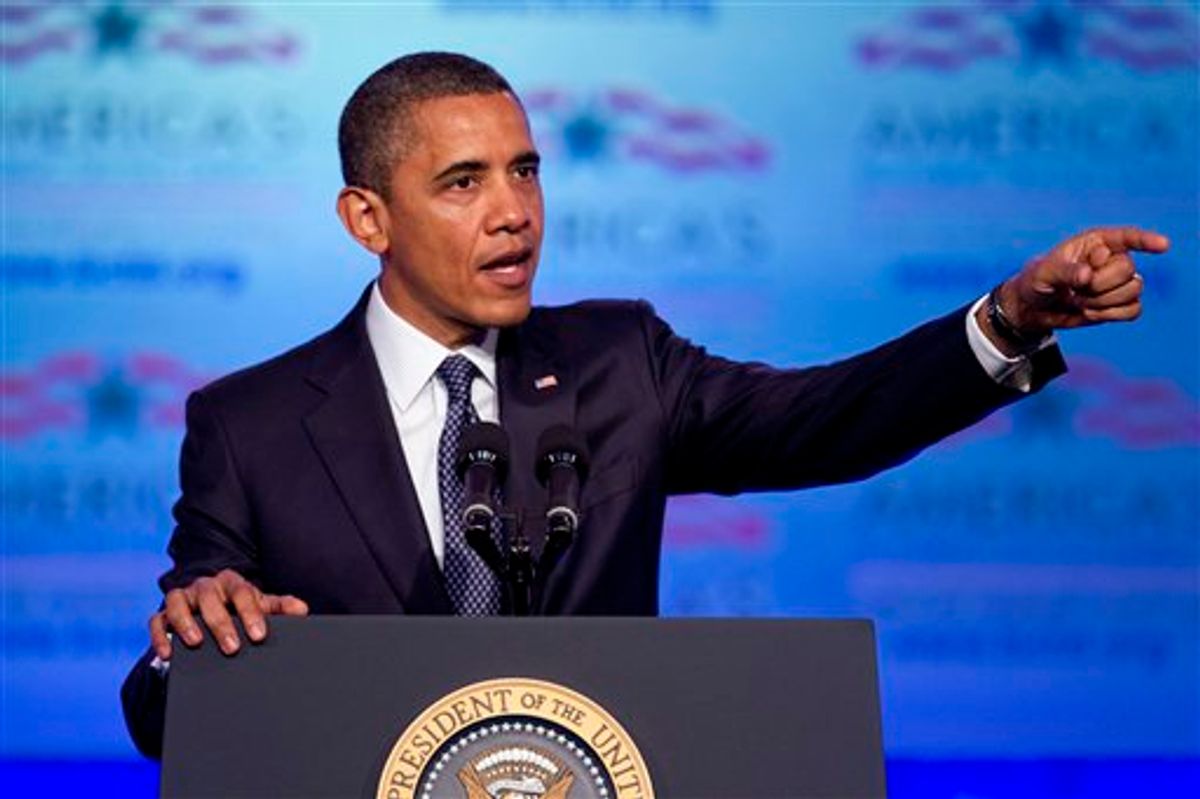 A familiar lament from the left is that the Democratic Party is too willing to let itself get pushed around – that its leaders hit back feebly and ineffectively in the face of Republican attacks, and that they almost never throw the first punch. Hopefully, those who hold this view are paying close attention to the fight Barack Obama just picked.

The president didn’t have to do anything last week to draw attention to the daring mission he authorized that resulted in Osama bin Laden’s death. The one-year anniversary of the raid was approaching, and the milestone-obsessed media would surely be playing it up.

But Obama and his campaign went ahead anyway and released a video last Friday that featured a stirring tribute from Bill Clinton (“He took the harder and the more honorable path”) – and that used Mitt Romney’s own words to suggest bin Laden would still be alive if the presumptive GOP nominee had been in the White House.

Vice President Joe Biden was even more direct in a campaign speech hours before the video was released: “Thanks to President Obama, bin Laden is dead and General Motors is alive. You have to ask yourself: If Governor Romney had been president, could you have used the same slogan in reverse?”

Several days later, the outcry from Republicans – and from many neutral and Obama-friendly commentators -- still hasn’t quieted. Two main objections are being expressed. One is that Obama is “politicizing” what should have been a nonpartisan, nationally unifying anniversary.

“I’ve had the great honor of serving in the company of heroes,” John McCain said on Bill O’Reilly’s show last night, “And you know the thing about heroes? They don’t brag.”

Or as Ed Gillespie, who chaired the Republican National Committee during George W. Bush’s 2004 reelection campaign, put it: “This is one of the reasons President Obama has become one of the most divisive presidents in American history. He took something that was a unifying event for all Americans…and he’s managed to turn it into a divisive partisan political attack.”

When Republicans make it, it’s hard to take the politicization charge too seriously, given the relentless appropriation of 9/11 that defined the Bush-era GOP’s domestic political strategy. At the height of the 2004 campaign, for instance, Vice President Dick Cheney all but declared that the election of John Kerry would bring about another terrorist attack on American soil:

It’s absolutely essential that eight weeks from today, on Nov. 2, we make the right choice, because if we make the wrong choice then the danger is that we'll get hit again and we’ll be hit in a way that will be devastating from the standpoint of the United States.

Measured against this, Obama’s video and Biden’s line are almost tame. After all, the question the Obama team is raising about Romney is basically a fair one. Back in 2007, during his first White House campaign, Romney said of bin Laden, “It’s not worth moving heaven and earth and spending billions of dollars just trying to catch one person.” By contrast, during that same campaign, Obama promised that he’d move against top tier al-Qaeda leaders in Pakistan if he had “actionable intelligence,” even if Pakistan’s government didn’t sign off on the mission. Questioning how a President Romney would have handled bin Laden seems defensible.

That said, the denunciations from less partisan voices, who recognize that Obama chose this fight and are blasting him for making a “sleazy” decision, could be problematic for the president. The more this attitude drives the media’s coverage of the topic, the more likely it is that truly independent swing voters will agree that Obama’s gone too far.

The other Republican complaint seeks to trivialize the operation that killed bin Laden by pretending that it was a no-brainer. As Romney himself put it on Monday, “Even Jimmy Carter would have given that order.” This echoes Karl Rove’s take on the subject two months ago, when he sniffed at the suggestion that voters might reward Obama for the terrorist leader’s death:

As for the killing of Osama bin Laden, Mr. Obama did what virtually any commander in chief would have done in the same situation. Even President Bill Clinton says in the film “that’s the call I would have made.” For this to be portrayed as the epic achievement of the first term tells you how bare the White House cupboards are.

Of course, that’s not really what Clinton said, and if there’s any doubt about the risk Obama took, just try to imagine the unending political torment he’d have been subjected to if anything had gone wrong during the raid. (Or better yet: think back to the very real political torment that Carter was subjected to when the 1980 Iran hostage rescue mission he authorized ended in a fiery desert wreck.)

But now that some time has passed, Republicans, who felt compelled a year ago to let Obama take a bow, are now intent on denying him any meaningful credit for getting bin Laden. And as Rove’s comment from March shows, this was the case even before Obama began “politicizing” the matter last week.

Which is exactly the point. From the moment he took office, Obama’s Republican foes made clear their intent to treat him as the second coming of (their caricature of) Carter – a naïve, overly deferential global lightweight who’s too ashamed of America to stick up for it on the world stage. That Obama’s actual foreign and national security policies defy this caricature is of no consequence to them. Romney himself is among the worst offenders; he continues to claim that Obama “went around the world and apologized for America,” even though the president did no such thing.

This is the sort of attack that many Democrats believe their party has been poor at deflecting. In picking the bin Laden fight, Obama is partly defending himself against the Republicans’ caricaturing. But he’s also trying to turn the tables and put them on the defensive on an issue they think they own. This is what Democrats have for years been agitating for. And now we’ll get to see if it works.