Perhaps it's a bad idea to trust the executive branch to wield the most extreme powers in the dark, with no checks 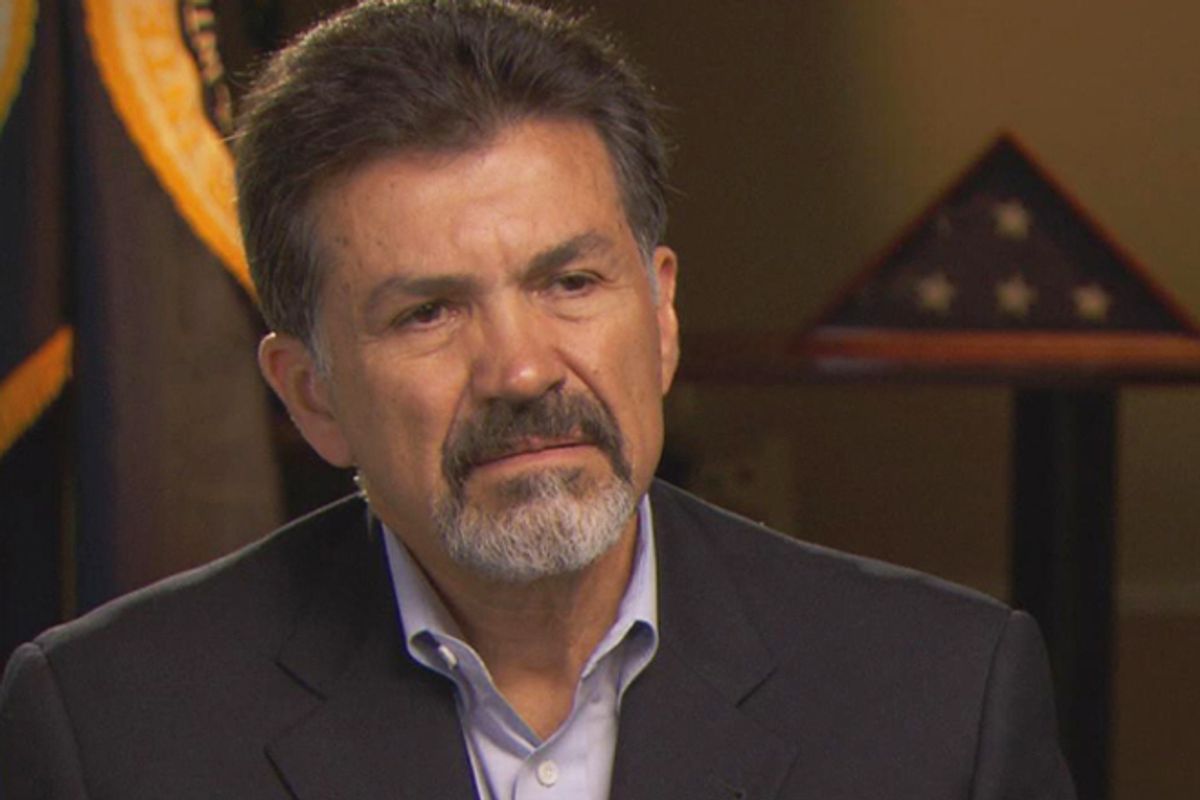 Jose Rodriguez, the high-ranking CIA official who ordered the destruction of 92 videos showing the agency's interrogation of Terrorist suspects, was interviewed on Sunday night about his new pro-torture book by 60 Minutes (that show's network, CBS, and the publisher of Rodriguez's new book, Simon & Schuster, are both owned by the CBS Corp., now synergistically profiting off of torture advocacy). There is an important lesson to be learned from this interview.

As many commenters correctly noted, the torture-defending Rodriguez is clearly a crazed sociopath (of the distinctly banal type identified by Hannah Arendt). At Esquire, Charles Pierce has a perfect post about all of this, writing: "I'm pretty convinced that Rodriguez is both a sociopath and a maniac" (his first paragraph, on the Obama administration's serial protection of these war criminals, is a must-read). The New Yorker's Amy Davidson notes that Rodriguez did not even bother to defend torture as a necessary evil but rather "bragged about its use in proving the manhood of the torturer" (indeed, Rodriguez' claim that authorizing torturing meant people in government were willing to "put their big boy pants on" exposed a whole new level of psychosexual creepiness). Andrew Sullivan says Rodriguez is "a war criminal" who "has no shame about any of this, and intends to make money off it."

All of that is true, but the key point here is that Rodriguez -- with all of his sociopathic, maniacal, proud war criminality -- wasn't some low-level rogue officer unrepresentative of the CIA. The opposite is true: he spent his career at that agency and advanced continuously, rising to lead what The Washington Post's Dana Priest this week called "the Central Intelligence Agency’s all-powerful operations directorate," located "at the center of the universe at the agency." He was essentially in charge of clandestine operations, including the CIA's torture, rendition, black site and detention programs. And the criminal programs he is "sociopathically" defending were ones that were embraced by the highest levels of the U.S. Government, authorized by its Department of Justice, and protected from investigation and prosecution by the current administration. Rodriguez -- sociopathy and all - isn't some aberration in the U.S. Government's intelligence and paramilitary world: he's its symbol.

As so many people react with revulsion to the mindset of Jose Rodriguez, perhaps this is a good time to stop and realize why it's so dangerous and wrong to trust the Executive Branch to exert the most extreme powers -- of assassination, indefinite detention, rendition, surveillance -- in the dark, with no oversight, constraints or transparency. Those of you who are content to have the Executive Branch decide -- without checks or transparency -- who lives and dies, who is free and imprisoned, who is entitled to due process and who isn't, are putting your blind faith in the Jose Rodriguezes of the world.

Even people who don't originally assume that level of unchecked power in a corrupted and sociopathic state can (and will) easily be transformed by it. That's the inherently corrupting nature of unchecked power -- of human nature -- that led the American founders to insist on multiple levels of burdensome checks whenever power of this sort is exercised. Jose Rodriguez -- his actions and mentality -- is the inevitable fruit of placing faith and trust in the Goodness of American Executive Branch officials to exercise the world's most awesome powers without any meaningful scrutiny and limits.

Yesterday, President Obama's chief counter-terrorism adviser, John Brennan, gave a speech in which he purported to provide more "transparency" with regard to the Obama drone program. But he did nothing of the sort. Instead -- while justifying everything the Government does with the standard mantra: "We are at war . . . Yes, war is hell.  It is awful.  It involves human beings killing other human beings, sometimes innocent civilians" -- he offered a series of empty platitudes ensuring us all that "President Obama has demanded that we hold ourselves to the highest possible standards and processes" when it comes to the drone program. Whenever someone in the Executive Branch proposes a candidate for summary death, he said, officials "consider all the information available to us, carefully, responsibly"; "these efforts are overseen with extraordinary care and thoughtfulness"; and they "only authorize a strike if we have a high degree of confidence that innocent civilians will not be injured or killed, except in the rarest of circumstances."

But these are all just vague, unverified assertions (the novelist Herman Hesse, in 1917, perfectly described the meaningless vapidity of Brennan's assurances). The actual evidence which would reveal what the administration is actually doing, what the results of these drone attacks actually are, continue to be concealed (based on the administration's long-standing insistence to courts that it cannot safely even confirm or deny the existence of the drone program, even though Brennan did exactly that yesterday: "the United States Government conducts targeted strikes against specific al-Qa’ida terrorists, sometimes using remotely piloted aircraft, often referred to publicly as drones").

In lieu of evidence and oversight, we are asked, instead, to simply place our faith in John Brennan and his claims, judgment and magnanimity. Brennan himself -- like Rodriguez -- was a Bush-era CIA agent who expressly advocated "enhanced interrogation techniques" (short of waterboarding) and rendition. He also has a history of demonstrated lying about the civilian deaths from U.S. drones and spouting blatant, narrative-shaping falsehoods about the killing of Osama bin Laden. What possible justification exists for placing our blind faith in his unverifiable pronouncements, or more so, vesting him with the unchecked and secret power of life and death, imprisonment and freedom?

Indeed, there is no justification for placing any of those powers in the hands of any political leaders without a litany of checks, transparency and constraints. Anyone who toys with the notion that this can be safely done should spend some time watching the interview with Jose Rodriguez, who acquired power not by deviating from the Executive Branch's mindset but rather by exemplifying it.

As I noted last week -- and as Pierce elaborated on -- the real scandal from the Jose Rodriguez book tour is that the Obama DOJ has protected him and his fellow criminals from all forms of accountability. Yesterday, Democratic Sen. Diane Feinstein issued a statement about his 60 Minutes interview matter-of-factly stating that his order to destroy videotapes "illustrates a blatant disregard for the law." Yes, obviously it does: and that's what makes the DOJ's refusal to prosecute him so corrupt. Of course, Executive Branch officials, even when it comes to most egregious crimes, are beyond the rule of law when it comes to actions they take as part of U.S. Government policy.

Andrew Sullivan -- who once called for Obama to be prosecuted as a war criminal for his complicity in Bush war crimes -- today rhapsodizes that Obama "restored this country's moral credibility after the dark period of Nazi-style interrogation under Cheney, Bush and Rumsfeld." Among whom exactly did he do that?

UPDATE: I was interviewed yesterday by Sam Seder for his Majority Report program about Rodriguez's interview and non-prosecution; the 15-minute discussion can be heard here.