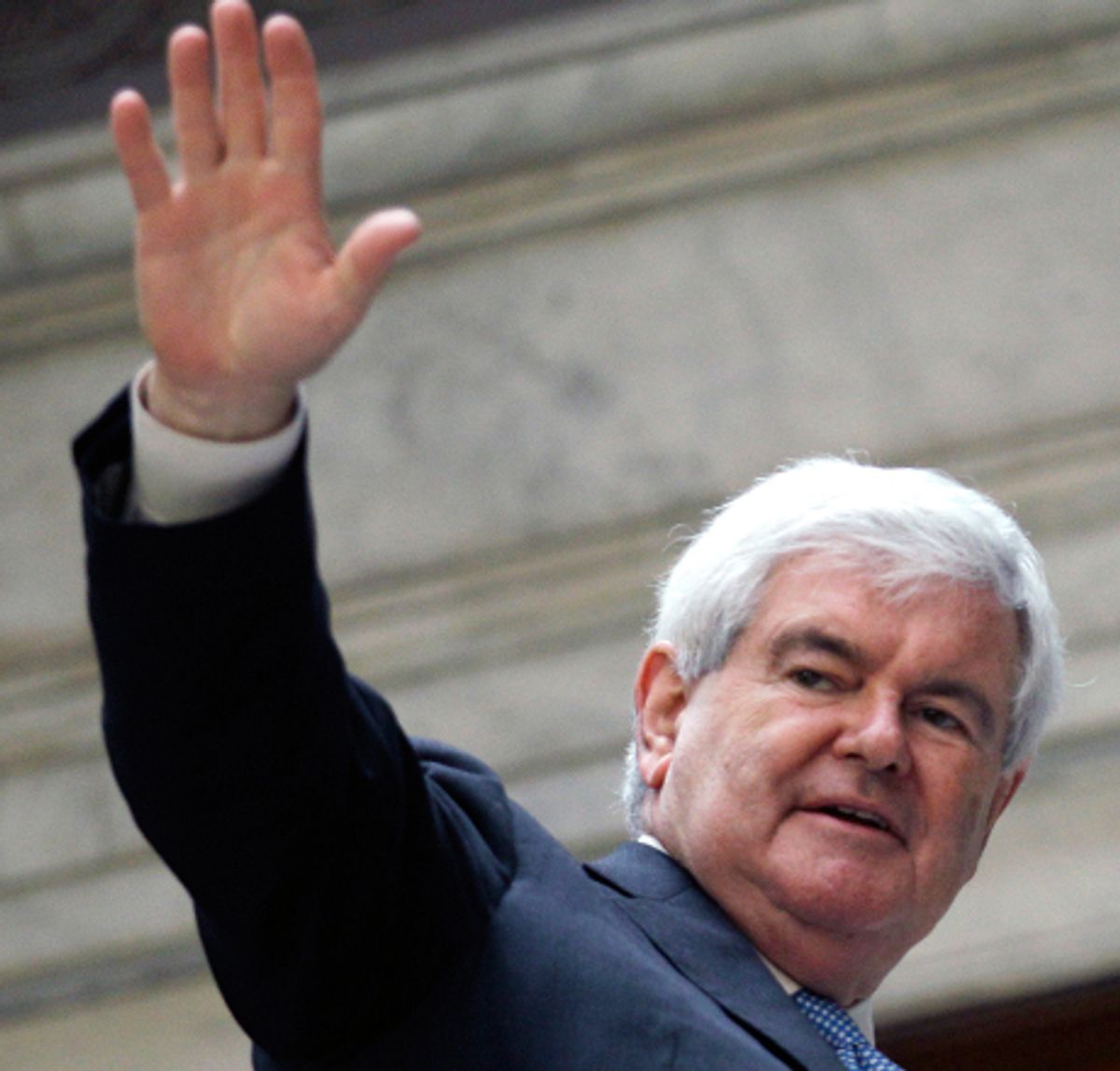 Today is another fine day for Newt Gingrich, although not his best. After months of neglect, he'll get the political media to pay attention to him for a final 10 or so minutes. "All of us have an obligation, I think," he said in Tuesday's video announcing his announcement of his resignation today, which he first announced last week, "to do everything we can to defeat Barack Obama." For Gingrich, this typically would mean attacking Mitt Romney. But Newt seems serious about dropping out this time, as shameful as that is for the erstwhile "definer of civilization," as he called himself in some early-1990s doodles.

Tragic! For now we know that Gingrich won't even reach that steppingstone, the presidency of the United States, to his predetermined world-historical greatness. And yet he came so close: He was briefly viable at three separate points in this race, before, predictably, tossing it all away -- or having Mitt Romney's super PAC attack snatch it away from him. Let's recall these three Rises and Falls of Would-Be President Gingrich and share in our despair that the funniest possible presidential nominee, Newt Gingrich in 2012, was not selected in a national primary of his peers.

Rise: For whatever reason (name recognition, actually; that was the reason), many considered Newt a "top-tier candidate" when he first entered the race. "He is in the top tier of prospective candidates but ranks below some of the other contenders," CNN.com wrote in May 2011, when a CNN.com poll showed him trailing aforementioned "other contenders" Sarah Palin, Mitt Romney, Donald Trump and Mike Huckabee. (For more on how all presidential punditry in 2011 was crap, see this.) That same week, Gingrich decided not to participate in the season's first debate in South Carolina, joining a "batch" of fellow "top-tier Republican prospects -- including Mitt Romney, Sarah Palin… Mitch Daniels and Mike Huckabee," as Politico wrote, who also fancied themselves too prominent to face such lesser candidates as Rick Santorum. Gingrich, a bold-faced name who'd long toyed with a presidential candidacy, had convinced much of the media, without lifting a finger, that he was a Contender.

Fall: Here's the sort of reception Gingrich would get from his fellow foot soldiers in the Gingrich Revolution after calling Paul Ryan's Medicare-busting budget "right-wing social engineering" on "Meet the Press," shortly after entering the race: ""Why don't you get out before you make a bigger fool of yourself."

That didn't help build support from a Republican Party that had just bet its marbles on the purity and truth of all things Paul Ryan. Shortly thereafter, he and Callista went on a cruise through the Greek Islands -- not the greatest sign for doubters who thought he lacked the discipline to carry through a presidential campaign. His six-figure debts to jeweler Tiffany & Co., a stupid, private bit of opposition research that didn't have any relation to soaring federal deficits, still did not sit well with a party fixated on restoring fiscal responsibility. And then, the June Mutiny, when most of his top aides quit en masse -- including spokesman (and later top Gingrich super PAC official) Rick Tyler, who a few weeks earlier had testified to Gingrich's resilience with this glorious, tongue-in-cheek statement to the press:

The literati sent out their minions to do their bidding. Washington cannot tolerate threats from outsiders who might disrupt their comfortable world. The firefight started when the cowardly sensed weakness. They fired timidly at first, then the sheep not wanting to be dropped from the establishment's cocktail party invite list unloaded their entire clip, firing without taking aim their distortions and falsehoods. Now they are left exposed by their bylines and handles. But surely they had killed him off. This is the way it always worked. A lesser person could not have survived the first few minutes of the onslaught. But out of the billowing smoke and dust of tweets and trivia emerged Gingrich, once again ready to lead those who won't be intimated by the political elite and are ready to take on the challenges America faces.

And so Gingrich would reemerge at the top, six months later, for a couple of weeks or so.

Rise: Well, all those Herman Cain supporters who wanted a new unhinged screw-up with tons of baggage only had one place to go once Herman Cain left, right? Bachmann was nothing, Perry was nothing, Santorum (at that point) was nothing, and so the party base turned to its former commander, Newt Gingrich, to once more be the grenade that destroyed another Democratic administration's chance at effective center-left governance. He'd crush Obama in the debates, after all! By mid-December 2011, Gingrich had hit 40 percent in national polls, opening double-digit leads against Mitt Romney both nationwide and in key early states. "I’m going to be the nominee," he famously predicted that December. "It’s very hard not to look at the recent polls and think that the odds are very high I’m going to be the nominee.”

Fall: By Dec. 19, Newt Gingrich had fallen to the mid-teens in Iowa polls. He finished fourth in the state's kickoff caucuses and fifth in the following week's New Hampshire primary. When he had had the lead, see, he had pledged to run on positivity ads only -- a promise candidates make when their campaigns have no money. Mitt Romney's super PAC, Restore Our Future, did have money, though, and proceeded to remind voters of all the terrible things Newt Gingrich did, both personally and publicly, in the 1990s. It worked, and Gingrich was pissed.

Rise: When Gingrich went to South Carolina, his goal was mostly just to pulverize Mitt Romney out of electability, to show the masses, the cretins, what a horrible choice they were making -- a "Massachusetts Moderate" instead of a "Bold Reagan Conservative," as he defined the choice in typically comical fashion. Winning Our Future, the super PAC largely funded by casino billionaire Sheldon Adelson, helped him in this regard, by giving him the attack ad money he needed to keep the campaign alive. Romney, to conservatives' horror, was trashed as a "vulture capitalist" whose record in private equity at Bain Capital saw him buying and "looting" companies that frequently went out of business, while Romney collected fees regardless of the outcome.

But what really worked for Newt was yelling at a couple of debate moderators. No, really, that was it. He first returned fire at black Fox News correspondent Juan Williams, who had asked him whether he thought it could possibly be offensive to label the first black president a "food stamp president" or to suggest that poor, urban youths would need to become janitors at their schools to learn the value of Hard Work. "Only the elites despise earning money," Gingrich said, to roaring applause from white males. Then, a few days later, he took on highly targetable, wishy-washy CNN anchor John King, who opened a debate by asking him to address his (second) ex-wife's tell-all appearance on ABC News that same day. Gingrich was ready with his dismissal of both this question and the mainstream media in general:

Every person in here knows personal pain. Every person in here has had someone close to them go through painful things. To take an ex-wife and make it two days before the primary, a significant question in a presidential campaign, is as close to despicable as anything I can imagine.

My two daughters wrote the head of ABC and made the point that it was wrong, that they should pull it, and I am, frankly, astounded that CNN would take trash like that and use it to open a presidential debate.

He would defeat Mitt Romney in the South Carolina primary by double digits. The party, disrespectfully, forced Gingrich to continue campaigning in the 40+ remaining states' contests, instead of simply crowning him president then and there.

Fall: Oh, you know this -- Romney's campaign and super PAC spent nearly quadruple the amount of money on ads in Florida that Gingrich and Co. did. Money: It works! As for the debates, which Gingrich had begun touting as the No. 1 reason to select him to face President Obama one-on-one -- well, Mitt Romney, in a vintage Mitt Romney move, hired a new debate coach to teach him not to lose miserably to Newt goddamn Gingrich, and it worked. Gingrich couldn't even flatten CNN moderator Wolf Blitzer, who essentially wears a sign saying "FLATTEN ME" at all times, when he tried. Romney won the state, and from there on out his chief not-really-challenging rival became Rick Santorum. Gingrich was done.

A shame, really. Not that Gingrich left much of an impact at all on the election, or could have guided America to better days if he'd become president. He was just funny to watch, is all. And some of his choicest attack lines on rival Mitt Romney will live on through November, thanks to the Obama campaign's ad team.

Will Newt Gingrich run again? It's hard to say no definitively, since he is insane. Most likely he'll do the pre-2012 Newt Gingrich presidency routine, where he pretends that he may run for a little while, just long enough to build up enough PAC donations that can then be converted into a comfortable salary for himself for another few years. We'll see. If he does run again, though, don't expect him to do things any differently. He is incapable of change. We salute him.