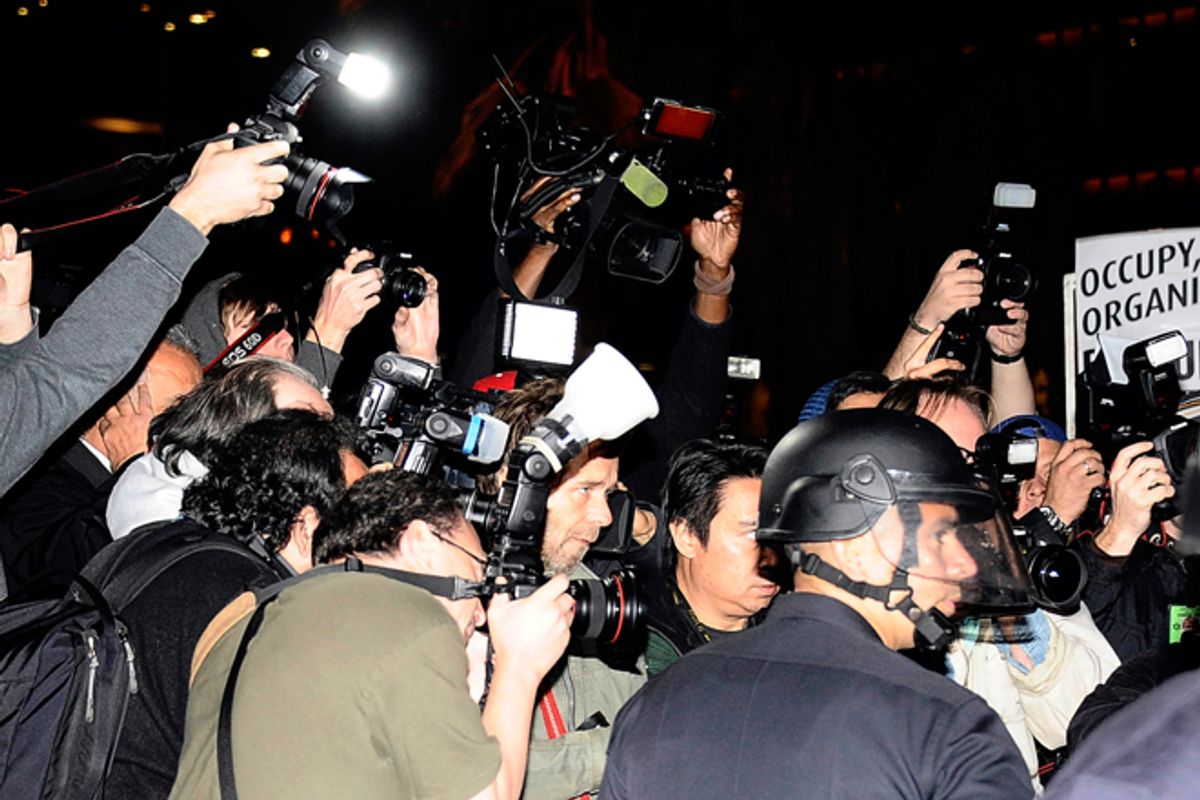 Photographers at the Occupy LA encampment in November, 2011. (Reuters/Gene Blevins)
--

Thousands of people marched in cities across the United States yesterday in observance of May Day. But if you were watching the mainstream media, it would have hardly been a blip in their coverage. Without mass arrests or an ongoing occupation, mainstream media has been unable to craft a narrative or find the movement sensational enough to report on.

Instead of bemoaning the lack of coverage of OWS, however, activists have begun to cultivate a media strategy that aims to supplement, and, in some cases, circumvent, the need for mainstream media. The revolution will be televised; the revolutionaries will be broadcasting it themselves.

During the months leading up to yesterday’s May Day protests, the Occupy movement developed an independent media infrastructure that both mirrors and acts as an alternative to mainstream media outlets. From newspapers, pamphlets and magazines, to radio and television coverage, Occupy-related media was able to cover yesterday’s protests in a more sophisticated and comprehensive way than it ever had before.

Media for the 99%, a project of the Media Consortium, compiled the work of over 25 independent media outlets and provided streaming broadcasts, an interactive map and breaking news reporting. By aggregating work from a myriad of outlets, independent journalists are trying to create a reliable, comprehensive media source.

The Manhattan Neighborhood Network, Manhattan’s Public Access Television Station, devoted 15 hours of coverage to the protests, broadcasting to its over 620,000 viewers. Karanja Gacuca, an independent filmmaker who used to work on Wall Street, helped organize the coverage, “People were astonished we were able to take over the television for so long, but in reality, we just asked if we could.” MNN’s broadcast constituted the only nonstop television coverage of May Day. “I would call it a success. We were able to broadcast HD live streams from the ground. I think we were the trustworthy outlet yesterday. The mainstream media covers the angles that they cover, the sensational – there was much about arrests. But it was really a day of celebration. A day of coming together.”

And Levitin has launched an offshoot of the Occupied Wall Street Journal, Occupy.com,  which looks to be the central media platform for the movement. “We have a long way to go with the website, but we want it to be a legitimate expression of the movement,” he says.

They still have a lot of work ahead of them.  “I worry that the people who read Occupy media are already part of the movement. I worry that we’re just talking to ourselves,” said Joseph Sutton, who edits the site Occupied Stories, which offers “First-person news from the Occupy movement.” Sutton, who spent the day at the protests in New York City, was receiving stories from contributors from all over the country, and posting them on the Occupied Stories website.

Not everyone was satisfied with Tuesday’s result. “Yesterday was the day to do some good coverage, but we just didn’t have the outlets we needed,” Sam Lewis, a 24-year-old independent journalist told me over the phone this morning.

Still, the stitching together of independent journalists, citizen journalists, livestreamers and tweeters into a cohesive and popular platform seems to be a priority for occupiers over the next few months, as Occupy looks to remain in the headlines (even if they might be their own). “I saw a great sign that I believe sums up what we’re doing,” Lewis told me. “It said: Don’t criticize the media, organize journalists.”