As a host of male-centered "pinning" sites arrive, can the female-centric phenomenon continue its success? 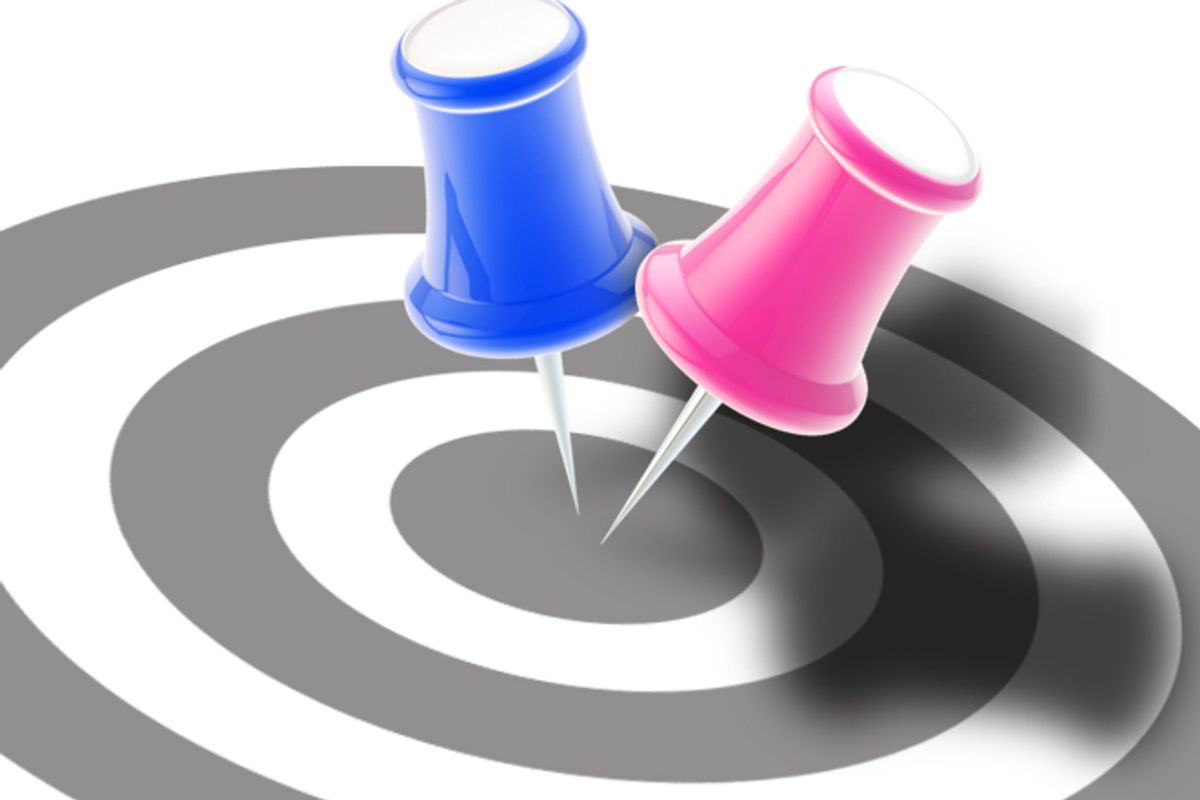 It's one of the biggest online success stories of the decade, attracting a staggering 10 million monthly uniques faster than any site in history. But what makes the rise of the image-sharing Pinterest surprising isn't its stampeding growth, or its sudden ubiquity on your friends' Facebook walls. It's the fact that it's a raging success story with an unmistakably female bent.

Even a cursory glance at Pinterest makes it easy to see why so many of its critics have been dismissive about it – specifically about its girlishness. In Salon earlier this year, Jude Stewart called the site "basically online scrapbooking." Slate's Farhad Manjoo summed it up in a feature called "Cupcakes, Boots, and Shirtless Jake Gyllenhaal," wherein he admitted, "I just don't get it." And when I first looked at Pinterest, my initial impression was "social networking for cat ladies."

Just last week, Buzzfeed came up with a much-forwarded list of "125 Reasons Why Guys Are Scared of Pinterest" -- almost all of which involve scary declarations of man-averse female feelings, a testament to the ways in which Pinterest has not only become emblematic of the gender divide, but a repository for knee-jerk sexism. No wonder then that a host of new Pinterest-inspired, decidedly dudely sites like Dart It Up and Manteresting are springing up in reaction to Pinterest's Girls Gone Gluegunning vibe. The results have been mixed, though -- even with self-aware senses of humor and more cars, bikini girls and red meat than an entire Axe campaign, you can't just butch up a "pinning" format that is inherently about as studly as a subscription to Real Simple.

This intensifying social media gender gap reveals a great deal both about how social media works and how conservative ideas about gender find themselves reproduced online. Facebook, Twitter, Flickr, Instagram, YouTube and MySpace (aw, remember MySpace?) all managed to evolve by hinging their successes on their anybody-can-join-the-party appeals. Sure, they've always attracted a variety of gender-specific subcultures, from soccer moms to frat dudes. But those communities grew up as their own neighborhoods within the larger entity, rather than the destinations themselves. The results have been a pretty equitable gender split among users -- evidenced by the fact, for example, that women account for roughly 57 percent of Facebook and 59 percent of Twitter users. In contrast, Pinterest's U.S. demographics shake out very differently -- hovering between an impressive 68.2 percent and an overwhelming 83 percent female audience.

What is it about Pinterest that makes it so lady-friendly? Is it the way its curvy font seems so much more feminine than Facebook's manly block? Is it that the words "pin board" themselves just sound kind of femme? Perhaps, although I'd wager five years ago you wouldn't have thought there was anything too macho about the word "Twitter" either. Could it be that women just naturally prefer sorting stuff into tidy categories?

It's likely all that and more, a brand identity that the company has both coyly cultivated and gently refuted. In its mission statement, Pinterest says its raison d'être is "to connect everyone in the world through the 'things' they find interesting." But when you're enticing "people all over the world" to "Redecorate your home!," "Plan a wedding!," "Find your style!" and "Save your recipes!," you might as well announce, "Guys, it's like when she takes you towel shopping at Bed Bath and Beyond."

Other sites encourage you to root around a bit first, to tailor it to your own vision. When you first sign up for Instagram or Tumblr, for instance, they're as aggressively plain as Google's home page, circa 1999. Pinterest, meanwhile, deluges you with its cavalcade of ever-changing, disarmingly pretty content. That immediacy makes for a sensible gambit for a site based on visuals. But depending on your inclination, a bombardment of wedding gowns, fancily frosted desserts, maxims about what it means to be "a lady," and multiple repinnings of the same litter of puppies represents either an instantly addictive rabbit hole of inspiration -- or the kind of thing that makes a person want to run out for a cleansing Michael Bay marathon.

Pinterest's sunny, sincere, straight out of a yogurt commercial personality has been a rousing hit so far, a style that's clicked instantly with legions of devoted "pinners." Though its growth has slowed down in the past few months, it still pulled in 20 million unique visitors in March alone. But the challenge the company faces moving forward is whether it can maintain its formidable presence with an identity that's so heavily chick-centric. As professor of linguistics at Georgetown and author of "You Just Don't Understand: Women and Men in Conversation" Deborah Tannen says, "I remember years ago people saying, 'Online communication is going to be gender neutral. This is great!' But the same patterns show up everywhere." And, she explains the cold reality is that "Anything associated with women is thought to have less value." In other words, even with all the uniques in the world, would anybody ever pay a billion bucks for something so feminine?

The question now for Pinterest is whether it will hang on to its ladylike charm,  thoroughly dominating in that domain but risking becoming a pink ghetto -- or broaden its scope and potentially crowd out the folks who come to seek advice on how to do a smoky eye right there on the landing page. Stacy Horn, who created the pioneering online community Echo back in 1990, notes, "People like to gather in all sorts of ways around an idea, an interest, a TV show, a band, or a gender. It’s only a problem, I suppose, if places like Pinterest would prefer not to be so girly, or if they’re trying to attract [different kinds of] advertising dollars." And she points out that "When you’re talking about places the size of Pinterest, even if it is mostly women, how insular can it get? 'Women' is a large, diverse group. I’m a woman, Michele Bachmann is a woman."

Unsurprisingly, Pinterest itself wants to have it all. A company spokesperson told Salon Monday that although "People who initially discovered Pinterest were largely women who were pinning for hobbies or activities … The act of collecting is a universal behavior." She adds, "We believe our demographics will shift over time as more people discover the many different ways in which Pinterest can be used … to evolve to a broader and more demographically diverse audience." Pinterest's U.K. audience is already more gender balanced, perhaps because while Americans use it primarily for "crafts" and "gifts," British users view it for inspiration on "venture capital" and "blogging resources and services." Eventually, American Pinterest may go down a similar path, once it figures out how to attract men to get past its current, scented candle store ambiance.

Gentlemint co-founder Brian McKinney says that despite the evocative name of the mustachioed, manlier "visual social bookmarking site," "If, at the end of the day we're just copying some other site, what's the point? We never set out to be the 'manly' Pinterest; we just wanted to have a site centered around sharing the type of content that was interesting to us – and it happened to appeal to a lot of people." What Pinterest and Gentlemint have in common isn't so much about gender-specific orientation, he says, but the understanding that "the future of the Web is less about having these mammoth sites that are focused on everything under the sun and more about niche sites with really supportive, passionate users." And, he says, the fact that "it's supposed to be fun and very tongue-in-cheek."

Whatever Pinterest's future shape, there's no denying female-oriented businesses can rock the world. The Martha and Oprah empires were not built on manpower, after all. But we live in a culture in which the triumph of anything that skews toward women is still considered revolutionary. Look at how "Bridesmaids" and "Girls," entertainments whose femininity is conveyed right there in their names, became instant flash points -- their success viewed simultaneously as flat-out flukes or compelling evidence of the awesome, heretofore untapped power of the female audience. That's what likewise makes Pinterest's current position unique -- and no doubt precarious. Within a seemingly tame array of cute animals and wedding ideas, nearly 20 years into Web culture, we have nevertheless somehow managed to create something formidable -- at long last, the Net's first true woman-centric blockbuster.