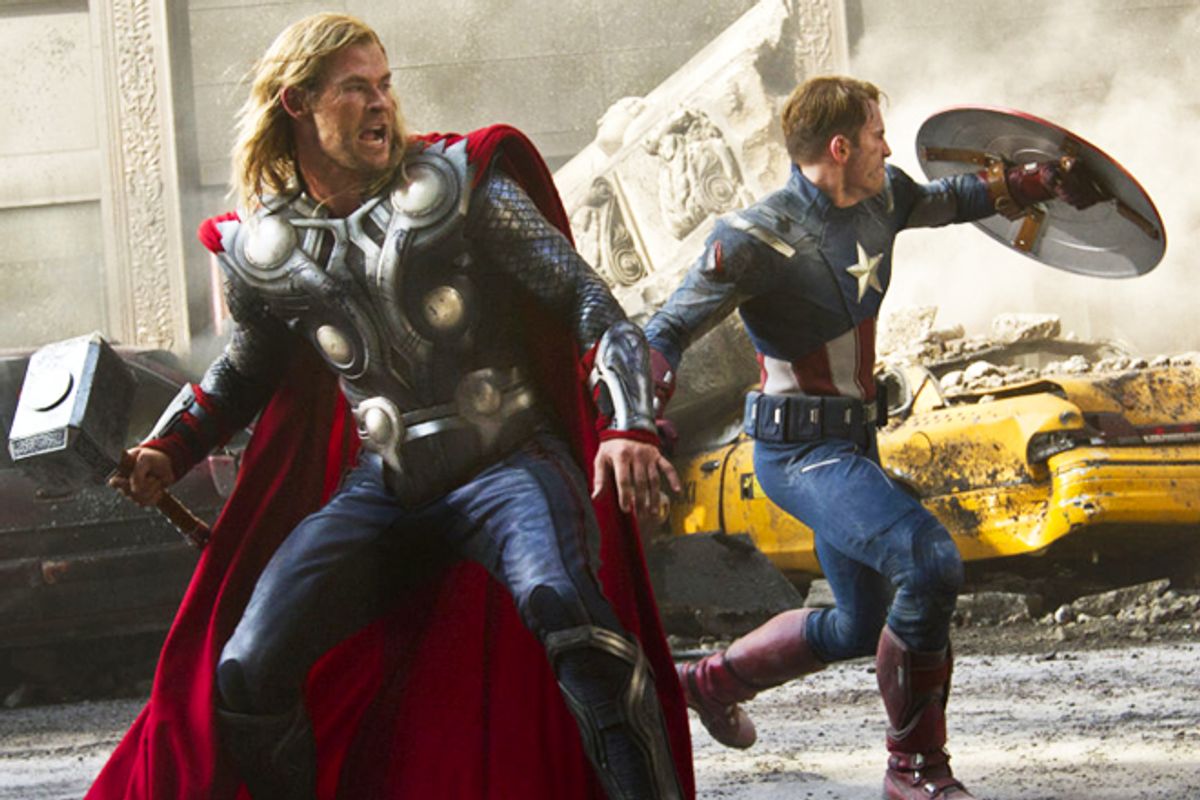 Chris Hemsworth and Chris Evans in "The Avengers"
--

If you're new around here, this is how the script goes: I damn "The Avengers" with faint praise, observing that the (supposed) culmination of the long, laborious Marvel Comics movie franchise is a competent but pointless popcorn entertainment that's being wildly overpraised simply for existing without being incoherent and terrible. Some readers sniff from behind their digital copies of the Atlantic: Why did you even bother? Others lament that, once again, a non-fan of comic-book movies was sent to review something whose true significance, as with a sacred scroll written in Tocharian B, is yielded only to a coterie of gnostics and believers. (An enormous coterie, in this case.) Someone will invoke the ghost of Pauline Kael to instruct us that movies are meant to entertain, and someone else will suggest that the editors send me back to covering films about lesbian sheepherders made in Azerbaijan.

Well, there just isn't enough output from Azeri lesbian cinema to keep me busy, so here we all are again. Cutting to the chase: "The Avengers" does what it needs to do, absolutely. In my conversation with writer and director Joss Whedon a couple of weeks ago, he promised Marvel fans that this movie would "deliver unto them," and that it does, with two and a half hours of increasingly frenetic action and a swarm of characters who crack wise in Whedon fashion but feel strongly connected to the mish-mash Marvel mythology. If you're not much of a Marvel Comics person but just want to get an early start on your mindless summer moviegoing, well, I guess this picture is no stupider than anything else. (As you can see, I possess a certain knack for writing irresistible blurb copy.)

If you belong to the significant quadrant of the population that feels a powerful, tidal impulse to belong to this pop-culture moment, and hence yearn to believe that "The Avengers" is terrific, explosive, awesome fun (or other language of your choosing), please don't let me harsh your vibe. I mean that seriously; what kind of person would I be if I begrudged others a good time at the movies? But it's my job -- and, I guess, my inclination -- to stand outside those tidal currents and view these big spectacles dispassionately, as far as I can. What I see in "The Avengers," unfortunately, is a diminished film despite its huge scale, and kind of a bore. It's a diminishment of Whedon's talents, as he squeezes himself into an ill-fitting narrative straitjacket, and it's a diminished form that has become formula, that depends entirely on minor technical innovations and leaves virtually no room for drama or tragedy or anything else that might make the story actually interesting. To praise the movie lavishly, as so many people have done and will continue to do, basically requires making endless allowances. It's really good (for being a comic-book movie). It's really good (for being almost exactly like dozens of other things). It's really good (for being utterly inconsequential).

I saw "The Avengers" less than a week ago, and already much of it's a blur; if it weren't so easy to find plot synopses widely available, I'd probably forget key details. In another month, all that will stick with me is a few striking scenes and images: Tom Hiddleston, as the sneering Norse god Loki, compelling a crowd of Stuttgart civilians to kneel before him, until one older man, no doubt remembering the last time the Germans did that, rises to confront him. Or Robert Downey Jr., as playboy zillionaire Tony Stark cum Iron Man, delivering oh-snap comebacks one after another to Chris Evans' ultra-square Captain America. (Have Downey and John Malkovich ever been in a movie together, doing their dueling "I'm so gay but I'm actually straight" routines? I think not.) Or Scarlett Johansson in a catsuit, as superspy Natasha Romanoff, cocking her head just so as if to acknowledge that she's the idealized fetish object of the 11-year-old boy within every so-called adult male.

Is there any point in discussing the plot of "The Avengers," anyway? If you've read this far, the odds are strong that you either A) already know the whole story, B) don't want me to issue clueless spoilers or C) simply don't care. For those who may choose "none of the above," I can explain that one-eyed, super-secret government honcho Nick Fury (Samuel L. Jackson) has to reassemble the superhero team known as the Avengers after Loki -- last seen in Kenneth Branagh's "Thor," getting evicted from Asgard, home of the Norse gods -- comes to Earth in search of a mystical energy source called the Tesseract, with a force of insect-like space aliens following him. So Iron Man, Captain America, Natasha, Thor the Thunder God (Chris Hemsworth) and Dr. Bruce Banner aka the Incredible Hulk (Mark Ruffalo, in a nicely understated, embittered performance) all gather on a flying aircraft-carrier/command-center thingy, along with the imprisoned Loki, who plans to sow discord and dissension before his super-disappointing aliens -- rejected by Michael Bay for insufficient gnarlitude, I think -- show up to wreck the place.

Got all that? You don't, believe me. There's also quite a bit of eye candy in "The Avengers," not all of it Johansson-related, and a few glimmers of genuine narrative weight, as in that moment with Loki and the Germans. But in trying to cram in enough plot and back story and increasingly incoherent action sequences for at least three summer movies, Whedon never finds a confident or relaxed narrative pace, and the results are exhausting, a picture that pushes three hours and feels like five. Obviously Whedon is one of the most experienced storytellers of our time, and I have to assume this is a deliberate attempt to satisfy the core young-dude demographic with an experience that will be physically draining, like an extended amusement-park ride. I felt tired at the end of "Avengers," for sure, but even more bored and irritated, probably because the pretense of mythic grandeur can't stand up to the fundamental teenage-boy, men-in-tights silliness of the whole enterprise.

I know, I know. I'm profaning sacred ground here. Once upon a time, and a very long time ago it was, the teenage boys (and occasional girls) who grew into adults and kept on reading superhero comics were viewed as oddballs or outcasts. When Hollywood began to rediscover the pioneering DC and Marvel superheroes of the 20th century, it was refreshing and delightful at first, and for a while: the Christopher Reeve Superman movies, Tim Burton's "Batman," Sam Raimi's Spider-Man trilogy, the X-Men series. All were lots of fun, all descended into fatal decadence -- as exemplified by Joel Schumacher's "Batman & Robin," quite possibly the worst film ever made in any language or tradition -- all have since been zombified and ripped from the grave for another go-round, with emphatically mixed results. There's nothing new about any of that, arguably. One of the defining characteristics of Batman and Superman and all their kind is their malleability, their immortality, their apparently endless recyclability.

But for the love of Christ, at what point is the triumph of comic-book culture sufficient? Those one-time comic-book pariahs are now the dominant force in pop-culture entertainment, and their works are deemed to be not just big but also relevant and important, much the way that Cecil B. DeMille's crap-history spectacles were in another day. This latest series of Marvel adaptations, mounted on a scale that would make Richard Wagner blush, has attained baroque heights of meaninglessness that make the James Bond movies seem like Strindberg by comparison. I would agree, by the way, that Stan Lee and his many acolytes and followers have created a kind of modern syncretic mythology, and that over the long, long haul both the Marvel and DC universes have incorporated some narrative complexity and some sense of mortality. That's not possible in two or three hours of mass-market entertainment, so we get these movies with zero dramatic arc, where the protagonists' fates are never in doubt and the central issues are all technical: Iron Man's ass-kicking fight scene with Thor; soulful Bruce Banner's transformation into The Hulk; the precise nature of the alien-invasion force; Scarlett Johansson, hubba-hubba, catsuit.

There's no point getting exercised about public taste: Millions of people out there are eager for the visceral vacation from everyday life that "The Avengers" will provide, and given the difficult task of packing all these superheroes into one story, Whedon succeeds pretty well. (I'd rank "Avengers" above "Iron Man 2" but below the first "Iron Man," roughly on the same level as "Thor.") My problem is less with the movie or its audience or Joss Whedon -- although I honestly don't think being an A-list Hollywood director serves his talents appropriately -- than with the penumbra of bratty, entitled coolness that surrounds the whole project. It's a neat little postmodern trick, actually, to simultaneously position this movie as the most central pop-culture event of 2012 and insist on some kind of edgy, outsider status that renders any and all detractors as pipe-smoking William F. Buckley squares, defending a nonexistent Establishment.

Right up to the end of "The Avengers," I carried with me the faint hope that this really would mark the conclusion of this particular epoch-spanning series of hyperinflated comic-book spectacles. For good or ill, it is not to be: As Marvel fans surely know already, the usual "stinger" follows the closing credits, revealing that behind Loki and the insectoid aliens lurks ... well, somebody or something who will propel us into "Thor 2" or "Iron Man 3" or whatever else is coming. This mimics the way comic books have long worked, of course, and there's something wistful about it: As the transitory ersatz awesomeness of this particular spectacle fades away, like the cinematic equivalent of SweeTarts on the tongue, true Platonic awesomeness is waiting out there somewhere, in the next chapter.