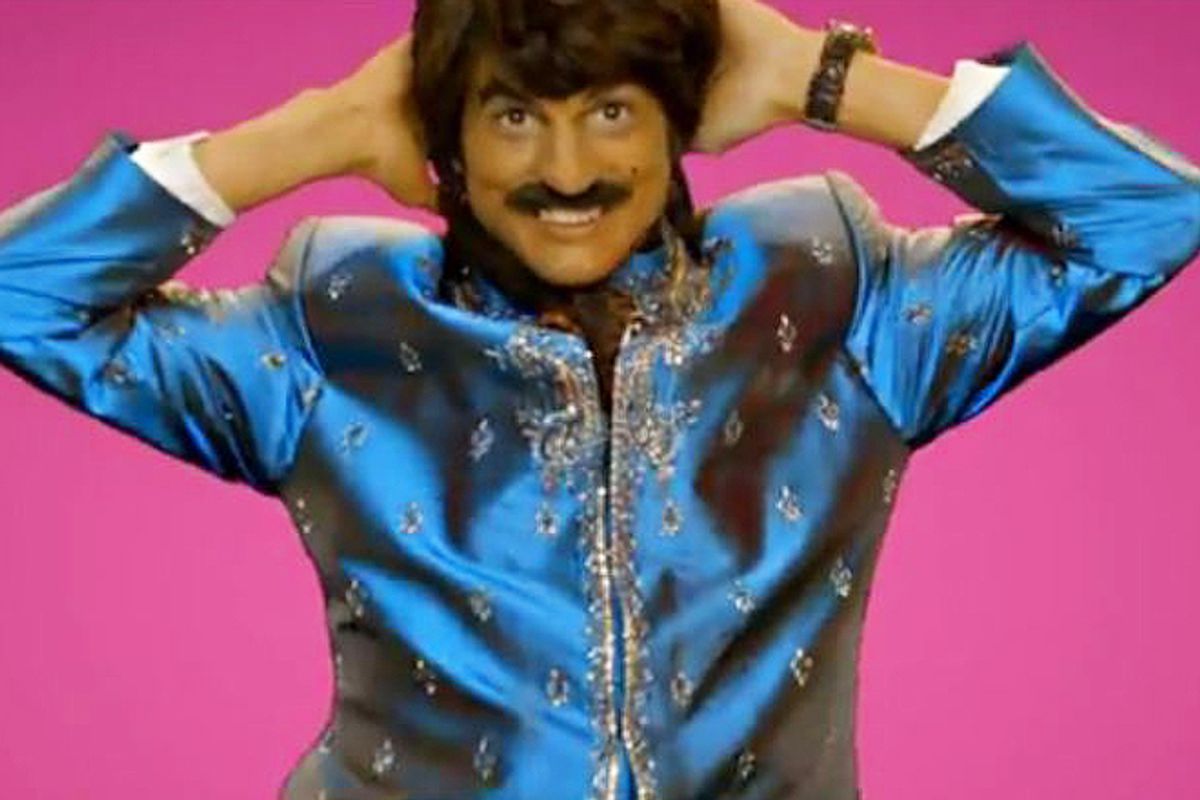 Somewhere, Charlie Sheen is laughing and saying, "At least I never did that." This week, we learned what's even less funny than Ashton Kutcher: Ashton Kutcher in brownface.

In an ill-advised Popchips ad spoofing online dating that launched Wednesday, the "Two and a Half Men" star appeared as a variety of love-hungry "World Wide Lovers" vying for your affection. In a spectacular display of racial tone-deafness, one of them included "Raj." Raj, all darkened skin and heavy accent, is "a Bollywood producer looking for the most delicious thing on the planet." He's looking for something "Kardashian hot ... I would give that dog a bone." He brags that he once won a milking contest, and he does a little dance that will haunt your nightmares.

Shockaroonie, some people found this offensive. The ad went the wrong kind of viral, with a social media explosion of negative feedback. It's not that comedy with a racial element is always wrong wrong wrong. The Jewish Hank Azaria is currently in his third decade of playing the Indian Apu Nahasapeemapetilon on "The Simpsons," and nobody seems to be outraged about this. Kutcher's incredibly unnuanced performance isn't that, though. On his blog, writer Anil Dash explains it perfectly --  "a fake-Indian outfit and voice" constitute "the entire punchline" of the clip. And, as he eloquently put it, "I can't imagine I have to explain this to anyone in 2012, but if you find yourself putting brown makeup on a white person in 2012 so they can do a bad 'funny' accent in order to sell potato chips, you are on the wrong course. Make some different decisions."

And so that's what Popchips is trying to do. On Wednesday, in a "message from Keith" on the company's website, its founder, CEO and foe of proper capitalization Keith Belling wrote, "we received a lot feedback about the dating campaign parody we launched today and appreciate everyone who took the time to share their point of view. our team worked hard to create a light-hearted parody featuring a variety of characters that was meant to provide a few laughs. we did not intend to offend anyone. i take full responsibility and apologize to anyone we offended." That's a constructive, self-aware response to a potential public relations disaster. (Kutcher, who in recent months has been tainted by his hasty Twitter support for Penn State coach Joe Paterno and a divorce that featured rumors of unprotected extramarital sex, has so far had no comment on the problematic ad campaign.)

It's a positive thing that Popchips understood its mistake and made an immediate effort to rectify it by pulling the ad. That step forward is mitigated somewhat, though, by the a large number of "get over yourself" responses on Anil Dash's blog. We've still got much work we need to do in this country around issues of stereotypes and sensitivity, folks.

You don't have to look any further than the entire Popchips campaign to see what I mean. Its remaining "World Wide Lovers" include the stoner Brit "Nigel," who's "seeking higher planes of consciousness" (GET IT????), the effeminate German "Darl" -- a swishy riff on openly gay designer Karl Lagerfeld -- and the dumb redneck "Swordfish." In the end, there's also regular old, newly single Kutcher, who describes the other guys in the club as a "freak show." Hey, geniuses at Popchips – you're still perpetuating gross generalizations. Also: They're not funny. It's a great big snack-loving country. Being cool about brown people – and gay people, and people others would call "white trash" – shouldn't be such a crunch.