My own private recession

At 28, I moved in with Mom. It's the classic hard-luck tale of my generation -- but the only person at fault is me 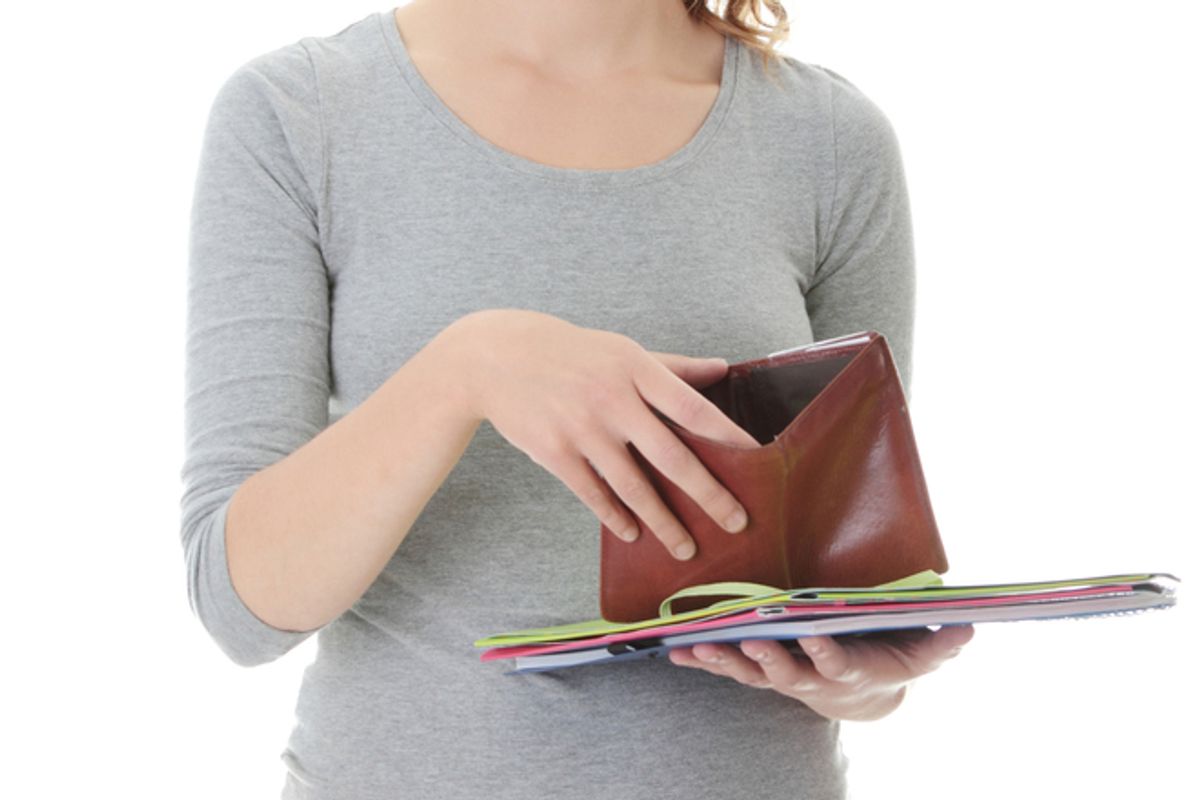 Following the hottest new trend of last two years, I moved in with my mother at age 28. Despite everything, she still showed me off to the ladies at bridge night, just like when I was a kid. “This economy,” the ladies said, shaking their heads at the shame of it. Yes, lucky me, the recession. I could hide among its victims, and no one suspected what I knew.

This was all my fault.

Great timing for my high school reunion. That one question to sum up my first 10 years of adulthood: “So, what have you been up to?”

“Oh, just living with Mom,” I said, throwing an ironic thumbs up. I shrugged. “You know, with this economy…” Not even a full sentence, it worked as an excuse without technically being a lie. They all nodded with sympathy as if something had happened to me, and not because of me.

They’d heard I’d been in the Peace Corps and surely they pictured me suffering, knee-deep in river mud, hand-scrubbing a tattered poncho. Surely they didn’t picture me lounging on a Brazilian beach, or drinking red wine in Buenos Aires. Surely they didn’t picture my fellow volunteers and me heading to the capital at least once a month, watching dubbed American cable and feeding each other crème brûlée we got delivered to our hotel rooms, almost as a joke on poverty. Surely they didn’t suspect that I’d bought myself an air conditioner when my host mom offered to sell me hers and a horse just because it would probably be my only chance in life to have one, even if being a single woman going out in fields by herself started rumors that I was a hussy. They assumed I suffered in poverty, because suffering was supposed to be part of the fun.

But, out of sight of our host families, we gave in to the temptation to grab at the luxury within reach to break up the sweat, grisly meals and discomfort, both social and physical, that made up so much of our lives there. All you had to do was think in dollars, take out a 20 here and there from that one ATM that accessed American banks, and over two years you could deflate your savings on so many small comforts of the First World.

Even though it was my job to teach the locals about sustainability, I was leading my own unsustainable life, outspending my earnings 2-to-1, living on the edge of my credit limit and willfully ignoring the ticking of borrowed time. This is what leads to recession, on any scale.

At my high school reunion, I let the assumed victimhood ride, but at home, Mom knew better.

“You have three months,” she said. My stimulus package: 90 days of free rent, free food, unlimited pool and pool floatie raft access, as well as full-time use of her Jeep Cherokee while she drove her husband’s work truck with the 7-foot blind spot.

I slipped into the refuge of her life, but at night, lying under her seashell comforter, I felt the absence of everything I’d let myself lose. She knocked on her own guest bedroom door and came in, smiling, delighted to have her daughter on the same continent. She sat on the edge of the bed, stroking my hair. “Everything will be OK,” she said, seeing my red eyes. Her voice smoothed the hot shame, even though I had no reason to believe what she said.

The story was always that she and Dad had balanced each other out in every way, except that they were both bad with money. This was my breeding. I had lived paycheck to paycheck since I started scooping ice cream for a living at 14. In middle school, I was the one asking if anyone had 50 cents. In high school, I was the one losing the clothes I’d borrowed from friends. In college, I was the one lying in a clinic, selling my plasma for $20 of beer money.

Windfalls came at times: a tax return or a student loan check. After swearing I’d hold tight to the money this time, I never failed to let it slip through my fingers. Mom had bailed me out so many times that we put her name on my bank account so she could make deposits more quickly. Over the years, I sunk into debt with greater and greater abandon until I now found myself wearing my mom’s shoes to a temp job processing insurance forms.

Mom and I crossed paths in the kitchen while getting ready in the mornings, just like when I was in high school. “Honey, do you want a fruit cup?” she asked, packing me a lunch just this once. As I left, she handed me an insulated turquoise lunch box.

At work that day, I scraped my fruit cup with a plastic spoon and said to the other temps, one of whom was living in a homeless shelter, “You know, right now you just gotta do what you gotta do.”

I couldn’t even begin to make a plan. Plans required hope. After so many failures, failure became an all caps noun that I wore across my forehead at my second job as a bad waitress, pouring coffee for my former high school classmates out to organic brunches with their husbands and babies.

I could barely scrounge up the gas money to visit my best friends in their adult lives. They listened to my speech about digging myself out of the hole, doing the right thing this time and said, “That’s good.” When we went out to dinner, I let them pick up the check, making clear once again who was who.

So, instead of using my paychecks to pay back my mom, I spent them, more than $1,000, on the GRE testing costs and fees to apply for schools that would require more loans to attend. I mailed in the checks and did the approximate math, figuring they’d be OK. I let days pass without facing my bank balance. The longer I procrastinated, the more scared I became of what awaited me behind my user name and password. I held out another day. Then my debit card got declined at the gas station. I used my credit card, which I was pretty sure had at least $12 left to use. Then I went home and had to confront my computer.

Red. NSF. NSF. -$34. -$34. Balance: -$97. By the time I weighed the entire situation, I was hot all over again, panicked as if trapped somewhere, though I was only trapped inside myself.

There was only one place to turn, but the thought of asking my mom for money one more time almost made me nauseous. I had already stretched her generosity so far, who knew when it was going to snap?

When she asked how my day was, I told her what was going on, and she didn’t even make me ask.

She scrunched her brow and stared a second, as if she didn’t recognize the person in front of her.  “Don’t be a taker,” she said.

I had no facial expression in my repertoire to respond to my own mother, looking at me like that, so I just looked down.

Weeks later, I got an acceptance letter to grad school, an invitation to spend $40,000 a year living in one of the world’s most expensive cities, educating myself in the arts, paid for with interest by my future self, guaranteed to be bolstered by emergency loans from my future mom and dinners out from my future friends picking up the tab for their broke grad student buddy. The person I hated myself for being would have accepted. But by that time, I knew what a better person would do, and I knew I wanted to be a better person.

Paulette Perhach is a writer living in Seattle, working a 9 to 5, putting 15% into her 401(k), and paying off her debts with hopes of saving for grad school. Last month, a year and a half after returning from the Peace Corps, she made her last installment to pay back her mother.