The role of Brian Williams is to glorify political and military leaders, but he really outdid himself last night 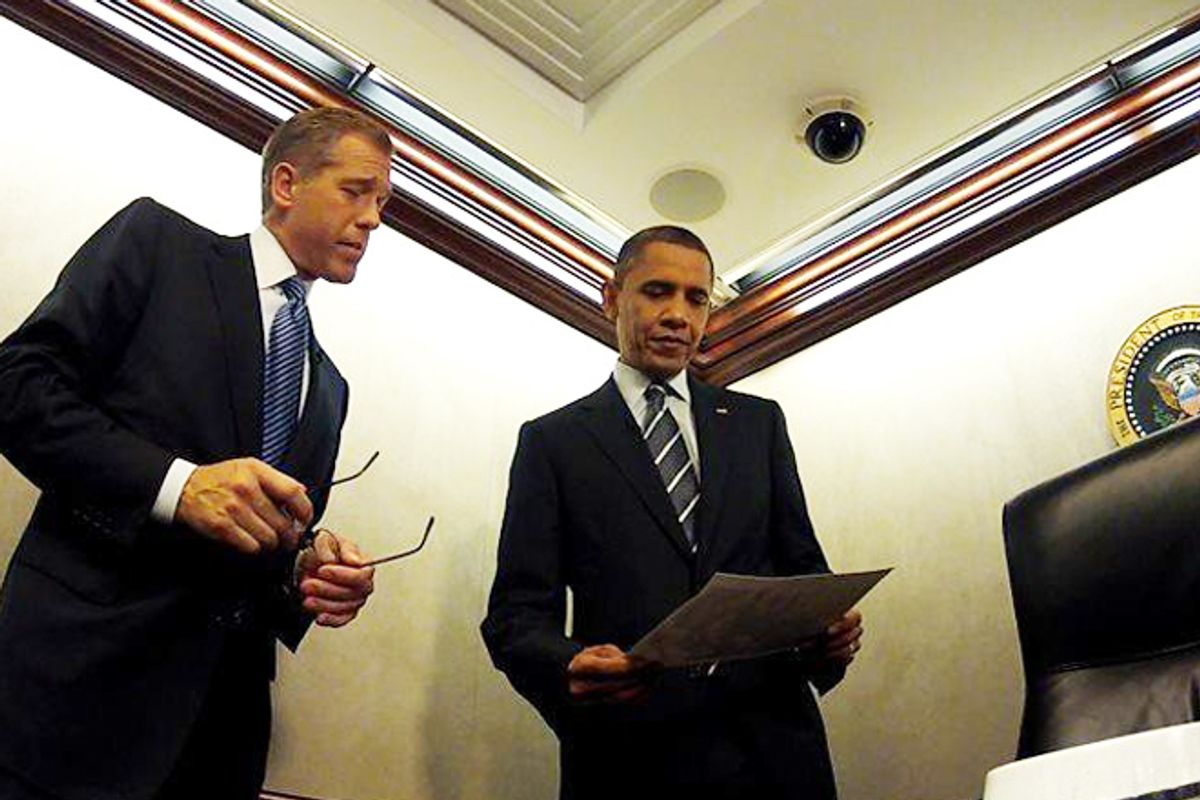 Whatever one's position is on the killing of Osama bin Laden -- and I've always argued that there is a range of reasonable views -- there are many journalistically important questions and significant disparities that still need serious examination (with all due respect (i.e., none) to John Kerry's dictate that we all "shut up and move on"). For one, as both Mother Jones' Mark Follman and my former Salon colleague Justin Elliott have extensively documented, there are -- due to multiple conflicting White House claims -- numerous unanswered questions about what really happened on the raid.

There's also the question of why Obama aides like John Brennan spouted outright falsehoods to the world on key questions (such as whether bin Laden was armed or used his wife as a "human shield" and whether there was a "shootout" in the house). There are conflicting claims about whether a full video recording of the raid exists. There's the contradictory administration behavior of resisting lawsuits seeking any disclosure about the raid on secrecy grounds while simultaneously boasting publicly about the details of the raid for political gain. And there's the question of whether previous American statements -- and the principles of Nuremberg -- would have made it better (or even legally necessary) to apprehend bin Laden for trial; whether doing so was reasonably possible; and whether that was permitted by the mission plan.

None of those questions was even acknowledged, let alone meaningfully addressed, by last night's one-hour melodramatic extravaganza hosted by NBC News anchor Brian Williams. This bin Laden show -- "Inside the Situation Room" -- was hagiography in its purest, most propagandistic, and most subservient form. This is typically the role Williams plays -- he cleanses and glorifies American government actions, especially military actions, with his reverent, soothing, self-important baritone -- but he really outdid himself here.

From the start, Williams proudly displayed his child-like excitement over his special access: "television cameras are inside the Situation Room for the very first time," he gushed. As he stood outside of the sacred room, holding the now-iconic photograph of Obama officials watching the raid, he intoned: "We are one floor below the West Wing of the White House and we are about to take television news cameras inside the White House Situation Room for the first time in its history." (Do people like Williams, or Peter Bergen and David Ignatius, ever wonder why they are chosen to receive such official honors and how that reflects on whether they engage in actual adversarial journalism, or do they just avoid looking these royal court gift horses in the mouth?) For his first inquiry, Williams, holding his spectacles in his hand, noted that he was standing behind the very same chair where the President sat that night, and -- as he showed Obama the photo -- unleashed his first question, one of the most challenging ones he posed that night: "there you are -- that's an intense look on your face, and everyone is intently watching that screen."

In essence, the entire show was devoted to uncritical veneration of our national political and military leaders. It was as vapid as it was propagandistic; as Josh Gerstein wrote: "Much of the program was devoted to the thoughts and feelings of the senior officials involved and to such details as Biden clutching his Rosary ring as the raid unfolded and the sourcing of the food consumed by officials on that fateful day." We got to hear about how the President's daughters reacted upon hearing of bin Laden's death, and how very difficult it was for him to attend the White House Correspondents' dinner that evening. The coolness of American military gadgetry was constantly on display (the SitRoom has multiple digital clocks for different time zones, one of which always shows the time where the President is located, as well as some really big and flat TV screens!).

There was no dissent, no critical scrutiny of claims, no raising of difficult questions, no facts revealed. It was all reverent praise and uncritical amplification of official government claims. In sum, it was consummate American establishment journalism. Even if you're someone who entirely approves of the raid and sees it as a rare American success over the last decade, uncritically bostering feel-good triumphalism about American political and military leaders is not the role of journalism (in theory, that is), and nobody should want it to perform that function.

The debut of Julian Assange's television show on Kremlin-created RT a couple weeks ago produced some debate over state-controlled propaganda. This is why I found all the hand-wringing in the American media over his show to be so disingenuous. If an American media figure wants to rail about state-subservient media propaganda, they don't need to look to all the way to Moscow to find it. It exists in robust abundance right at home. Brian Williams doesn't occupy the position he occupies -- as America's Most Serious and Visible News Anchor -- despite his vapid glorification of American political and military leaders; he occupies it precisely because he's so good at doing that. That's the prime requirement of this job.