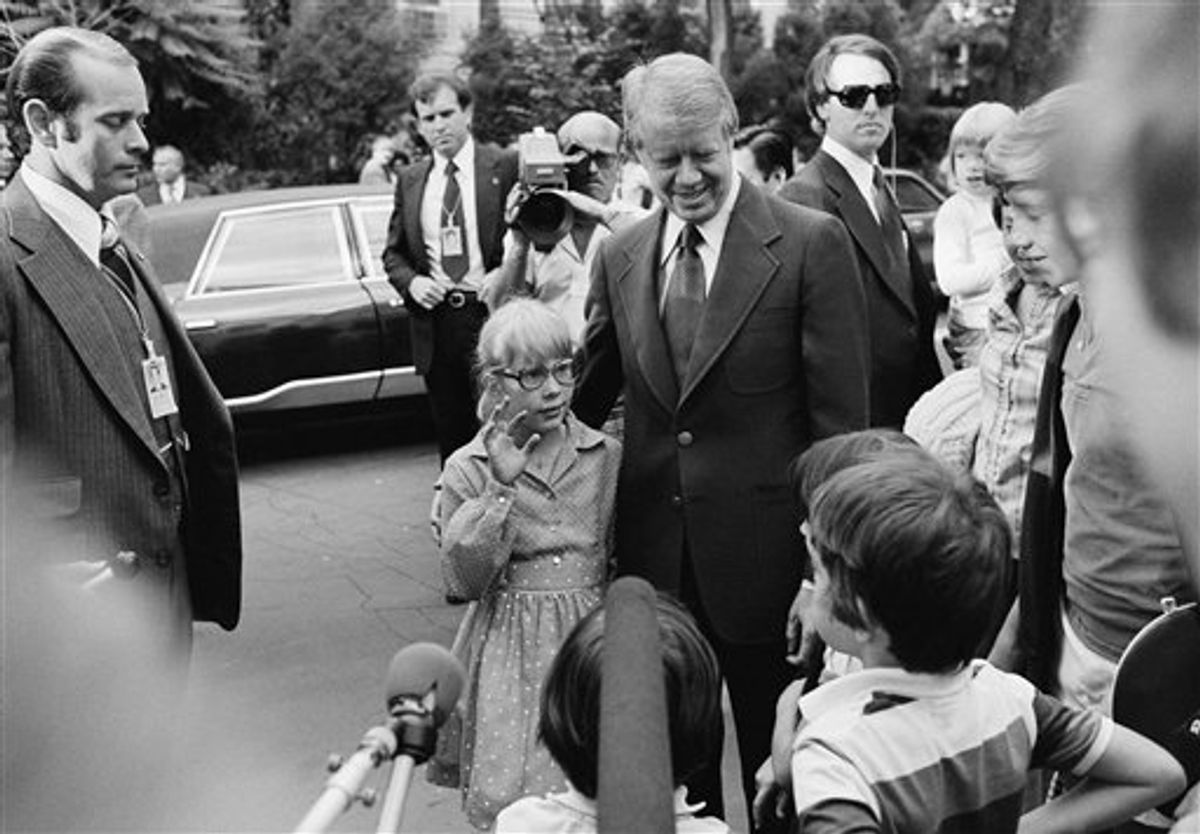 FILE - In this June 8, 1977 file photo, President Jimmy Carter stands with his daughter Amy as she waves to other children on the street in the Georgetown section of Washington, guarded by Secret Service agents. Carter went to Georgetown to dine at the home of Management and Budget Director Bert Lance. The Secret Service has been tarnished by a prostitution scandal that erupted April 13, 2012 in Colombia involving 12 Secret Service agents, officers and supervisors and 12 more enlisted military personnel ahead of President Barack Obama's visit there for the Summit of the Americas. (AP Photo/Barry Thumma) (AP)
--

A few weeks ago, Jimmy Carter made headlines by pronouncing himself “comfortable” with the idea of Mitt Romney being president.

“He’s a good, solid family man and so forth, he’s gone to the extreme right-wing positions on some very important issues in order to get the nomination,” the former president said. “What he’ll do in the general election, what he’ll do as president I think is different.”

This was interpreted as a straightforward expression, but Romney behavior this week suggests another, more devious possibility – that Carter was being a good Democrat and doing his part to undermine the presumptive GOP nominee’s message.

Twice this week, Romney has gone out of his way to make a scornful reference to Carter in an effort to tether him to Barack Obama. In Chantilly, Va., yesterday, Romney branded Obama “the most anti-small business president that I've seen probably since Carter.”

He added: “Who would've guessed we'd look back at the Carter years as the good old days, you know?"

This came two days after Romney replied to questions about whether he would have authorized the raid that killed Osama bin Laden by saying, “Of course. Even Jimmy Carter would have given that order."

Nor is this a new theme for Romney, who’s been portraying the current president as the second coming of the 39thpresident since launching his candidacy. Back in October, for instance, his campaign put together a package of quotes from Obama matched up with similar-sounding passages from Carter’s so-called malaise speech. And Romney’s not alone. Republican politicians and commentators have been playing the same game since Obama emerged as the Democratic nominee in 2008.

“Barack Obama,” Donald Trump declared when he was running at the top of Republican presidential polls last year, “has replaced Jimmy Carter as the worst president ever.”

Actually, the right’s Carter obsession goes back much further than ‘08. Pretty much since he left office in 1981, Republicans have ominously warned in every presidential election of the threat of “another Jimmy Carter.”

At first, this made plenty of sense. In 1984, for instance, Ronald Reagan ran ads that asked “why would we ever want to go back” to the Carter days – a logical message for a first-term incumbent eager to maximize the sense of achievement around his administration. But the Carter message has endured for decades.

“If people want another Jimmy Carter, they can vote for Bill Clinton,” the chairman of the Republican National Committee warned in 1992.

“The vice president's Carteresque personality may be irksome,” conservative columnist James Pinkerton wrote of Al Gore in 2000, “but it's also the gateway to Carteresque policy -- and that's even more worrisome.”

Conservatives’ dedication to Carter-bashing can be chalked up to two factors. The first is an outgrowth of their Gipper-worship, which holds that Ronald Reagan single-handedly rescued the country from rampant international weakness and ridicule and the brink of domestic socialism. For this narrative to work, Carter has to be portrayed as a particularly radical and villainous president – and since the right is forever trying to re-create the magic of the Reagan years, it follows that every Democratic president (or would-be Democratic president) must be treated as another Carter.

Of course, this version of Carter and his presidency represents a crude and misleading caricature. In the right’s imagination, he was a left-wing ideologue, but the reality is that Carter governed from the center.

Or at least he tried to govern from the center, which brings us to the other reason Republicans won’t stop invoking Carter: His presidency really was an unsuccessful one, marred by soaring inflation and interest rates, long gas lines, an endless hostage crisis, and sagging national confidence. His approval rating barely cracked 30 percent for much of his term, and voters were eager to fire him in 1980.

It wasn’t a leftist agenda that caused this (Carter’s hostility to organized labor and other traditional Democratic constituencies actually caused a civil war in the party during his presidency), but the fact remains that voters retained very negative memories of his presidency for years after it ended. And even though Carter’s admirable post-White House work has restored his personal popularity, the public tends to take a less charitable view of his work as president. This, obviously, is the sentiment that Romney and his fellow Republicans are trying to tap into.

If there’s a silver lining for Democrats, it’s that after decades of being taunted with Carter comparisons, they finally have something to fight back with. A key component of Obama’s reelection strategy consists of arguing that a Romney presidency would be no different than George W. Bush’s presidency. It’s something Obama will be saying for the next six months – and that future Democratic nominees will be saying about their opponents for years to come.