The NYPD May Day siege

Pundits can argue back and forth over what Occupy's May Day achieved, but I just can't get over the police presence 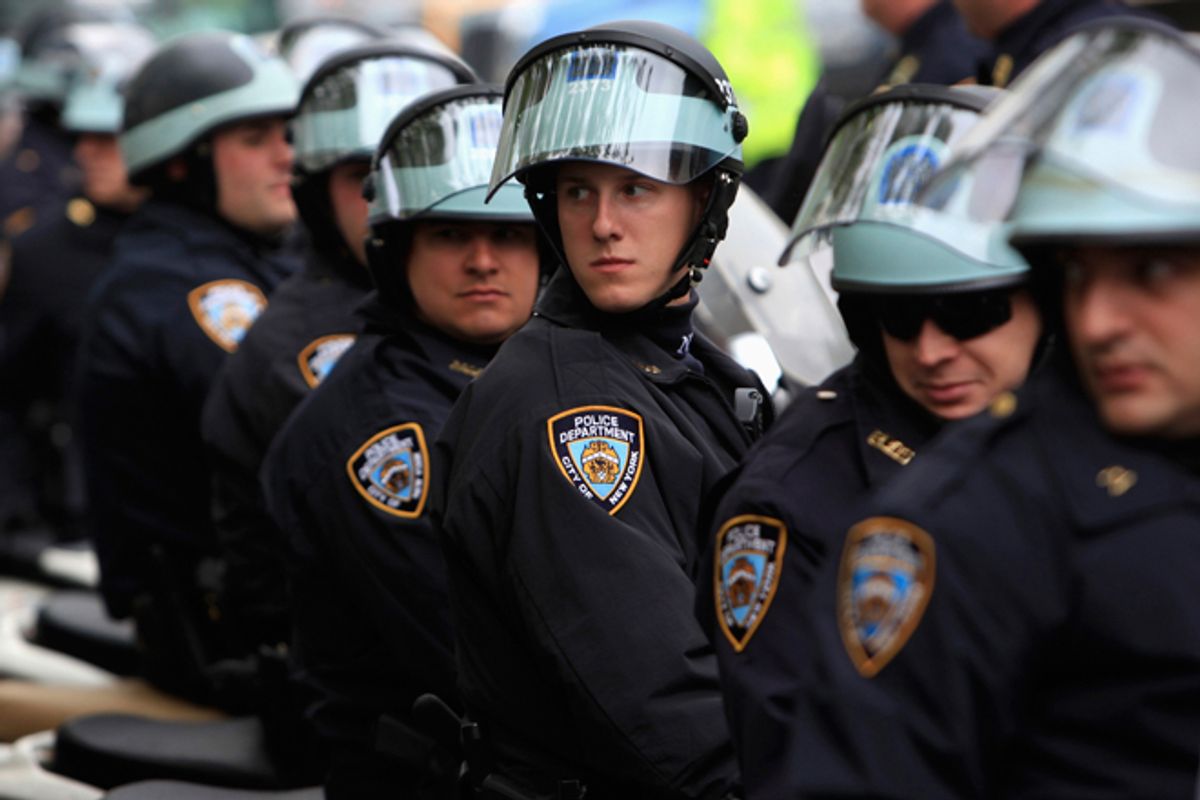 A number of reports have pointed out that the Occupy calls for a May Day general strike drew tens of thousands in the street Tuesday -- with actions from the militant to the family-minded -- in cities across the country, particularly in New York and Oakland, Calif. The culmination of scheduled action in New York -- a mass march of around 30,000 union workers, immigrant workers and OWS supporters that descended (with a permit) on Manhattan's financial district -- felt powerful from within, as chanting bodies jostled south. But I jumped over the barricades, which hemmed in the crowd, and walked a few blocks away. Only a muffled din signaled the crowd's presence nearby; that and the constant flow of riot cops flooding past me and the police vans lining the street as far as the eye could see.

Ample ink has already been spilled (outside the mainstream press, that is) about May 1, some praising Occupy's success in staging events like teach-ins and the permitted solidarity march, which garnered a diversity of support from union and community groups; some point out the obvious -- that no May Day actions actually shut down any of America's vast metropolises; some have decried the property damage carried out by participants in Seattle; Reuters first reported the day as a "dud" and then recanted, noting it "far from a dud." We could debate forever, using different, incommensurable metrics, as to whether May Day was or was not successful. But when I think about my Tuesday on strike, my memory is of New York City shrouded in an impenetrable blanket of police.

Having reported on, and participated in Occupy actions for seven months, heavy police presence is by no means unusual. Cops routinely flank banks when protests are called outside, they surround squares where Occupy groups gather, and are swift to disperse any attempts (even when legal) to assemble against capitalism in New York's public spaces. But on Tuesday, I left downtown Manhattan shell-shocked.

It began on Monday night, when the NYPD, aided by the FBI, raided the homes of prominent activists in New York. Following these preemptive, unwarranted visits -- during which activists were questioned about May Day plans --  the police presence throughout Manhattan on May 1 was incomparable to anything I've seen in my three short years in the city. Friends, whose time in New York and its radical subcultures far predate mine, agreed; they'd never seen anything quite like it.

Notably, the unpermitted "Wildcat March," called by New York anarchists and anti-authoritarians, was surrounded by hundreds of police before the 300-strong crowd could even leave its rallying point at Sarah D. Roosevelt park. Barely reaching the sidewalk from the park's steps, a line of cops stormed into the march's front banner, snatching and grabbing three participants. I joined a running splinter group as the crowd was chaotically dispersed into smaller marches; we then proceeded, almost one cop to every striker, as we made our slow way to regroup at Washington Square Park.

I didn't head to the Union Square rally to join crowds swelling to over 10,000; I missed the hundreds of guitarists marching alongside Rage Against the Machine's Tom Morello in a "guitarmy"; I missed musical performances, free food and free lectures from prominent thinkers like Francis Fox Piven and David Graeber. Instead I wandered around Manhattan in shock and awe with a handful of co-strikers, counting as I passed every block: at least four cops per corner. The buzz of a police helicopter overhead continued all day; I couldn't count the number of police vehicles.

Writing for In These Times, Rebecca Burns points out that the police have changed their tactics since the early days of Occupy. Although on May 1 Oakland police once again deployed tear gas, we did not see the mass arrests or large crowd kettles typical of police responses in previous months. Burns notes: "Unlike the now-familiar Occupy scene of demonstrators being arrested en masse in dramatic, late-night evictions, May Day protesters in many locales were arrested individually throughout the day, in some cases for crossing over onto sidewalks or, according to local media on the scene in Oakland, seemingly at random." There were only a reported 97 arrests in New York relating to May Day activity.

Snatch-and-grab police tactics intimidate crowds, but do not lead to the sort of dramatic mass arrest scenes that capture national headlines; it's a more insidious form of crowd control. It is worth adding, however, that there was no shortage of police aggression: At one point I saw firsthand as a marcher was grabbed by police in the Lower East Side, his face slammed to the street. When pulled up and taken away, officers covered his face with his T-shirt so onlookers could not see the blood.

Then, after the mass evening march in New York had finished and no more than a thousand people had moved to the Vietnam Veteran's Memorial park at Manhattan's southerly tip, the NYPD once again covered the area. Some remaining hundreds of the May Day participants had gathered for a mass general assembly; others milled around, sharing stories about the day or dancing to the ever-present drumbeats. The police encircled the small concrete park in time to disperse the relaxed crowd at 10 p.m., when the park closes. Clad in riot gear, the number of officers kept growing; hundreds and hundreds on foot and in vans surrounded the memorial park and every office building, street and corner. The NYPD is a standing army of around 35,000, and on the evening of May 1, New York felt like a city under military siege -- it was terrifying.

Those of us who have been inspired by Occupy over the past year, those who see the importance of reclaiming and repurposing space (for public use that is not commerce), and who see the necessity of manifesting in the streets, are not fizzling or losing momentum. We are, however, being trampled, pushed, threatened and dispersed at every turn by well-armed, militarized police forces who once again made clear: We are not allowed to assemble on our own terms in this country.