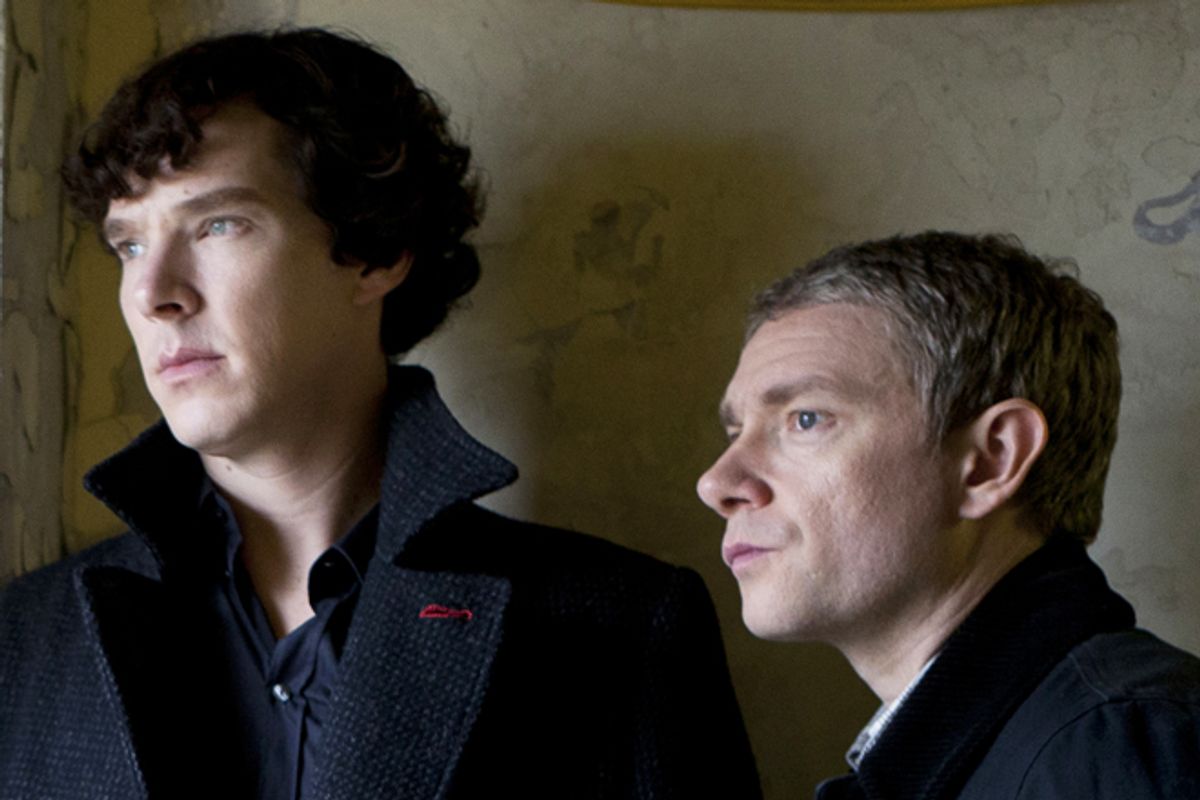 As the Internet has helpfully pointed out, Benedict Cumberbatch looks like an otter. The preposterously, even pervily named Cumberbatch, stars in “Sherlock,” a modern-day adaptation of the legendary Sir Arthur Conan Doyle stories beginning its second season on PBS this Sunday. He has tiny, intense eyes, slashes of bright blue on a face composed of geometric planes, all cutting cheekbones jutting out of a flat face, finished off with a mop of curly brown hair and a flowing, high-collared overcoat. Early in the series' first season, a skeptical detective pointed out that a genius like Holmes could easily break bad, just one bout of boredom away from committing the crimes he solves so effortlessly, and the cool, charismatic Cumberbatch conveys the implicit threat that underlies this Holmes easily. Otters are cute, but they’re also squirrelly.

Like the first season— which is streaming on Netflix, should you desire to catch up — the new one consists of three one-and-half hour installments, making it more like a miniseries, or three self-contained films, than a shambling, outsize TV series. The first episode picks up exactly where the first season left off, with “consulting detective” Holmes and his devoted friend and former soldier Dr. Watson (Martin Freeman) facing off against arch-nemesis and psycho James Moriarty (the impressive Andrew Scott). But after this five-minute intro, any new watcher can dive right in.

“Sherlock” is an elegant updating of Conan Doyle’s stories, not an overhaul. This season’s three cases are based on the most famous Holmes stories (“A Scandal in Bohemia,” “The Hounds of Baskerville” and “The Final Solution”) and, if while solving them, Sherlock never says “elementary,” he does say “obviously” quite a bit. This Holmes never refers to Watson as “My dear,” but in every single episode there is a winking reference to the fact that Holmes and Watson are often mistaken for more than just colleagues.  Watson doesn't write up Holmes' exploits with pen and paper, but on his blog. Thanks to that blog and Holmes' exploits, Sherlock becomes a legend in his own time. To escape the paparazzi he even slaps on the iconic deer-stalker, immediately turning it into a Sherlock Holmes hat.

This Sherlock is like the original in constitution as well. He has little time for feeling or formalities, he’s imperious and disdainful, manic and captivating, masterful and idiotic, all-seeing and blinkered, indifferent to almost everything and everyone except his own boredom. He can extrapolate from worn elbows and crumbs a person's life story, and he never tires of explaining his deductions in impressive, showy and expository exegeses. But in contrast to the original Sherlock, there is now a term to describe this constellation of characteristics: Asperger's, which Dr. Watson levels at Holmes in passing. And just like TV’s other shows starring Aspergian savants — "Community's" Abed, "Big Bang Theory's" Sheldon, "Bones'" Dr. Brennan — “Sherlock” is fundamentally about making and keeping lasting, meaningful relationships. "Sherlock" can be a kicky, good time (see: Irene Adler rubbing up on Holmes', uh, intellect in the first episode) and a stressful, scary thriller (see: Moriarty ruthlessly capturing Holmes in a complex trap in the third) but its major mystery is friendship and how a towering but difficult guy like Sherlock Holmes can have one.

“Sherlock” does have a problem, though it's a structural one that plagues all TV mysteries. Written fiction overflows with descriptions, of rooms, of clothes, of the weather, of behavior. In a written detective story, it's possible to slip in a sentence about a bad guy fiddling with his fingers that has no more weight than another sentence about how the light falls on his face, or how he cuts an apple, or sits in a chair. Video is not nearly so subtle, and when a camera takes a second to show a bad guy tattooing a beat across his knee it calls attention to itself: Why would this shot be here, if not for a reason? TV and film are not flabby mediums and every image and line in a well-constructed piece of work signifies. The camera gives the audience clues even Sherlock doesn’t have. Sherlock remains miles ahead of us, but it still doesn't seem quite fair.