Forget Starbucks: It's the gourmet grocer that lands just before neighborhoods really explode 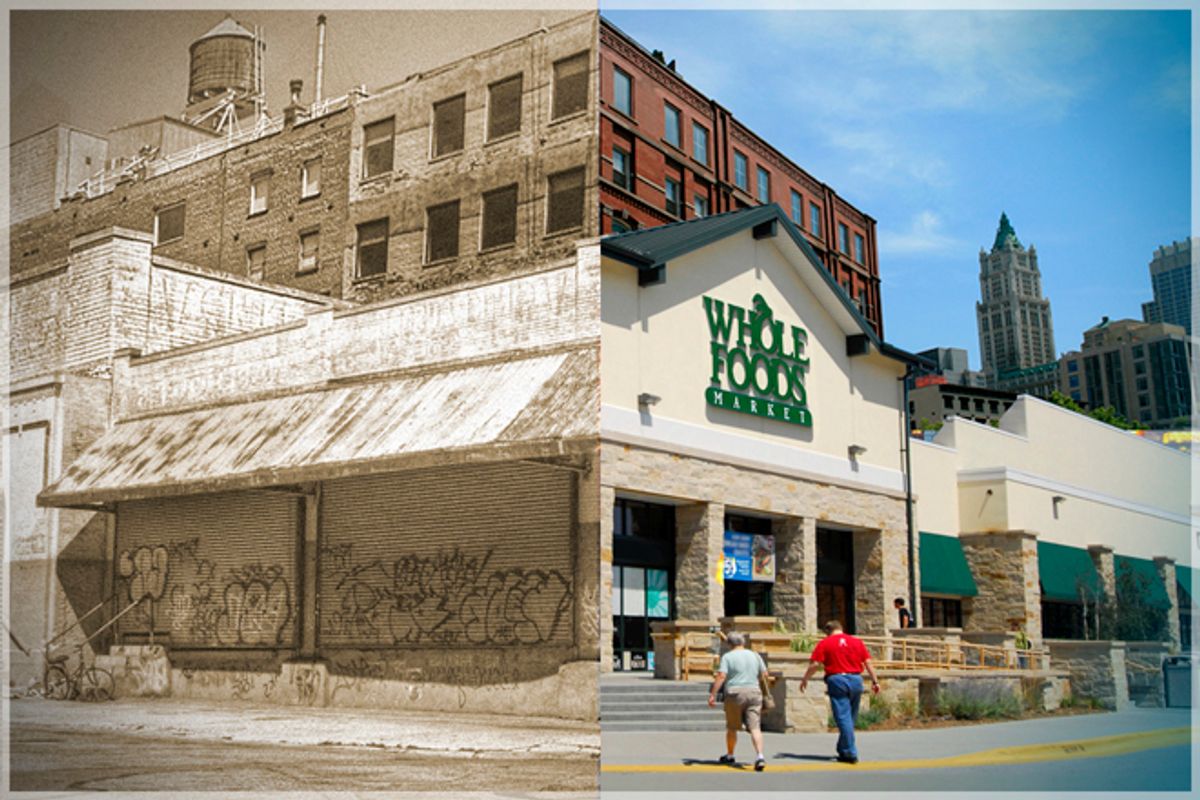 If you ask Whole Foods why it's breaking ground on a store in Midtown Detroit this month, it'll say it wants to be part of "an incredible community" and "make natural foods available to everyone."

And that may be. But it's also true that the Austin, Texas-based retailer has made a science of putting down roots in urban locations at what often seems to be just the right moment. In Washington, D.C., near Logan Circle in 2000, Uptown New Orleans and the East Liberty section of Pittsburgh in 2002, Boston's "Latin Quarter" in Jamaica Plain in 2011 -- areas that other specialty grocers might have considered unworthy of goat cheese and ostrich eggs, but that were actually on the verge of a boom that, lo and behold, kicked into high gear as soon as Whole Foods moved in.

"Whole Foods will move into neighborhoods that, at first glance you think, why are they moving there?" says Bill Reid, a principal at the Portland, Ore., land-use consultancy Johnson Reid. "But they're confident in their numbers."

The company is so good at the real-estate game that it has spawned a catchphrase, the Whole Foods Effect, a phenomenon Detroit is clearly banking on -- the developer of the site is receiving $4.2 million to build there. That figure suggests city leaders believe that Whole Foods is a force unto itself that can give a neighborhood the escape velocity it needs to break free of its doldrums. Are they right?

Whether the Whole Foods Effect is real, or the company is just extremely good at slipping into areas that would have gone upscale anyway, has never been directly quantified. But evidence suggests that Whole Foods can accelerate gentrification in particular ways. A new Whole Foods may not cause property values to shoot up on its own, but it can set into motion a series of events that change neighborhoods.

Take Gowanus, a windswept, post-industrial section of Brooklyn, N.Y., that's home to a few bars and art spaces but is essentially a no man's land sandwiched between the tonier neighborhoods of Park Slope and Carroll Gardens. Though Whole Foods announced in February it would open a 56,000-square-foot store there, Jim Cornell, senior vice president at Corcoran Group Real Estate, said prices in the neighborhood didn't budge. "What [the announcement] did do, however, is give Gowanus, which already has a burgeoning arts and entertainment scene, additional credibility as a place to live," he says. Fully half of his potential buyers have asked about the Whole Foods.

This "seal of approval" quality is Whole Foods' Midas touch; as with streetcar tracks, potential gentrifiers see it as something tangible that certifies a neighborhood as a quality buy. And not just residents; businesses, too, look to Whole Foods as a disciplined pioneer that does its homework. (The retailer is debt-free, growing steadily and has 50 new stores in the pipeline.)  Sue Mosey, president of Detroit's community development organization Midtown Inc. and a key player in bringing Whole Foods to Detroit, is hoping other businesses follow. "We definitely feel that just the signal that there's a quality national operation moving in will interest other businesses," she says.

But it's not just what Whole Foods signifies -- it's the evidence of success that it generates. "Before a Whole Foods goes in, if there's not much private investment in that district, there's no data for developers to look at," says Reid. A publicly traded behemoth is a data-generating machine. "You can go to their annual report and see how many customers they're getting, how much traffic," which lures other potential developers. And those other developers can bring Whole Foods' numbers to a lender to get a loan. "To a lender and a developer, those are bankable numbers," says Reid. "They're as good as gold for a business."

Which brings us back to how Whole Foods picks the locations where it can get those good numbers. Its most basic criterion is reportedly 200,000 people, a good portion of them college educated, living within a 20-minute drive. Amanda Musilli, the company's Detroit Community Liaison, demurs when asked to elaborate, saying only that Midtown is "a community that's going through a transformation right now." About that, she's absolutely right. The average household income of new home buyers in Midtown Detroit is now nearly $113,788, the highest in the city. And the neighborhood is facing a housing shortage (a miracle in Detroit), thanks to financial incentives offered to residents who move there. There's also the $33,000-a-year College for Creative Studies nearby, packed with free-range foodies. If Whole Foods can succeed anywhere in Detroit, it's here.

If it does, property values could eventually rise significantly. An exhaustive 2007 study by Johnson Reid quantified the effects that individual urban amenities have on home prices. Using hedonic modeling, it found that a specialty grocer will increase surrounding home prices by an average of 17.5 percent, more than bookstores, bike shops or gyms (with the caveat, of course, that this varies greatly depending on the situation -- in the instances studied, the increases ranged widely from 6 to 29 percent).

But wait -- I thought Whole Foods doesn't raise real-estate prices. Not in isolation, and not right away. But like the retailer's potential to attract residents and businesses, the Whole Foods Effect isn't caused by the store itself, it's caused by the events it sets into motion. And one thing Whole Foods does is stay open later than a lot of the other shops around it, laying the groundwork for expanding the length of that neighborhood's day.

"What something like a movie theater or a Whole Foods does is it creates an extended-hours district," says Reid. "Lots of downtowns close up shop at 6, but there are certain amenities that can make a downtown go from being a 10-hour thing to a 16-hour thing." When this happens, evening foot traffic arrives, and new types of business can thrive. When Whole Foods moved onto P Street in Washington, D.C., 13 years ago, the only nightlife on the block was a divey (and awesome) rock club called the Vegas Lounge. The Lounge is still there, but it's since been joined by a popular burger joint called Stoney's, a "food-to-fork" locavore restaurant called Logan Tavern that owns a farm 30 miles south of the city, a Starbucks (open till 8 p.m.), a coffeehouse-slash-bar called Commissary and several retail stores, all squeezed onto the same block as Whole Foods.

Once evening-oriented development starts attracting people from outside the neighborhood, the area acquires what realtors call the "dwell factor," a fancy way of saying it gets used in multiple ways. When we talk about the value of mixed-use neighborhoods, we're often thinking of physical attributes -- housing, retail, parks -- but you could just as easily think of "mixed-use" in terms of time: school and work during the day, shopping in the afternoon and evening, restaurants, bars and entertainment well into the night.

Could a Safeway gentrify a neighborhood like Midtown Detroit? Could a Wal-Mart? Probably not in the same way. Not only do those brands not lure the high rollers that Whole Foods does, they don't create an upscale version of what University of Chicago sociology professor Terry Nichols Clark calls the urban "scenescape," the theory that public space is an idea as much as a physical place. Urban amenities have a multiplying effect on their immediate area -- a Whole Foods is more likely to end up in a neighborhood with similar amenities, and vice versa. Jamaica Plain has had a big supermarket since 1964 called the Hi-Lo, known for its Latin-American items, which Whole Foods replaced. But the Hi-Lo didn't gentrify the neighborhood -- J.P. didn't really start changing until the 1990s. That's because Hi-Lo and Whole Foods aren't just stores, they're ideas that lead to similar ideas, and attract people who identify with those ideas in cyclical fashion.

Whether you think this is a good thing or a bad thing depends on what you believe your neighborhood needs: sustained affordability, or a gentrifying shot in the arm. Midtown Detroit is hoping for the latter. Unlike Jamaica Plain, where a vocal group of activists fought the new Whole Foods, opposition in Detroit has been virtually nonexistent. In fact, one of the most common concerns has been that Whole Foods will give the city a half-size store. (The company swears that it won't.) Because just in practical terms, the city needs more places to buy groceries: Detroiters spend $200 million at suburban grocers each year because the city itself doesn't have enough stores. But this is about more than having a supermarket. It's about the gravitational force of a single establishment. In 2008, a gourmet grocery store called Zaccaro's opened in Midtown -- and closed less than a year later. Time will tell whether truffle oil will have better luck in the Motor City this time around.