It's not quite morning in America, but ...

How do you sell your presidency as a success when anxiety and pessimism are rampant? 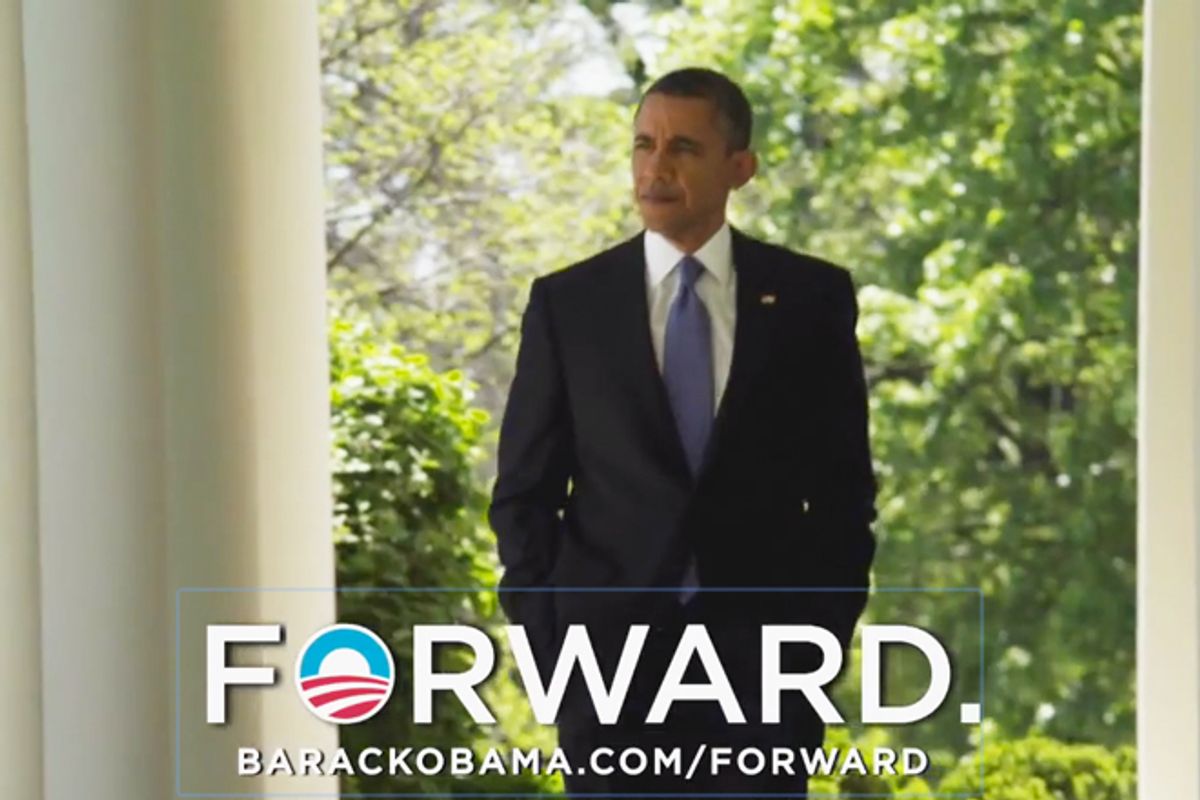 There is some evidence that a potentially critical chunk of swing voters are factoring in the horrific economic conditions that Barack Obama inherited from George W. Bush and giving him the benefit of the doubt.

Obama’s ability probably depends on this sentiment enduring. Mitt Romney’s strategy, it’s long been clear, involves stoking the public’s economic anxiety with dire (and often misleading) statistics and anecdotes and using broad-stroke denunciations of Obama’s “failed leadership” to encourage swing voters to just go ahead and fire him. It’s a simple, blunt approach that relies on the electorate’s tendency to exist in the present tense, without much collective memory or foresight. Obama has the tougher task. He’s selling context, and somehow needs to convince swing voters to say, “Yeah, the economy’s bad, but …”

This, as Greg Sargent explained this morning, is what makes the president’s newest ad noteworthy. The 60-second spot is designed to tout Obama’s leadership and achievements and to generate excitement about the idea of reelecting him. But given the state of the economy and the pervasive pessimism among voters, it’s impossible to run a classic positive reelection ad without it seeming oblivious to the anxiety and suffering so many Americans are facing. So before touting the rescue of the auto industry, the killing of Osama bin Laden, and the creation of 4 million new jobs, the ad first flashes back to 2008, using old news clips and ominous music to remind viewers of the financial meltdown that took place just before his inauguration:

The key line comes near the end: “We’re not there yet. It’s still too hard for too many. But we’re coming back.” When it comes to modern presidential politics, Obama is essentially in uncharted territory here, so it’s impossible to say how effective ads like this will be (or whether they’ll be effective at all). It’s true that the readiness of voters to throw out an incumbent president is generally related to their feelings about the economy, but there really are no examples since the Depression of a president walking into an economic crisis like Obama did – especially one that came at the end of eight years of rule by the other party.

Still, it’s interesting to contrast the new Obama spot with what remains the gold standard for presidential reelection advertising – the “Morning in America” ad that Ronald Reagan’s campaign ran in 1984:

The Reagan campaign launched that spot in May ’84, and liked it so much that they brought it back in the fall. More than anything, it illustrated why Reagan faced such an easy reelection path that year. There was a broad consensus that the economy had dramatically improved on his watch, so the syrupy music and Normal Rockwell images fit how many voters were feeling. There was no need to show Reagan, whose name was only mentioned once, and there was only a passing shot at the opposition party (“Why would we ever want to return to where we were less than four short years ago?”). It’s the spot that every president running for a second term dreams of running.

The influence of “Morning in America” is clear in Obama’s new ad. But so is the very different nature of the challenge he faces.