"Where the Wild Things Are" captured the spirit of the 1960s -- but for my kids, its message remained just as vital 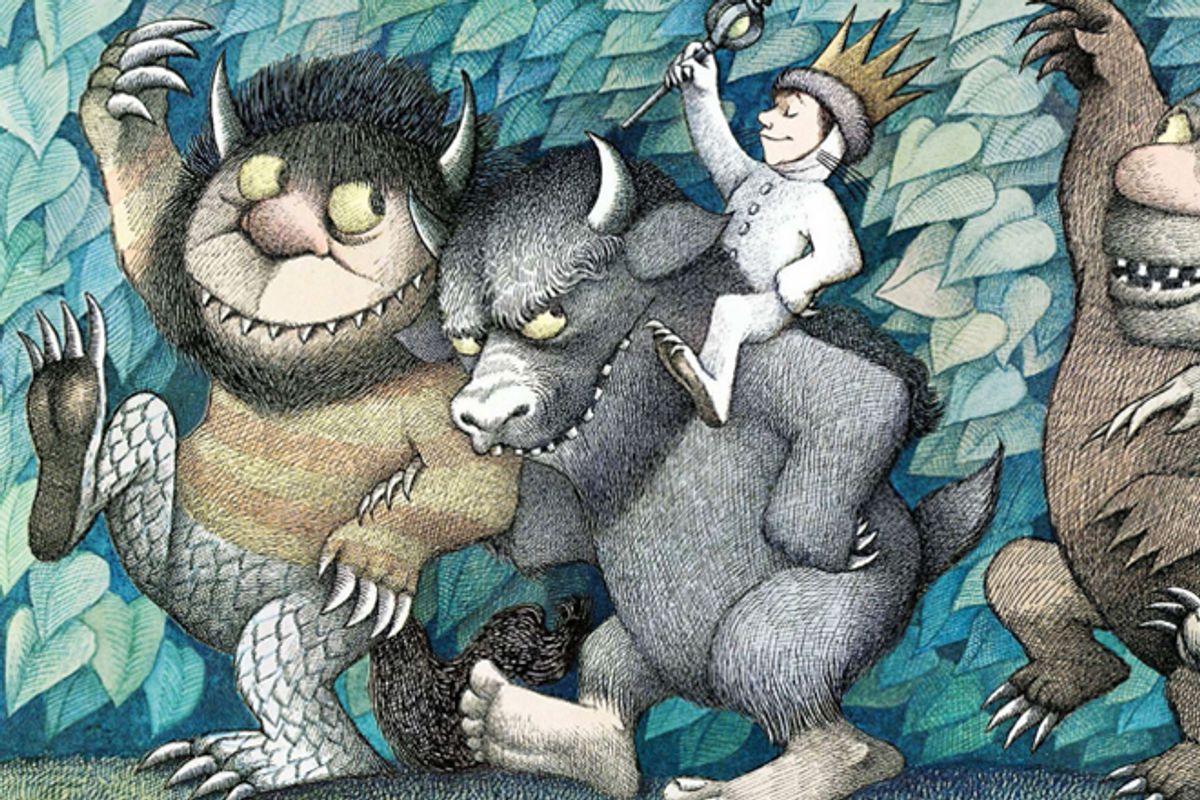 "Where the Wild Things Are" was published in 1963, just one year after I was born. This, I am sure, was no accident. I have always been up for a wild rumpus.

Which doesn't make me particularly special. The 1960s, as "Mad Men" takes pains to remind us with each new episode, was a decade-long wild rumpus. If you didn't seize every chance to ride piggy-back on half-menacing, half-jubilant dancing monsters you were ignoring the lesson of the age, something manifestly perceivable even to those of us who wouldn't hit puberty until the '70s. If it seems silly now that librarians used to draw diapers across the baby Max who starred in "In the Night Kitchen" -- well, we can blame some combination of Sendak and the '60s for our more refined modern sensibilities. As my mother, a neuroscientist, read "Where the Wild Things Are" to me, new synaptic connections spread like a grass fire in my brain. From Sendak to "Helter Skelter," in one easy swoop.

It was a lesson we never let go of. As Margalit Fox's superb New York Times obituary for Maurice Sendak notes, his "books were essential ingredients of childhood for the generation born after 1960 or thereabouts, and in turn for their children."

That would be me. And my children.

As they were read unto me, I read unto them -- each line reading with the intonation and emphasis passed down intact from parent to child -- "And it was still hot!" It's very simple: If the parent likes the book, or even better, liked the book as a child, then the child will receive a more vivacious reading of the text, which in turn impels the child to clamor to hear the treasured work read over and over again. Maurice Sendak planted an immortal virus in the culture, a self-fulfilling prophecy of rumpus, an affirmation that the child's-eye view of the world made total sense. I thank him dearly for it.

Eighty-three is not a bad age at which to pass away, and while I feel regret at how the world is made less by his absence, my real sense of sadness after hearing the news of Sendak's death came from the memories welling up of reading his works to my children.

My kids are too big now to fit alongside their father in the easy chair in which we conducted our pre-bedtime reading rituals. The easy chair itself has departed. Now we crack jokes while watching "Community" from the living room couch, their long arms and legs spread akimbo in every direction. Sure, we made a point of seeing the movie together, and agreed it was faithful to the original spirit, but it only served to evoke the spirit of those readings; it did not duplicate the experience.

In mere months, one child will be off to college, while the other increasingly exchanges incomprehensible YouTube in-jokes with his peers. Meanwhile, "Where the Wild Things Are" gathers dust on the bookshelf, safe from the culling that sent so many lesser works to the library or Goodwill (so long, "Magic Schoolbus"! Adios, Berenstein Bears!), but still a relic now of a childhood gone.

On Facebook, a friend of my sister's recalled that when her mother read "Where the Wild Things Are" she would always sing the tequila song during the wild rumpus scene, "and I argued with her every time that this was not actually in the book."

I felt another twinge. The anecdote struck a chord with me (and not just because tequila has been my rumpus-stimulant-of-choice for decades). That kind of mock argument between parent and child -- where the parent is purposely provoking the child into a rote reaction -- is an exercise in call-and-response harmony that binds the family tighter, just as did the ritual of reading and rereading the classic texts. We're more sophisticated now, the jokes and arguments are more layered and complex, the call-and-response has lost its childlike simplicity. I even felt regret -- why didn't I sing "Tequila!" when I had the chance? What a missed opportunity!

I suspect (hope) that if Sendak, who didn't seem like the kind of guy who suffered fools easily, was still around, he would scoff at all the nostalgia. There is, after all, always another generation of fresh young minds ready to be seduced by dreams of airplanes made of bread dough and kingly dominion over ominous beasts.

Guess the only thing left to do is get me some grandchildren, and propagate the virus some more. This time I'll sing Tequila! Sendak might be gone, but "Where the Wild Things Are" will never leave us. I look forward to reading it a few more times.

R.i.p. Where The Wild Things Are