The chance Democrats are taking

Has the party’s desire for unity given a flawed candidate a free pass in the race to take on Scott Walker? 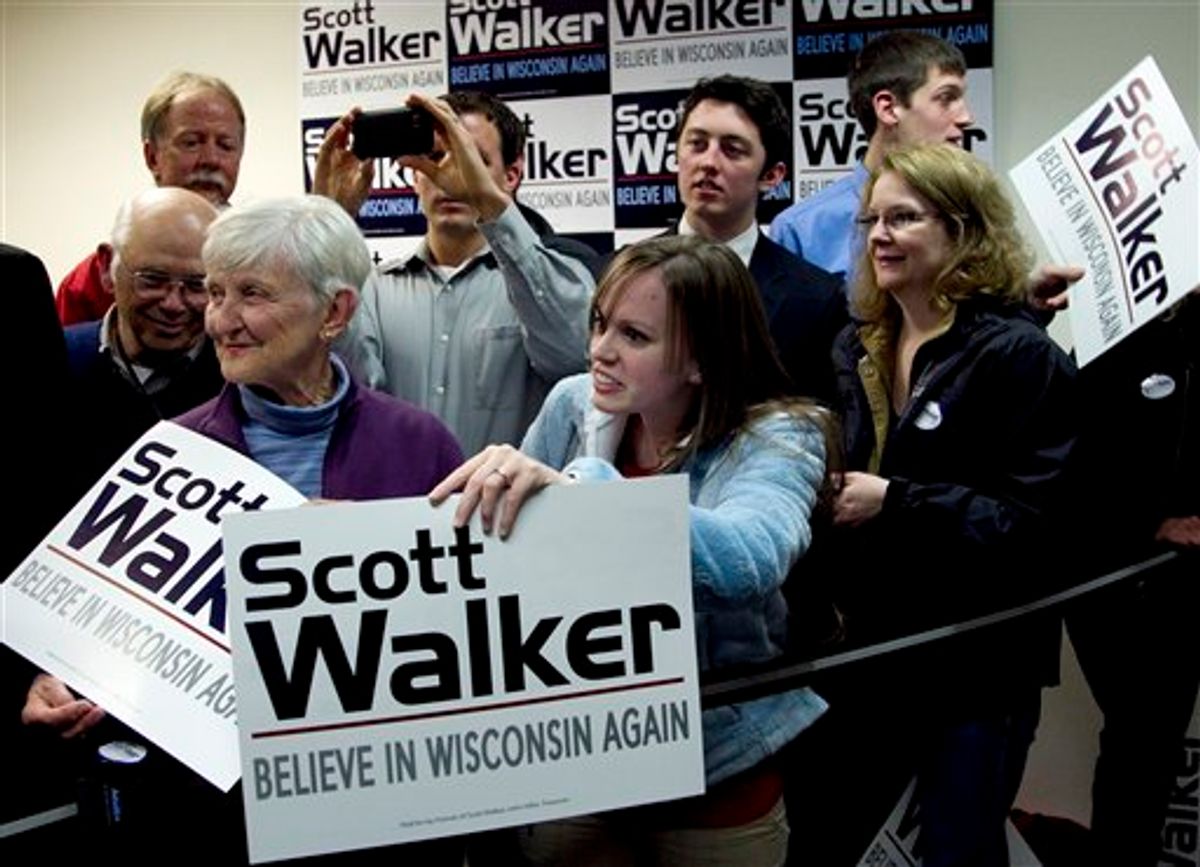 Supporters of Wisconsin Republican Gov. Scott Walker display placards during a visit by Republican presidential candidate, former Massachusetts Gov. Mitt Romney, not shown, during a campaign stop in Fitchburg, Wis., Saturday, March 31, 2012. The phone bank is used in support of Walker who is facing a recall election in June 2012. (AP Photo/Steven Senne) (AP)
--

Tonight we will learn which Democrat will oppose Scott Walker in Wisconsin’s June 5 recall election. There’s some suspense, since there’s never been an election like this in the state before, but it will nonetheless be a big upset if Tom Barrett isn’t the party’s choice.

The Milwaukee mayor, who fell five points short against Walker in the 2010 election, is supported by most of Wisconsin’s big-name Democrats and has led in every poll conducted since he entered the race. The most recent survey actually shows his advantage over his chief rival, former Dane County Executive Kathleen Falk, expanding to 17 points.

For Democrats, the promise of Barrett’s candidacy is that his pleasant manner and lack of sharp ideological edges will make it difficult for Walker to turn the tables and transform the June 5 vote into a referendum on the Democratic Party and its nominee. That Barrett is generally seen as more moderate than Falk and that he’s run without the support of Wisconsin’s most powerful labor unions could also make it tougher for Walker – who is armed with record-shattering financial resources – to attack him as an ideologue beholden to special interests.

He is, in other words, a logical vehicle for a party that wants the general election to be all about the incumbent, and nothing else, which pretty much explains why Barrett leads the endorsement game. This insider consensus may well be right, and Barrett – if he does secure the nomination today – might very go on to knock off Walker next month.

But Wisconsin Democrats could be taking more of a chance here than they appreciate. The basic problem: Barrett has some potentially significant general election liabilities, but because of the unique circumstances of this year’s race, they haven’t been explored and tested during the primary campaign.

This is a result of the immense pressure that Democratic leaders and activists placed on both candidates to shy away from aggressive attacks that might create lingering divisions within the party and to focus their fire on Walker and the GOP agenda. Functionally, this pressure has constrained Falk more than Barrett, since she’s been running from behind; front-runners like Barrett generally have no problem with all-positive campaigns.

The main issue with Barrett’s candidacy is that he actually utilized the collective bargaining reforms that Walker and the GOP enacted – reforms that were passed under ferocious Democratic objections and that triggered the recall effort – to impose concessions on his city’s employees last summer. This, obviously, will become a prime pro-Walker talking point if Barrett is the Democratic nominee. In fact, it already is. As the conservative Weekly Standard wrote a few weeks ago:

Barrett has a response ready. State aid to Milwaukee was radically slashed by Walker and his GOP allies, his camp is quick to note, and with no way to make up for it with property tax revenue he was forced to choose between mass layoffs and employing Walker’s law. It’s a choice that no municipal leader should have to make, the line goes, and Barrett has publicly committed himself to repealing the ban on collective bargaining.

Will this pass the sniff test with voters? Or will it bolster Walker’s claim that his actions have been vital to the state’s fiscal health – and aren’t part of a radical ideological agenda, as Democrats charge? The answer is far from clear, and the primary campaign is a big reason why.

Under ordinary circumstances, Falk and her allies would have loudly raised the issue, in campaign literature, television ads, speeches, debates, and interviews. But this is no ordinary campaign. Among Democratic leaders, there is hyperawareness of the challenges involved in beating Walker – and absolutely no appetite for a civil war. Under these circumstances, Falk risked inciting a loud and damaging backlash from neutral Democrats if she launched a direct attack on Barrett.

Apparently, that risk was too much for her. A few weeks ago, she debuted an ad that drew a clear but still unspoken contrast with Barrett over collective bargaining. It was supposed to mark the start of a stepped-up attack on the front-runner, one aimed at closing the gap and pushing Falk over the top in the race’s closing days. But Barrett’s backers warned her off by playing the party unity card, and nothing much came of it. Falk’s home stretch ads have been positive, as have the spots bankrolled by her labor allies. Nor did she go after Barrett in the final debate of the campaign, held last Friday night.

So it’s not surprising that Barrett has maintained his lead and seems poised to win today. Again, this may not end up mattering in June; Barrett may prove to be a perfectly fine candidate. But the knock on him, besides the collective bargaining issue, is that he’s just too nice a guy and too laid back and that he might get pushed around too easily by Walker and his crew. That concern has not been allayed by his race against Falk.