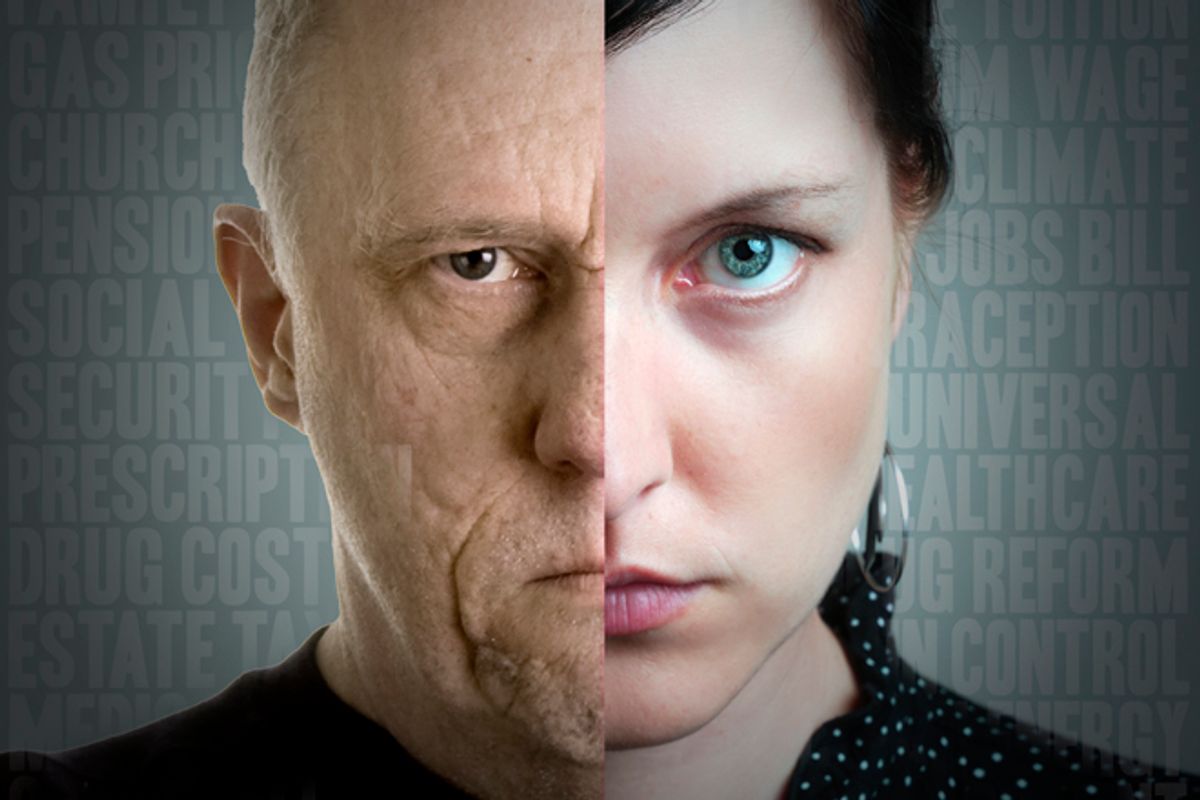 Does Mitt Romney have a prayer with young voters? As the media help him shake his Etch-A-Sketch and reposition himself for the general election, along comes a poll Republicans claim shows danger for President Obama and opportunity for Romney in one of the White House's prized electoral targets, the youth vote.

A new survey by Harvard's Institute of Politics shows that voters 18-24 are less engaged in this election than that age group was in 2008, with only 64 percent registered to vote, as opposed to 73 percent four years ago. Where two-thirds said they'd definitely vote in 2008, less than half say that today. "The president’s support among young voters is bleeding away," Republican strategist Mark McKinnon claimed in the Daily Beast, using IOP data. When McKinnon hyped his piece Monday on MSNBC's "Morning Joe," Republican Joe Scarborough intoned that "the bull's-eye is really on the back of the young voters," who know that the "burden" of Social Security, Medicare and "the $17 trillion debt will fall on them."

As a matter of fact, the Institute of Politics youth-vote study actually contained mostly good news for Democrats. (This is typical in the media, in which "Bad news for Dems" stories can be found everywhere, even in data that aren't bad news for Dems.) "Over the last several months, we have seen more of the Millennial vote begin to solidify around President Obama and Democrats in Congress," Harvard Institute of Politics director Trey Grayson observed in the press release announcing the survey results. In fact, Obama's lead over Romney increased to a 17-point margin, up from an 11-point lead in an IOP poll last November. It's true that young-voter enthusiasm is down somewhat, and Obama doesn't enjoy the 2-1 lead he built over Sen. John McCain in 2008 – but there's still time.

Of course, Republicans will insist that's time for them to make a move on the youth vote. On the campaign trail, Romney himself has taken to insisting "young people are questioning the support they gave to President Obama three and a half years ago." On Tuesday he's visiting Lansing Community College in Michigan to make his pitch. In a recent speech he said:

When you look at fifty percent of the kids coming out of college today can’t find a job or can’t find a job which is consistent with their skills, how in the world can you be supporting a president that’s led to that kind of an economy? […] He promised a future with good jobs and good opportunity; that hasn’t happened. And the pathway that he pursued is one which has not worked. Young people recognize that and I think that’s why they’re going to increasingly look for a different approach.

The toxic but illogical politics of pitting young against old was on dizzying display in Esquire's deeply messed up "The War Against Youth" feature last month, which argued that the last 30 years have witnessed a massive income transfer from young to old, courtesy of greedy baby boomers and both parties.  "The old are eating the young at the dinner table," author Stephen Marche memorably wrote. Ick. His piece started out with an economic blooper so egregious that the rest of its reporting is suspect – confusing "wealth" with "income" when comparing young vs. old, then and now. But some of the points he made were valid.  We are spending far more on seniors than we are on young people – and it's going to get worse as the boomers age.

I'm one of those late boomers who could be hung out to dry by "entitlement reform." Even the "zombie-eyed granny starver" Paul Ryan (I love Charles Pierce) says he won't touch Medicare for the over-55 set, but everyone born after 1957 gets only "premium support," casting us into the rapacious private market (but capping that premium support to make sure we can't afford decent insurance).  Hey, in a bleak, zero-sum world, maybe that's fair. I grew up at what turned out to be the dreamiest moment of the American dream; I was part of the last generation of young people to whom the nation kept its promises. Maybe it's fitting that it will break its promises to me when I'm old.

But if we screw the (soon to be) old, we screw the young too, just in a different way. And I think young people know that.

Some of the numbers that make me angriest on behalf of the younger generation have to do with college education. That's because they're so concrete to me. I graduated in 1980; from 1980 on, the inflation-adjusted price of attending a four-year college has risen by 128 percent, and according to the New York Times, the cost of public universities has tripled. When I left the University of Wisconsin-Madison in 1980, I was paying around $800 a year in tuition; now undergrads there pay $10,800. "The increase in the tuition burden is largely caused by declining state support for higher education in the past three decades," says a Times editorial on paying higher ed costs.

That's why I'm glad Obama is fighting to keep subsidized Stafford loan interest rates at 3.4 percent – but I don't think that's nearly enough. From the local to the federal level, we need a massive new commitment to higher-education affordability. When I was a kid, New York's city universities used to be free; so was the University of California before Ronald Reagan (there were fees, but no tuition). Public universities are part of the way we built the American middle class (unionized jobs were another key way). Why are we surprised the middle class is shrinking?

More than 53 percent of people under 25 with bachelor's degrees were either unemployed or underemployed; in 2000, the share was at a low of 41 percent. Meanwhile, as the ranks of  "discouraged" workers grows every month, the share of working people over 55 is at a 42-year high. But the employed share of folks 25-54 has dropped 5.5 percentage points since 2001, to 75.8 percent.

Do we think that over-55 share is growing because old folks are greedy (the over-70 share is growing particularly fast)? Or is it at least partly because 401Ks replaced pensions and then lost much of their value in the 2008 crash? Anyway, blaming the boomers, particularly the late-boomers, ignores the way the rules of the economy changed while they were in mid-adulthood. "Only 58 percent of boomers have more than $25,000 put aside for retirement, so the rest will either starve or the government will have to pay for them," Marche fulminates, as he calls Social Security "the biggest boondoggle of all." Marche assumes the selfish boomers squandered their earnings, rather than that their wages stopped rising while costs did not.

Marche's piece is a particularly vivid attempt to turn the class war into a generational war. Just take this passage:

This bleeding up of the national wealth is no accounting glitch, no anomalous negative bounce from the recent unemployment and mortgage crises, but rather the predictable outcome of thirty years of economic and social policy that has been rigged to serve the comfort and largesse of the old at the expense of the young.

Substitute "wealthy" for "old" and "middle and working classes" for young, and you've got what really happened. Republicans have a huge incentive for people to get it wrong. The funniest rebuttal to Marche's dumb piece came from Connor Fitzpatrick writing in The eXiled -- funniest because Fitzpatrick actually wrote a similar anti-boomer diatribe but from the left.

I hate to say it because after all Boomer-hatin’ really is fun and slightly cheerier than regular down-in-the-mouth anti-capitalism, but Marche’s “The War Against Youth” validates every hostility the no-bullshit Left holds towards anything that smacks of generational politics. And it shows you just why you gotta be careful before you take aim at the gray-hairs...

As much fun as it is to kick around the Boomers, we gotta move past it. Generational politics is a dead-end. Fuck it, someone slap the shit out of me if I ever say the word “Millennial’ after this. Because once we’ve set up this economic collapse as nothing more than generational warfare, we’re already lost–we’ve created a narrative which the wealthy can easily co-opt and spin for their own fiendish ends.

I'm thinking about the old-young dynamic a lot at least partly because my daughter graduates from college this month – and she's part of the lucky minority who has a job, a modestly paid, socially important, true-to-her-values job that makes me prouder of her than of anything I've done myself, to be honest. I talk it; she walks it. But I think most people are like me – they have kids or nieces or nephews or grandchildren that mean more to them than anything else, and they are not interested in supporting social policy that beggars the younger generation to keep themselves comfortable. I think most "kids" are like my daughter – they don't support efforts to make life worse for their parents and grandparents and aunts and uncles.  Ross Douthat's assertion that "brown and beige" kids won't want to support majority-white seniors ignored the fact that their own "brown and beige" parents will likewise rely on Social Security and Medicare. Plus, there's evidence that the younger generation, of every race, is less susceptible to racial-resentment appeals than their elders, anyway.

Of course, the party that's determined to cut Social Security and Medicare is even more determined to slash programs for young people.  To avoid the automatic defense cuts promised by the debt-ceiling deal last August, the House budget cuts Pell Grants and child nutrition programs, even the refundable child tax credit, for God's sake. Mitt  ("borrow college tuition from your parents") Romney is probably not the best standard-bearer for a Republican Party that wants to win the youth vote, anyway.

So Obama is likely to win this false battle. The young become old; the old for the most part have young people they love; the tribalism that's divided us racially and ethnically probably can't work this way; we're genetically programmed to reject it.

But the Democrats have to do more to earn the youth vote than keep the interest rate on one category of student loan from doubling.  Social Security and Medicare will be strained by retiring boomers, but they're going to be even more threatened by a labor market that's producing too many low-wage jobs and leaving out young people.  I trust young people to realize we're all in this together; I'm hoping more of the "keep the government out of my Medicare" crowd wakes up to that reality, before it's too late for all of us.

*Lucy McKeon and Katie Ryder helped with research for this article.