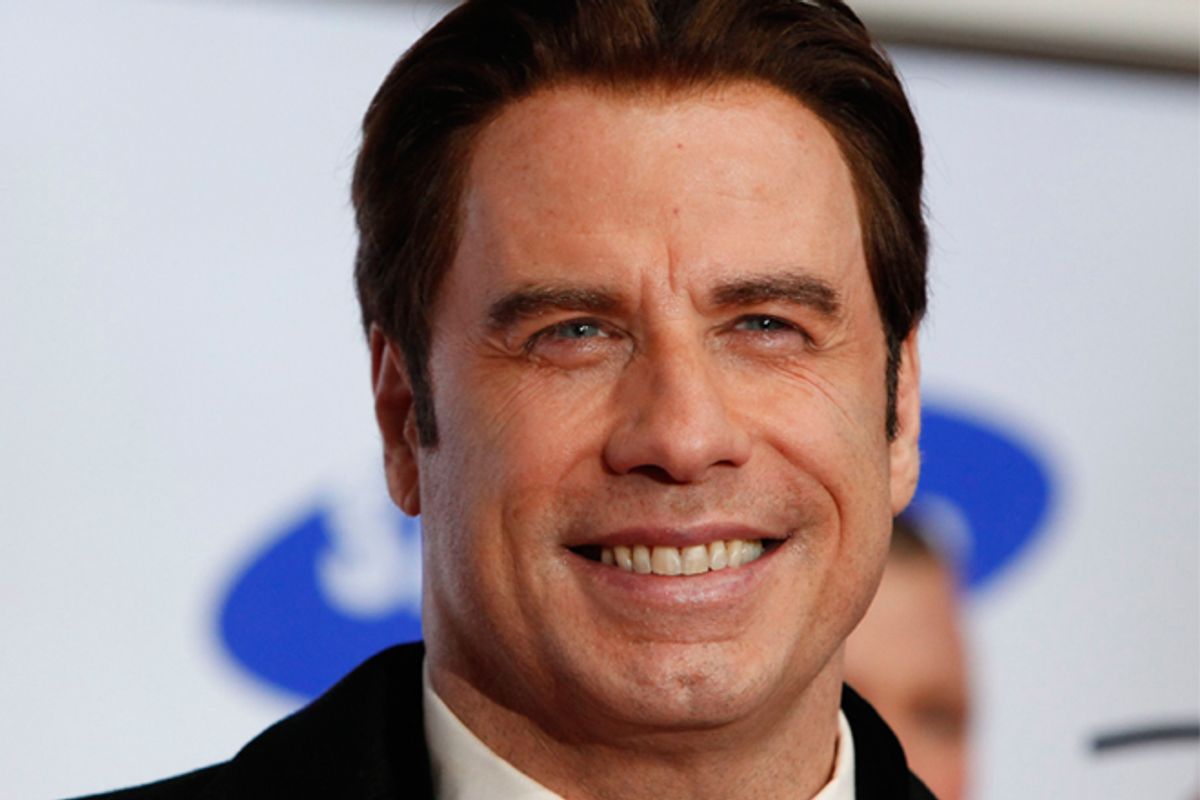 On the spectrum of Hollywood bombshells, the news Monday that John Travolta has been slapped with a lawsuit involving an alleged gay sexual overture ranks about as shocking as Lindsay Lohan getting picked up for violating parole. Whether or not the allegations can be proven true, the suit is just the most public acknowledgment of rumors that have floated around Travolta for years. So persistent and pervasive are the stories about his proclivities that back in 2009, Carrie Fisher famously boasted that "We don’t really care that John Travolta is gay." But it turns out the most surprising thing about the whole dust-up is how fantastic a document the lawsuit itself is.

In the $2 million suit, an unnamed massage therapist alleges that back in January, he was summoned by the actor to a bungalow at a Beverly Hills hotel. The Plaintiff says Travolta attempted to touch him, touched himself and when the plaintiff made it clear the massage was not the happy ending variety, became verbally abusive. Travolta has already shot back with a countersuit and a statement, via his representative, that "None of the events claimed in the suit ever occurred. The Plaintiff, who refuses to give their name, knows that the suit is a baseless lie. It is for that reason that the Plaintiff hasn't been identified with a name even though it is required to do so. On the date when Plaintiff claims John met him, John was not in California and it can be proved that he was on the East Coast. Plaintiff's attorney has filed this suit to try and get his 15 minutes of fame. John intends to get this case thrown out and then he will sue the attorney and Plaintiff for malicious prosecution." We may never know whether the Plaintiff, known only as "Joe Doe," is the victim of harassment or a guy trying to cash in on decades of innuendo, but one thing is certain – his lawyers write a hell of a lawsuit.

We open on the night of Jan. 16. Beverly Hills. An "unidentified male" calls the Plaintiff's cellphone and says he has a "celebrity client who [demands] full confidentiality," and directs him to a location where the client will pick him up. Plaintiff  "states that to his amazement, Defendant himself" appears, "wearing dark glasses, jeans with a very loose fitting athletic shirt and chronograph silver watch. There were Trojan condoms in the console of the vehicle, and there also appeared to be two or three wrappers from chocolate cake packages." The chocolate cake packages are a nice touch, don't you think?

The scene then moves to the hotel bungalow, where "there was an overweight black man preparing hamburgers …. From watching his skill and dexterity in food preparation, it seemed he was some sort of professional chef."

Here's where it gets interesting. The Defendant "shamelessly stripped naked in front of the Plaintiff, and the 'chef' was gazing at Plaintiff as he appeared to be semi-erect." Over the course of the massage, the client "kept purposefully sliding the towel down that covered his buttocks to reveal about half of the gluteus area." Soon, Travolta is trying to touch the Plaintiff's scrotum, and snickering "to himself like a mischievous child." When the Plaintiff refuses, Travolta allegedly offers, "Come on dude, I'll jerk you off!!!" Three exclamation points.

From this point, the narrative turns even more disturbing and pathetic. The Plaintiff claims Travolta became erratic, telling him "that Hollywood is controlled by homosexual Jewish men who expect favors in return for sexual activity. Defendant went on to say how he had done things in his past that would make most people throw up." He then allegedly says he "knew a Hollywood starlet in the building that wanted three way sex and to be double penetrated." When the Plaintiff refuses again, Travolta allegedly drops the matter and takes him back to their original meeting point, calling him "selfish" and "a loser" and paying him double the original asking price for their encounter.

It's a sad, tawdry story, one that is nothing if not vivid. It will likely come down to one person's word against another's, with little satisfying result for any of the parties. But it is also one of the most strangely written documents to come along in ages, a dark tale short of evidence but long on exclamation points and editorializing about the Defendant's "mischievous," "lumbering" behavior. As proof of anything that transpired, it may not stand up. As the most vividly written thing since "Fifty Shades of Grey," however, it's just begging to become a movie.