When Lindsay Lohan moved in

The actress turned my Venice Beach neighborhood into a media circus, but also brought us all together in a new way 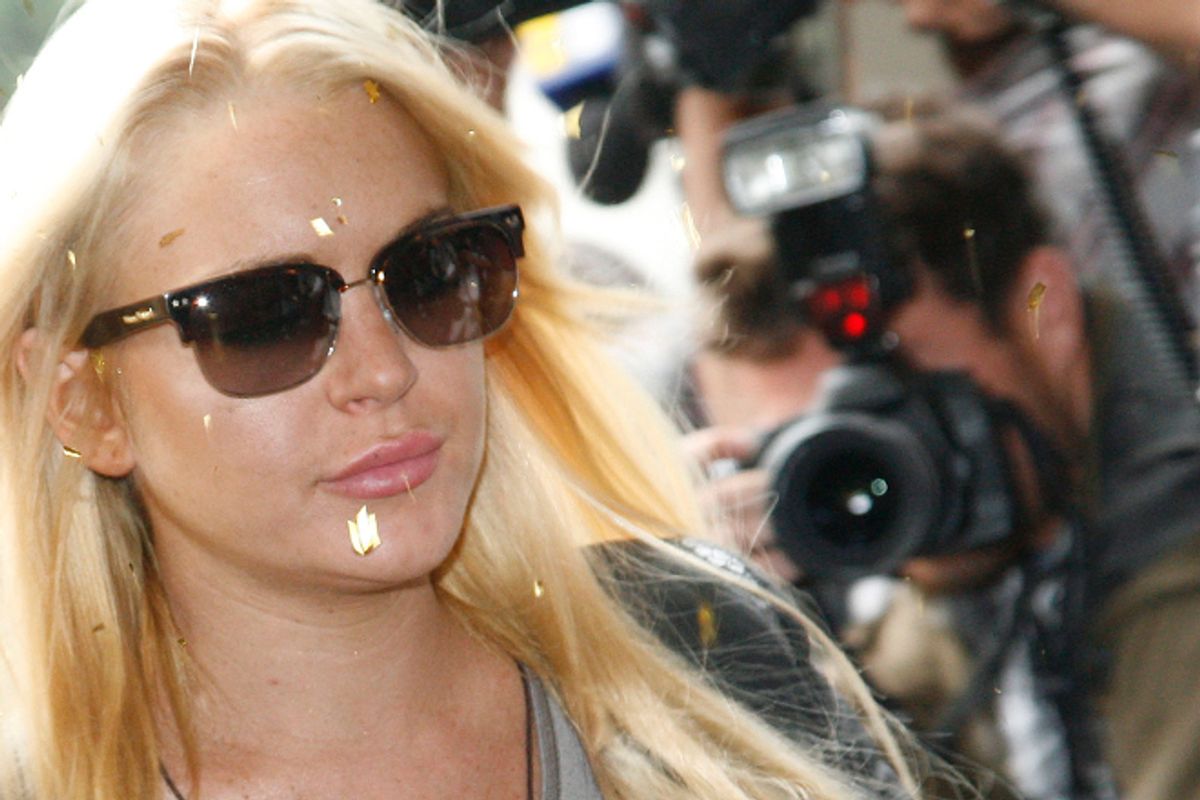 When Lindsay Lohan moved two doors down from me last year, I had briefly fantasized about some sort of feel-good neighborly encounter between us. This happened on the night when I spotted the first of many satellite vans that would defiantly park in the red zone in front of my house. The van, coupled with the all-male paparazzi contingent prowling the alley behind my garage with an abundance of video equipment, provided me with a fresh understanding of what it means to live under siege.

And so, hunkered down inside my house, I had imagined the following scenario: The actress, fleeing down the alley from these men and unable to enter her own home, would accept my offer of temporary shelter. I’d quickly usher her into my living room where I’d offer her a non-alcoholic beverage. My cats, who normally hate strangers, would allow her to pet them and she would feel inspired to reveal some shard of a more authentic self that existed beneath her celebrity train wreck veneer. She would confide her secret fears, gripes and vulnerabilities and I would nod with empathy.

My ability to just listen to her, to treat her like any other human being, would move her to tears. She would confess that she had never met anyone like me since becoming famous, someone who could just interact with her without any other agenda other than offering assistance. I would modestly dismiss this compliment yet secretly bask in a newfound sense of warm and fuzzy altruism. We would hug goodbye, and I would proceed to tell friends and family: Wow, Lindsay is so down-to-earth! The media has her wrong!

A year later, the actress has fled my neighborhood and I never once spoke to her. I never rescued her from the paparazzi hordes. I never knocked on her door bearing a homemade fruit pie. And I never found out whether discrepancies existed between the LiLo of the tabloids and the young, often harried-looking woman who darted in and out of her garage as if she were a soldier en route from the minefield to the relative safety of the barracks.

Instead, my year-long experience as the actress’ nearly next-door neighbor can be summed up in three missed opportunities for potentially friendly interaction, all of which occurred in the alley behind our houses.

Missed opportunity No. 1: While taking out my trash, I spotted her engaged in the identical task. It was a Sunday afternoon and we both had our hair in ponytails and wore sweat pants and T-shirts. Our sartorial similarities made her seem all that more approachable. Be neighborly, I told myself. Go over there and say hello! Tell her you don’t really believe she shoplifted that necklace. But before I could act, she had disappeared into her garage. After that, I only saw her assistants take out the garbage, along with the many strangers who combed through it.

Missed opportunity No. 2: Driving my car one day, I almost ran her over. She had been speed-walking down a sidewalk that intersected the alley, and I had to brake hard to avoid a collision. I raised my hand in apology, and she gave me an uninterested glance before walking onward. Up close, I could see the roots of her bleached blond hair, and she looked tired, fragile and older than her 25 years. After that, I couldn’t help feeling sorry for her despite my increasing resentment that she had transformed my street into a media circus and necessary tourist detour from the nearby Venice Beach boardwalk.

Missed opportunity No. 3: My husband and I had just wheeled our bikes outside for a morning ride and could not help noticing the actress’s black Cadillac Escalade idling in front of our garage. So we stood there with our bikes and waited until she emerged from her own garage. We pretended not to watch her get into her vehicle and she pretended that we didn’t exist.

Recently, I told my sister that I had never met my famous former neighbor. She was shocked and not because she took me for a celebrity brown-noser. Rather, she lives in a New Jersey town where to be a good neighbor means to interact with the people who live among you. “I can’t imagine not knowing my neighbors,” she said.

I, on the other hand, have lived my entire adult life in either New York City or Los Angeles, in apartment buildings and on streets where most of my neighbors remained nameless if recognizable strangers. For the most part, I’ve lived in places that bear not even the slightest traces of the era where people traded gossip over clothing lines and knew when to knock on each other's doors bearing cakes and casseroles. Today, I know much more about the lives of remote acquaintances who frequently post on Facebook than I do about the people who physically inhabit my street.

Of course, my neighbors and I knew plenty about the actress in our midst, no matter that she had installed a bamboo fence to obscure her roof deck. So when we did run into each other, we finally had a common topic of conversation to which we could collectively shake our heads and say things equal parts blasé and judgmental like: There goes the neighborhood. We could say these things with authority, because even though we couldn’t see beyond our neighbor’s bamboo fence, someone else could, since we could get online updates on the actress’ troubled life from dozens of celebrity news sites. Thanks to the actress in our midst, we now had a reason to gather on a street where privacy and anonymity generally trumped interaction. And we could mock her with impunity. Hadn’t the tabloids made it clear that she deserved it?

In truth, my fantasy of rescuing and bonding with the actress didn’t stem from a desire to be a good neighbor but from my own conflicted relationship with celebrity. As the actress’ year on my block progressed and people camped out on beach chairs hoping for Lindsay sightings, I had to ask myself whether I was any different from those interloping looky-loos I wanted off my street. Because while I might have physically avoided the actress all those months, giving her the privacy she seemed to desperately need, I also sucked up all the tabloid information on her I could in the name of wanting to know what was happening two doors down.

When meeting new people at parties, I could mention my famous neighbor and, boom, we’d have something to talk about for at least the next 10 minutes. I could feel special when friends told me they just spotted a fraction of my house in some TMZ photo that mostly depicted the side-by-side townhouses of the actress and on-again, off-again flame Samantha Ronson. My physical proximity to the actress made me interesting to other people and so I mattered in a way that could only apply in a world obsessed by celebrity and inundated by the public gossip of Internet tabloid culture.

A few months ago, I noticed the actress’ overflowing mailbox, much of its contents soggy from rain. So I did what I always did whenever I saw a crowd amass on the sidewalk in front of my house or spotted more than one news van parked across the street. I consulted TMZ and E! Online to help make sense of what I saw, and I learned, along with the rest of the world, that the actress, fed up with all the gawkers and stalkers, had evacuated Venice Beach for the Chateau Marmont.

Several days later, I watched two moving trucks cart away her belongings and observed her assistants darting in and out of her townhouse on last-ditch errands. Afterward, I went online to read more articles about the actress’s departure featuring anonymous quotes from my “rejoicing” neighbors who basically pronounced the nightmare over. The anonymous neighbors said other mean things about the actress that made me briefly resurrect my fantasy of rescuing her from peril. And then I said goodbye to the actress from a distance, in very much the same way I had not exactly welcomed her to the neighborhood.

Susan Josephs is a Los Angeles-based writer. She frequently writes about dance for the Los Angeles Times and is at work on a new play.