The president deserves credit for his actions in this civil rights area, regardless of his motives 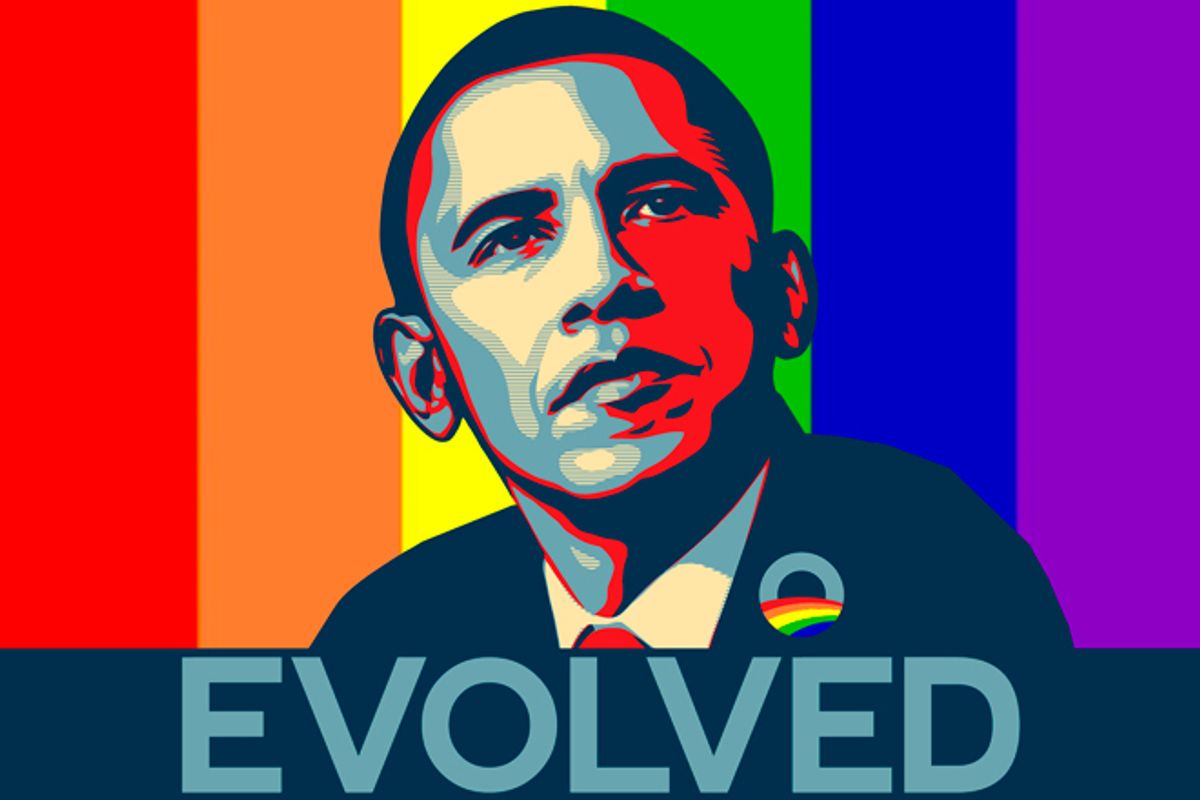 President Obama today became the first American president to endorse same-sex marriage, telling ABC News's Robin Roberts: "it is important for me to go ahead and affirm that I think same-sex couples should be able to get married." His record on LGBT equality has not been perfect, but it is one area where he has been quite impressive. He engineered the repeal of Don't Ask, Don't Tell. His Justice Department is refusing to defend the constitutionality of DOMA in court, a very unusual step. He has ushered in a series of important federal spousal benefits for gay employees of the federal government. And now, for the first time, the office of the American President is officially supporting a policy that a mere decade ago was deemed truly radical: same-sex marriage. Those are real achievements. And, as virtually all polls reflect -- underscored by last night's landslide defeat for marriage equality in North Carolina -- they carry genuine political risk. He deserves credit for his actions in this civil rights realm.

It's worth making two additional points about this. First, the pressure continuously applied on Obama by some gay groups, most gay activists, and (especially) rich gay funders undoubtedly played a significant role in all of these successes. As David Sirota explained today, this demonstrates why it is so vital to always apply critical pressure even to politicians one likes and supports, and conversely, it demonstrates why it is so foolish and irresponsible to devote oneself with uncritical, blind adoration to a politician, whether in an election year or any other time (unconditional allegiance is the surest way to render one's beliefs and agenda irrelevant). When someone who wields political power does something you dislike or disagree with, it's incumbent upon you to object, criticize, and demand a different course. Those who refuse to do so are abdicating the most basic duty of citizenship and rendering themselves impotent.

It may very well be true that Obama took this step not out of any genuine conviction, but because he perceives that high levels of enthusiasm among the Democratic base generally and gay donors specifically are necessary for his re-election, or because Biden's comments forced his hand, or any number of other tactical reasons. I don't know what his secret motives are, but even if they could be discerned, I think it's irrelevant.

When it comes to assessing a politician, what matters, at least to me, are actions, not motives. If they do the wrong thing, they should be criticized regardless of motive; conversely, if they do the right thing, they should be credited. I've had zero tolerance over the last three years for people who pop up to justify all the horrible things Obama has done by claiming that he is forced to do them out of political necessity or in cowardly deference to public opinion; that's because horrible acts don't become less horrible because they're prompted by some rational, self-interested political motive rather than conviction. That's equally true of positive acts: they don't become less commendable because they were the by-product of political pressure or self-preservation; when a politician takes the right course of action, as Obama did today, credit is merited, regardless of motive.

It should go without saying that none of this mitigates the many horrendous things Obama has done in other areas, nor does it mean he deserves re-election. But just as it's intellectually corrupted to refuse to criticize him when he deserves it, the same is true of refusing to credit him when he deserves it. Today, he deserves credit. LGBT equality is one area -- and it's an important area for millions of Americans -- where he has conducted himself commendably and deserves praise. That was true before today, but even more so now.

UPDATE: Adam Serwer complains that while endorsing same-sex marriage as a personal view, Obama insisted that it is up to the states to decide; thus, writes Serwer, "Obama has endorsed marriage equality federalism—not the notion that marriage for gays and lesbians is a fundamental right guaranteed by the Constitution that can never be taken away." He adds, correctly, that Obama has merely "adopted the same position that Vice President Dick Cheney did in 2004, when Cheney said he believed in marriage equality but that the states should be allowed to decide by a show of hands, as North Carolina did Tuesday, whether gays and lesbians have the same rights as everyone else." Gawker's John Cook voices a similar complaint.

This objection is true as far as it goes, but it does not go very far. I actually had this debate with Adam over the weekend on Twitter, as I argued that Cheney had endorsed marriage equality back in 2004 while Adam insisted that Cheney had merely advanced a states' rights argument. But Cheney back then -- like Obama today -- said that he believes same-sex couples should be able to legally marry. That's marriage equality. It may be true that each believes that it's an issue for the states to decide democratically -- which means that they believe there is no Constitutional right for same-sex couples to marry -- but ultimately, this issue is likely to be democratically decided on a state-by-state basis, and either way, since Obama isn't on the Supreme Court, his view on the constitutionality of opposite-sex-only marriage laws is far less significant than his view on whether marriage laws should include same-sex couples. That both the current Democratic President and the prior GOP Vice President are now on record favoring same-sex marriage can only help this important cause.

I'm generally no fan of Obama, and many of the reasons why are reported regularly in Glenn's blog. . . .

On this issue, Obama's statement today will be remembered 20 years from now, while his motives, and the North Carolina vote yesterday, and Biden's carefully calibrated statement last week, and Obama's previous dithering on this issue, will be long forgotten. A sitting President of the United States is willing, for the first time, to personally back basic civil rights for people who love others of the same sex. That is an action. It's mostly symbolic, sure, but it will mean a whole lot to a whole lot of people.

I'm old enough to remember eight years of Ronald Reagan not once mentioning the AIDS pandemic while it raged. Any queer or queer ally who lived through that era will instantly recognize today's significance. That was less than 25 years ago. To get from there to this is remarkable.

No, today's statement doesn't get any legislation passed (at least, not directly), and the states' rights hedge is a copout. But the important takeaway is that marriage equality opponents, and homophobes in general, can no longer dismiss gay civil rights as a fringe concern, and the notion that we can be separated from the fabric of American life and be shunned, buried, and forgotten is officially dead.

Eventually, marriage equality and all those other civil and social rights straight people take for granted will become the law of the land and the norm for everyone. Today helps get us there. That's worth celebrating no matter how many odious other things Obama's done.

As a man in his 70s, I grew up in an era when homosexuality was still an offense in some states punishable by death. The stigma of being gay drove my age-mates and me toward drink, suicide and years on the psychoanalytic couch in an effort to go straight. We were wracked with self-hatred, which blighted so many lives of our friends.

Same-sex marriage is a balm to the soul whether it’s an option that an individual embraces or not. The idea that our relationships could be normalized is such a happy sign for those of us who grew up feeling alienated from society and like second-class citizens. The battle is not yet won, but the president’s stand points the way toward success.

There's no denying that this is a significant event that moves the nation closer to equality for millions of people who have long been denied it in countless damaging ways. That's an important, and positive, step no matter what else is true about Obama and no matter what else he has done.