The conservative 100 Million Moms misfire again. Is it possible to protect kids without being a censor or prude? 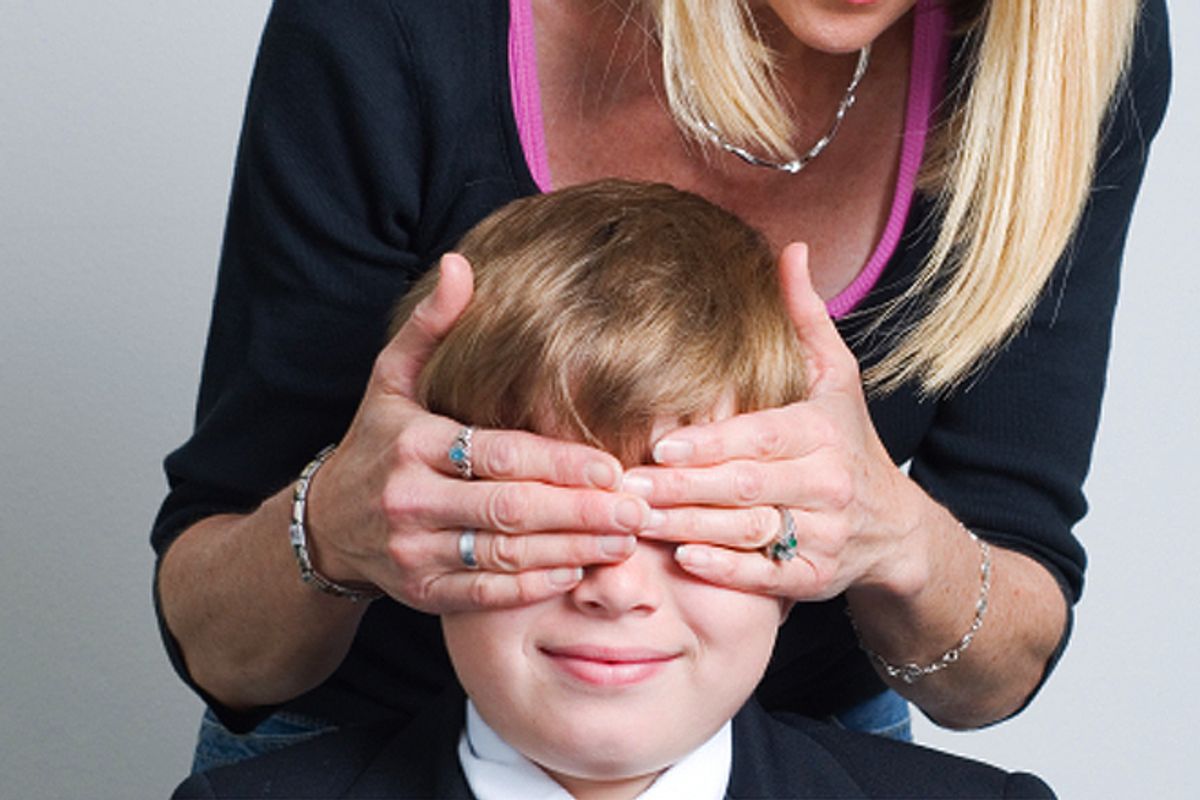 Twenty-five years after Tipper Gore and Susan Baker went on a legendary crusade against rock 'n' roll, mothers are still battling the pernicious influence of popular culture on our offspring. Back then, it was dirty Prince lyrics. Now, it's the JC Penney catalog. Oh, how the so-called culture wars have changed.

Last week, the conservative Christian group One Million Moms, already enraged that the retailer ignored the call to fire beloved, "open homosexual spokesperson" Ellen DeGeneres as its spokesperson, took on another quest. This time, vowing "the loss in sales from traditional families," they're taking aim at an image of a smiling same-sex married couple with their daughter in one of the retailer's ads. This, to them, somehow represents "the immorality, violence, vulgarity and profanity the entertainment media is throwing at your children." There they go again, giving moms a bad name.

"I feel a little queasy that we mothers are often left to be the guardians of culture," says Cheryl Strayed, author of "Wild" and Dear Sugar columnist for the Rumpus, "because so often mother movements have been associated with a conservative agenda." It's true. When a song is too raunchy, a sitcom too full of tampon jokes, a movie featuring real children somehow too raw for children, it's left to mothers (well, mothers and Kirk Cameron) to step forward and plead, "What about the chiiiiiiildren?"

But today's conservative mom movement isn't like its predecessors -- either in its tone or in its targets.

When Gore and Baker formed the Parents Music Resource Center, they could bring an entire industry to its knees. Say what you will about Tipper Gore, she knew how to run a successful campaign. (Neither Gore nor the American Family Association, which oversees One Million Moms, responded to Salon's interview requests for this story.) For starters, in stark contrast to the likes of One Million Moms, the PMRC sold itself as being far more mainstream. It didn't overambitiously attempt to take on all of culture, instead confining itself strictly to the music industry. And -- significantly – it insisted it didn't want to change artistic expression, but merely flag inappropriate content with a warning sticker so parents could make informed choices. Though the chilling effect the PMRC's warnings had on retailers and MTV makes Gore's insistence that she was "a strong believer of the First Amendment" debatable, her manner was velvet gloved. And at a time long before digital editing would make it a snap to roll out the radio and explicit version of any song, the PMRC made its tools of parental intercession seem a reasonable necessity.

The PMRC also had something else going for it that few other organizations have ever had. It was run by the wives of a senator and the secretary of the treasury. As Rob Tannenbaum, co-author of "I Want My MTV: The Uncensored Story of the Music Video Revolution," explains, "These were not just mothers. These were power brokers who had privileged access to the ear of the U.S. government because they had privileged access to the penises of the U.S. government."

Despite achieving its goals, however, the PMRC set the bar for how despised a mom-led campaign could be. Tipper Gore gave rock 'n' roll one of its most enduring nemeses, and she endures as the inspiration for Catherine Zeta-Jones' pearl-clutching activist in next month's "Rock of Ages." And it left a permanent bad taste in America's mouth about what happens when moms get their collective knickers in a twist.

Two and a half decades later, some mothers, like the 46,628 members of One Million Moms, have drawn a curious lesson from the era: that all of popular culture represents a bullet aimed at their children that they must constantly throw themselves in front of. But others, the same girls who weren't going to let some dumb sticker stand between them and a masturbatory Cyndi Lauper lyric, are moms themselves. Now we're the ones figuring out how to navigate the often muddy, expletive-laced waters of popular culture when you're not a conservative hysteric.  As Cheryl Strayed says, "I remember I used to say, 'Oh for God's sake, kids are going to listen to whatever they want." Then she found herself asking her Facebook friends for suggestions for age-appropriate hip-hop for her 6- and 8-year-old children. "I said, 'Suddenly, I'm Tipper Gore.'"

She says, "I am preventing my kids from being exposed to certain kinds of music, but I don't think that’s about art or censorship. It's a two-way conversation. A lot of times there's a line, and we'll talk about it together. I don't think it works to just create a taboo." After all, childhood isn't all Barney singalongs. Strayed recalls that when her children read "Pinocchio" when they were younger, they were "riveted and curious" about it. "They were aware there is a darkness out there, and they were ready to know about it." So why wouldn't her son be equipped now to play a video game and tell her, "Mom, I know I'm not supposed to kill people"? Somewhere out there on the line we parents struggle to stay on the right side of in the music and movies and games we give our kids, there's the safe outlet they need to explore their own complicated feelings and questions. And often, there's the stuff that we, too, treasure.

Peggy Orenstein, author of "Cinderella Ate My Daughter," says, "You have a million things coming at you all the time that you're trying to sift through -- for yourself and your child. That’s part of living in this culture. You can beat yourself up all the time, or you can sometimes say, 'I really love this song,' and deal with the consequences."

That's one of the biggest challenges for many of us. It's not finessing, as Tipper Gore called her 1987 book, "Raising PG Kids in an X-Rated Society." As Rob Tannenbaum says, "The only way you can raise PG kids in an X-rated society is by putting them in a cave." The hard part is often dealing with the fact that parents are not always directly in opposition to the popular culture, that we're often R-rated people ourselves. My 8- and 12-year-old daughters don't know what "Jersey Shore" or "Grand Theft Auto" are, because those are influences I don't want them to have -- and that their parents aren't interested in. But it's also possible that my children could -- should you ever make the request -- sing you all the words to "Baby Got Back" or "Rehab." And if you're wondering where they got their obsession with Nirvana, it's not their Gen-X mother but, of all things, "The Muppets."

"You can and should limit what your children are exposed to," says Orenstein. "But the goal is not to censor your way through life. I try really hard to protect my daughter from being assaulted by negative images, but to also be a critical thinker. It's about helping children become aware of the messages that are aimed at them."

If the ongoing attention to the "mom wars" – both the genuine and highly exaggerated, mainstream-media variety – have proven anything, it's that mothers don't speak with one voice. We don't magically fall into a single ideological camp the minute we hold our babies for the first time. That's why successful contemporary campaigning  has become more loosely and narrowly structured. A Change.org petition here, a Twitter campaign there -- often largely spontaneous groups that will rally around a single issue or incident rather than attempting to take on the whole of modern society. Orenstein says, "We live in a time of protest and boycott and petition. Sometimes there are things that I celebrate about that, and sometimes, pressure is brought to bear in ways that infuriate me." It can be as positive as Spark getting the ear of Lego over its ultra-girly line of toys. Or it can be as wrongheaded -- and easily fizzled out -- as One Million Moms, who thankfully haven't been able to get much traction for their agenda against the "filth" of a lesbian couple posing happily with their daughter in a clothing catalog. Their agenda against everybody from shopping mall department stores to Disney is too broad, their "fed up" rhetoric too much the stereotype of female hysteria, to be taken seriously. Also, their Twitter presence is lame.

As parents, we have an obligation to protect our children from material that we find objectionable – because it's cruel or exploitative, or because it's simply not age-appropriate. How we define what that is differs from family to family, and even from child to child within a family. That's our job. The adult world doesn't owe it to our children to be family-friendly, to go along with the idea that because something might be objectionable to a second-grader, it therefore shouldn't exist. It especially doesn't need fellow grown-ups who hide behind their children, using them as an excuse to push out ideas or images that make us uncomfortable. As Rob Tannenbaum says, "Using children for emotional moral leverage for your own agenda is disgusting."

We have a right to speak out about images and ideas that are destructive. Yet we have a deeper imperative to teach our kids to make their own nuanced distinctions. We mothers are still the moral gatekeepers. But it's not a culture war, led by avenging troops of mothers outraged over Nicki Minaj lyrics. It's just small, shifting battles we fight every day, in our own homes, and with our own Cee Lo Green-quoting kids.