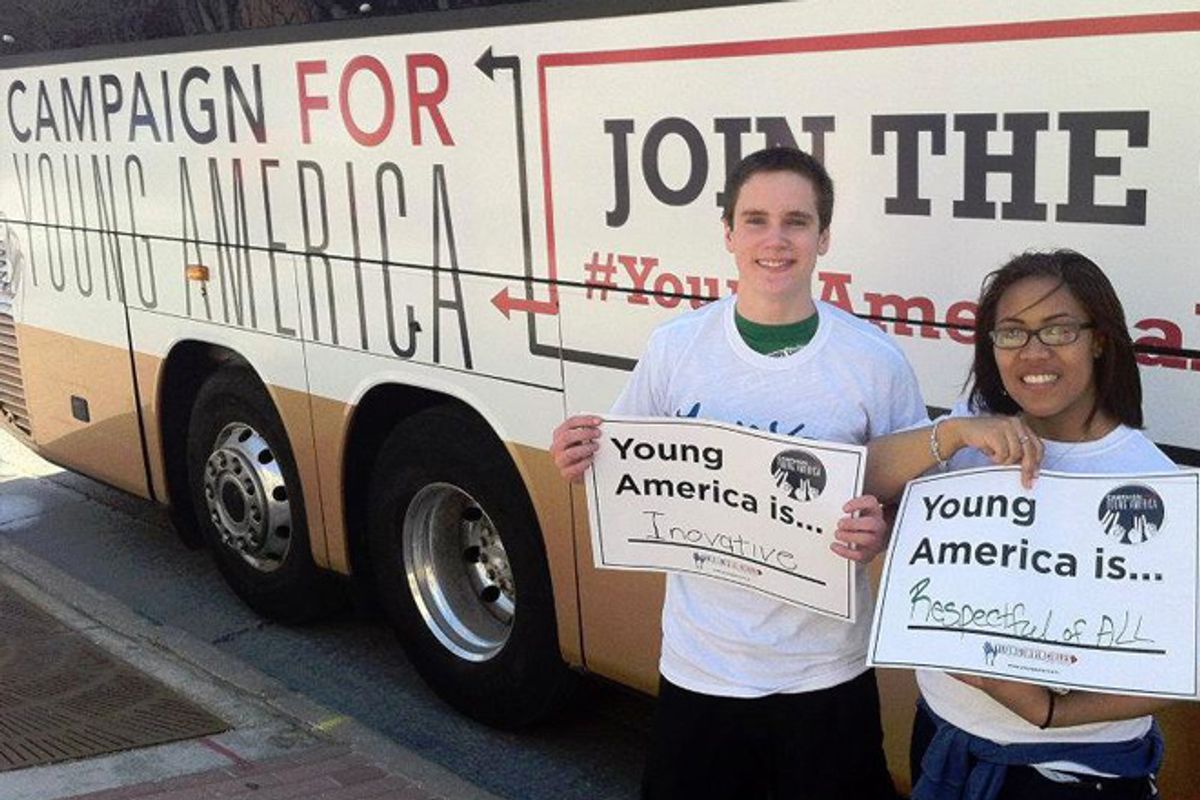 Tens of thousands of young people took to parks, streets and banks last fall to demand an end to the laissez-faire political order that permitted financial titans to bankrupt the economy and deny us a chance at finding decent jobs.

Half a year later, a collection of young people backed by major foundations and companies like Dell are promoting two new organizations, Campaign for Young America and Fix Young America. In a recent profile, the New York Times touts the groups as “advocacy groups for jobless youth” on the order of the AARP or NRA. They are, the Times claims, “younger siblings of Occupy Wall Street, but with a nonpartisan agenda, more centralized leadership and one specific mission: to help young people find jobs.”

But don't be fooled. This is Occupy as reconfigured in the subconscious of Thomas Friedman: The country's problems can be solved by promoting technological wizardry and unleashing the potential of everyone's inner risk-taker in a sink or swim economy. Think Americans Elect, for kids.

The Campaign for Young America is backed by Young Invincibles, an inside-the-Beltway organization backing the healthcare reform law and tied to a number of mainstream liberal groups. Fix Young America is a product of something called the Young Entrepreneur Council, which seeks to “help rebuild the economy” by unleashing an “entrepreneurial revolution in America.” The latter has a book of proposals out today with a vision to restore the American dream by teaching young people JavaScript; giving student loan forgiveness — if the students are “entrepreneurs who start businesses that create jobs” -- and “teaching entrepreneurship to ALL young Americans, including at-risk youth.”

This book proposes fixing the American economy and the youth jobs crisis by creating more IT start-ups: Silicon Valley to the rescue.

In other words, they are nothing at all like Occupy Wall Street: The groups have no real criticism of the American economic order, they are not democratically run, and they seem to focus on providing Monster.com-like service of helping individual people find jobs.

The book even includes a contribution from Rep. Patrick McHenry, R-N.C., the conservative legislator who last May infamously accused Elizabeth Warren of being a liar.

There is certainly a place for entrepreneurialism: Research shows that start-up cultures are important for spurring innovation in technological industries. But to think that making cheap capital available to a young entrepreneurial elite will solve youth joblessness is dead wrong, and a distraction from what should be the priority: ending budget-cutting austerity that has decimated opportunities for jobs and education.

Secondly, the idea that the jobs crisis in this country can be solved by turning everyone into an entrepreneur is just as wrongheaded as the notion that sending everyone to college will result in widespread gainful employment. For young people with crushing debt loads this can actually be a recipe for yet more risk and dislocation: The majority of new business ventures fail within five years. This may be a solution that appeals to centrist lawmakers, but it is a sorry substitute for real public investment when it comes to creating a sustainable labor market that can begin to heal the scars inflicted on recent cohorts of young adults.

Finally, it is a big mistake to think that the tech sector is a panacea for the jobs crisis. University of Michigan professor of business and sociology Gerald Davis has examined the data and found that the job-producing high-tech's potential is consistently overplayed.

“Although the handful of teen billionaires who manage to cash in on the latest app may suggest otherwise, surprisingly few people actually work in the high-visibility success stories of the tech economy,” Davis writes in an article to be presented at the American Sociological Association meeting. “The combined global workforces of Google (32,467), Apple (63,300), Facebook (3000), Microsoft (90,000), Cisco (71,825), and Amazon.com (56,200) -- 316,792 as of the end of 2011 -- are smaller than the U.S. workforce of [grocery chain] Kroger (339,000). Notably, a recent survey of college graduates under 40 found than one in five listed Google as their most preferred employer, followed by Apple and Facebook. They might as well have chosen the NBA as Facebook, given the firm’s minuscule employment, and Apple’s recent surge in net jobs is almost entirely attributable to the roll-out of its retail stores, where most of its current employees work. The Computer and Electronic Products industry has seen a loss of 750,000 jobs since 2000 as production has been almost universally offshored. But even the Information Services sector, which includes telecommunications, broadcasting, publishing and data processing, shed over one million jobs during the same period."

Fix Young America's proposals are as bold or visionary as any piece of conventional Wall Street-to-Washington wisdom.

Occupy criticizes the two-party order. These two groups, by eschewing “partisanship,” embrace the most noxious aspects of the bipartisan status quo. Fix Young America even seems to implicitly knock Occupy's political edge on its website, chiding that “only the loudest negative voices in the room are getting mainstream media attention.” Likewise, YEC founder Scott Gerber complains that “the government seems to only care about partisan politics.”

And in a fairly weird turn, the group is mounting a campaign to demand that Stephen Colbert speak publicly in favor of their “movement.” Sadly, fake and well-funded centrist social movements that promote the status quo as the answer to our nation's problems are very much en vogue in elite circles.

Indeed, both groups seem like mini-me's of Americans Elect, the “centrist” group fawned over by Thomas Friedman and funded by considerable Wall Street largess ($9 million of which went to its website), which pledged to field a “nonpartisan” presidential candidate — and miserably failed. Americans Elect, Alex Pareene wrote in Salon, is in thrall to the “common elite myth” that “Americans as a whole are crying out for 'bold,' nonpartisan political leadership, and that their strong desire for moderate, independent solutions is stifled by the two-party system.”

America's elite “moderates” are bafflingly dissatisfied with the deeply centrist Obama, terrified by Occupy Wall Street and betting that, as H.L. Mencken said, they won't lose “money by underestimating the intelligence of the great masses of the plain people.”

Banks are still making plenty of money, and young people are just plain unemployed. So last year, Fix Young America's Gerber made a pilgrimage to Wall Street — not to protest, but to be honored at a NASDAQ closing bell ceremony.

Adam Goldstein is a doctoral student at the University of California, Berkeley who studies the financialization of the American economy.