We had all the time in the world

My sabbatical offered a quiet and calm I'd always wanted. Then I discovered what a challenge that could be 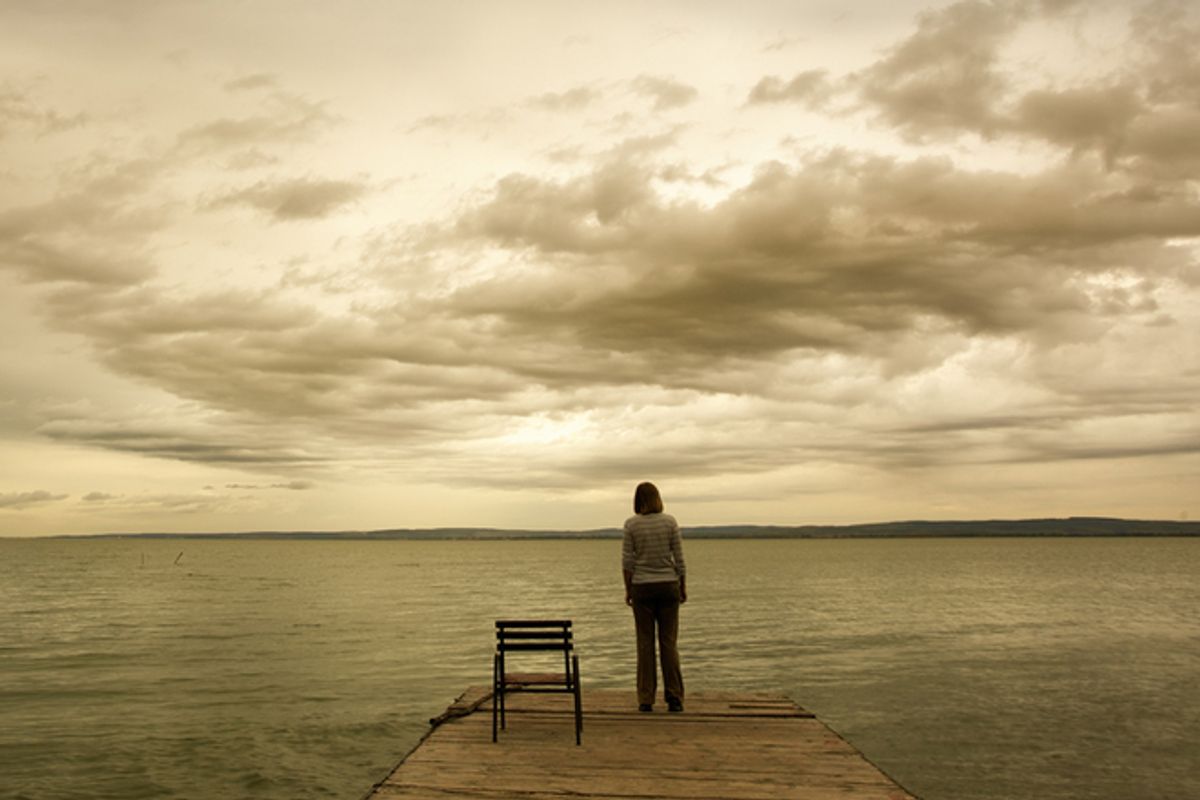 One of the enviable perks of the academic life is the funded year off that comes every seven years, and my husband and I were miraculously scheduled for sabbatical at the same time. The year fell during what was technically the second year of our “empty nest,” but it was the first time we’d be without children and day jobs. Unlike our colleagues, who head to dusty provincial church archives to research the something-something in medieval Spain, we were free to go wherever. Filled with ideas for almost every medium — play, essay, screenplay, pilot, humor pieces — I dreamed of untold productivity and an endless summer at my in-laws’ lake house in New Hampshire. I would finally have the time and quiet I’d been hungering for after 19 years of teaching and raising children.

Staying on in a summer community is like being in a department store after closing, or the zoo after dark. I wanted the place to empty out. I wanted to turn at the flashing light without waiting for the endless line of cars piling in from Boston. And yet the weekend after Labor Day, when I showed up at the flea market ready to bag the bargains that await the locals, I discovered there was no flea market after Labor Day. In high summer I bitterly complained about the busy, noisy beach where it was impossible to read undisturbed. But when I took a late September swim, it was eerie to find myself alone there. I felt like a ghost, condemned to wander the places where I was happiest.

The lake was quiet now, and we recognized the few year-round sails we saw in the distance. Taking our canoe down the Saco River, where in summer there are flotillas of canoes and beer rafts, we were now the only ones there. Arriving at Crescent Beach in Maine, where the parking lot is usually full of camp buses hugging the shade, we counted only 10 cars. By November, we were the only ones left on the lake, kayaking with hot tea in our thermoses, floating among the feathers left behind by the migrating Canadian geese. It was hard to shake the feeling that there was someplace we were supposed to be.

Without the academic calendar organizing our lives, there was a sense of unreality about where we were and what season we were in. Our life had the logic of dreams: “It was the New Hampshire house, but it wasn’t the New Hampshire house.” Brown leaves fell on the front porch, giving it an abandoned, haunted house feel – an effect heightened by our black cat, who sat on the porch railing watching the chipmunks. The weather further confounded us with a late October snowstorm (the headline in the local paper read “SNOWLIAGE!”). Watching the snow melt and the dirt roads growing muddy, it felt more like spring than autumn.

While new second homes are outfitted with every appliance, in this Cheever-y summerhouse it was considered a virtue to do without — to do without showers, dishwashers and dug wells. The water from the cistern had a bitter taste, and a washcloth left in the sink overnight would mysteriously turn blue. Whether it was the dubious water or the Dr. Bronner’s biodegradable soap, my hair was never entirely clean. Our clothing smelled like wood smoke and the cuffs of our jeans were perpetually muddy. When we went to town we were like Peruvian miners returning to daylight, blinking hard at civilization. The previously magical path to the lake became woodsy and damp and a late day swim now seemed medically ill advised. The milky sunset was moving earlier and earlier, but when we complained about the shortening days and the dark mornings, a year-rounder friend replied briskly: “What difference does it make if you don’t have to get up for work?”

The travails of a year off and the exigencies of an 18th-century summerhouse are a privileged set of problems to explore. But a sabbatical demands a kind of self-directed work that’s very different from an articulated class schedule and a proscribed roster of tutorials and department meetings. It requires a daily discipline, especially in the face of a beautiful New England fall. I careened from feeling stupid for staying indoors while the lakes and mountains beckoned, to feeling irritated that I hadn’t committed to a hard and fast writing schedule. Normally I worked on projects for someone; this year I was simply writing. There was no guarantee that anything I wrote would be produced or published and I was forced to confront the daily uncertainties of the freelancer.

I became obsessed with other writers’ schedules. I read an interview with Haruki Murakami in the New York Times Magazine in which I learned that he lived a “monkishly regimented life.” He ran or swam long distances, went to bed at 9 p.m. and woke up “without an alarm” at 4 a.m. to sit down to five to six hours of “concentrated writing.” It was implied that “concentrated writing” did not include answering emails or reading reviews and I remembered how Jonathan Franzen had famously put glue in his Internet port in order to avoid temptation.

As a professor one is perpetually needed, putting out logistical fires for the students on a daily basis, expected to respond immediately to their angsty, hormonal emails. Now when my BlackBerry blinked, it was only an email advertising a geographically irrelevant college lecture or the arrival of the new Athleta catalog. While we all fantasize about uninterrupted days, in practice there was something about the open calendar that inspired existential dread. Now when I had no students, and my two sons were both away at school, I missed the various human obstacles that used to stand between me and my writing. In the Nick Hornby book “About a Boy,” the wealthy, unemployed protagonist divides his days into 30-minute “units” to keep himself sane. How many times have you heard about the lottery winner whose life falls apart once he gives up his day job?

Writing full-time, my wardrobe was reduced to pajamas, jeans and the same red plaid flannel shirt. I’d put sneakers on to take a walk and then return to the same shearling-lined Merrell clogs. Once I discovered how little clothing I needed when I wasn’t teaching, the siren song of the nearby outlets was stilled.

In late October we moved into a winterized house that we’d planned to rent out, but our young tenants were blind-sided by medical bills, caught without health insurance after a complicated ectopic pregnancy, and moved out unexpectedly. Unsure how soon we’d be able find another renter, we decided to move into the unfurnished house ourselves.

When the snow finally flew, our world was enveloped in silence, compounded by the extra insulation of a new house. The only sounds I heard were the wood furnace kicking in or the occasional flying squirrel in the walls. This sepulchral quality was the aural equivalent of our empty nest, and the newfound quiet made it remarkably easy to concentrate. My husband painted in the heated basement while I worked long hours in the living room by the wood stove. When I looked out the window at a snowcapped Mount Washington, my heart swooned like a teenage girl spotting her crush at a party.

I often remind my playwriting students to ask the Passover question: What makes this day different from all other days? Talking to our children on the phone I struggled to answer that question myself. A writing routine requires, well, routine. When life is uneventful — when you don’t get dressed, go to work or see other people -- there are suddenly many hours in the day for writing.

As the pages stacked up, I began to see how this sabbatical thing worked, and the twinges of guilt and embarrassment I’d felt about a year off went away.  Teaching not only takes up the time that might otherwise go to writing, but the short-term ego gratification can supplant the need to write. Posterity can come to seem less important than the student in your office insisting that your class is “awesome.”

I subscribed to a website called I Done This that emailed me at 6 every evening asking me to account for my day. Replying with the list of tasks I’d accomplished opened up the larger question of what counted.  Did grocery shopping count? Laundry? Taking a walk?

I also wanted to use the year to check off a private bucket list that included reading Dickens, learning Spanish and returning to figure skating.  Middle-aged fear had supplanted my pre-pubescent skills so I took lessons at the local ice rink to recoup what I’d lost. Children were now being taught to skate by pushing milk crates around the ice so I skated among the jangling, periodic clatter of the falling stacks. I knew that Murakami or Franzen would never take time away from their writing to learn how to do a Lutz but I also knew that being a student, being bad at something, is the best way to remind yourself how to be a teacher, both because it’s humbling and because it reminds you that teaching involves breaking something down into manageable steps. How do you go from the security of skating on two feet to lifting one foot up and crossing it over the other while moving? Like writing, like everything, it’s harder than it looks.

A sabbatical too is harder than it looks. A sabbatical reminds you that humans are like working dogs. We like tasks; we like to be where we’re supposed to be at a certain time. A sabbatical also makes you confront the fact that you are replaceable. (A tone-deaf junior colleague emailed me early on to tell me what a great job my replacement was doing.) And a sabbatical forces you to articulate your definition of time well spent. If there were nothing standing between you and your writing, what would you write? And what else would you want to do? Is happiness grounded in geography? Is life about checking off bucket lists?

By the time April rolled around we knew that back in Ohio our colleagues were in the home stretch. We became nostalgic for those hooky-playing autumn days when we were floating around in kayaks with the year off stretching ahead of us. A sabbatical wasn’t quite as sweet once everyone had the summer off. Though I’m only halfway through “Bleak House,” I can still point to a respectable stack of pages written. I’m speaking some present-tense Spanish and skating with the 13-year-old divas in the center of the rink. Come August, I will have to repeatedly answer the question “How was your sabbatical?”

This essay is the long answer. The short answer will be: “It was great.”

Wendy MacLeod's plays have been produced Off-Broadway at Playwrights Horizons and at The Goodman and Steppenwolf Theaters in Chicago. Her play "The House of Yes" was made into a Miramax film. Her prose has appeared in McSweeney’s Internet Tendency, The International Herald Tribune, The Washington Post, The Rumpus, The Awl, NPR’s All Things Considered and POETRY magazine. She is the James E. Michael Playwright-in-Residence at Kenyon College. Her new play "Women in Jep" will premiere in July at the Arden Theater in Philadelphia.