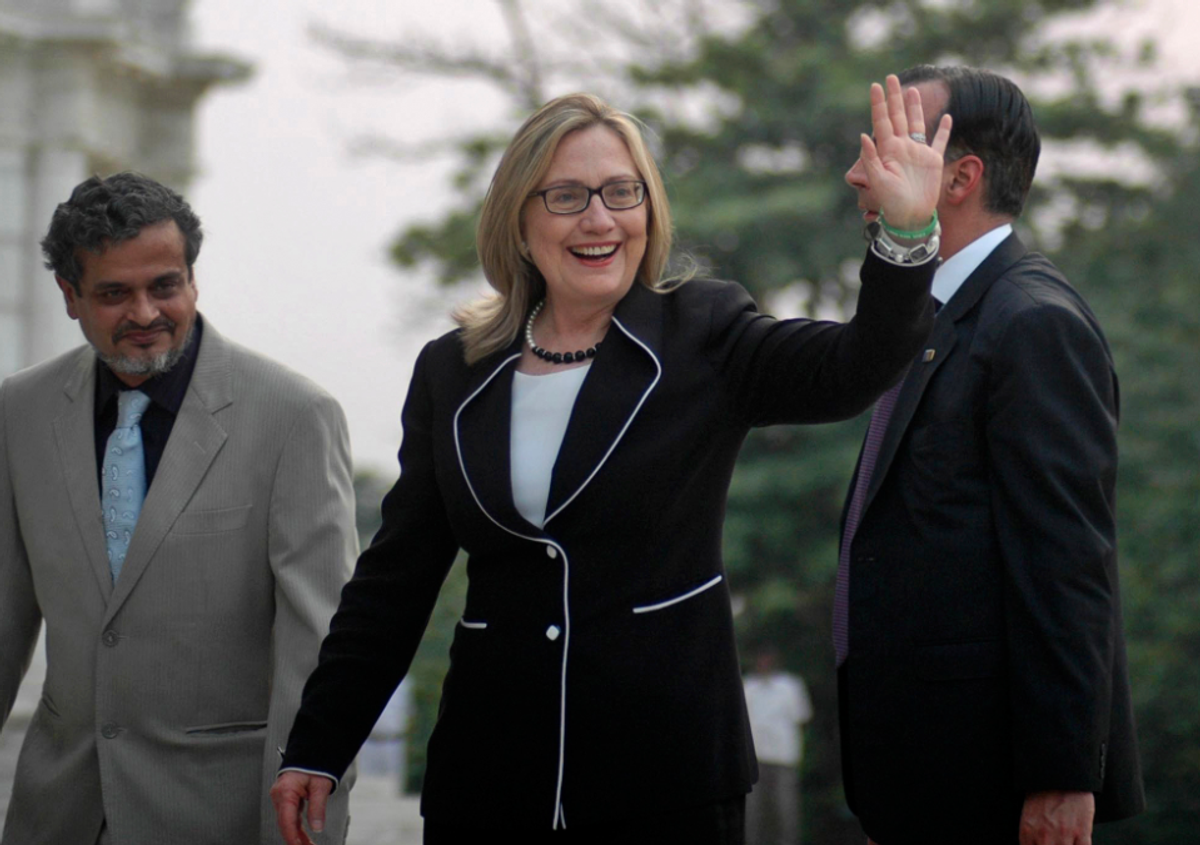 U.S. Secretary of State Hillary Rodham Clinton, waves during a visit to the Victoria Memorial Hall in Kolkata, India, Sunday, May 6, 2012. (AP Photo)
--

NEW DEHLI, India – Washington's feel-good mission to India this week was long on browbeating and short on substance, signaling that America has yet to understand its supposed strategic partner.

Landing first in Kolkata, US Secretary of State Hillary Clinton came to India with a substantive agenda. She acknowledged the importance of regional leaders to Prime Minister Manmohan Singh's coalition government by meeting with West Bengal Chief Minister Mamata Banerjee — the biggest impediment to opening India's multibrand retail sector to investments from foreign companies like Walmart — in Kolkata Monday.

Then, she moved on to meet Singh and Congress Party President Sonia Gandhi, as well as Foreign Minister SM Krishna, in New Delhi later in the week.

But whatever groundwork for cooperation Clinton might have laid in her private meetings with these leaders in advance of next month's strategic dialogue in Washington was undermined by her public speeches browbeating India on Iran and mouthing the same old platitudes on Pakistan, Indian policy experts say.

“She's overplaying her hand on Iran,” said Kanwal Sibal, former Indian foreign secretary. “Knowing the complexities in India and the political sensitivities involved, for her to publicly pressure India to reduce its oil purchases from Iran, I don't think it sits well with the larger political establishment in New Delhi. I don't think she's winning any arguments in favor of her case. On the contrary, she's causing a degree of resentment.”

From the outset, Clinton's visit was awkwardly timed. Apparently designed to encourage India to further reduce its oil imports from Iran, in compliance with US sanctions, it coincided with the visit of a trade delegation from Tehran.

“It is too difficult to tell at the moment” if she was able to establish any common ground, according to Sumit Ganguly, political science professor and Indian cultures expert at Indiana University. “Also, India may have trouble trying to reduce its dependence [on Iranian oil] too drastically.”

Other observers are pessimistic.

Despite its public rejection of US sanctions on Iranian oil, India has been quietly reducing its imports, and has negotiated a deal to make half of its purchases in Indian rupees — which Tehran can only spend on goods made in India.

Already, India's oil imports from Iran plunged 34 percent in April, as Indian refiners are expected to cut volumes from Iran by more than 20 percent this year. However, India is reluctant to rely too fully on oil from Saudi Arabia, which is a staunch supporter of Pakistan.

By using the bully pulpit to make her case (and speak over Indian heads to poll-bound Americans), Clinton may therefore have alienated a government that was already convinced and taking action, some argue.

In Kolkata, for instance, Clinton “played up” Tehran's alleged involvement in the attempted assassination of an Israeli diplomat in New Delhi this February, asserting that Iran is a terrorist state. Meanwhile, she went no further than to repeat Washington's usual formulations on Pakistan — that Islamabad “should do more” to ensure that terrorists don't use the country as a launchpad, Sibal said.

Indian and American interests converge more today than ever before. Washington would like New Delhi to become a stronger player in the region to offset some of Beijing's growing power. America's ongoing pivot toward the Pacific coincides with India's "Look East" policy aimed at broadening its trade and influence in Southeast Asia. And America's historical alliance with Pakistan is now barely limping onward as a marriage of convenience.

But that doesn't mean that the Indian and American agendas converge on every point.

In proceeding directly to India from her visit to China, for instance, Clinton underscored Washington's position that it views both countries as of equal importance. Yet amid support for India's move into Southeast Asia, the US also continues to entertain China's ambitions in India's backyard.

And whatever avowals Washington is willing to make privately about the desire to balance China with another rising power, when it comes to issues like the dispute over the borders of Kashmir and Arunachal Pradesh, America wisely retains a studied silence.

“If things turn hot with China, we can't really rely on the US to back us,” said Rajiv Sikri, a former Indian ambassador to the US. “So how can India be burning its boats with China, or Iran, or any other country? The US attitude in moments of crisis will be determined by US national interests which may or may not coincide with India's.”

In a nutshell, that's why Indian policymakers are reluctant to give up the country's historical stance of “non-alignment” and stake the country's future on a full-fledged alliance with the US.

But perhaps more importantly for Clinton's visit, for any Indian leader to publicly kowtow to American dictates in India's neighborhood — however desirable the intended outcomes may be — would be tantamount to political suicide. So while Clinton spoke as though her administration is the only one with an upcoming election to worry about, her interlocutors in India's Congress Party forged full speed ahead to push new trade agreements with Tehran across town.

It was as clear a sign as any that Washington is still somewhat in denial about the nature of this strategic partnership.

“India will never be in the kind of position that Japan or some of the other allies are,” said Sikri. “The US is not offering the kind of security umbrella to India that it does to these countries, and it never will. Nor will the Indians accept it, I think. Nor is it a feasible proposition. So for the US to expect India to accept blindly whatever the Americans say is extremely naive.”

According to Indiana University's Ganguly, India's move to boost trade ties with Iran in the midst of Clinton's visit sent a “very bad” signal in that context, suggesting that New Delhi's response to American policies will continue to be a kneejerk no to preserve a “hackneyed” idea of India's strategic autonomy.

But insiders from India's foreign policy establishment like former ambassador Sikri argue that India's “feisty” response to US pressure on Iran marked a maturation of the strategic partnership, rather than its decay.

“There is a genuine friendship with the United States, a desire for closer ties, through trade, commerce, people-to-people relationships, which makes for a very deep, across the board Indo-US partnership,” Sikri said. “Even when government-to-government relations are not the best, these sustain it. We can have a dialogue with the US that enables us to have a candid exchange of views without derailing the relationship.”