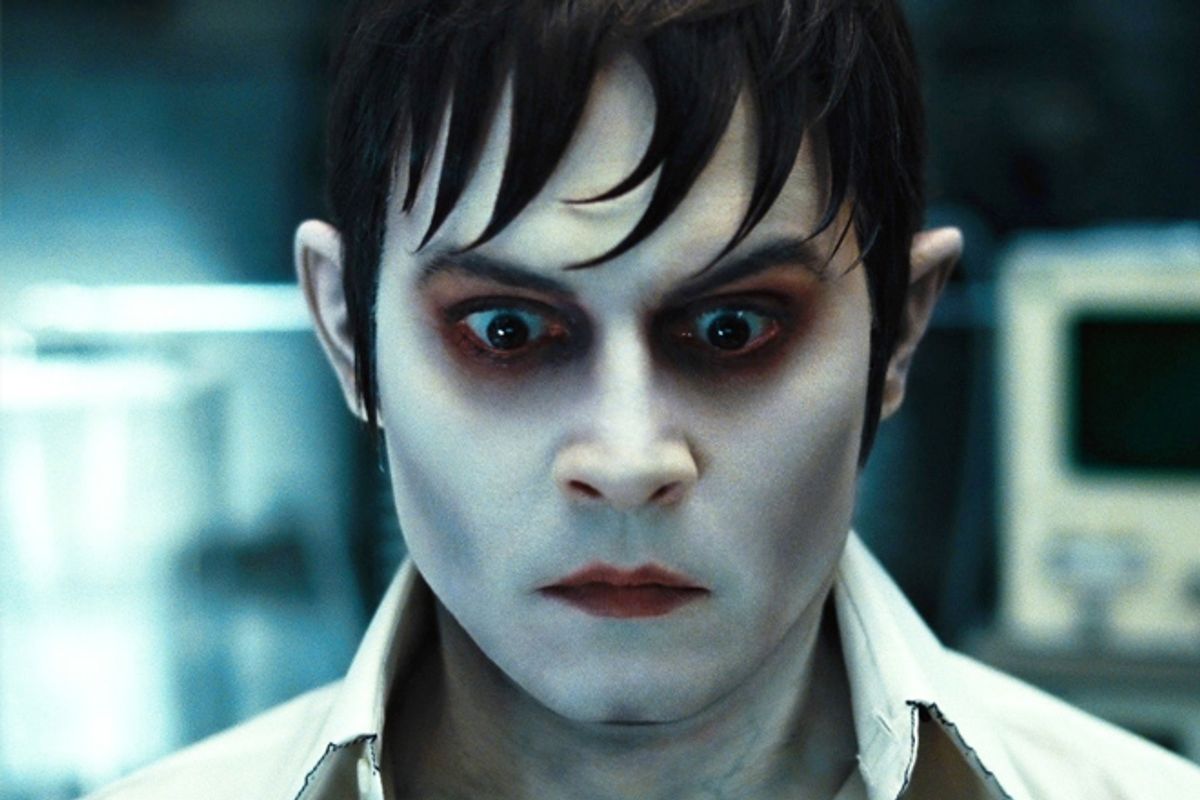 Early in Tim Burton's "Dark Shadows," Victoria Winters, the proper-looking aspiring governess played by lovely young Australian actress Bella Heathcote, arrives at the gates of Collinwood, a decaying family mansion in rural Maine. (She's gotten there by riding Amtrak, while we listen to "Nights in White Satin," which is somehow exactly right.) Vicky, whose real name is something else entirely, has always been a strange girl who sees things, and who is dramatically out of step with the pot-smoking, rock 'n' roll youth culture of today (and by today I mean 1972). A strange force has drawn her hither! Could it be the bizarre charisma of the undead monstrosity who (as we already know) lies entombed and enchained, almost beneath her feet? As the door to Collinwood creaks open revealing the idiot caretaker (Jackie Earle Haley, who is priceless), we glimpse a powerful, almost Proustian totem leaning against the front porch: A Schwinn kids' bicycle, with a banana seat. I had already suspected I was going to love "Dark Shadows," even before that moment. But that's when I knew it for sure.

There's no doubt that Burton's "Dark Shadows" has issues, and it will probably be considered a misfire in many quarters. It's so incredibly specific -- in its detailed recall of the original late-'60s "Dark Shadows" soap opera (truly one of the strangest series in television history), its finely honed hambone acting by Johnny Depp, Michelle Pfeiffer and Helena Bonham Carter, and its campy but affectionate treatment of its Nixon-era setting -- that it's hard to tell who the intended audience is. Me, evidently, along with other relics of that era and longtime "Dark Shadows" fans who've been waiting -- and waiting, and waiting -- for Barnabas Collins to be exhumed yet again, along with his lugubrious extended family. (We'll talk about the doomed 1991 series some other time, OK?) But I honestly don't know what sense it will make to people who show up because Johnny Depp and Tim Burton made a vampire comedy and that sounds cool. This "Dark Shadows" clearly leaves the sepulcher door ajar -- nay, gaping wide open -- for potential sequels. But it's such an odd movie and it's facing the triumphalist superhero tidal wave of "Avengers." Disaster is definitely possible, so I'm not holding my breath.

Anyway, here's the principal issue I see with Burton and screenwriter Seth Grahame-Smith's (he of "Pride and Prejudice and Zombies") strange blend of nostalgia, farce and spooky-loo: Total delicious goodness! Oh, sure, it all comes unglued in the final 15 minutes, when like all Hollywood movies the story devolves into CGI fight scenes and stuff blowing up. But "Dark Shadows" offers potent atmosphere and delirious '70s fashions and hilarious gags and some really terrific performances, none better than Pfeiffer's triumphant return to the screen as a pitch-perfect family matriarch. This film seems to engage Burton's attention and imagination as no movie has since -- well, a very long time ago. You can definitely make a case for his 2007 version of "Sweeney Todd," and the animated "Corpse Bride" is more enjoyable than most of Burton's live-action films, but so much of his career -- like that of Depp, his good friend and muse -- has been expended on stylish resuscitations of moribund pop-culture properties that look great but just go through the motions, storytelling-wise.

That Schwinn bike outside Collinwood is a good way of explaining the delicate balance Burton and Grahame-Smith try to strike here. This "Dark Shadows" seeks to be just as melodramatic and claustrophobic and ridiculous as Dan Curtis' original series -- which only introduced its supernatural elements out of desperation, in an effort to raise abysmal ratings -- but not exactly in the same way. Yes, the self-aware camp factor has been turned way up, and that will no doubt displease some original fans. When Depp's Barnabas, an 18th-century gentleman vampire, is first loosed from his 200-year imprisonment by a road construction crew, he marvels at the towering luminescence above him, clearly the work of Mephistopheles (the golden arches of a McDonald's). Later, upon glimpsing Karen Carpenter on TV, he is disturbed and beguiled: "What sorcery is this? Reveal yourself, tiny songstress!" Curtis' show certainly never contained internal gags of that sort, but from the audience point of view, it was a camp object even at the time; its goodness and badness and creepiness and sex appeal were always intertwined and inextricable.

If you're too young to have seen the original "Dark Shadows" -- which remained a daytime staple, in reruns, well into the 1980s, and is now available on DVD in (almost) its 1,245-episode entirety -- or just aren't wired that way, explaining its importance may not be possible. The main thing to point out is the immensely different cultural context in which the show emerged. Barnabas Collins predates not just "Twilight" and "True Blood," but also Anne Rice's "Interview With the Vampire" and the entire rise of the Goth sensibility. In the 1970s, vampires were something that only marginal weirdos who went to science-fiction bookstores and watched Hammer films like "Dracula: Prince of Darkness" knew about. People like the teenage Tim Burton, in other words. (Christopher Lee, who played Dracula in seven Hammer movies, has a cameo role here, at least his fifth performance for Burton.)

Many of us unlucky enough to be conscious during the 1970s were desperate for markers of cultural difference, and "Dark Shadows" offered a big one in the years before punk rock. If you were into that show, you probably listened to records by Alice Cooper and the Rolling Stones and the Velvet Underground. You read Tolkien, and Harlan Ellison. You also watched "Star Trek," an extremely different kind of show with some odd similarities. (Each became more popular after their cancellation; each starred a Canadian Shakespeare actor -- William Shatner and Jonathan Frid, respectively -- who took a low-paying TV gig that would define the rest of his life.) You probably knew the guy in your town who sold Acapulco Gold and Panama Red.

But I wouldn't make an argument for "Dark Shadows" purely on context and significance, and Depp and Burton don't either. Curtis' show made a virtue out of poverty, and while that might not have been entirely new in pop culture, it sure felt that way. Wobbly sets, flubbed lines and wandering stagehands became part of its live-to-video appeal (nothing was ever shot twice), but the zero-tech effects, stilted dialogue and noodly score (by Robert Cobert) were often surprisingly powerful. After Barnabas was loosed from his coffin about a year into the series, the storytelling became increasingly unhinged and improvisational -- there were werewolves, zombies, witches and time travel -- and the show's long arc featured two long detours into two different past centuries, along with parallel and contingent universes that might befuddle Stephen Hawking. It was all made up on the fly, of course, and didn't necessarily make sense, but there's no question it fired the imagination of a generation: Burton and Quentin Tarantino and Joss Whedon and J.J. Abrams and countless others.

Burton and Grahame-Smith essentially build a series of affectionate riffs on the characters and situations of the original series, and personally I can only wish there were a lot more of it. The aforementioned Vicky Winters bears an uncanny resemblance to Barnabas' long-ago lost love, Josette, who was driven to suicide by Angelique (spectral French actress Eva Green, still awaiting her moment of Hollywood stardom), the comely witch he spurned who then sought gruesome revenge. Indeed, when Barnabas returns to 1972 Collinwood and divulges his secret to the resolute Elizabeth Collins Stoddard (Pfeiffer) and then to drunken, zaftig New York psychiatrist Julia Hoffman (Bonham Carter, hilariously mimicking the mannered performance of the late Grayson Hall in the original), he soon discovers that Angelique has endured into the 20th century as well -- and, like all women, still wants him.

Is it inherently bizarre and pointless that Burton has spent millions of dollars on a studied, postmodern attempt to both emulate and parody something that was made on the cheap, and that essentially parodied itself at the moment of its creation? I dunno. If you rely on Susan Sontag's famous definitions of camp, the original "Dark Shadows" would count as naive or "Pure Camp," whereas Burton's film can only be "Camp which knows itself to be Camp," which Sontag says is less satisfying. I'm not sure these distinctions hold up, personally, and I see no moment of innocence in pop culture's past. Burton and Depp have made this film out of a pure, deep passion for something that was created 40 years ago for entirely pragmatic reasons -- a desire to keep a TV show on the air and get paid for it -- and then fed on its own nuttiness and the public's almost erotic appetite for something new. In so doing, they may have created a movie that's meant for a mass audience, but that only a few people will enjoy the way they do. (The "Cable Guy" of vampire movies, perhaps.) A mistake, and a failure? Maybe. But isn't that a wonderful twist to the tale?