Ten network shows usually open with a murder. That's 200 deaths each season. Which one was the gnarliest? 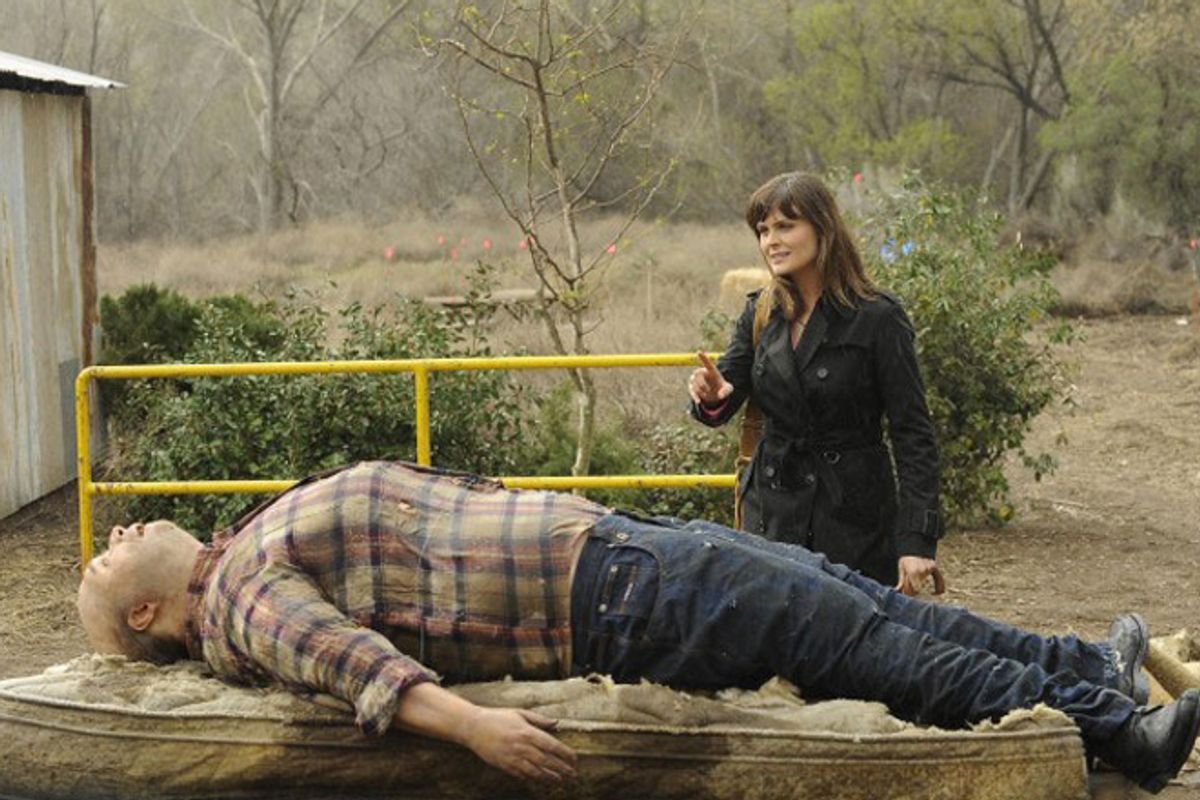 The network TV season ends this month, and with it a significant amount of carnage. There are currently 10 network shows — "Bones," "Criminal Minds," "The Mentalist," "Castle," "Body of Proof," the three "CSIs," and the two "NCISes" — that typically begin with a murder, the expected first beat in any crime procedural. This amounts to approximately 200 corpses a year, 200 dead bodies intended to entertain, to be prurient but not too prurient, disturbing, but not too disturbing. How do these shows make murder not only palatable, but a thing that millions of people want to watch after a long day's work?  In contravention of common sense, avoiding the dead bodies altogether does not seem to be an option.

The 10 aforementioned murder series can be divided into two general categories, crime-solving shows and the corpse-studying shows. Both activities take place in both, but with a different emphasis. Programs in the first category, like "The Mentalist," "Castle," "NCIS" and "Criminal Minds," have forensic scientists in the cast who can and do deliver helpful deductions about any cadaver, but the main characters mostly interview living people. On programs in the second category, like "Bones," "Body of Proof" and the "CSIs," the main characters mostly examine dead ones. The bodies in the crime-solving shows tend to be significantly less gruesome and graphic than the ones in the corpse-studying shows: The corpses may be a major plot point in both, but they're only a major prop in the latter, where they have to look the part.

"The Mentalist" and "NCIS" begin with a corpse, but rather than some goopy, dripping horror show, it tends to resemble a not too mutilated human being. ("Bones," as I'll get into later, usually leads with a corpse more likely to resemble hamburger meat than a person.) These bodies serve a relatively staid Pavlovian function: You see one, and you know what's coming next, 40 minutes of case cracking. Since the originality of the caper does not stem directly from the originality of the cadaver, standard murder — guns, stabbings and fights, as opposed to death by sky diving, motorboat or giant chocolate bar — tends to suffice. (This is not always the case: "NCIS" has done episodes about, for example, a murderer who cuts off and collects his victims' feet, but it still tends to be more straightforward about cause of death than shows like "CSI" and "Bones.")

This year "Castle" began to hew to this formula as well. In the past, "Castle," which is a more jokey, lighthearted show than the "NCISes" and "The Mentalist," had gone the over-the-top murder route — a burned-up guy found in a pizza oven; lumps of flesh stuck in the spin cycle. This year, episodes revolved around the death of a contestant on a show much like "Dancing With the Stars," a victim who had teeth marks all over his body, and a third encased in concrete, but none of them looked particularly gnarly.

Dead bodies often look horrifying on "Criminal Minds," which is about a group of law enforcement officials who track down serial killers. These serial killers, psychopaths and perverts with dark and creepy pathologies are a much more twisted bunch than the kind of kicky, oddball murderers who populate a series like "Castle," and "Criminal Minds" is a much more twisted show. On it, a number of lifeguards show up dead ... with their genitals cut off. Women show up murdered ... with their lips removed. A man in a wheelchair murders prostitutes ... with the help of his parents.

If all murder shows let the audience have its cake and eat it too, to identify with the good guy, but get the kicks of seeing the work of the bad one (or, to watch a group do-gooders help bring a victim, often young and attractive, to justice, but also to get to see her laid out half-naked in a morgue), "Criminal Minds" comes closest to tripping over this dichotomy. It regularly tangles with plots so creepy and horrible, it almost ruptures the real sanctity of the procedural watching experience: the feeling that, whatever is happening on-screen, you are safe at home.

This sensation is never a risk while watching the "CSIs," shows so fizzy about murder they are, in their way, more disturbing than "Criminal Minds," despite being much, much easier to watch. On the "CSIs" the murders are outlandish, zany and enjoyably gross: Three guys die in a car crash, and a fourth very pink brain is found with them; a woman drained of blood  is hung upside down in a haunted house; a guy gets run over by a motorboat, and the audience is treated to his ground-up throat; someone tosses body parts around Hell's Kitchen. And those are just plots from this season. In recent years the "CSIs" have done episodes about patty sniffers, food orgies and death by alligator and dinosaur. One just has to compare "CSI" to the far less successful "Body of Proof" to see how effective its jocular attitude is. "Body of Proof" is much more serious, the plots are less crazy, it doesn’t revel in its victims' wounds, and it is hardly any fun at all, and not nearly as successful.

But when it comes to taking the death out of murder, there is no show on TV as successful as "Bones." The light, jokey "Bones" is about a forensic anthropologist, Dr. Brennan, who studies, yes, bones, and who is only brought in on a case when a body is in disgusting shape. This year Dr. Brennan has dealt with a head and melted body found in plastic wrap; a postal service-ready box of red goop, packing Styrofoam and a skull; an eyeball in a toilet; a body in a terrarium full of white rats; a guy pancaked so totally to the road, he had to be spatulaed off. "Bones" has an antic, enthusiastic approach to gore — more is always better — and seems to be crafted by a horror movie and Halloween enthusiast who treats each episode as an excuse to show off his or her impressive skills with awesome and icky make-believe. Of course, to have the intended good time effect, a key change has been made: None of the bodies on "Bones" much resemble people, making it much easier to forget the box of goop in the lab was ever a person. But, as all the murder shows ably demonstrate, that's not such a hard trick to pull off.