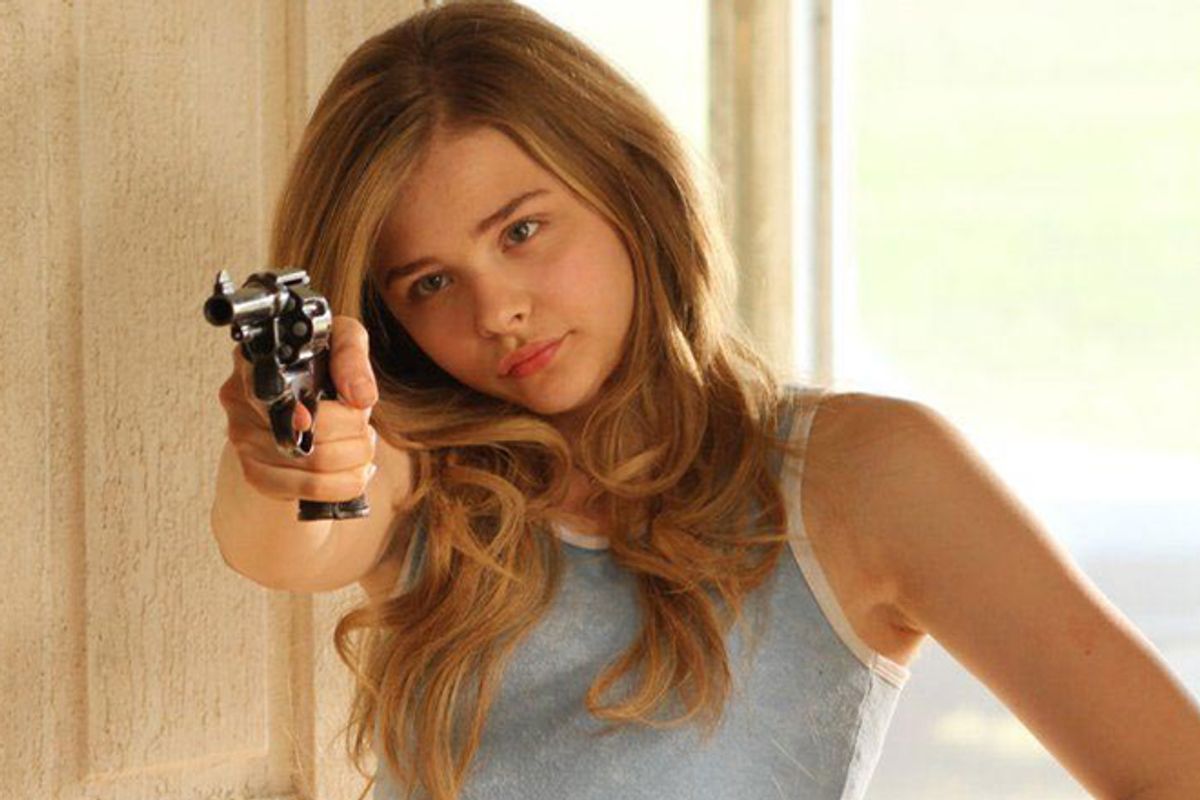 "Never work with children or animals" is an old W.C. Fields chestnut that, for a while in the '90s and '00s, everyone outside of children's entertainment seemed to be holding sacred. Child actors were off on their own in a parallel entertainment universe created by Disney and Nickelodeon, while adults held down the fort in dramas and reality shows. There were some notable exceptions, like Haley Joel Osment and Christina Ricci, but by and large, children were almost entirely absent from grown-up entertainment.

Things are very different today. Kid-targeted movies filled with teenage actors like "The Hunger Games" and the "Harry Potter" franchise have found a huge adult audience, while actors like 15-year-old Chloë Moretz (who stars in the new movie "Hick," opening this week) and the Fanning sisters are given prominent roles in serious dramas. On TV, children have become a regular part of many casts, from sitcoms ("The Middle," "Modern Family") to dramas ("Shameless," 'The Walking Dead"). Child actors, once a sign of cheesiness and unprofessional conduct, have become integral to the success of a large number of critically respected and commercially successful entertainment properties. And not only that, many of these child actors have gotten really, really good.

Think of Kodi Smit-McPhee from "The Road," holding his own next to Viggo Mortensen. Or Emma Kenny's Debs on "Shameless," capable of moving from a funny scene -- yelling "Eat my ass!" at a video game -- to the heartbreaking moments she shares with her unappreciative father, slipping him beer or covering his passed-out body with a blanket without getting any thanks. Or even Aubrey Anderson-Emmons, the new Lily on "Modern Family," only 4 years old but emphasizing the weirdness rather than the cuteness of the 2-year-old she plays. (When she was cast, other cast members talked about how good of an actress she was, which seemed strange to say about a 4-year-old, but she's proved it this season.)

The rise of the quality child actor (coming, it should be noted, considerably later than the rise of "quality" TV) can be traced to two general phenomena. One is that scriptwriters and directors figured out how to use child actors effectively, emphasizing a naturalistic style that let them fit in with their costars and lose all the groan-worthy signals that a movie was just for kids. But the other is the emergence of that very parallel entertainment universe. Nickelodeon and Disney didn't just create hugely successful TV shows and movies; they also created a reason for more and more child actors to come to California, to learn their craft and to be able to fill those new, cheese-free parts.

Why were child actors so reviled throughout the '80s? Here are some names that might jog your memory: Michelle Tanner. Jennifer Keaton. Willis Jackson. Child actors seemed either designed to run onstage and say something cute to elicit an "awww!" in unison from the studio audience, or to smirk and hack their way through the broad teen comedies filling mall multiplexes. While directors like Stephen Spielberg and John Hughes were able to elicit compelling performances from younger actors, their technique didn't seem to take and derivatives of their successes seemed to share more with the B-movies of yore than they did with "E.T." or "The Breakfast Club." (It didn't help that a lot of those "kids" were being played by adults, either.)

It's no surprise, then, that anyone backing a TV show or movie intended to be seen as serious and high-quality would do everything they could to keep kids out of it; even good shows focused on kids couldn't survive on network TV during the dead zone between the mid-'90s and early '00s, as "My So-Called Life" and "Freaks and Geeks" could attest. It's a style of acting we still see today: think poor Jake Lloyd playing young Anakin Skywalker in "The Phantom Menace" in such a cutesy way that it rendered the movie nearly unwatchable. Or most of the actors on Disney and Nick shows, for that matter. (Though at least the kids are playing themselves; previously many "teenagers" were played by adults.)

Sometime during that fallow period, though, producers figured out how to not only capture that Spielberg magic, but even improve on it. There are times (see above, or here) when the acting in Spielberg's kiddie flicks is so unaffected that it comes close to breaking the fourth wall. Young actors are now placed in fantastic situations (wizard school, vampire wars, Upper East Side prep schools) and expected to convincingly embody a real character -- and they've become very good at it.

"Over the years, the acting style has changed," said Harriet Greenspan, a casting agent and acting instructor in Los Angeles who has worked with a number of kids' shows. "It's become a lot more real. Thirty years ago, acting was acting. We look for kids that aren't acting anymore, that are more real."

The general path of child actors has always been commercials to TV shows to movies, but there was a long-standing block at that second level: There simply weren't very many TV shows child actors could work on. Most "children's entertainment" was cartoons or educational programming staffed by adults. Cable changed all that. While the first shows for tweens are generally thought to have aired on NBC during its Saturday-morning block of "Saved by the Bell" and its spinoffs, cable created a venue for kids to watch themselves acting like kids -- and, unsurprisingly, it turned out they really liked it. (Cable also created the split, in its way: If the kids were off watching tween shows, "family hour" shows didn't have to feature cute kids to get the parents to watch.) This marked an important shift in how kids were portrayed.

"Nickelodeon first came up with its 'Kids Rule' slogan quite purposefully in the early '90s," Dave Moore, a media expert at Temple University, wrote in an email. "This necessarily transformed kid actors from subservient to adult programs to perceived 'rebels' acting out against authority."

Both Disney and Nickelodeon slowly built up universes of programming and stars that spanned media from TV to music to movies, a world with kids playing kids to an audience of kids. The acting there was frequently as broad as you might have seen on any '80s sitcom, but that wasn't the important thing. "Child actor" isn't a career anyone decides to pursue; first you get a gig, and then you make a life of it. The emergence of so many more roles for younger actors created a much larger pool of actors other projects could draw from. By the time a child actor is being asked to play an 8-year-old, he or she is likely to have more experience now than ever before.

"The trend of 'grooming' child actors from a young age has probably been facilitated in an age with more media exposure sooner," Moore noted. But this has not always been a positive development.

"It's a kids' world out there," said Greenspan. "So many families are picking up their lives and moving to California because of their child's career. Of course, kids get bad advice -- they get one role and the parents pack up and move, and sometimes it's months or years before they get another gig."

Exploitation has always been a concern when it comes to child actors; while California has strict rules about how long kids are allowed to work per day, it can't control the bad decisions parents might make when their kid isn't working. Bogus "talent searches" and managers ostensibly trying to discover the next big child actor or model pop up regularly in cities small and large, and most of these are scams. Nor has the fate of child actors generally been smooth.

All that said, the return of younger characters to mainstream entertainment has been a welcome one. In the last decade, both comedies and dramas have gotten a lot better at showing us adults who are recognizable humans, not just collections of showbiz gestures assembled into a numbing whole. While that sophistication in storytelling techniques was happening, though, children were largely left out, as if adults wouldn't be interested in seeing compelling portrayals of kids (even as they cropped up in shows like "Malcolm in the Middle" or movies like "The Sixth Sense"). Now, Chloë Moretz can give us a dark comedic take on a character her age while Helena Bonham Carter does the same; Kiernan Shipka shows us how girls like Sally Draper deal with the socio-historical shifts of the '60s just as Elisabeth Moss does the same for young women; and if Chandler Riggs' portrayal of Carl on "The Walking Dead" sometimes makes you root for his death, well, he's right there alongside Dale and Lori. On the children's shows of Disney and Nickelodeon, kids have been portrayed from their own perspective for the last few decades. Now, adults are getting to see kids as real humans, too.