Has President Obama given up on Israel? The U.S. may soon give the country its biggest defense paycheck yet 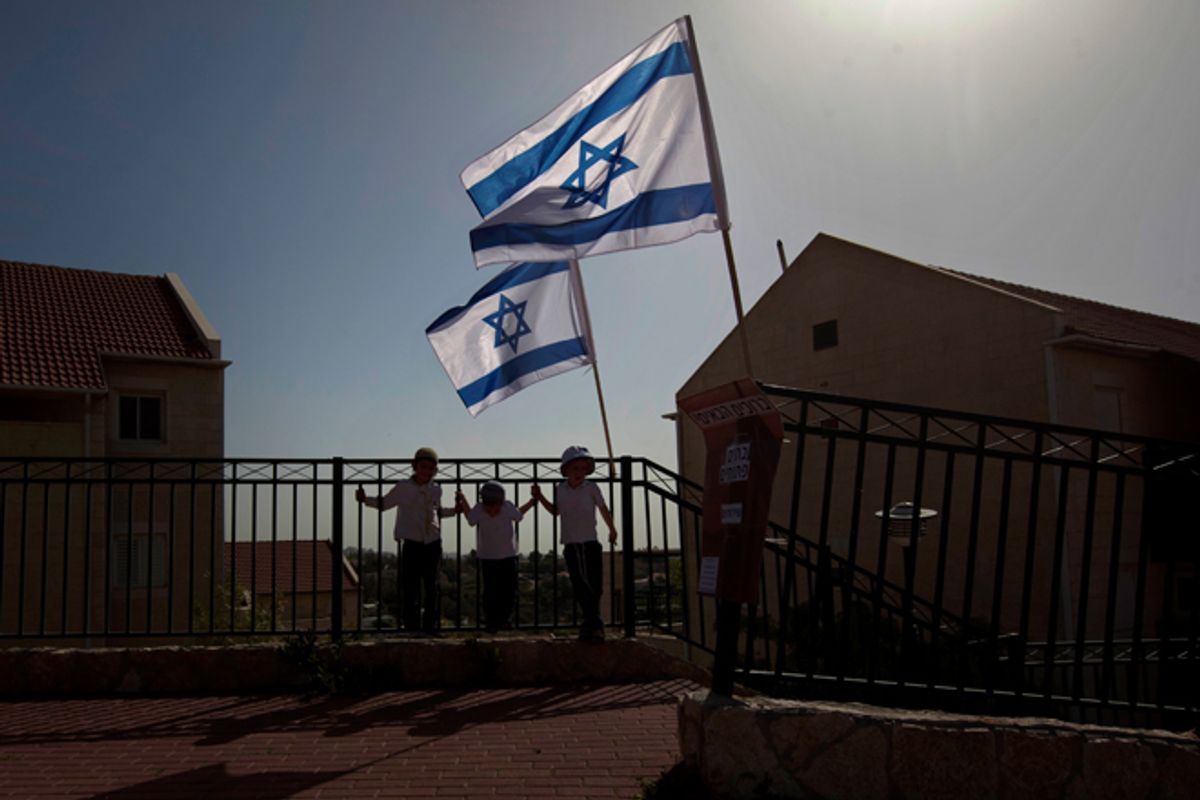 As progressives total up the ways Obama dashed their hopes for the elusive change we can believe in, there is one big, broken change-promise that no one mentions these days.

Three years ago this month, Obama met with Israeli Prime Minister Bibi Netanyahu and told him that the West Bank settlements had to cease. "The settlements have to be stopped in order for us to move forward," said Barack Obama, at his first presidential meeting with the Israeli leader. A month later, the new president reiterated the criticism, in a Cairo speech that was supposed to herald a re-boot of U.S.-Muslim relations. “The United States does not accept the legitimacy of continued Israeli settlements,” Obama said from a podium at Al Azhar. “This construction violates previous agreements and undermines efforts to achieve peace. It is time for these settlements to stop."

But the settlements have not stopped and, rather than rebuking Israel, the U.S. government is preparing to reward it more than ever before. This week, the U.S. House Subcommittee on Appropriations passed a bill handing over the most money ever in one year to Israeli defense: just shy of a billion dollars toward three Israeli missile defense projects, called Iron Dome, David’s Shield and Arrow. Last year’s appropriation for the same projects was $235 million. “I don’t know of any joint defense programs in the last 10 years -- probably no program with any other country – that has approached a billion,” said a staffer who works with the subcommittee.

In 2009, Obama’s condemnation of Israel was regarded as historic. Although the West Bank settlements have been condemned repeatedly by the UN and international community for decades, and are illegal under the Geneva Convention, no U.S. President had ever criticized them in similar language.

The response in Israel was close to hysterical, with Netanyahu assuring his religio-nationalist base that nothing the American president said would have any effect at all on the building of new settlements, or expansion within existing settlements.

The settlers themselves responded with furious entitlement, matching Fox News’ best xenophobes on the topic of the new American president’s loyalty to Hez and Allah.The Israeli government had other plans too. Before six months had passed, in November 2009, Netanyahu’s government authorized the building of another 900 buildings on disputed territory, a poke in the American eye that drew only the mildest of rebukes from the State Department.

On a reporting assignment into the West Bank settlements for Time shortly after Obama’s Cairo speech, I met settlers of all stripes, from the sane and secular to fire-eyed, Uzi-armed young men sporting dreadlock side-locks, camped on hilltops in Arab territory without plumbing and with five or six toddlers and a pregnant wife each.

Memorably, I met an American family, the Katzes, that had moved from Woodmere, Long Island, to Israel in the 1970s, settling in a fragrant suburban settlement called Efrat not far from Jerusalem. Efrat is one of the quasi legal settlements, in that it is relatively older and established and secure, a gated place where immigrants from the West don’t need to arm themselves, can find pizza parlors and the Israeli equivalent of Little League, and most of the other comforts of home, despite the fact that they must travel in armored buses to cross nominally Palestinian territory. To increase the security of all these settlers, Israel has built dozens of settlers-only highways that now criss-cross the West Bank – exclusive, paved super-highways that Palestinians sometimes lob rocks at from the donkey tracks that constitute their transportation infrastructure.

Family patriarch Israel Katz refused to shake my hand, strictly observing the Orthodox prohibition on physically engaging with a possibly menstruating unrelated female. It was a week after Obama’s Cairo remarks, and Katz was still seething. “Why should America tell Israel what to do?” he asked rhetorically. “Does Israel tell America what to do?”

Since Obama’s Cairo speech in 2009, Israeli settlement expansion has continued unabated, and in fact, accelerated. With Orthodox and extreme Orthodox Israelis (called Haredim) increasing as a percentage of the national population, thanks partly to their belief that God requires them to produce as many children as humanly possible, the need for housing grows and grows. More than 310,000 Israelis live in illegal settlements in the occupied West Bank, and another 200,000 live in a dozen illegal settlements in east Jerusalem. That fact, and pressure from all religious nationalists who conceive of Israel’s borders as the Old Testament cartographers did, means that no Israeli leader can cave on settlements, not even to an American president.

After Obama charged out of the gate against the settlements, for the United States to now reward Israel with an historic billion-dollar prize for missile defense should surprise no one. The year 2012 is, after all, an election year and, true to political form, no amount of pandering is too much, especially where Israel is concerned.

A certain segment of stridently pro-Israel American Jewry has long been convinced that Obama is “bad for Israel” – the single issue that can make or break a candidate seeking funds and votes from one powerful and politically active demographic. Perhaps a historic pile of money wins them back, perhaps not.

The near-billion appropriated this week must wend its way through about 15 more legislative gateposts before it’s actually disbursed, but those close to the bill expect little resistance. The funds will be divided up between three projects. The Iron Dome – the recipient of the bulk of the new moneys - is intended to protect Israel from the relatively low-level, cheap missiles Hezbollah lobs across the borders. David’s Sling is a short-range ballistic missile defense system, with American firm Raytheon as a subcontractor. The Arrow System is an exo-atmospheric project, still on paper, that would theoretically protect Israel from long range ICBMs, the sort that the Iranians might someday be able to make. Boeing is the subcontractor on that.

According to the Congressional Research Service, Israel is the largest cumulative recipient of U.S. foreign assistance since World War II. As of this year, the United States has provided Israel $115 billion in bilateral assistance.

Progressives complain that Obama didn’t try hard enough on health care, on the banksters, on the wars. But in those cases, at least, he tried. On the matter of the settlements, he did not.