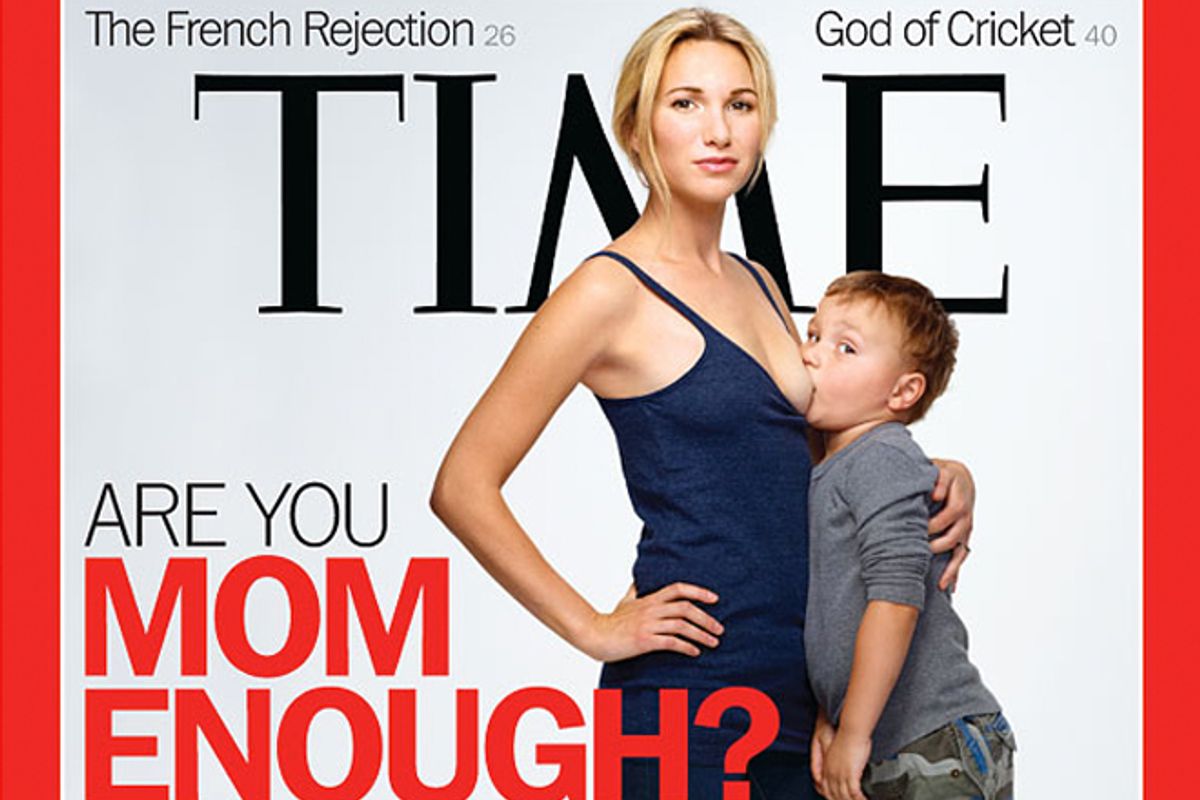 The cover of Time magazine
--

In the single, whipped-up day since Time magazine unleashed that cover story about crazed MILFs "driven" to "extremes" by attachment parenting, there's been plenty of debate over its provocative image of blogger Jamie Lynne Grumet breast-feeding her almost 4-year-old son. And, as so often happens when adults see an image that unnerves them, that anxiety is projected onto kids. In this case, one kid in particular. Grumet's.

Unshockingly, the National Review Online was quickest to leap into pearl-clutching position. After deeming the image "as bad as it will ever get," Glenn T. Stanton pronounced that "This poor boy may be diggin' life now, but will soon be forever teased as the Got Milk? boy that Time magazine and his indulgent mom made infamous." And in the Contra Costra Times, Tony Hicks decided that all the mothers who appeared in the story's photos did so "simply to have something really embarrassing to use against their kids when they become teenagers."

Most of us who live in some degree in the public space – whether it's our Facebook photo albums or the cover of Time magazine – grapple with how much of our children's lives we share. The little babies whose adorable smiles are posted swiftly turn into teens who'd like you to cut it out already, Mom. The contract that we have with our children to protect them and respect them is one that has to be constantly renewed as they grow and change. But it's not the same for any two families, and the boundaries are incredibly varied.

The complicated reality is that our experiences are entangled with those of our loved ones. A woman should have every right to write and talk and present herself to the world. But if we're going to talk about our lives, there's no way we won't be bringing our families along for the ride. That's not automatically a traumatic thing. If a child, like Grumet's, grows up in a family that's very open about itself, and the child's own nature is of that bent, he may well think nothing of it. The hang-up isn't his; it's the journalists transferring their own discomfort onto him. To assume he'll be mocked about that Time cover is to assume that the image of him breast-feeding is something to be embarrassed about, that there's something inherently wrong about it.

That's not to say that profound sensitivity isn't required. Our children aren't props for us to use to boost our careers – or even, for that matter, our Facebook statuses. They're human beings, and when they can't give consent, it's our duty to make reasonable choices on their behalfs. Would I appear on the cover of Time, breast-feeding one of my kids? I'm not sure I'd appear on the cover of Time with my kids, period. But that's my choice and my family's. Frankly, I'm way more unnerved when I see a soon-to-be ex-Facebook friend post a photo of his toddler's first poop in the big boy toilet or announce her daughter's first period than I could ever be by a woman nursing her preschooler. We've all got different boundaries.

Last evening I was at an event on motherhood and writing, and the novelist Martha Southgate spoke about how she'd written a very personal essay about her son when he was in elementary school. Now that he's 18, she wonders if she should have done things differently. And in Tablet last winter, columnist Marjorie Ingall declared that after years of chronicling her life with her family, she was giving her two daughters "the greatest gift of all: I'm not going to write about them anymore." In my own life I've moved, with each passing year, from simply writing abut my children to collaborating with them on what they do and don't want revealed about their personal lives. I'm grateful when they're generous and open with their experiences, even though I know they may second-guess that openness later.

On Facebook Thursday, Grumet wrote that "My mother posed for similar images (not as big as TIME obviously) and was a public advocate of breastfeeding. I am so proud of her and loved my upbringing." So why would her son's future mortification be a fait accompli?

None of us has a crystal ball. If we did, we'd probably still find ways of making choices that our children will be telling their future shrinks about for years. Life isn't always about what your child is going to feel when he's in college. More significantly, isn't how the child is now a much more tangible and important issue? Was Grumet's son comfortable when the Time photo was taken? Did he want to nurse then? Was he coerced? Or was he simply doing something that felt comfortable and acceptable? Was he content to pose for the photo? Because if we can allow for the possibility that he didn't give a damn when the picture was shot, who's to presume he will in 15 years?