Tuition is too damn high 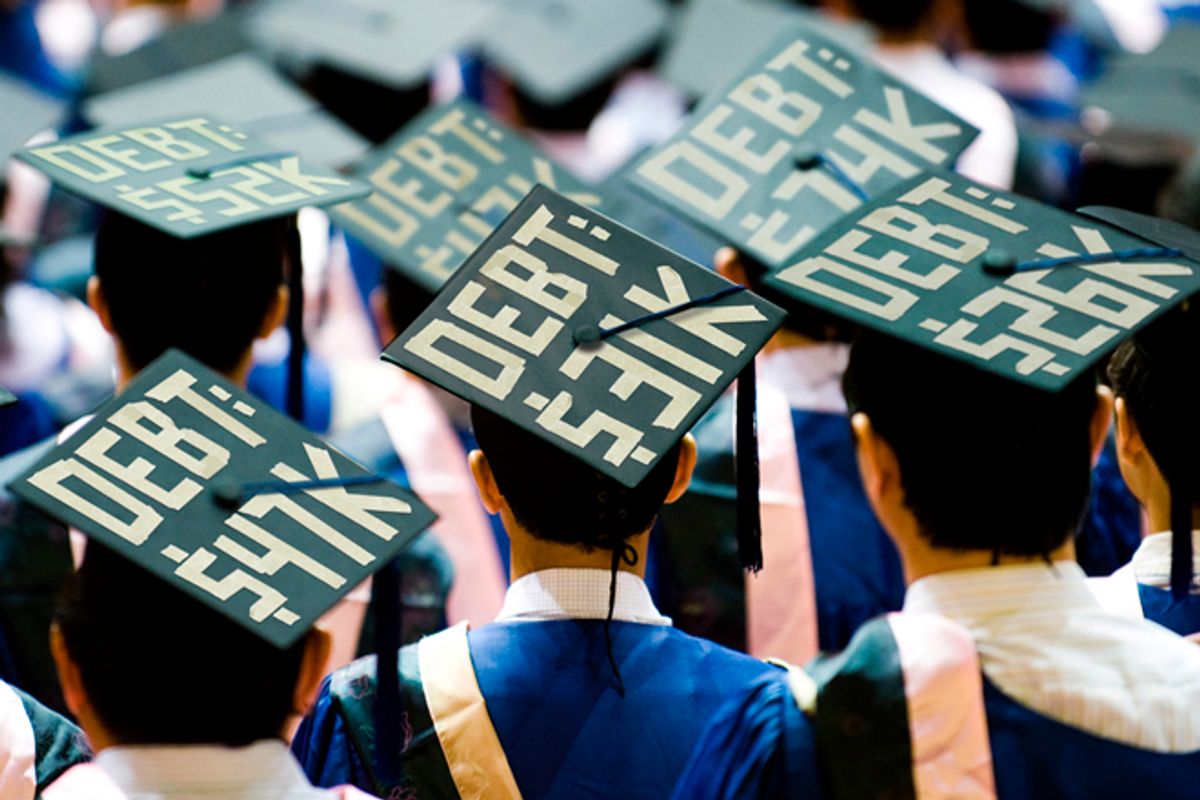 College students in California received another dreary report card on Wednesday. Unless the state boosts its funding support for the public university system, warned school administrators, another 6 percent tuition hike could be on the way as soon as next year.

The officials may have been indulging in some good old-fashioned political grandstanding, hoping to whip up support for a November vote on a tax hike endorsed by Gov. Jerry Brown. But in a state where tuition fees have already doubled in just five years, another 6 percent hike is hardly unthinkable. And as a symbol of rising costs in higher education nationwide, California's example is more than apt. Since 2001, tuition fees at four-year public colleges in the United States have risen at an annual average of 5.6 percent.

For three decades the cost of attending college anywhere -- public, private nonprofit, or for-profit, Ivy League school or community college -- has risen significantly faster than the rate of inflation. But the sharp acceleration over the last 10 years -- and particularly since the onset of the Great Recession -- has stoked a new wave of widespread anxiety over an impending "crisis" in higher education. The unrelenting cost hikes also explain why government aid for college students has become such a hot topic in this presidential campaign year. Even as the government continues to print money and throw it into the breach, the hole just seems to gets bigger. Total student debt is now over $1 trillion and rising.

In fact, for some critics, access to "easy government money" is the real problem, not the solution. No less an authority than House Budget Committee Chairman Paul Ryan, explaining why he wants to cut Pell Grants and reduce the availability of government-backed student loans, claims "there is evidence that subsidized lending contributes to tuition inflation.” Just last month, Moody's Analytics chief economist Mark Zandi told the Associated Press that government loans and subsidies don't work because “universities and colleges just raise their tuition. It doesn’t improve affordability and it doesn’t make it easier to go to college.’’

For some of these critics, the solution to higher tuition costs is to take government out of the education equation altogether; to allow the market to provide "innovative," cost-effective alternatives to old-school brick-and-mortar-style higher education. Online learning, for example, could theoretically provide students with a cheap end-around to the existing establishment. There's an intuitive attraction to this approach that crosses party lines. We've already seen the Internet wreak havoc on the music business and publishing industry by fundamentally changing the economics of content delivery. Why can't it do the same for education?

Maybe it can, and will, in the long run. But before signaling a full-scale retreat of government from the higher education fray, it's important to look a little more closely at the simplistic claim that "easy government money" is fueling higher costs. While there are certainly some sectors of higher education in which there is a clear relationship between student loans and higher tuitions, for the great majority of college students the problem isn't that the government is giving them too much money. Quite the opposite: It’s the collapse of direct government support for higher education that is the main driver of higher tuition costs.

The first step in grappling with the rise in the cost of higher education requires understanding where students go to school. There are three main categories -- public schools (which include both four-year public universities and two-year community colleges), private nonprofits (the Ivys, most liberal arts colleges, etc.), and the for-profits (Kaplan, University of Phoenix, Corinthian Colleges, aka "career schools"). Here's the key statistic: Fully 70 percent of the 19 million undergraduates and 3 million graduate students enrolled in post-secondary education in 2010 attended schools considered to be in the public sector -- by which it is meant that some portion of their funding comes directly from government.

The problem: The word "public" doesn't mean as much as it used to. Direct state support for public colleges has cratered over the past 10 years, and really fell off the cliff after the financial crisis. Yes, tuitions have risen, but not by as much as state and local appropriations for higher education have fallen. Just between 2008 and 2009, for example, average tuition revenue at public research institutions increased by $369 per student, but the loss in state and local appropriations per student was $751. Similarly, at public community colleges, tuition revenue rose by $113 per student, while appropriations fell by $488. Since the recession of 2001, tuition hikes, as exorbitant as they have been, still haven't kept pace with the fall in government support.

The bottom line: For the large majority of college students, rising tuitions have nothing to do with the availability of student loans or Pell Grants. What's happening, instead, is that the burden of paying for college that was previously provided directly by government has now been shifted onto the backs of students, in the form of crippling debt.

The picture becomes a bit more complicated when one considers private nonprofits, which don't get government support, but where tuitions have also been rising, if at a slower pace than at public schools. There's an argument to be made that one explanation for why college costs have consistently risen faster than inflation over many decades has to do with the built-in resistance that the education sector has to the kind of productivity increases that result in lower prices in other industries. You can't outsource teachers to China like you can iPhones or blue jeans. You need talent to operate a full-service college, and there's a lot of competition for the talent, and so prices keep going up. While there are some problems with this argument -- such as, do schools really need to have as many administrative personnel as teaching personnel? -- the private nonprofit sector is where this argument seems to hold mostly true. Generally speaking, the private nonprofits are more or less immune to the same market forces that result in economies of scale elsewhere. This is particularly true for elite schools, where astoundingly high tuition gets tremendous public attention. So what? If you're turning away 75 to 80 percent of your applicants, what possible reason do you have for lowering tuition? Quite the opposite: Keep hiking it! The kids will continue to apply!

Of course, deserved or not, our culture places a lot of value on a degree from an elite institution, which further maintains their ability to charge as much as the market will bear. The same is not true for the rapidly growing for-profit sector, which has burgeoned in size over the last 15 years despite not delivering much that anyone values.

One out of every 10 American college students now attends a for-profit school. And there is absolutely no question that those schools' entire business model is built on the availability of student loans. Eighty to 90 percent of for-profit revenue comes from government aid -- and it would probably hit 100 percent if not for a government regulation capping the total percentage of revenue allowed to come from government aid at 90 percent.

"It's very, very clear," says Carey. "The for-profits set their prices to whatever the maximum federal loan limit is. They charge as much money as students can borrow. "

As has been amply documented, the for-profit sector also does a horrible job of actually educating students. For-profit students are more likely to drop out and much more likely to default on the debt they accumulated while failing to get a degree.

One informative, market-based method for comparing public, private and for-profit schools, suggests Lauren Asher, the president of the Institute for College Access and Success, is to look at the "net price" charged by institutions. Posted tuition rates don't actually give a very clear picture of what a college actually costs to the person writing the check. The "net price" subtracts whatever grants are provided to the student directly by the school or government from total tuition (but does not include student loans).

The most recent data is eye-opening. The net price of attending one year at a four-year public school in 2009-2010 was $10,175. At a private nonprofit: $16,672. And at a for-profit school? A whopping $23,771. In fact, says Asher, the data indicates that in the last couple of years, the net price of attending public schools has held even and in some cases declined slightly, despite tuition hikes. Asher says that even as state appropriations plummet, schools are finding ways to cut costs and plow whatever cash they have available back into aid for low-income students. The data seems clear: If you're looking for a bargain, your best bet is still state-supported education.

So what does all this mean in the big picture? In a perfect world, the easy answer would simply be to restore direct government support for higher education. There are still clear economic rewards to getting a post-secondary school degree, making government support of education a good investment for future economic growth and prosperity.

Unfortunately, in the realpolitik of today's revenue-constrained, tax-averse governments, that simply isn't politically feasible. Way back in 1978, California pioneered the future that we all currently live in when voters passed Proposition 13 and severely restricted the ability of the state to raise taxes. As a nation, we've voted with our taxpayer wallets: We are no longer willing to fund massive direct investments in our future.

Carey holds out hope for alternative providers of education that leverage the Internet's huge advantages to provide instruction at low cost. Although some of the for-profits, most famously the University of Phoenix, have already been conducting classes online for years, they aren't doing so with the goal of lowering costs for students, but rather to maximize their own profits. They're essentially exploiting the Internet to deliver product as cheaply as possible on their own bottom line, but charging top-line prices to consumers that force massive borrowing.

There's a clear role for government to play here, says Carey, both in restricting the abuses rampaging through the for-profit sector and in realigning incentives that constrict student and educational facility flexibility. For example, he notes, you can't get a student loan to take a single calculus course from whichever professor might specialize in delivering the best online calculus course in the world. There's no current way to get government aid for mixing and matching credits from different educational providers that can ultimately be assembled into a full degree.

Carey points to new, free online education initiatives from MIT, Harvard and Stanford that promise to revolutionize the education business by offering high quality at extraordinary low costs. These elite institutions pose no threat to their own operating model -- there will always be plenty of students seeking the validation of a brick-and-mortar degree from Harvard, but they carry massive potential to destroy, or at least severely constrain, the for-profit model of education. We may one day look back at the current era and wonder how in the world the for-profit schools ever got away with charging such huge fees. And of course you won't need a student loan to pay for a free online circuit engineering course put together by MIT.

How close that future might be is anyone's guess. For now, you can't get a transferable college credit from the MIT/Harvard initiative -- exactly the kind of problem government needs to help solve. But for now, as Republicans and Democrats continue to squabble over how to pay for low interest rates on student loans or how much money to put into the Pell Grant program, we should remember that the real story here isn't how much students are borrowing, but how little government is doing to help.