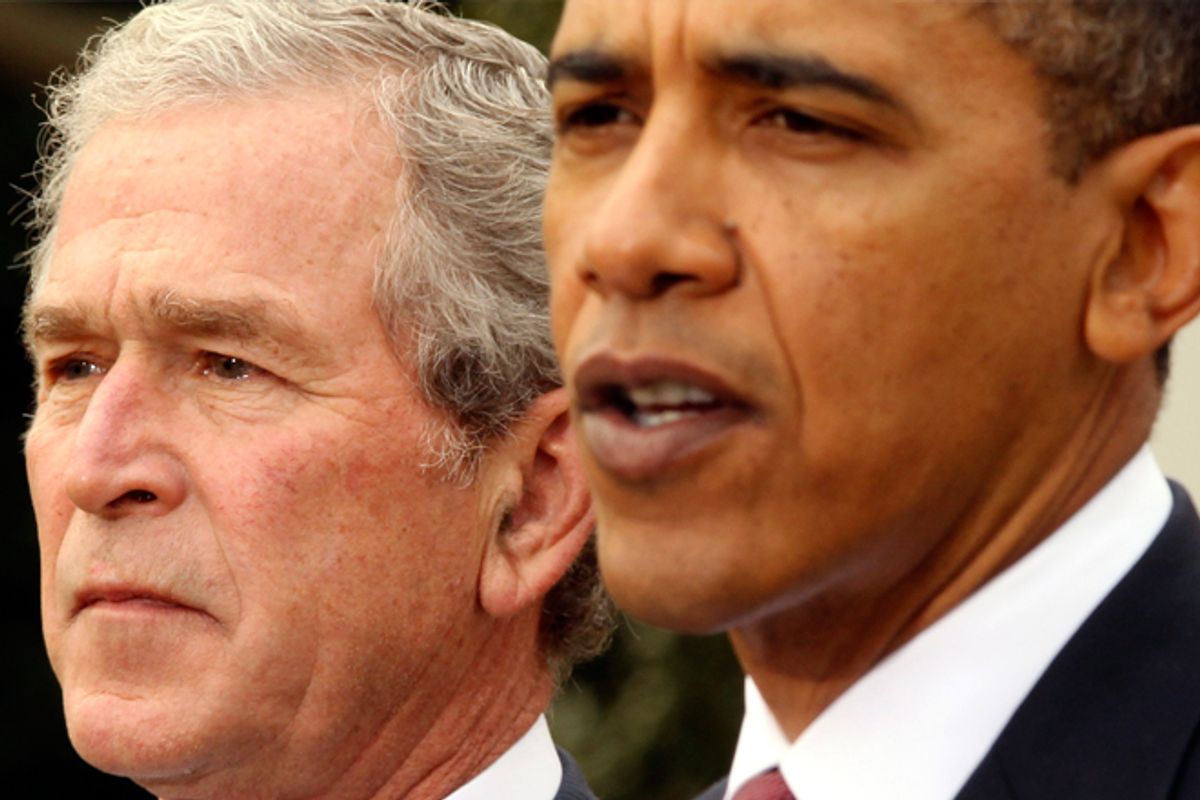 Barack Obama’s presidency was born from nothing so much as his repudiation of George W. Bush’s administration — its policies and politics, its style and tone. One of Obama’s most effective 2008 stump speech refrains was his promise to end the era of “Scooter Libby justice, ‘Brownie’ incompetence and Karl Rove politics.”

But the political dynamics for winning a second presidential term often differ markedly from winning the first. So don’t be surprised by many eerie parallels between Obama’s 2012 reelection bid and Bush’s 2004 campaign. The president may not rely upon “Karl Rove politics” in the strictest sense, and nobody would confuse David Axelrod with Rove. But Obama’s reelection route and rhetoric may bear more than a few Rovian hallmarks.

Now that Mitt Romney has won the Republican nomination, two key features prevail over the 2012 campaign — and both were also plainly evident in 2004. First, the incumbent president’s reelection fortunes are far from certain; and, second, the incumbent faces a decent but nevertheless weak challenger who is further hampered by internal problems within his party’s coalition.

Because incumbents can’t run for reelection promising “change,” and because “hope” during a lingering recession was also off the menu, the Obama campaign’s 2012 theme of  “forward” — a word that often follows “plow,” mind you — was the best available alternative. That said, and substituting the economy for terrorism, Obama is implicitly if not explicitly advancing the same theme Bush did in 2004: America suffered a tough blow, but the situation could have been worse and, more to the point, under my stewardship the nation is steadily regaining its footing.

This counterfactual campaign theme — vote for me not because of what happened, but what might have but didn’t — is a common thread for Bush and Obama. It’s not an uplifting message, but it sufficed in 2004 and Obama is counting on it working again in 2012.

Politics 101 further dictates that when an incumbent’s reelection is in doubt, he must go negative against the challenger. Obama political operatives in the White House and at the Democratic National Committee long ago made it abundantly clear they were willing to do just that. Team Obama may not go negative against Romney to the degree the Bush camp did against John Kerry in 2004. (By mid-summer 2004, 75 percent of Bush’s TV ads were negative attacks on Kerry.) But don’t be surprised if attacks on Romney’s record and even character are plentiful, harsh and relentless. In 2008, America saw candidate Obama’s toothy grin; four years later, expect to see President Obama’s fangs.

Expect the Obama camp to emphasize two major critiques of Romney: that he is a flip-flopper willing to say anything or reverse any position to win; and that he is an economic royalist whose personal and public life suggest a person incapable of understanding the lives and struggles of average Americans. Again — note the unusual parallels with 2004.

Although Romney is a Republican former governor and Kerry was at the time his state’s Democratic junior U.S. senator, the two Massachusetts pols make for similar targets. Each man is an extraordinarily rich preppie and Ivy Leaguer. Each represents the liberal wing of his respective party. Each has shown a propensity for ruining an otherwise valid point with sloppy, backfiring language. And each has a reputation for lacking political spine.

The flip-flop frame is candidate character assassination of the first order. Like the lone negative number in a string of multiplied positives, the critique that nobody can trust any statement or claim made by a politician has the potential to negate every accomplishment or promise. If it sticks, it can be fatal, as Kerry learned in 2004.

Obama and the Democratic National Committee know their electoral history and, sure enough, last November — a year before the election and two full months before a single Iowan had caucused — the DNC released a four-minute “Mitt vs. Mitt” ad and its accompanying website with the damning tag line, “the story of two men trapped in one body.” The site is a brilliant homage to the Bush campaign’s 2004 windsurfer attack ad and the devastating, 11-minute ad the Republican National Committee produced chronicling Kerry’s “evolution” on Iraq.

And then there is what might be called “the Willard factor”: Romney as Richy Rich, the Monopoly Guy with the Bain Capital background and the Swiss bank account. His bio would be political gold to Romney’s opponent any election cycle, but it’s gold-plated platinum in the first full presidential campaign following the biggest economic crisis since the Great Depression, the rise of the Occupy Wall Street movement, and the long overdue national debate over income inequality.

Again, the wealth-personified line of attack mirrors the out-of-touch, Martha’s Vineyard yoke the Bush team put around Kerry’s neck in 2004. Right on cue, in the first public event of his reelection campaign, last week Obama attacked Romney by name and invoked the economic disconnect card with relish. “He sincerely believes that if CEOs and wealthy investors like him make money the rest of us will automatically prosper as well,” said Obama of Romney, adding that “corporations aren’t people - -people are people.” (For the record, Kerry is actually wealthier than Romney, who would become one of the richest men ever to occupy the White House, should he win.)

Obama will also try to shift the national debate toward areas of strength, as Bush did. Historically, this meant the same strategy, but with inverse implications for each party: The so-called mommy party Democrats would encourage voters to focus on more favorable kitchen-table economy issues — healthcare, jobs, education — and away from less favorable “daddy party” Republican issues surrounding foreign wars abroad and culture wars. Because Obama is net-positive in foreign policy approval and net-negative on the economy, rather than mirroring by inversion, Obama will try to duplicate Bush’s shift-in-emphasis in 2004. GOP complaints that Obama is politicizing the killing of Osama bin Laden reveal Republican fears that Obama is going to play the terrorism card in 2012 just like Bush did eight years ago.

The 2004 parallels extend beyond message. Obama will be amply resourced and enjoy a field technology by virtue of his campaign’s state-of-the-art Web, donor, volunteer and social media innovations. Remember the Bush reelection campaign’s vaunted “72-hour” voter turnout model? That seems like an Edsel compared to the Ferrari the Obama team will be sporting this summer and fall. Among the perquisites modern presidential incumbents enjoy is the option to test-drive the best mobilization machines before anyone else.

Finally, what most connects Obama 2012 to Bush 2004 is the stability of the electoral map itself. Only three states — two net to Bush — flipped from one party to the other between 2000 and 2004; only nine states flipped between 2004 and 2008. Split the difference and a good, back-of-the-napkin over-under for number of states likely to flip between 2008 and 2012 is six. And thus, like the lead sailboat during a windless race, Obama doesn’t need or want conditions to change much from 2008: He merely has to replicate the map that swept him into office, with the burden of figuring out how to shake up the Electoral College falling to Romney, just as it did for Kerry against Bush. Even Karl Rove’s mapping of the 2012 election concedes this reality.

The 2008 election was memorable; to borrow the title of one best-selling chronicle, it was a “game changer.” But 2012 will not be. In many respects, it will be a game repeater, with Obama playing Bush to Romney’s Kerry of 2004. The president may be asking Americans to look “forward” in 2012, but the best preview of his reelection campaign can be found by looking backward eight years.