"The Aleppo Codex": The bizarre history of a precious book 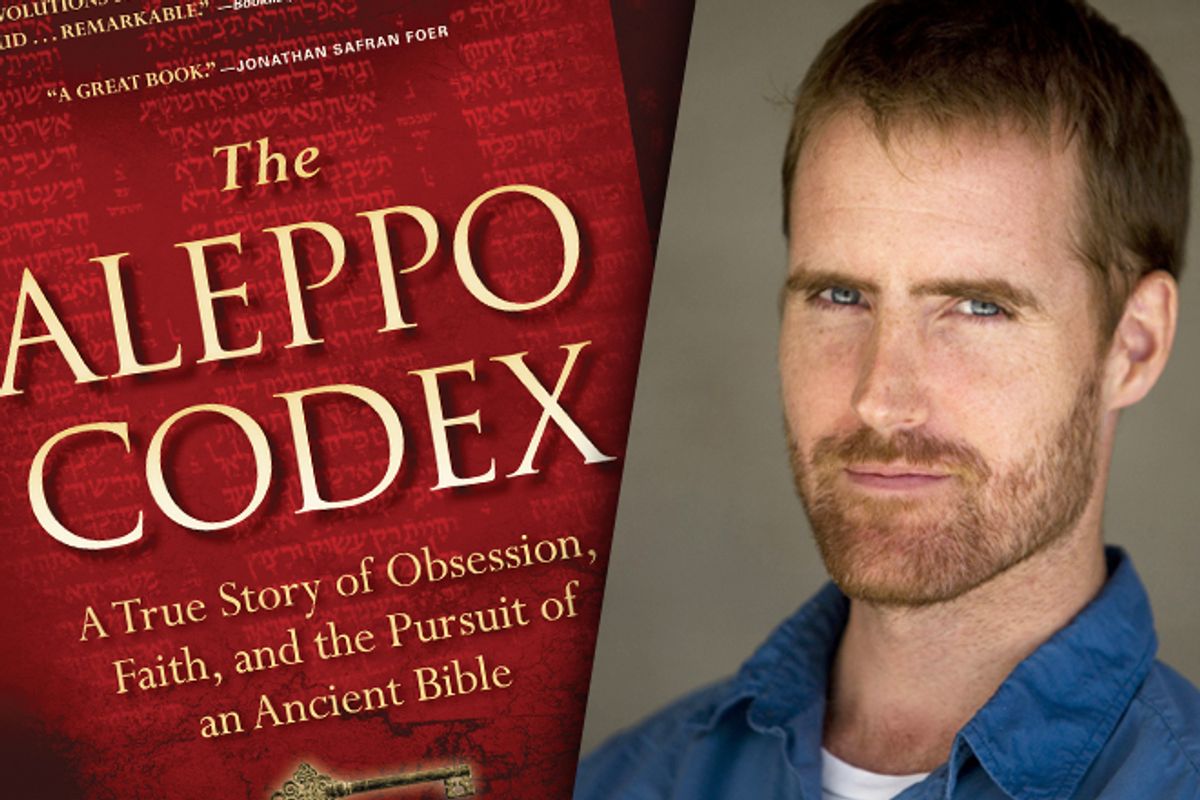 An ancient and priceless book, a murky history of evasions and coverups, an underground of sinister and possibly violent dealers, a former spy who drops tantalizing hints and a wily 84-year-old millionaire who says stuff like, "The problem with this story is that it could damage your health": Are these the ingredients for a cheesy, improbable historical thriller? Yet "The Aleppo Codex," Matti Friedman's account of his attempts to learn the history of one of the world's most precious books, sports all of these assets, and it's nonfiction. If reporting this story damaged Friedman's health, it probably happened when he realized what he'd stumbled into and his reporter's heart started beating in doubletime.

The Aleppo Codex is the most authoritative version of the Hebrew Bible, produced in the 10th century by the great rabbi Aaron Ben-Asher and the scribe Shlomo ben Buya. Friedman, who lives in Israel and has covered the Mideast and the Caucasus for the Associated Press and other publications, explains that the codex's significance to Jewish faith and identity is more than symbolic. As a people scattered across the globe, "instead of being bound by a king, a temple, or geography, [Jews] needed to be bound by something else, something portable. What emerged was the idea that a people could be held together by words." Yet in the centuries before printing, when words were transmitted orally and by copyists, it was all too easy for mistakes and variations to creep in, and "Jews could not be held together by a book if they were not reading precisely the same one."

The codex was the perfect version of the Bible, a sort of atomic clock of Judaism, and intended to be the model for all subsequent copies. Its early history was fraught: captured by Crusaders in the fall of Jerusalem, ransomed by the Jewish community in Cairo and consulted by the fabled sage Maimonides, it was eventually taken to the Syrian city of Aleppo. There, it resided for half a century. Although it was well-cared-for by Aleppo's Jewish community, it had come to be revered as a relic or treasure; few were allowed to see it and no one was allowed to copy it.

All that changed in 1947, when the establishment of the state of Israel by a United Nations resolution led to unrest in the Arab world and the harassment and persecution of Jewish communities in Muslim nations. In Aleppo, this took the form of riots and the sacking of the synagogue. The codex -- commonly referred to as the Crown -- was supposed to have been consumed in a fire set by the mob.

It was not, and in 1958, the Crown was smuggled into Jerusalem by a cheese merchant who was one of the few Syrian Jews to receive official permission to emigrate to Israel. Friedman became interested in this "lonely treasure and millennium-old traveler" in 2008, when he decided to write an article about it. He imagined the piece would be "an uplifting and uncomplicated account of the rescue of a cultural artifact," but what he discovered instead was a thicket of conflicting reports, missing records, puzzling omissions, stonewalling officials and obsessed amateur sleuths.

The mysteries surround not the ancient history of the book, but what happened to it between 1947 and the mid-1970s, although even establishing where things got dodgy proved to be a challenge. Friedman relates each piece of the story as he untangled it himself, and part of the pleasure of "The Aleppo Codex" is getting to tag along on the heels of a real-life investigative journalist as he does his detective work. Those years spent writing wire copy have not eroded the author's eloquence, either, as the book's headier touches attest: "Down in those streets, the stores now shuttered, the women of the manzul were receiving clients, and the men were submerged in cafe smoke like deep-sea divers, tubes between their lips, inhaling the rose-scented oxygen of water pipes."

While the official story simply states that the Crown was presented to the president of Israel, Itzhak Ben-Zvi, upon its arrival in Jerusalem in 1958, Friedman unearthed evidence that this was no simple handoff. Most of the Jewish community of Aleppo had immigrated to Israel, and their rabbis insisted that the Crown was supposed to have been delivered to them. The cheese merchant maintained that the rabbis still living in Aleppo, the ones who had passed him the book, told him no more than to give it to "a religious man." (The Syrian government prevented communication with the Jews in Aleppo, so his story could not be confirmed or disproved.) The Aleppo rabbis decided to take their complaint to court.

This dispute embodied major tensions within the newly formed state. The Aleppo rabbis had presided over what was, as Friedman writes, "an old community by the time Roman legions destroyed the Jewish temple in Jerusalem in AD 70." The Israeli leadership, "largely secular European socialists," did not strike the Aleppo Jews as "representing the entire Jewish people." Why should these interlopers be allowed to appropriate a book that had been the focal point of Aleppo's venerable Jewish community for half a millennium?

The codex lawsuit was also a dramatic example of what Friedman describes as a "largely untold story" concerning the migration of the Jewish Diaspora to Israel after the formation of the state. Along with the movement of people, there was also a "great migration of books." Jews from all over the Muslim world were forced to leave neighborhoods their families had inhabited for centuries. Not only did distinctive local cultures vanish overnight, but so did many of their treasured texts, left at docks and airstrips with the promise that they would be forwarded on to their owners in Israel, and then never seen again. Well, not exactly never: Some of these books and scrolls turned up later in state archives and even in booksellers' shops.

If that were all there was to the story of the Aleppo Codex, it would be fascinating (and dismaying) enough, but after wrestling with the shadowy story of how the Crown got to Jerusalem, Friedman turns to a second and even more disturbing question: Where is the rest of it? About 200 pages, some 40 percent of the Crown, are missing. These are the most important parts of all: the first five books of the Bible, also known as the Pentateuch and the Torah. Again, the official story holds that portions of the Crown were burned in the 1947 fire, but this has since been disproved. A couple of single pages have been found in places as far-flung as Brooklyn, N.Y., where they were carried around by Aleppo old-timers as good-luck charms. The bulk of the Torah, however, remains MIA.

This is where Friedman's investigation gets especially lively, as he consults with a former Mossad case officer and secretly records an impromptu interview with one of the dozen or so men rich enough to have bought the missing pages. Supposedly, this collector and his daughter were approached by two dealers with a briefcase at a Jerusalem book fair in the 1980s. They were shown an old codex identified as part of the Crown, but the collector says he refused to buy it because the price was too high. One of the dealers later turned up dead in a Tel Aviv hotel room registered to a man who didn't exist.

Friedman has his suspicions about the collector's story: Would this man really consider $1 million too much to pay for a supposedly priceless text? He devotes most of his energy, however, to getting to the bottom of who is responsible for ripping out the heart of the Crown and selling it on the black market. As he settles on three likely culprits, "The Aleppo Codex" builds to a moral crescendo more impressive than the climactic fight scene in any thriller. "A volume that survived one thousand years of turbulent history was betrayed in our times by the people charged with guarding it," Friedman writes. "We might file this tale between Cain and Abel and the golden calf, parables about the many ways we fail."

Books Editor's Picks History Israel The Bible What To Read